Tuesday September 4th… Dear Diary. The main purpose of this ongoing post will be to track United States extreme or record temperatures related to climate change. Any reports I see of ETs will be listed below the main topic of the day. I’ll refer to extreme or record temperatures as ETs (not extraterrestrials)😊. Here is today’s main climate change related topic:

From global warming 101 we know individual months and seasons for countries and territories will tend to be warmer than prior climatological averages. Arid areas will get even drier while wetter areas will become more soggy. The United States will be the poster child for this trend in September. Today a very large, warm ridge for this time of the year is stalling a front in the Midwest causing flooding. Once Gordon makes landfall tonight moisture will move northward from the mid-Mississippi Valley highly exacerbating the situation. Historic flooding is not out of the question the next several days on the western periphery of the heat dome across the central U.S. Here were NWS advisories from today:

Record heat is expected at a few locations in the Northeast where heat advisories are in effect.

Here is the current 500 millibar pattern across North America:

This is a highly unusual pattern. The first thing that stands out is the near 597 decameter ridge centered over the mid Atlantic area. A more subtle aspect is the warm anomalies pinching the jet across northern latitudes. By 240 hours out what do we see? Let’s take a peak at the operational GFS:

Being 240 hours out the above panel probably won’t verify exactly, but it shows an overall trend.

It’s no wonder that the NWS has this forecast for September 2018:

Met models are forecasting near mid July warmth aloft over the CONUS at least through mid September. Here is the corresponding EURO model:

The really good news here is that all models have backed off on Florence making a U.S. landfall. We can’t quite write the thing off until it gets north of Bermuda, though (or until we see model consistency).

So, the main issue will be what Gordon brings to the central states. After making landfall as a borderline tropical storm/cat. 1 hurricane here is the best info for flooding, which will be the main issue for the system:

Despite swift forward speed now, #Gordon will still drench Gulf coast today and tomorrow with flooding rains in addition to the storm surge. Then it slows down inland, and serious flood risk extends throughout Arkansas into Fri morning.  Here is Wednesday flood risk from @NWSWPC: 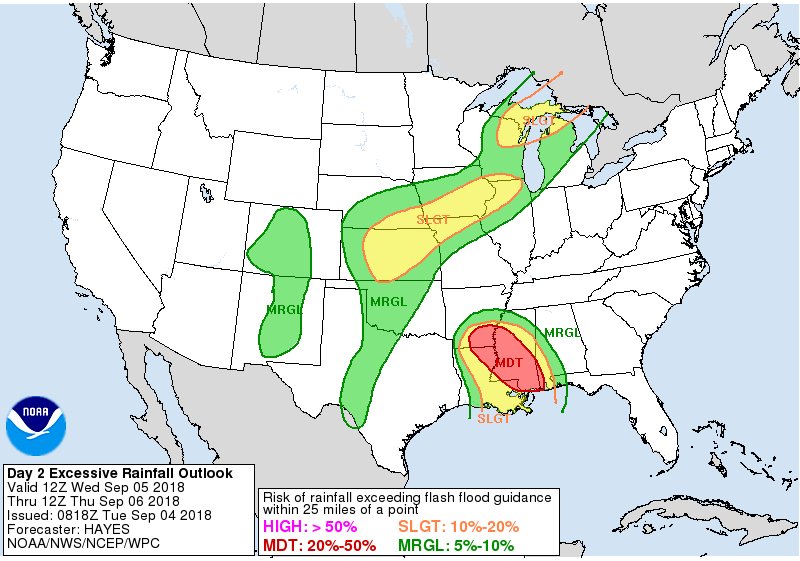 10:03 AM – 4 Sep 2018
Just like we saw last year with Harvey a strong upper ridge will slow Gordon down once it makes landfall later this evening. The dynamics in association with Gordon’s circulation will interact with an extra warm and juicy atmosphere to produce copious amounts of precipitation. It remains to be seen if there are historic amounts. At least Gordon will crawl forward and not stall, so ridiculous totals in excess of 40″ like we saw with Harvey are not forecast. My friend Bob Henson goes into greater detail about the potential for devastating flooding here:

Gordon will strike the central Gulf Coast on Tuesday night–and then go on to drop a multi-day swath of torrential rain all the way to the Midwest https://bit.ly/2oDSIEV 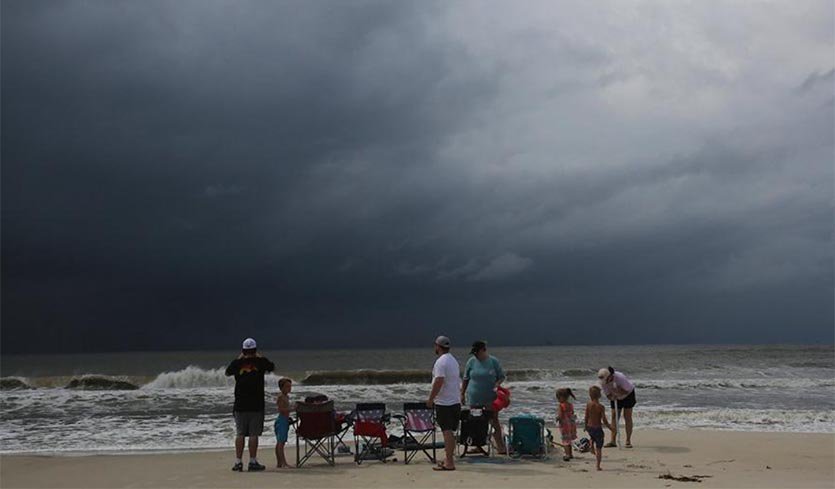 “Gordon will likely be one of those tropical cyclones whose impact in the days after landfall is greater than during landfall. Gordon is expected to dump widespread 4” – 8” rains along a swath roughly 50 – 100 miles wide from the Mississippi/Alabama coast to the Arkansas/Mississippi border. Totals near the coast could exceed 12”, and similar amounts could occur over or near Arkansas by Thursday or Friday. At that point, moisture from Gordon will be sweeping northward into the Midwest, which has been hard hit by multiple heavy rain and flood events over the last several weeks.”

“Models suggest that Gordon’s remnants could dump very heavy rains on Friday and Saturday along a convergence zone expected to lie from northern Missouri to northern Ohio, and eventually into upstate New York. The exact placement of this band may shift north or south as the situation unfolds. In short, significant flood impacts from Gordon and its remnants will be a possibility throughout the week ahead.”

“Any rainfall from Gordon’s remnants will only exacerbate an already troublesome setup in the Upper Midwest. The NOAA/NWS Weather Prediction Center (WPC) has placed parts of southeast Minnesota and central Wisconsin under a high risk of excessive rainfall from Tuesday night to Wednesday afternoon. (This is separate from the high-risk areas for tornadoes and severe thunderstorms issued by the NOAA/NWS Storm Prediction Center.) Heavy showers and thunderstorms could drop 3” – 6” over large parts of the outlooked area, with some local amounts perhaps rivaling totals one would expect just once every 100 years on average. Some parts of southern Minnesota and central Wisconsin received 2” – 4” from Monday into Tuesday, and 10” – 15” has fallen over parts of southern Wisconsin in the last 30 days. See the weather.com writeup for more on the flood threat in this region.”

Here is a little good news in association with soil moisture:

SPoRT’s version of the @NASA_LIS shows that shallow soils are moistening near the Gulf Coast (left), but deep-layer soils are fairly dry within predicted path of Tropical Storm #Gordon (right).

I will continue to add both heat and rainfall reports to this post and site as the week continues.

Tomorrow we will see more near record warmth and high humidity in the Northeast:

The rest of the country, as would be expected, will see tolerable heat levels.

Here is some climate related news from today:

The August global SST was the 5th warmest (August) on record (since 1855). The fever has broken, but the trend marches on. #ERSSTv5.

It was not very fall-like in the East today. The Upper Midwest had very pleasant temps.