Tuesday September 5th… Dear Diary. The main purpose of this ongoing post will be to track United States extreme or record temperatures related to climate change. Any reports I see of ETs will be listed below the main topic of the day. I’ll refer to extreme or record temperatures as ETs (not extraterrestrials)😊. Here is today’s main climate change related topic:

The 00Z models, including ensembles, were quite a fright last night threatening the East Coast of the United States with Florence, which has become the first major hurricane of the 2018 Atlantic season. It’s still possible that Florence will avoid the U.S. entirely, though. Everyone from experts to weather novices, including the old Climate Guy, are falling all over themselves striking a balance with communication, not trying to be overly alarmist with any threat for the public on social media. Weather models as of 2018 are free to access by all on the Internet, which anyone can interpret. Experts because of their education and experience are still needed, though, to guide the public and anyone else looking at raw information on line.

Each year since I have looked at met models starting in 1982 guidance has been getting better giving everyone more lead time. Initially during the 1980s relatively new models like the old Barotropic Model or Nested Grid Model were pretty bad, which is one reason Dr. John Hope, The Weather Channel’s first hurricane expert and a stupendous forecaster for his time, pegged Hugo to slam into Myrtle Beach instead of Charleston only about 12 hours before making landfall. Now models have advanced such that there are many days of lead time, as was the case with Sandy in 2012 in which the EURO model correctly forecast a landfall in the Megalopolis area. Given scientific advancements with guidance what is the best way to communicate threats so that on one end of the spectrum people don’t become complacent and on the other end overly frightened?

This question needs to resonate around the craniums of all disseminating climate change information, as well. One debate going on among climate communicators is whether or not to state that civilization through hard work will survive the climate crisis given time to make adjustments; thus perhaps making people too complacent, or whether to state that too many tipping points will be crossed such that we get conclusions leading to dystopian articles such as this, which may scare folks towards inaction:

The best climate communication policy may not be one of caution, but let’s not throw up the public’s hands in dismay.

Let’s take Florence as the guinea pig for this discussion. The first thing I and most more seasoned experts look at about ten days before any potential landfall in association with a Cape Verde system located far east in the Atlantic is model consistency. Obviously the more consistency the more lead time for a better forecast. Comparing last night’s and the more recent 12Z operational model there is no consistency. Here is the GFS  “fantasy model (one past 240 hours out)” from last nights model run, which would spell an absolute disaster for New England:

Now here is this morning’s GFS model valid for about the same time:

On the above panel we see a forecast that is much faster with Florence and way out to sea. The operational 12Z WED GFS had no U.S. landfall. Is today’s fantasy model correct? Maybe and maybe not. We just don’t know due to model inconstancies more than 240 hours out in time. Of course, the European Model has proven to be superior over the last couple of decades, so most use that for guidance.

What can we forecast with any reasonable degree of accuracy going into the second week of September? We can communicate that there will at least be large ocean swells and rip currents since Florence should get close enough and be prolonged enough for these effects. Should we tell the public that an East Coast landfall will occur or that Florence will miss the United States at this juncture? Absolutely not. What most are presenting now is “plausible speculation.”

In conclusion, met and climate communicators from different backgrounds have a great responsibility. How they go about doing their job is very much a grey area. Speculating about the future of such entities as Florence can be fun and interesting, but merely just that…pure educated speculation beyond seven days. Most of us don’t have enough training to “out think” highly sophisticated met models, being able to point out where exactly computers are erring. The atmosphere is an extremely complicated entity, but science will in time unravel more of its secrets both in the world of meteorology and climatology for better, truthful communication.

Today I will be posting more model information on Florence and other tropical entities as I see them come on line:

The setup around #Florence remains fascinatingly complex, but can be annotated. The first “inflection point” occurs Sun PM, when a passing trough provides a northward escape route. If she misses, chances of Eastern US impacts increase as a ridge blocks her to the north. #tropics pic.twitter.com/WGVbueWLre

The strengthening of Hurricane Florence in the face of (seemingly) hostile conditions has been remarkable. Yesterday, the NHC forecasted weakening. Today the thing is near cat 4 strength. We have a ways to go before we can more accurately forecast hurricane intensity. #nbcct pic.twitter.com/qcbYKjFZlN

Against all expectations, #Florence has become a major Cat 3 hurricane in the open Atlantic. Dr. Jeff Masters examines its potential to target Bermuda and the US East Coast. https://bit.ly/2wPexG1 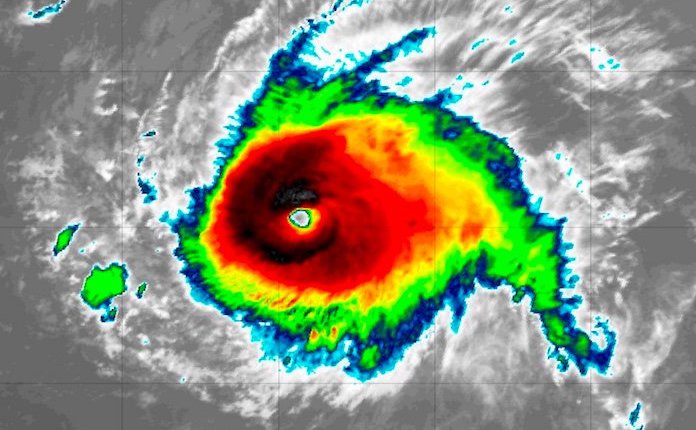 Yet another system is brewing in the tropical Atlantic, and it may threaten the Caribbean next week https://bit.ly/2wK8vFY 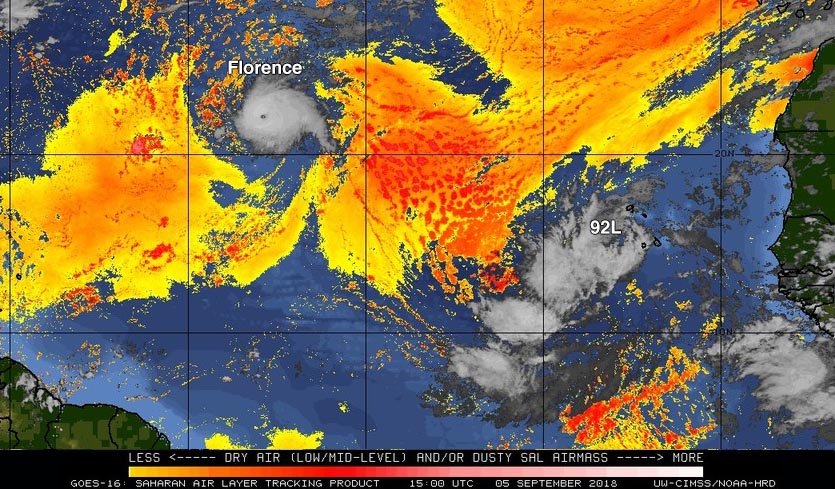 On Thursday more near record heat will occur in the Northeast:

While warm to hot most other locations temperatures will be tolerable.

[TOMORROW] Heat indices will be near 100°F due to high temps in the 90s and dew points in the low 70s. Save lives by knowing the signs of heat stroke and heat exhaustion! #BeatTheHeat 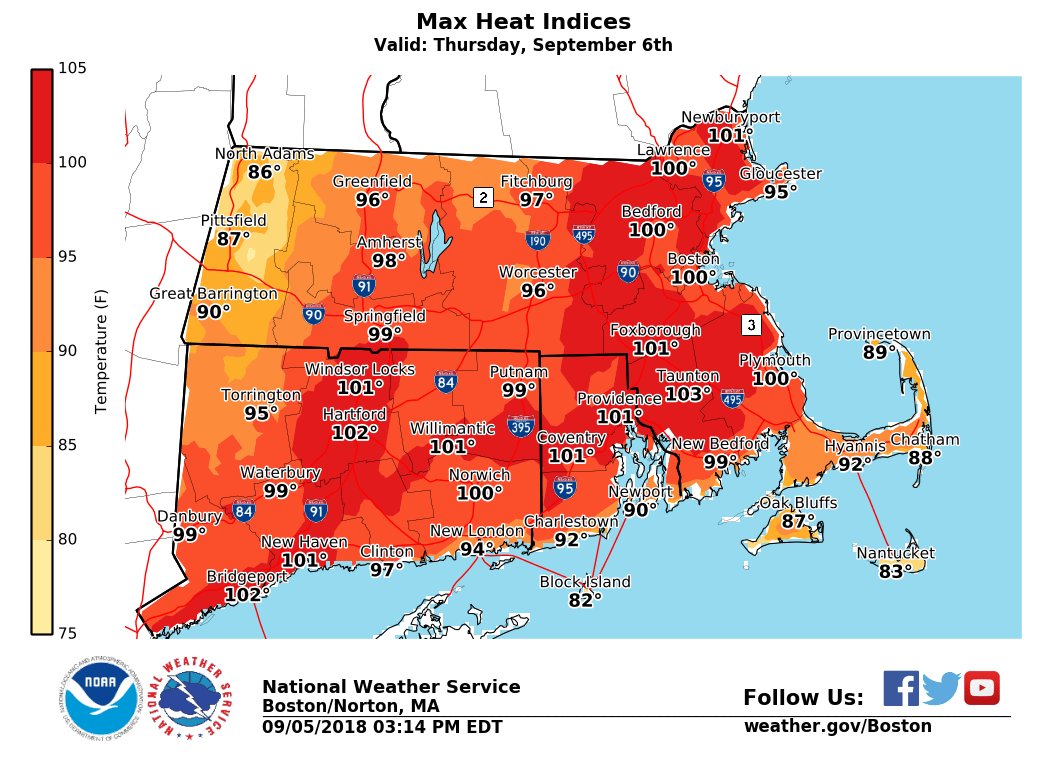 Today for #EMSAnnual2018, I spoke about Berkeley Earth’s daily temperature data set and explored some of our results for Europe.

Here is a history of the average number of new daily record highs and lows per location per year in Europe.  1/ 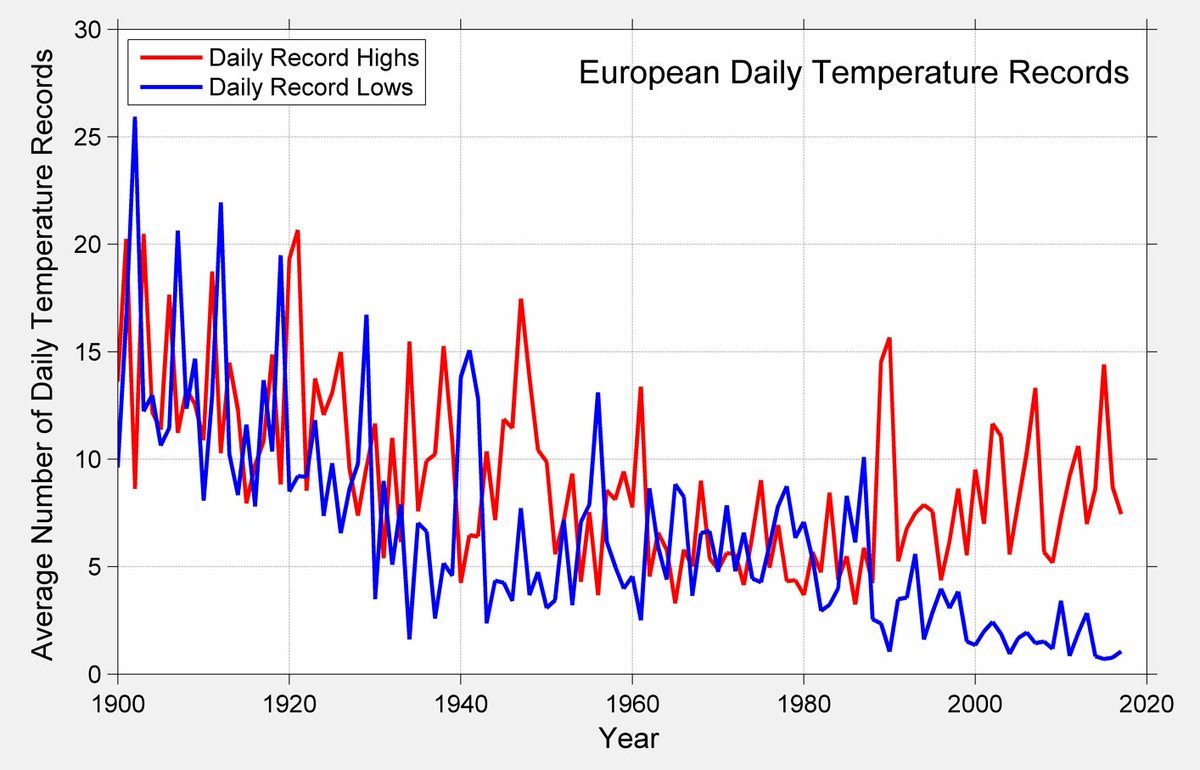 One of the hottest July through August periods across Southwest California since records have been kept. #cawx #Socal #LAheat #LAweather 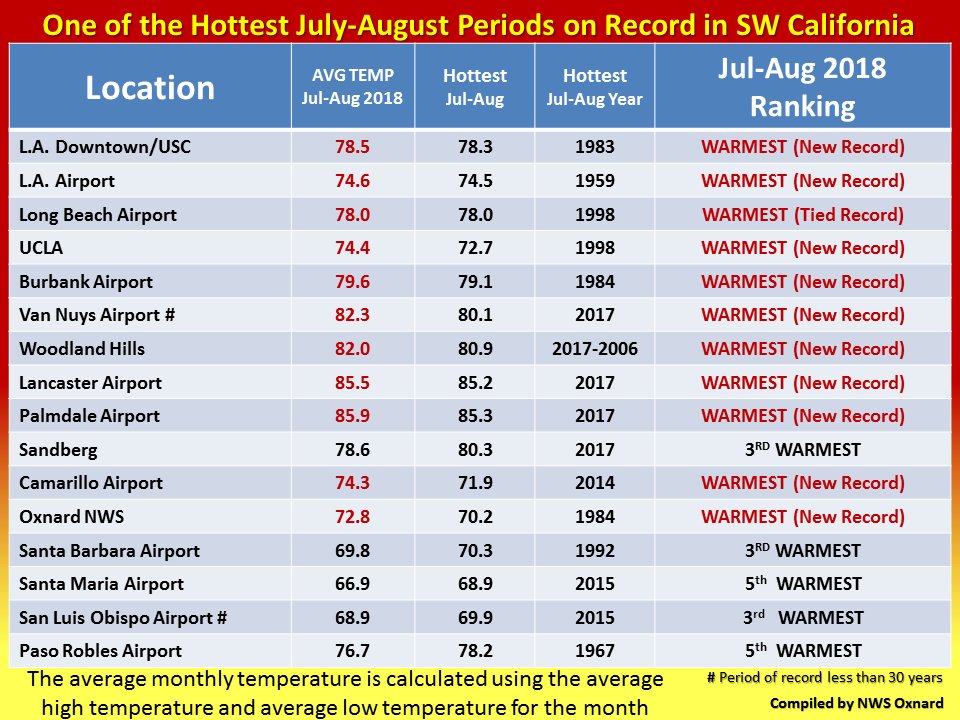 Gulf of Maine water temperatures have soared near record highs after an ocean “heat wave”: https://wxch.nl/2MTKJCo 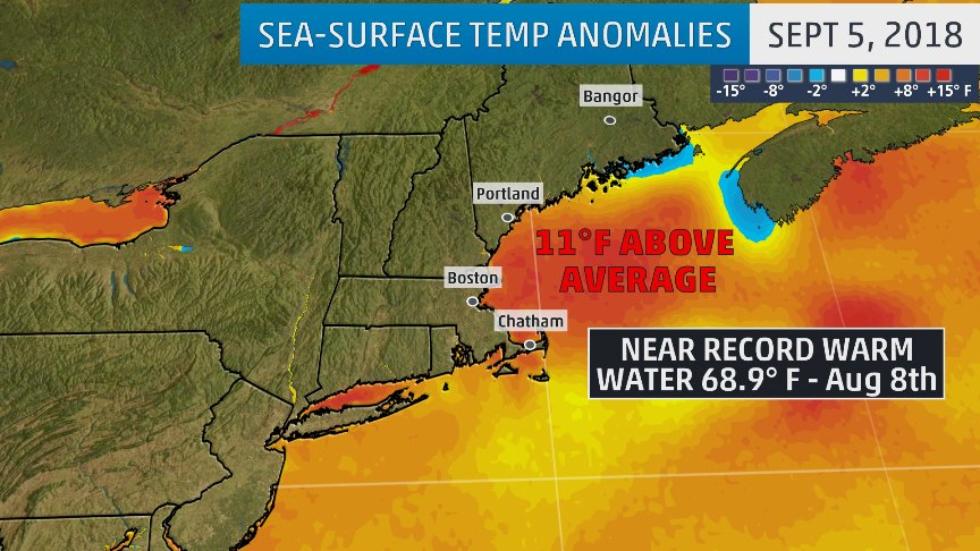