Friday September 7th… Dear Diary. The main purpose of this ongoing post will be to track United States extreme or record temperatures related to climate change. Any reports I see of ETs will be listed below the main topic of the day. I’ll refer to extreme or record temperatures as ETs (not extraterrestrials)😊.  Here is today’s main climate change related topic:

It’s becoming more apparent over the last couple of years to this writer that global warming is influencing tropical cyclones despite the views of some expert contrarians with high educations. Florence in all probability will get an attribution study after, gulp, the thing makes a run at the United States. Yes, today I am stating that Florence will make a United States landfall probably as a major hurricane. Before posting a slew of information on Florence let’s briefly list some recent hurricanes and the reason why some aspects of these systems can be attributed to climate change:

2) Harvey: Very rapid development in western Gulf then unusual stall in Texas leading to extreme record rainfall in 2017. System has already been attributed to climate change via a study:

3) Irma: Record length of time in Atlantic Basin for a system to hold category 4/5 strength in 2017.

4) Ophelia: Furthest north and east for a major hurricane to get in Atlantic Basin in recorded history eventually making landfall as a weaker system in Ireland in 2017.

I may add more systems and/or adjust these statements as I see notes from experts over the weekend. Notice that I did not put Maria or even Katrina on this short list. While both were extremely strong hurricanes systems of their nature have been occurring well back in time looking at historical archives. I contend that global warming made these hurricanes stronger, but any attribution study would be a hard nut to crack for both Katrina and Maria,

Unfortunately Puerto Rico happened to be in the way of Maria. Katrina is in a gray zone having gotten down as low as 902 millibars, as far as pressure goes, with a fairly warm ridge steering it westward to its north. New Orleans suffered mostly due to a bit of bad luck due to Katrina’s path and bad engineering due to its levee system in 2005.

Here are some notes on hurricane attribution for Florence and the systems I have seen in the last 24 hours:

Updating yesterday’s tidbit… as of Friday morning’s advisory, 79 named storms have passed within 200 nautical miles of #Florence‘s position since 1851, and not one has ever come close to the U.S. coast. 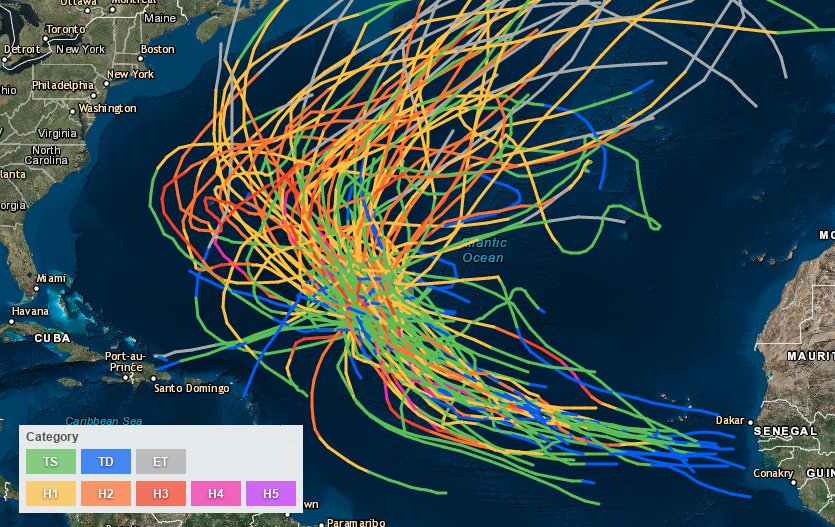 Check out this segment I produced for @JenCarfagno that aired earlier on @AMHQ. In it we talk about how uncommon it is for a storm near Florence's forecast position to make landfall in the U.S. pic.twitter.com/l6qUZA76kd

Water is crazy warm off east coast. That’s contributing to a steering ridge 2 to 3 standard deviations above normal! No storm on record near where #Florence is right now has made US landfall. But this one might. A changing climate & changing ocean really do matter to real weather 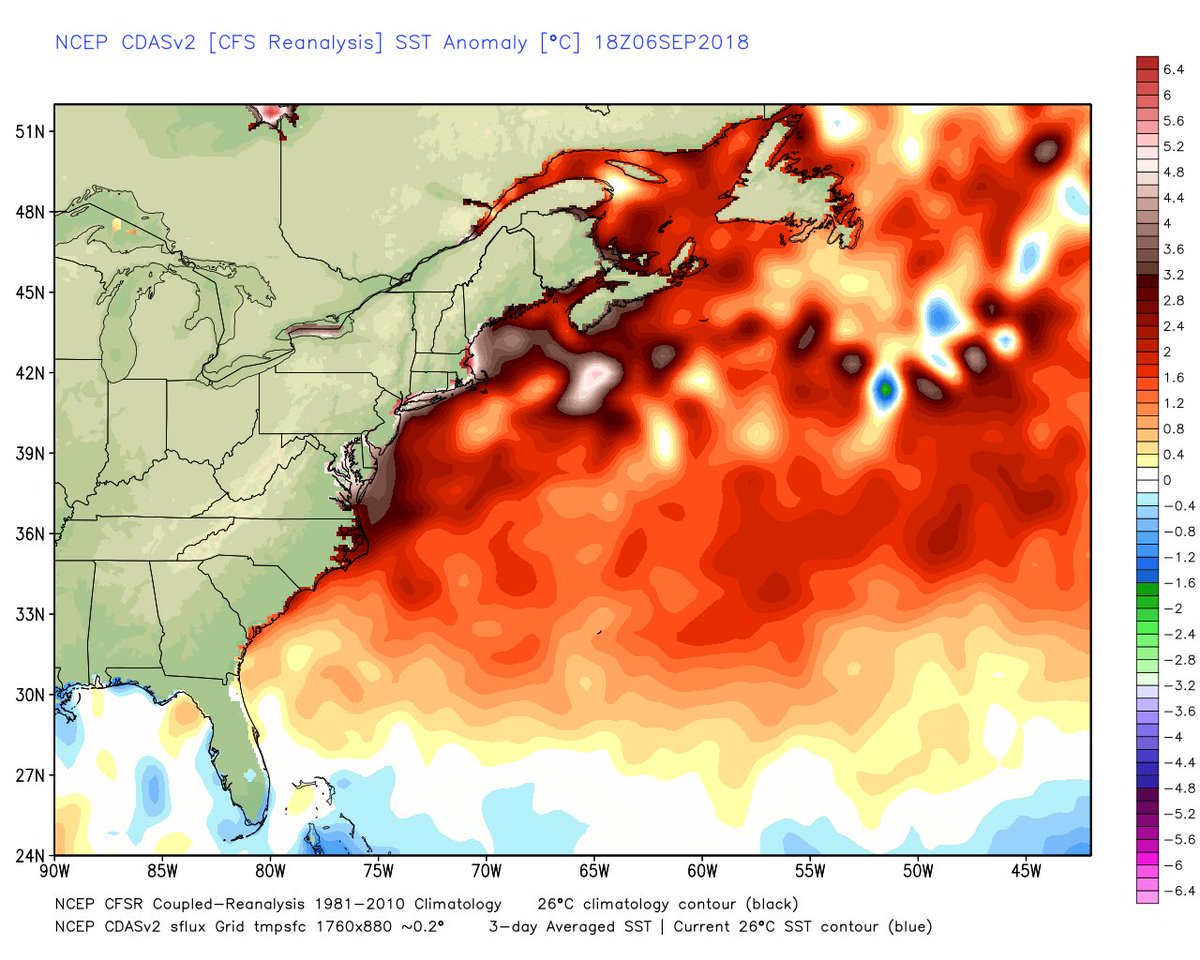 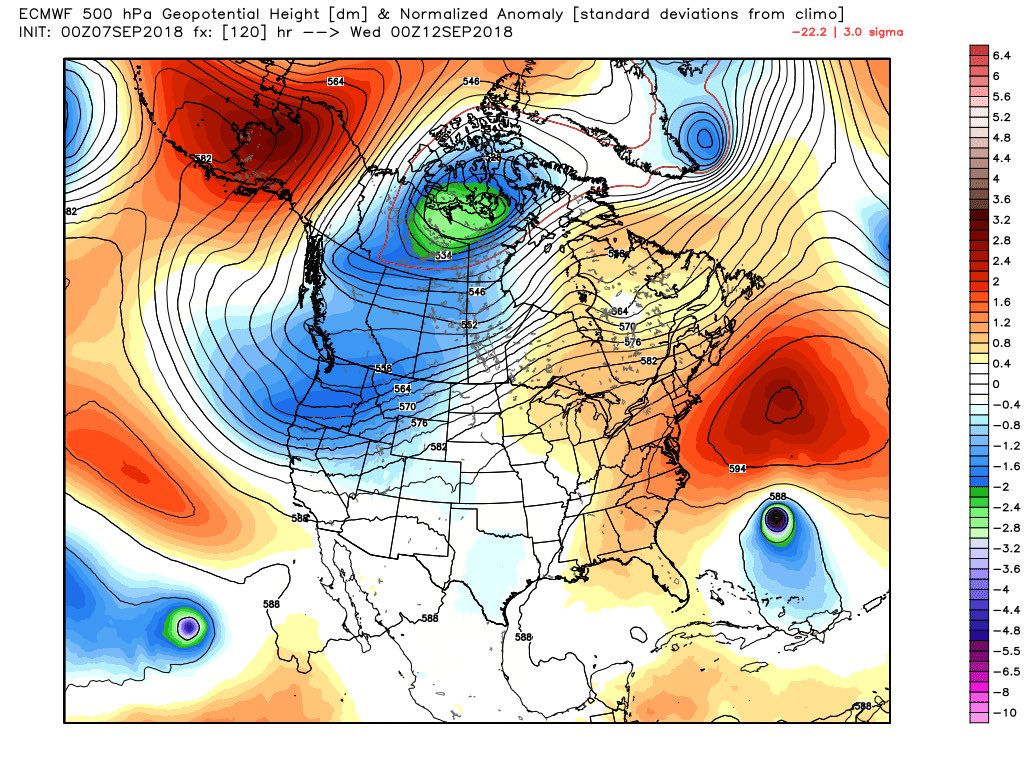 Globally, this is a remarkable day. I can’t find another example of a hurricane/typhoon nearing Guam, Hawaii & the eastern United States at almost exactly the same time (days ~4,5,6 respectively). Closest is Omar, Iniki & Andrew in 1992 (2 weeks). Pretty incredible! 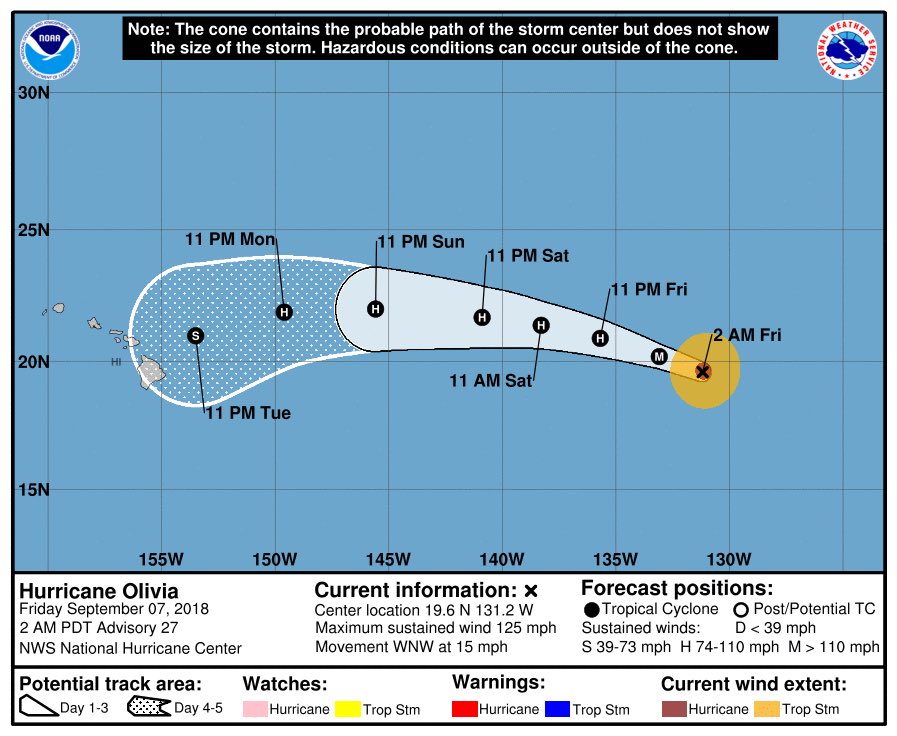 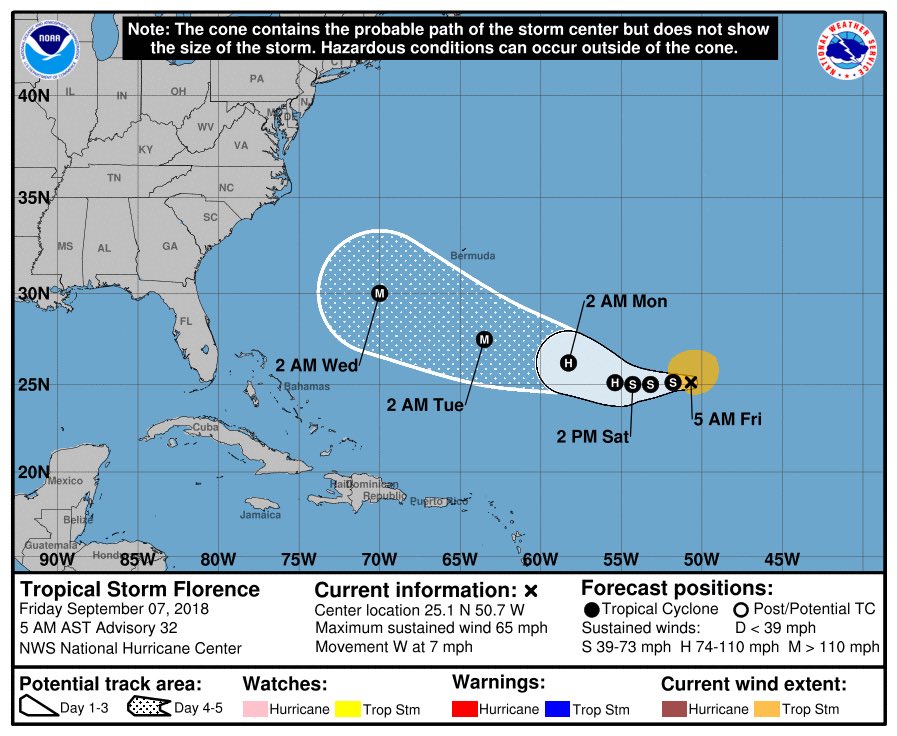 O.K. Now I will just post more model information on Florence. The situation for the East Coast of the U.S. is looking more dire with each passing hour this Friday:

Yesterday: SW half of #Florence choked by shear and dry air

Today: 1st signs of W side starting to "breathe" again, which will lead to reintensification in the coming days pic.twitter.com/h3XCukt1ry

I have been remiss the last few days not posting ET reports with Florence in the brain. Thankfully the National Weather Service has come up with some nice lists. Yes, this heat is part and parcel for the reason why Florence will probably slam a good portion of the East Coast. Tomorrow we can start pinning down which portion of the coast that is most likely to get a direct hit. Here are those ET’s:

More high temperature records were broken or tied today.  Interesting that most of these previous records for this date were set 35 years ago in 1983. 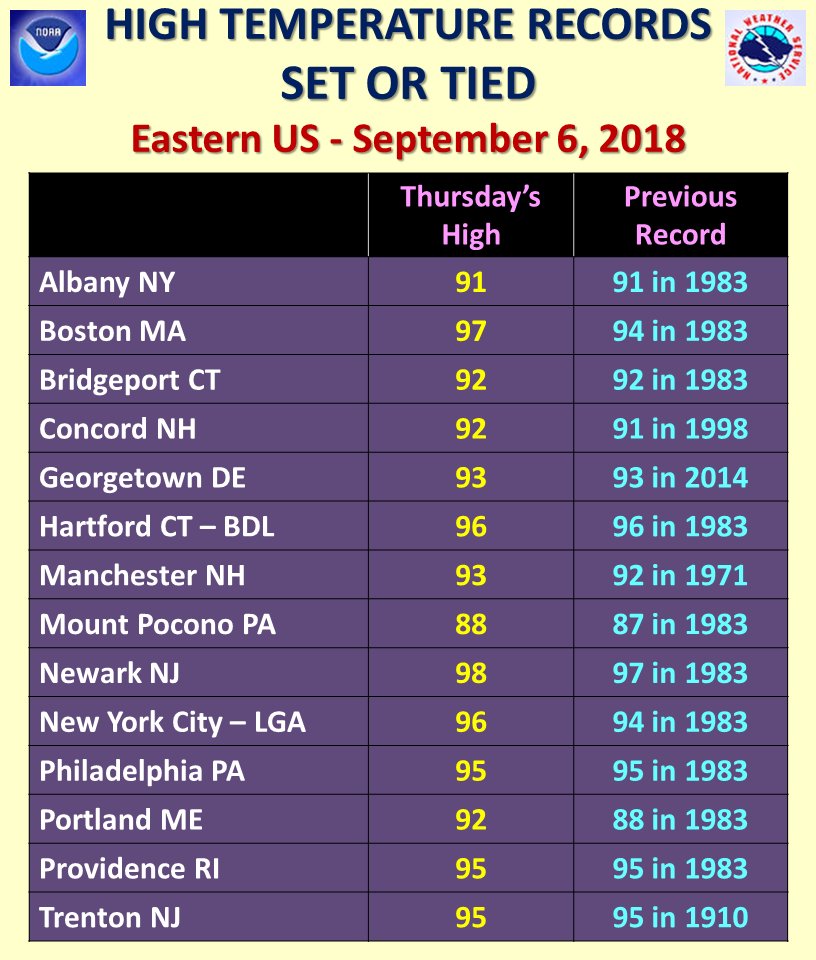 More high temperature records broken or tied across the Eastern US this afternoon. 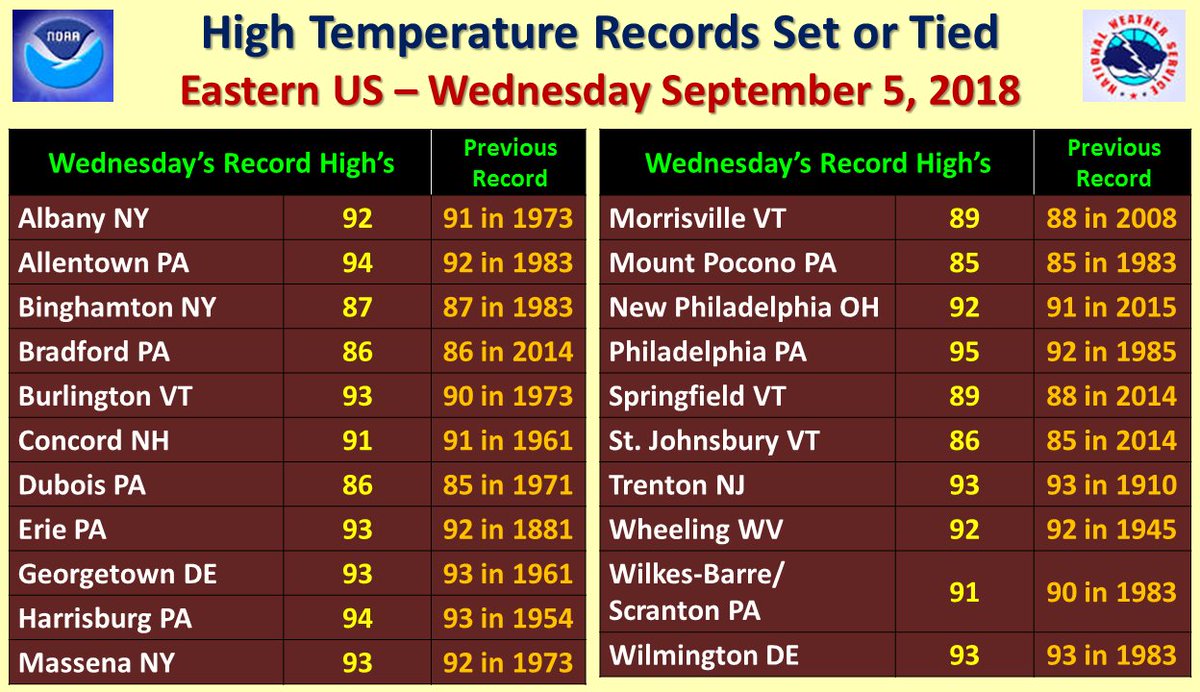 Several high temperature records broken or tied today across the Eastern US. 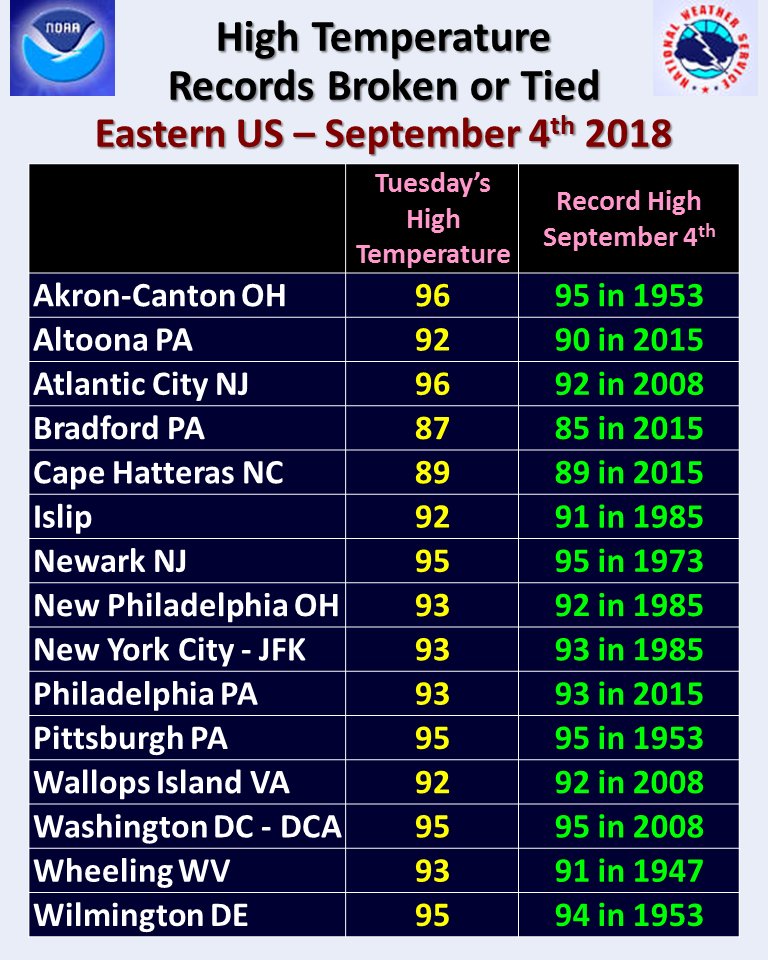