As bad as my met colleagues thought Michael would be at landfall yesterday and last night, the system will be far worse than expected. As of this writing from noon-2 PM EDT WED Michael is making landfall in the Panama City/Mexico City Beach area but as a borderline CAT 4/5 Hurricane. When a storm is worse than expected meteorologists often say among themselves that the system has “overachieved.” As bad as Florence was that system “underachieved” not coming onshore as forecast as a CAT 4 but a relatively weak CAT 1. Powerful Maria from last year moved into Puerto Rico in a weakening phase, though, also as a borderline CAT 4/ 5. Irma did not move through the core of Florida as a CAT 3 or 4,  just mainly as a CAT 2 along most of the path through that state. Michael will be that rare powerful hurricane that makes landfall while in a strengthening phase just like that of Andrew in 1992.

Michael looks far more ferocious than Hugo was when I personally encountered that system in Charleston in 1989. Also Michael was powering up when it hit the Florida Panhandle while Maria and Irma were leveling off or diminishing  before they hit their main targets in 2017. I have no doubt that structural damage from Michael will be at least as significant if not worse than that of Maria was last year as the system rips through the Florida Panhandle into South Georgia.

Am more concerned today about the area of disturbed weather in the eastern Caribbean. What’s left of #Kirk appears to be flaring. and some models hint at development. Climatologically in October the Caribbean needs to be watched carefully. 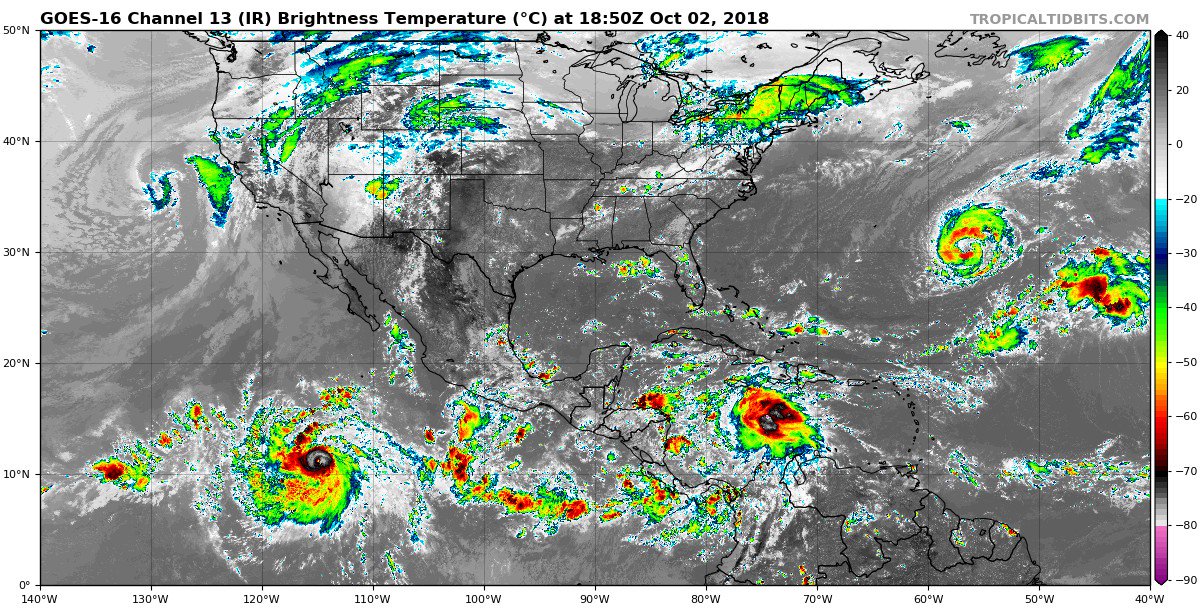 As late as Sunday Michael was no more than a depression near the Yucatan Peninsula. In only about 72 subsequent hours Michael was approaching Florida as a borderline CAT 4/5 hurricane. When all is said and done with Michael people will complain that they have not had enough warning. This is understandable given that Michael only formed about three days ago.

One of my worst fears concerning global warming is that future storms will have a tendency to blow up more rapidly closer to affected coastlines giving people precious little time for preparations. Indeed “unprecedented” Michael for the Florida Panhandle may be a precursor to this effect. Again I will state that the main research with hurricanes moving forward should be unlocking the secrets of how these systems can rapidly intensify, or how they can loose power from just the most subtle synoptic effects such as light wind shear and eye wall replacement cycles. Models definitely need to improve. None of what I saw even as late as 2 AM EDT WED had Michael getting a pressure bombing out as low as 919 millibars.

That stated the track and timing of this Hugo/Andrew type system remains the same as that of yesterday moving through the Southeast. CAT 1 wind gusts will be felt as far east as Augusta, GA. I can only imagine how bad the situation will get from Tallahassee into South Georgia over a very large area, I might add. I’ll stop pontificating at this point and start posting social media information and images. As usual, the newest items will be at the top of this post with older items kept at the bottom. I may post some climate related items at the bottom of today’s post for all to peruse, as well:

Went home from @weatherchannel, got some sleep, woke up, and checked on #Michael. It's not every day you see the #Atlanta #radar looking like this… pic.twitter.com/IbsNoGnRPD 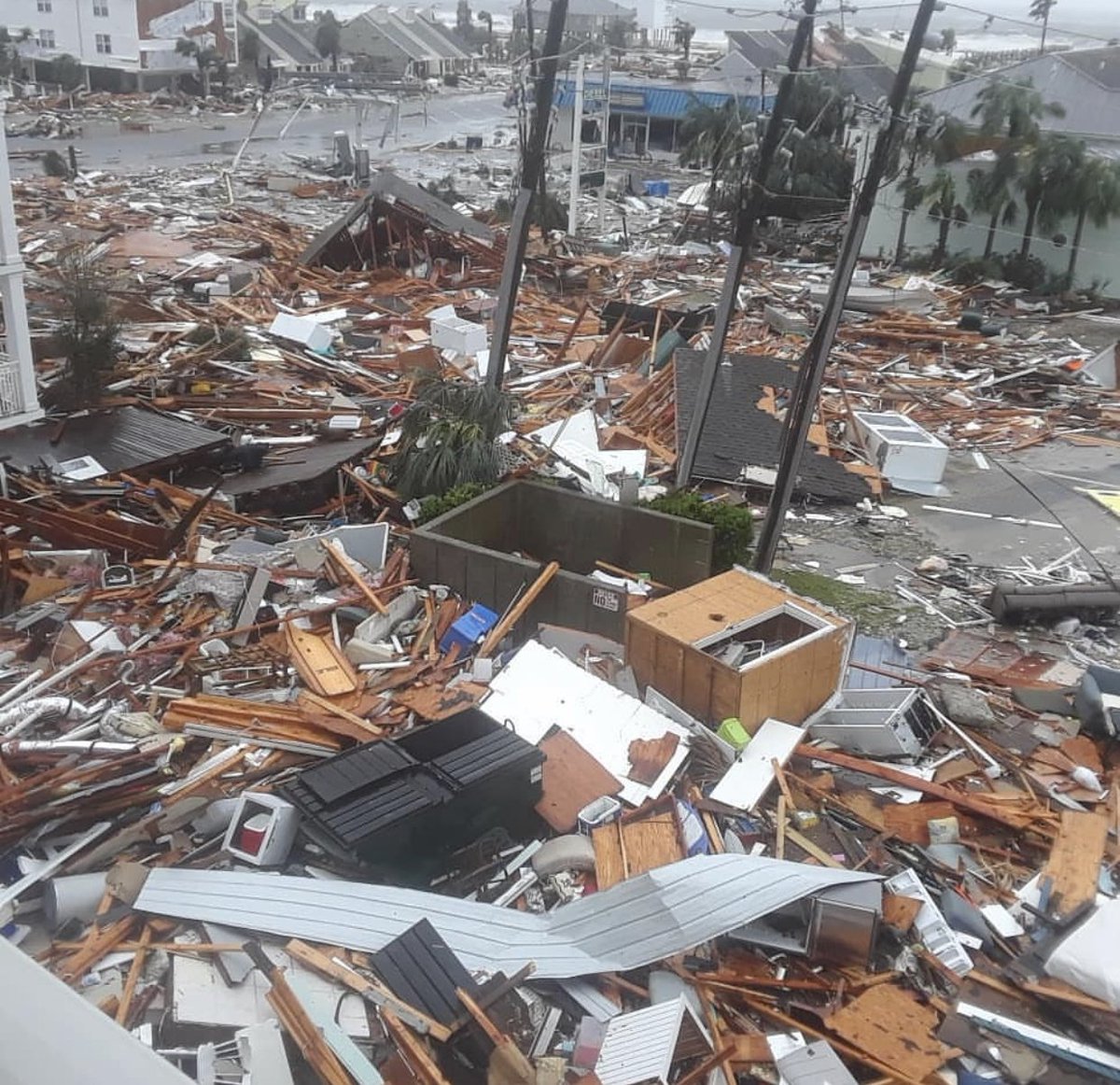 Good friend of RadarScope, @NashWX, created a #hyperlapse of #HurricaneMichael. Pay close attention to the speed and consolidation of the eye wall as it approaches Panama City. pic.twitter.com/YjgKAnVgaJ

After laying waste to parts of the central Florida Panhandle, #Michael is plowing into southern Georgia with high winds and torrential rain https://bit.ly/2IT2nAZ 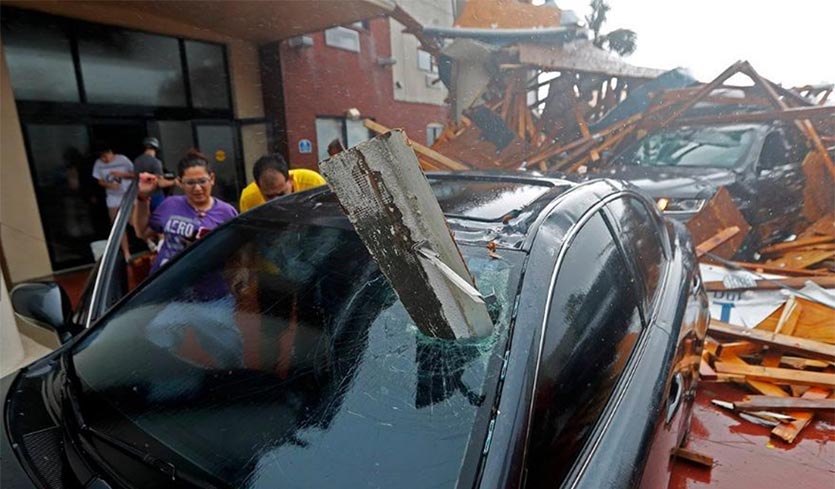 Just wow! Blue sky underneath the eye of Michael:

Wow! Video from directly underneath the eye wall of #HurricaneMichael. Taken by Stefan Melendez on Facebook. pic.twitter.com/KfIrrIdtoL

Before and after from Mexico Beach, FL. Notice structure in blue totally gone in after image. Put together through videos on this FB page. #HurricaneMichael #Michael https://t.co/2NfG2A0Iwu pic.twitter.com/viKcHsUsIJ 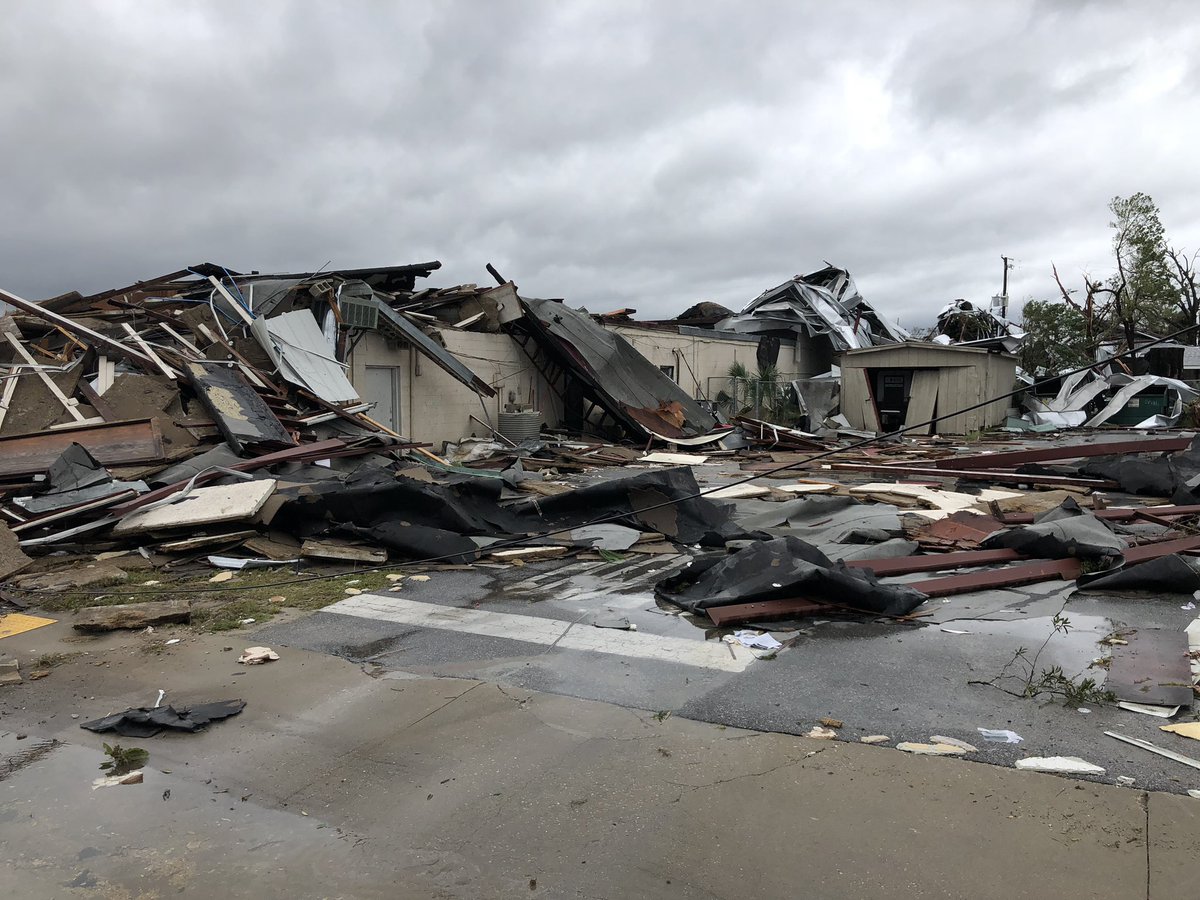 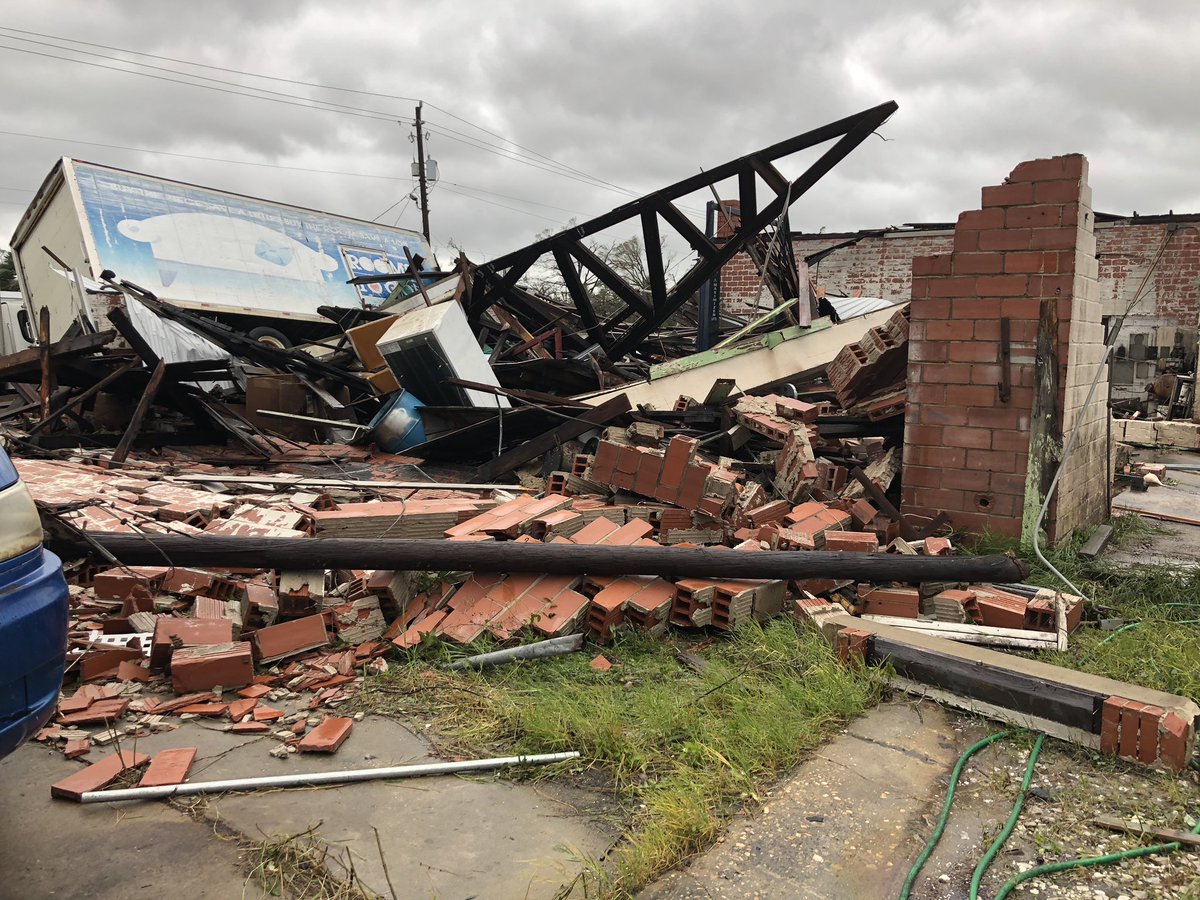 Here’s the landfall loop of #Michael for posterity- never in my worst nightmares did I think we would be dealing with a 155 mph #hurricane at landfall… pic.twitter.com/gHy3ltm9tS

Here's a 3 hour radar loop of Hurricane #Michael making landfall and moving through the Florida Panhandle. No doubt that this storm is going to be retired. pic.twitter.com/Bptxn3HZsj 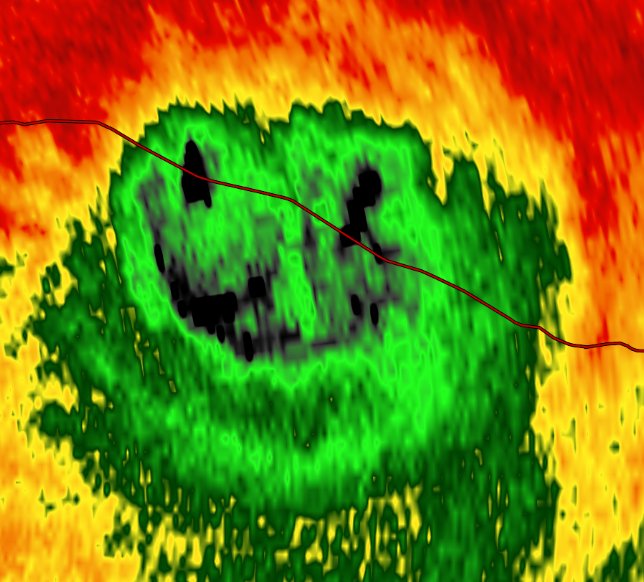 Damage now from the back side of our condo building in Mexico Beach. #Michael 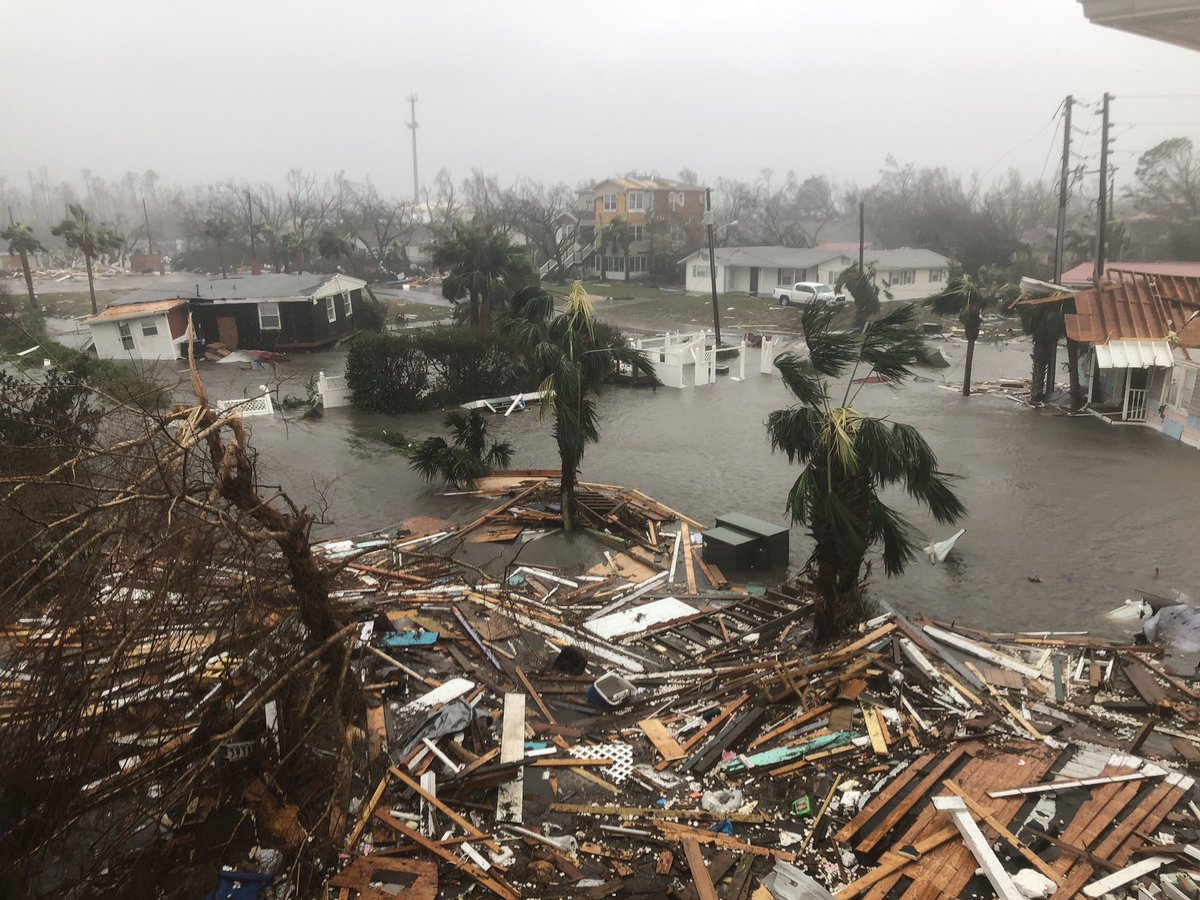 The center of #HurricaneMichael is now approaching the southern extent of the Alabama/Georgia border. Conditions across these areas are quickly deteriorating with the eye wall now impacting the I-20 corridor. #ALwx #GAwx pic.twitter.com/FZeFbFDYLJ

A look at what houses in #Mexico Beach, #Florida look like right now. This is a follow up from the previous clip posted. They are now submerged and were no match for #HurricaneMichael (via Tessa Talarico) #Hurricane #Michael #HurricaneMichael2018 pic.twitter.com/GJENrhFJha

The core of Hurricane Michael is fully inland. Storm will be slow to weaken. Hurricane force winds will begin soon in southeastern Alabama and southwestern Georgia. Center will track between Dothan/Albany this afternoon, continuing toward Macon & Augusta this evening and tonight. 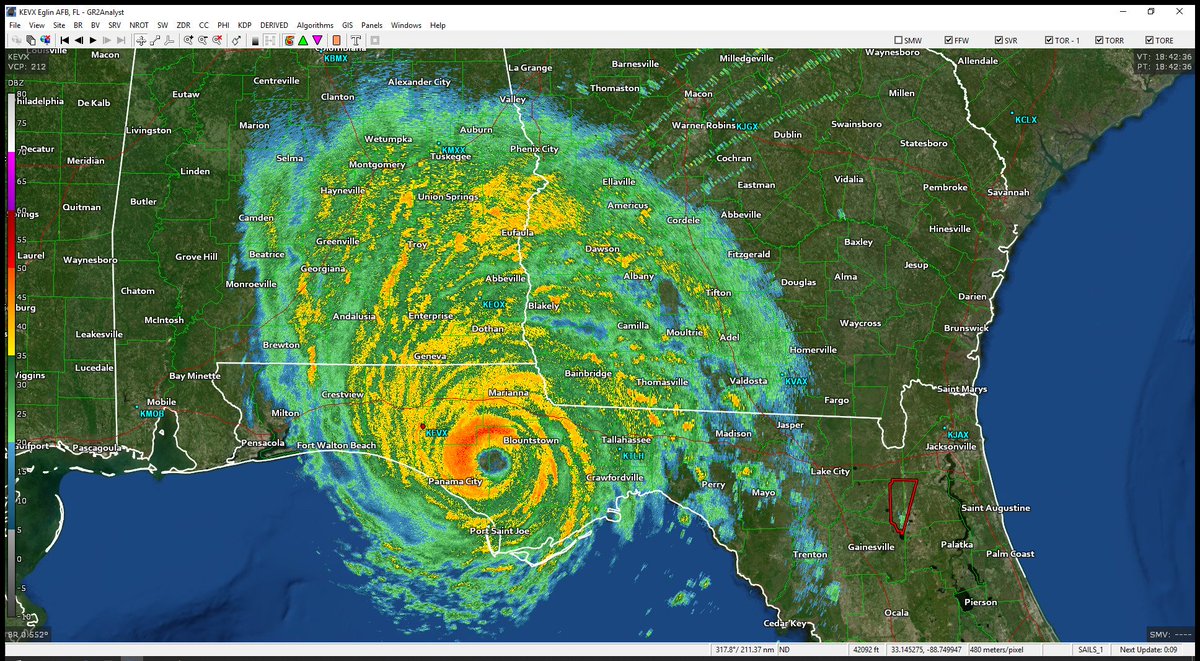 Eyewall of Michael by Tyndall AFB. Full sunshine in eye! Experience of a lifetime. Now pray for the people affected. #flwx

Landfall has occured on #HurricaneMichael with winds of 155MPH, just shy of category 5 strength. Difference between the two are non-existant.

This is the 3rd strongest hurricane to ever hit the continental United States. 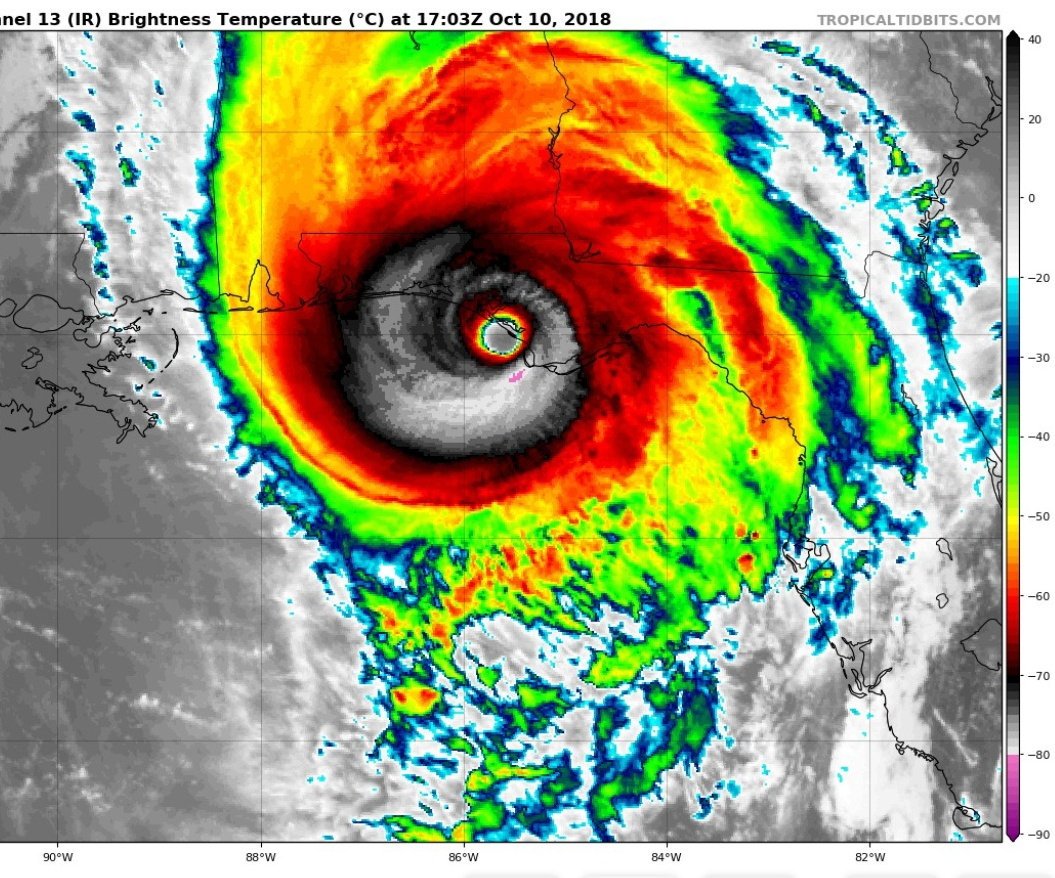 …MICHAEL INTENSIFIES AS IT MAKES LANDFALL NEAR MEXICO BEACH FLORIDA…

Sustained winds have increased to 155 mph and the pressure has fallen to 917mb, beating Katrina back in 2005. 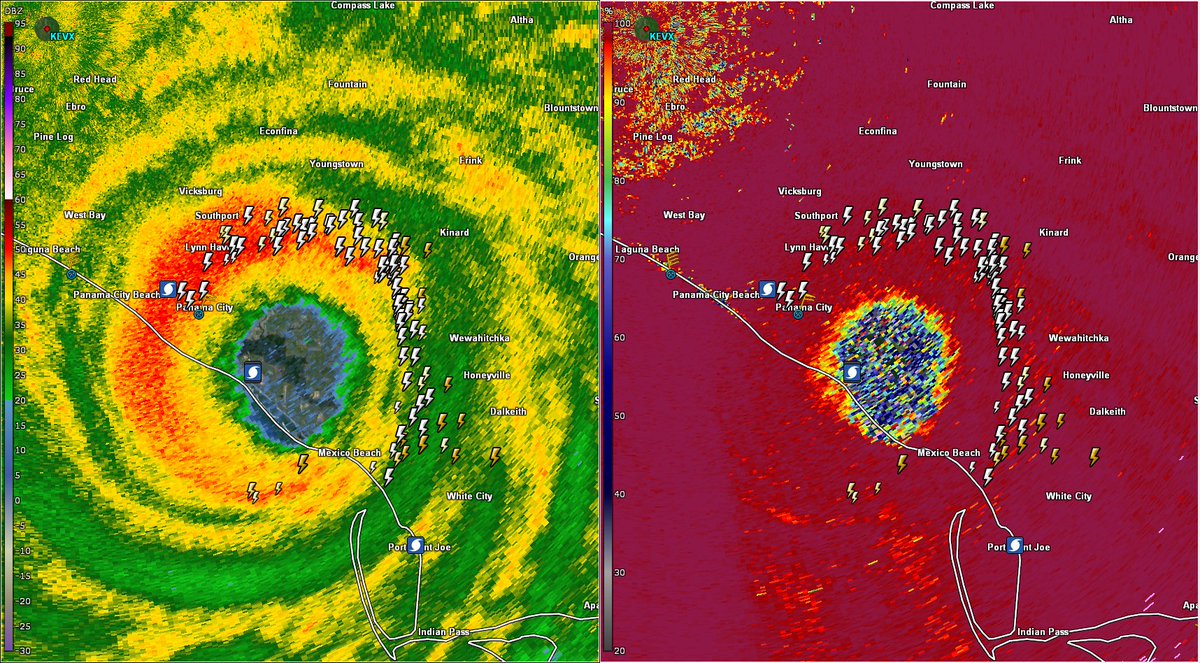 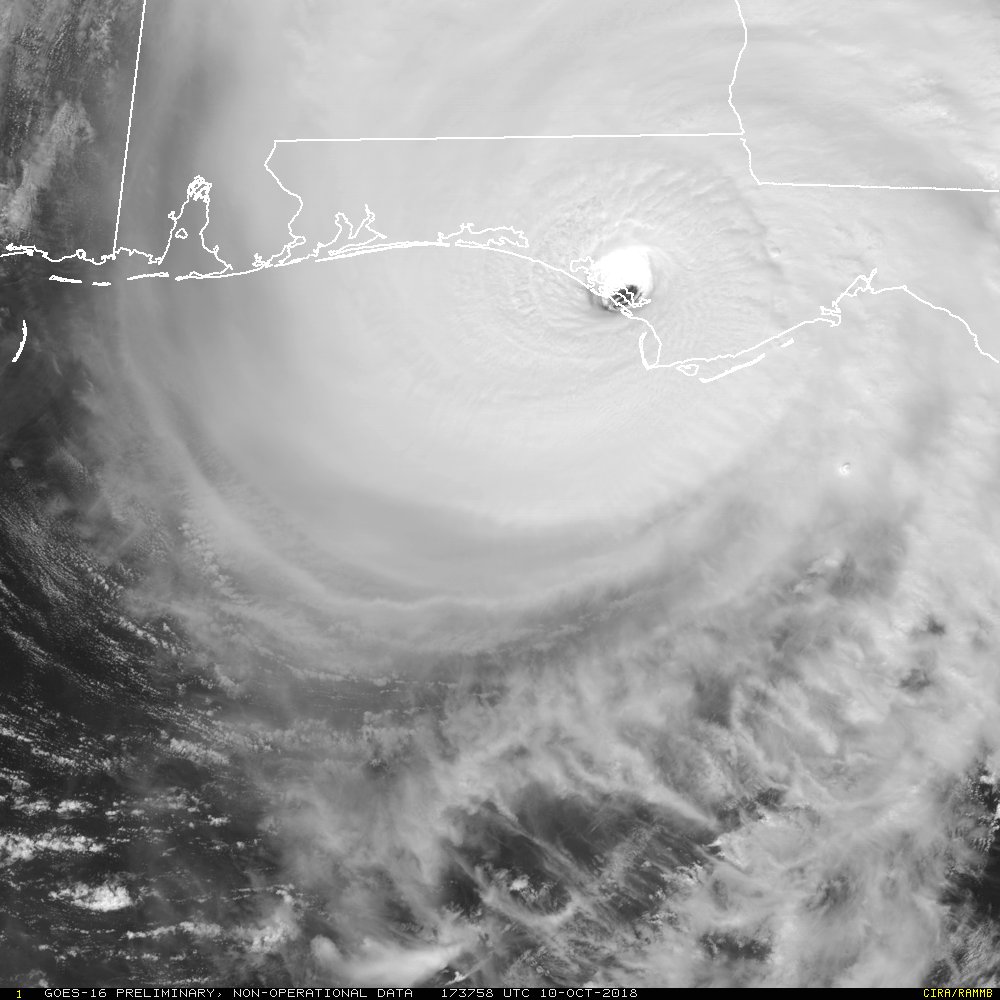 Buildings are already succumbing to Michael’s winds. This is incredibly bad pic.twitter.com/3Zt6VmYaTl

#Michael is poised to go down as one of the strongest landfalling U.S. hurricanes in recent memory. My heart is with all those in the path of this terrible storm. (satellite: @UWSSEC) pic.twitter.com/8rsJPttnyC

Unfortunately, still no signs of the eyewall degrading on #radar w/ #HurricaneMichael. If anything the high reflectivity ring has consolidated further while on a NNE heading.

6-9h away from landfall in #Florida Panhandle, likely as a Category 4 #Hurricane.

We have never had a category 4 hurricane strike the FL Panhandle in the observational record. Unfortunately for those on the coast, the window for leaving is probably shut. The storm went through dangerous intensification over warmer than normal waters over night. #ClimateChange 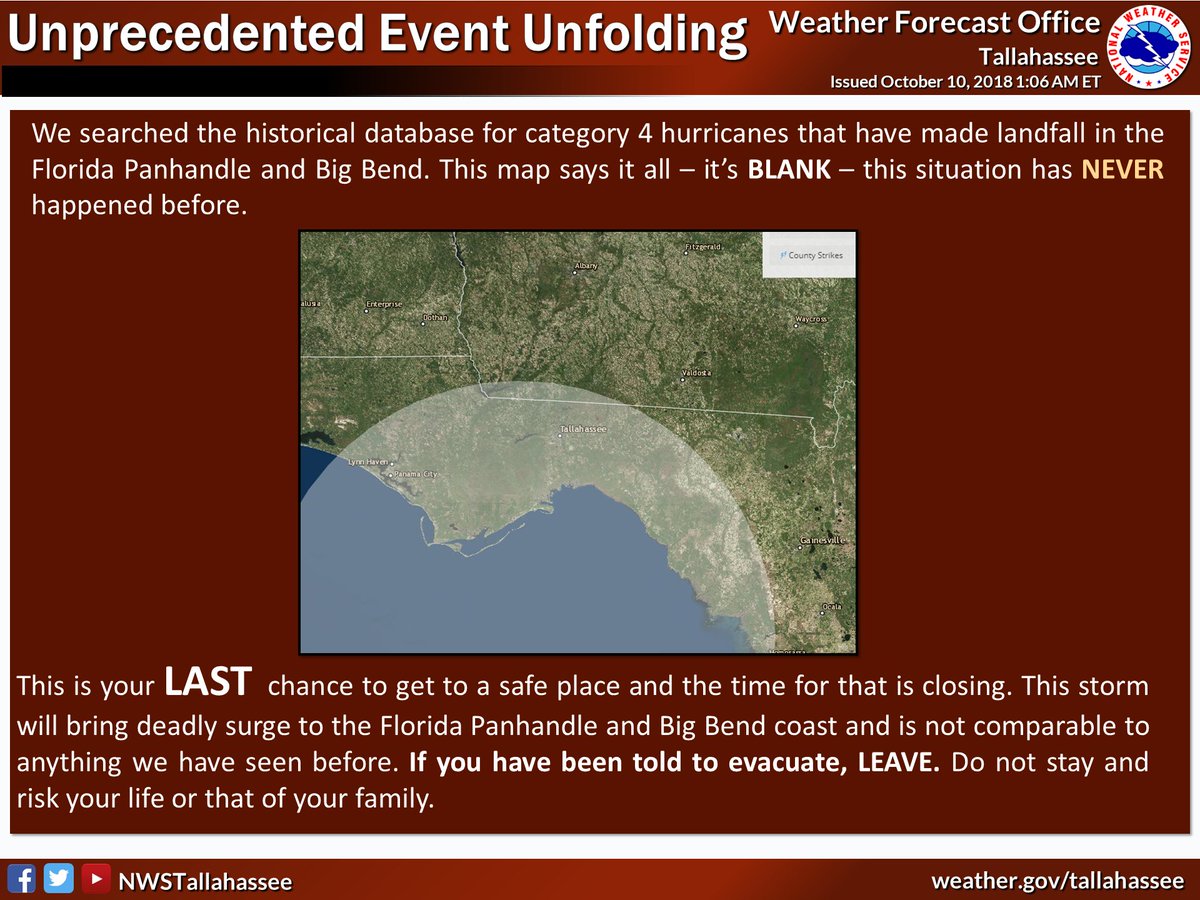 NWS TallahasseeVerified account @NWSTallahassee
If you live along the coast and were told to evacuate…this is YOUR LAST CHANCE. Hurricane Michael is an unprecedented event and cannot be compared to any of our previous events. Do not risk your life, leave NOW if you were told to do so.
7:14 AM – 10 Oct 2018