Today will be the last day in which the main topic is Michael. As of this writing Michael is a tropical storm with maximum sustained winds of 50 mph moving into North Carolina, a figment of its former self, but affecting areas hard hit by Florence only a couple of weeks ago. Just like with Florence it’s time for me to drag out my climate change check list to see if Michael has any aspects that researchers can identify for carbon pollution attribution:

Well let’s see. Michael attained winds of 155 mph and a pressure of 919 millibars before landfall, so #2 might apply, especially considering high Gulf SSTs and very warm air aloft over the eastern U.S. for the system to feed on.

#6 is a definite thing to look at. Michael was no more than a depression on Sunday near the Yucatan Peninsula and became a near CAT 5 hurricane on Wednesday undergoing what most experts considered as surprising intensification.

It was a quick turnaround for #Michael. From tropical storm to Category 4 hurricane back to a tropical storm in just three days. Long days if you were in the path of Michael's destruction. We at the @weatherchannel have been with you through the whole thing. pic.twitter.com/fOBeztXz4K

#7 may apply since a CAT 4 storm hitting the Florida Panhandle as late as October was unprecedented. In my opinion Michael had more climate change connections than either Maria or even Katrina.

Sadly, we now have 6 confirmed fatalities due to #Michael, all inland. 4 in Gadsden County, FL (NW of Tallahassee), one in Seminole County in SW Georgia, and one north of Charlotte in Iredell County, NC. Most known to be due to wind knocking down trees or structures onto victims.

Here are some stats on the historic Hurricane Michael. 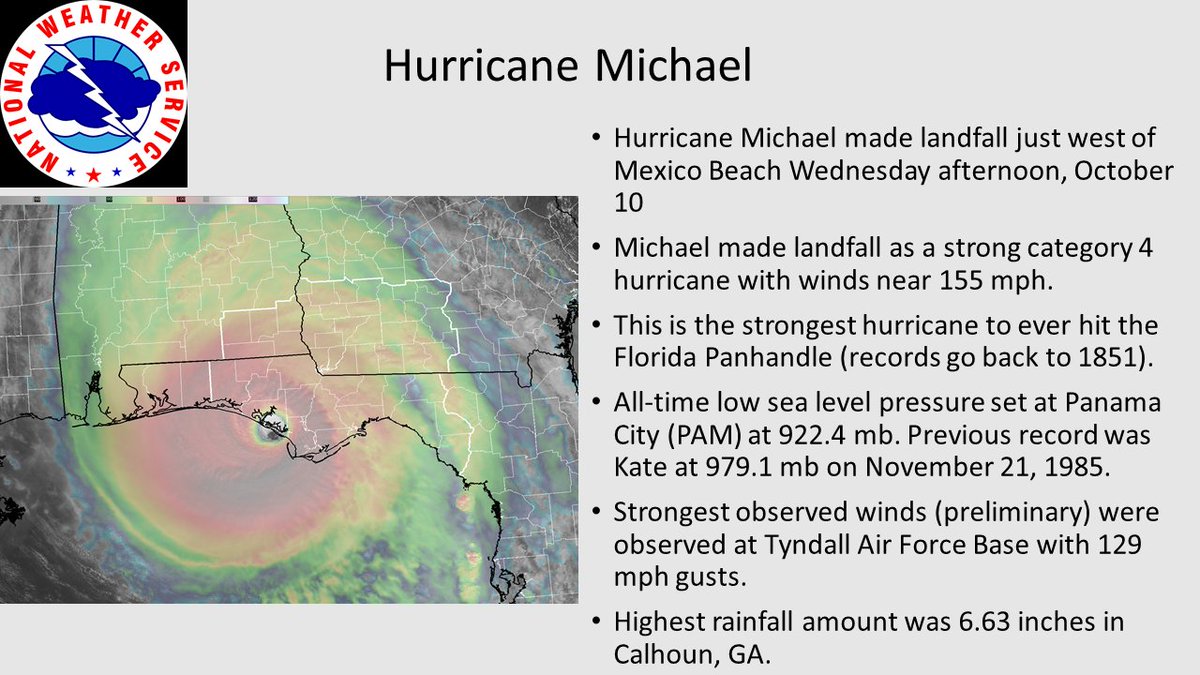 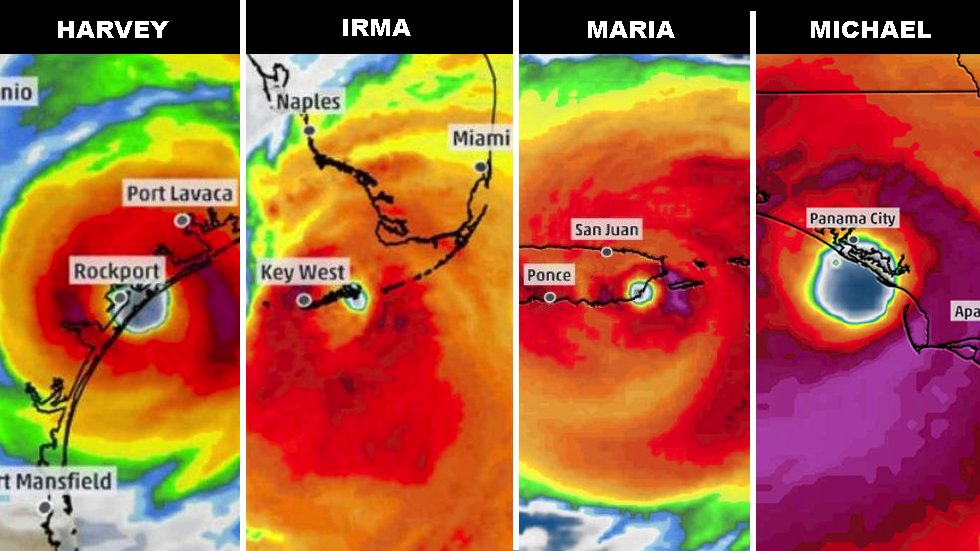 Here is a plot of Hurricane #Michael‘s track in relation to the axis of heaviest radar-estimated rainfall (left panel ) as well as locations of highest wind gusts according to the NWS Real-time Mesoscale Analysis data set (right panel). 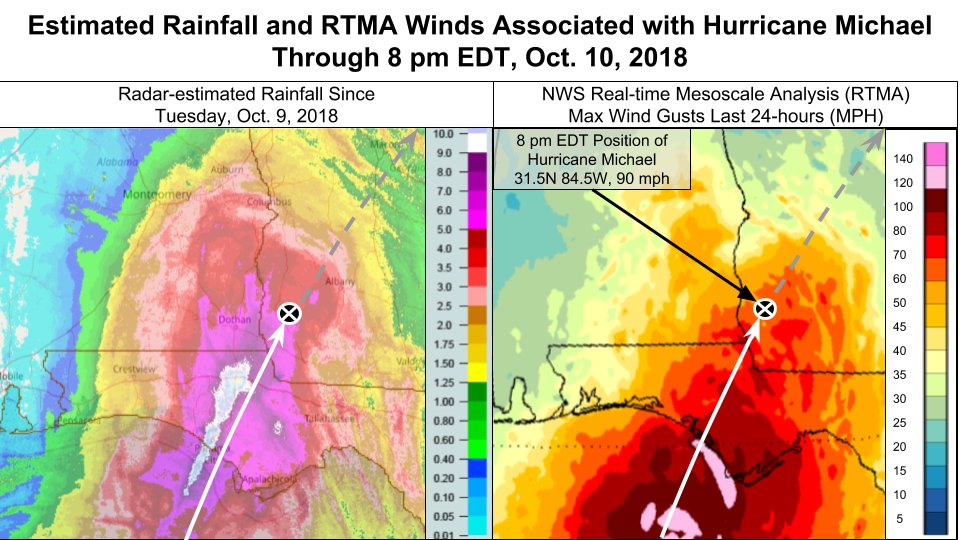 The following are more linked news articles, social media messages, and devastating images from the day after Michael hit the Florida Panhandle. As usual the newest items will appear at the top of the post. My heart aches for people and families left to pick up the pieces from this historic hurricane:

Dear Diary: This afternoon Michael is not done by a long shot:

Winds are increasing rapidly (growing blue area on radar) on the backside of #Michael– be prepared for damaging winds in central NC and VA, including the Raleigh area shortly. pic.twitter.com/Meexgx9kAp

Michael just won't quit. This actually looks like a developing storm over the Ocean. pic.twitter.com/cpkWue0xV8

Oh my! Thunderstorms (convection) is blowing up fast along the spine of the central Appalachians frim Michael leading to flash flood emergencies in Virginia this afternoon. 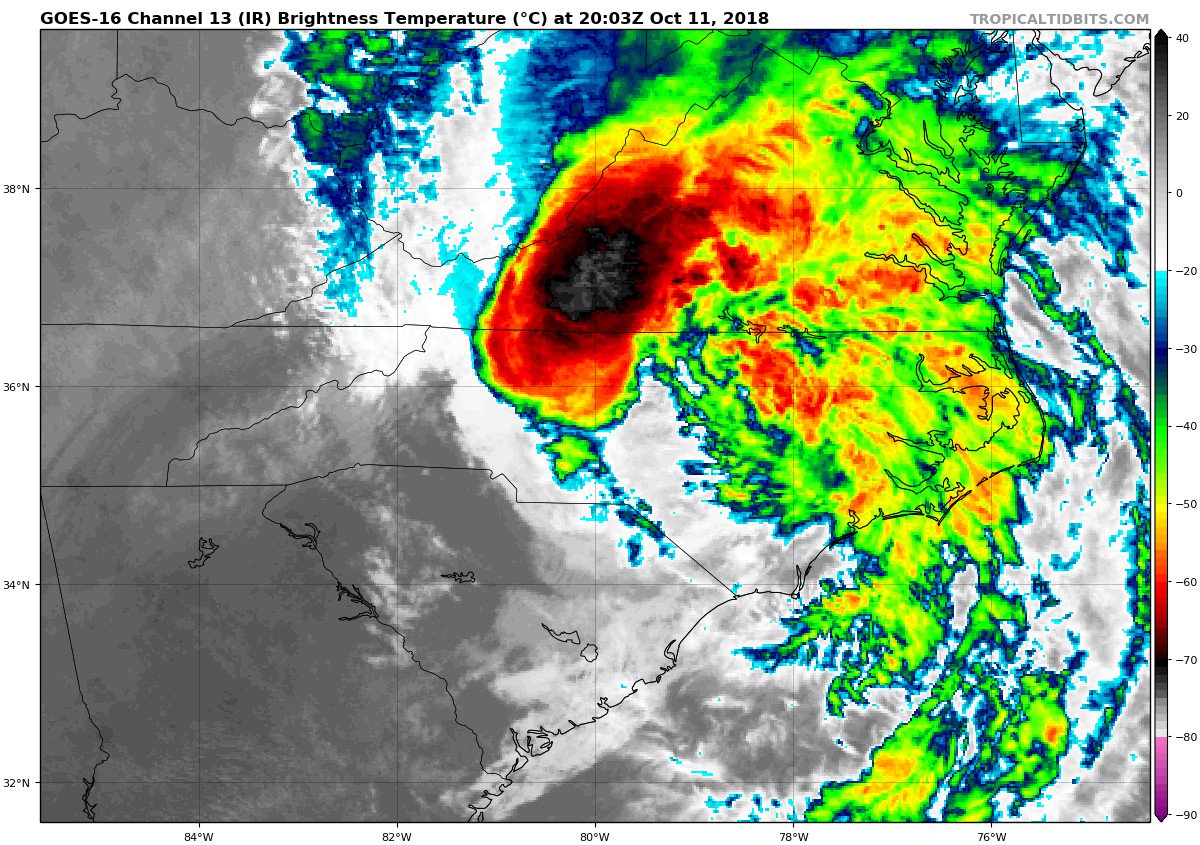 “Severe, life-threatening flash flooding with deeper inundation and numerous impacted roads is growing increasingly likely in portions of southwest and south-central Virginia, where rain rates may exceed 2-3 in/hr at times. ” 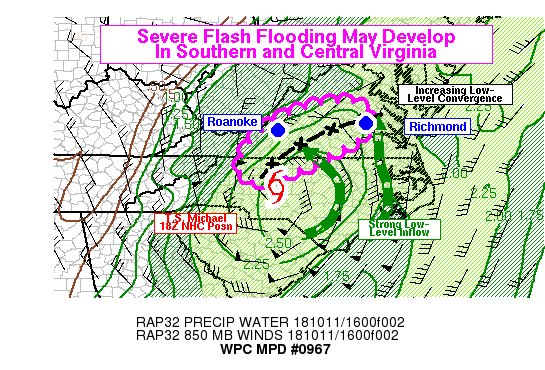 People often ask me why don’t you have any wind gauges on the ground to support the NHC estimate- this is why! Most of the time they are knocked out or the power is gone, effectively terminating the station 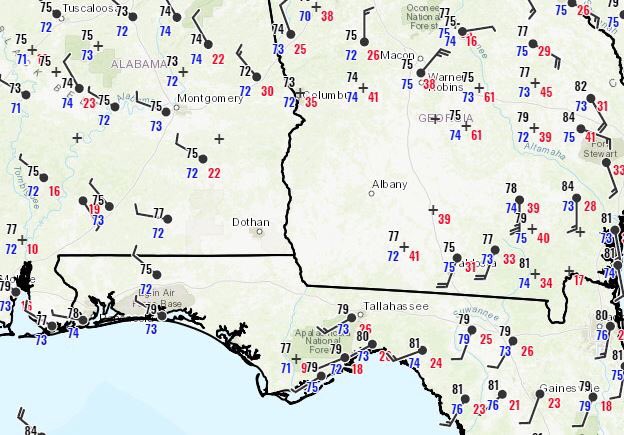 Josh JohnsonVerified account @JoshWeather
See the huge gap in weather reporting stations? That’s because #HurricaneMichael knocked them out.
6:12 AM – 11 Oct 2018

Tornadoes will threaten NC/VA this afternoon before TS #Michael reemerges in the open Atlantic. Meanwhile, some residents of the Florida Panhandle are dealing with mind-boggling destruction https://bit.ly/2RFJGoa 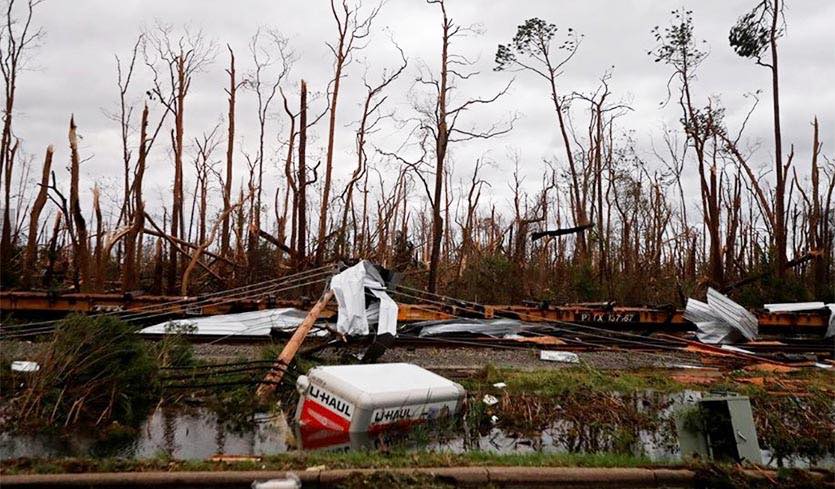 Aerial view of devastation at #MexicoBeach, Fl caused by #HurricaneMichael

Before v. After … homes swept off their foundations in Mexico Beach #HurricaneMichael #flwx #gawx pic.twitter.com/S7mWnh9hae

These trees near Tyndall AFB look like they've been snapped like a bunch of matchsticks. Incredible. pic.twitter.com/PlNDdwwArd

And now that #HurricaneMichael has made landfall, here is where it sits in Florida’s hurricane history… 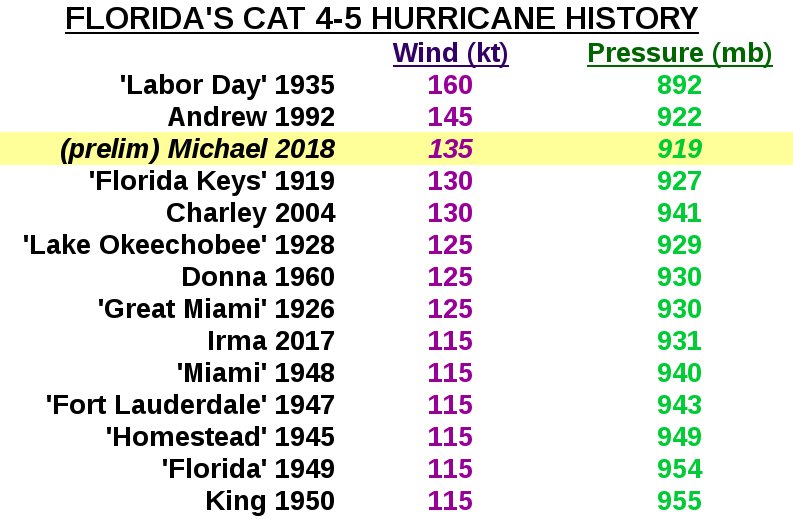 Unusually warm waters in the Gulf of Mexico — a signal of #climatechange — supercharged Hurricane Michael https://buff.ly/2C9KPPs  via @AP @borenbears 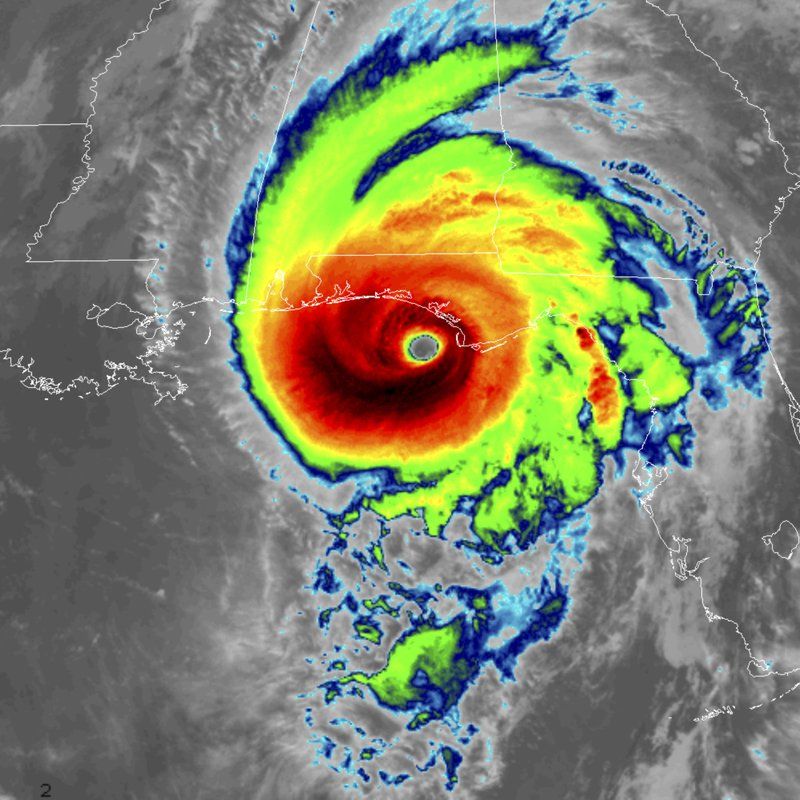 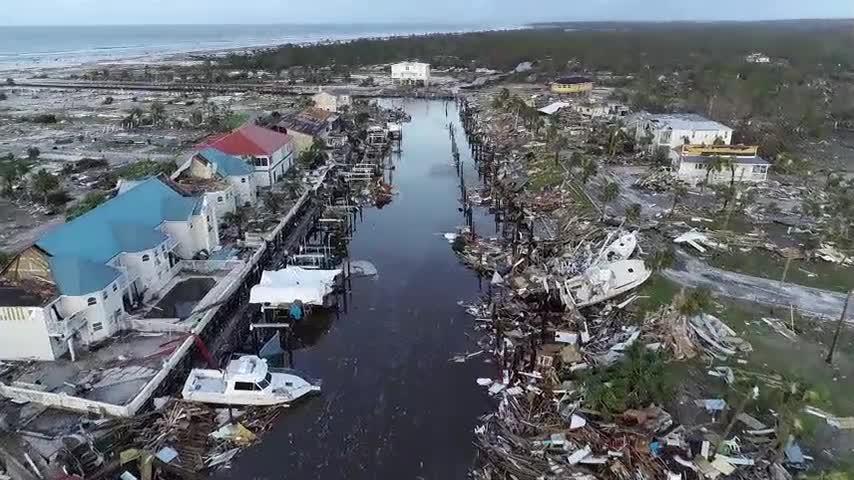 Tyndall Air Force Base suffered extreme damage from Hurricane #Michael as it came ashore. Nearly every structure on base suffered roofing damage according to the base commander. #flwx #tropics pic.twitter.com/9WeXTwMSu4

The @Space_Station just made a pass over #HurricaneMichael within the last minute. Look at these stunning views. #Michael #FLwx 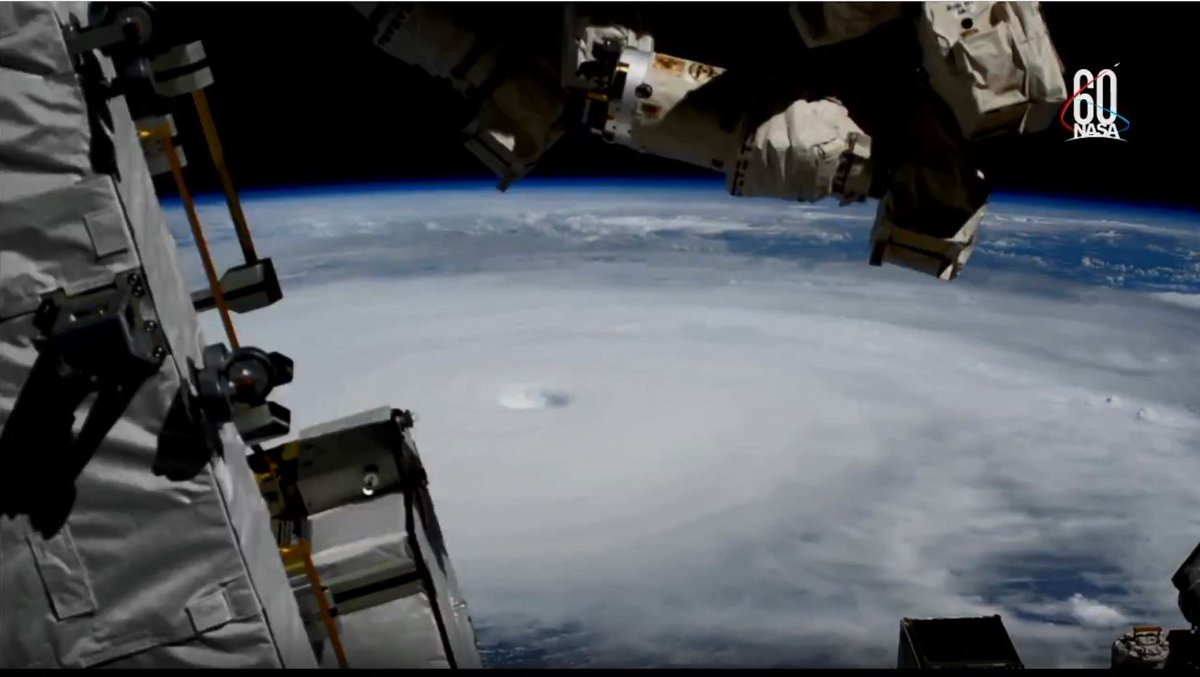 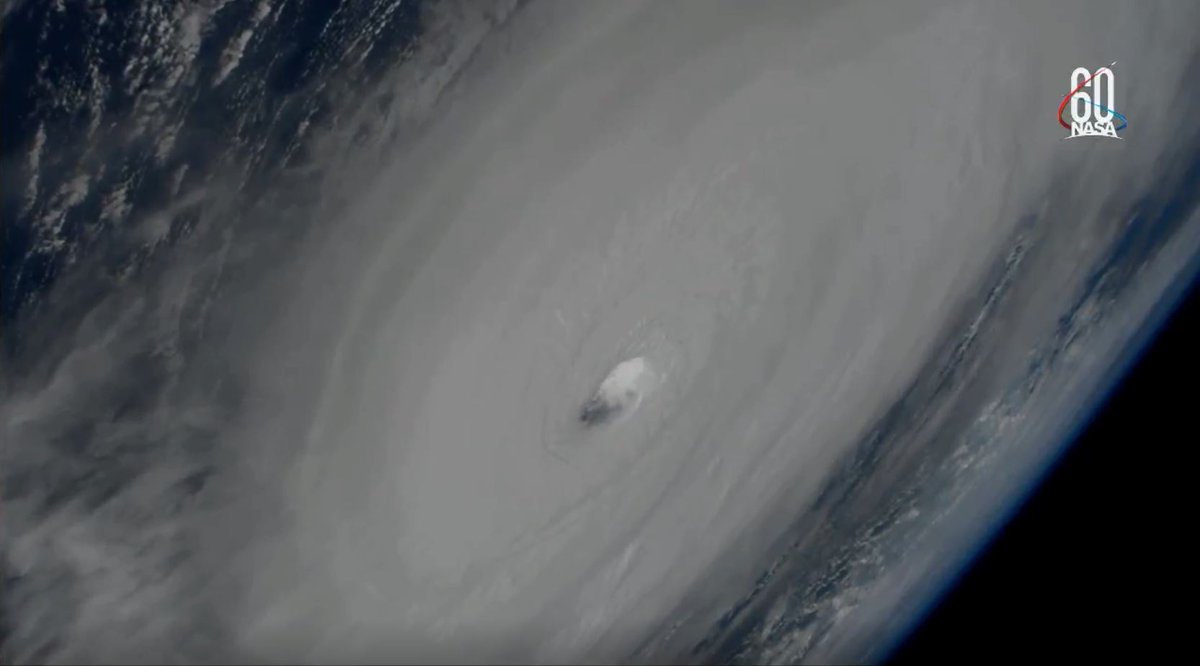 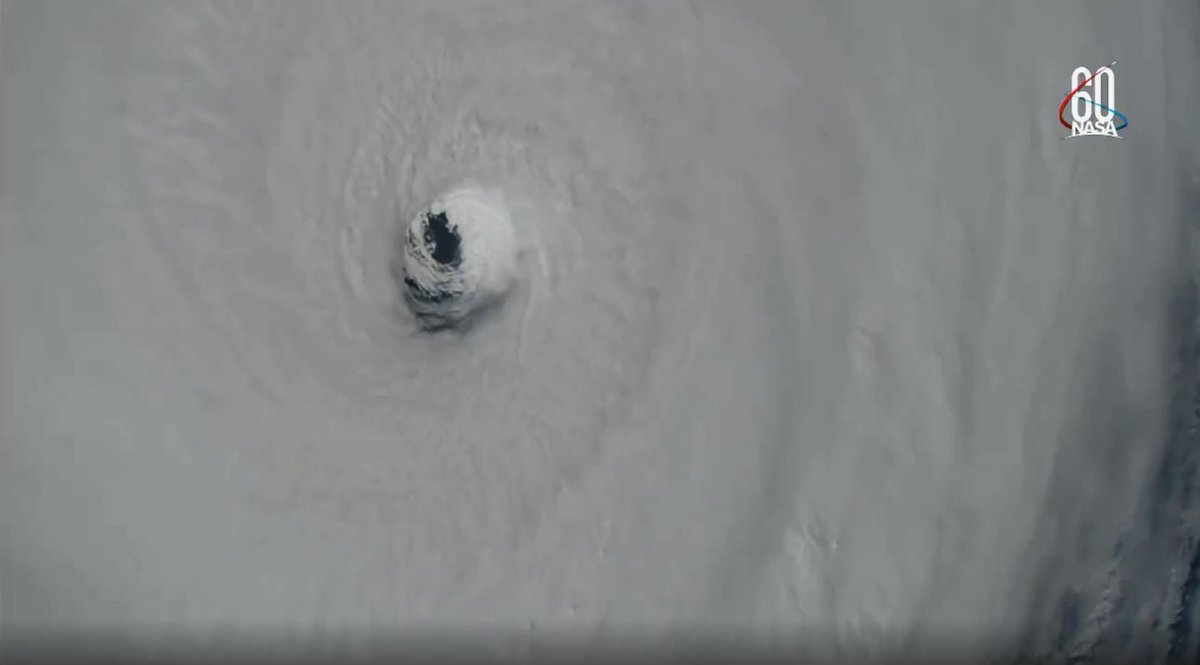 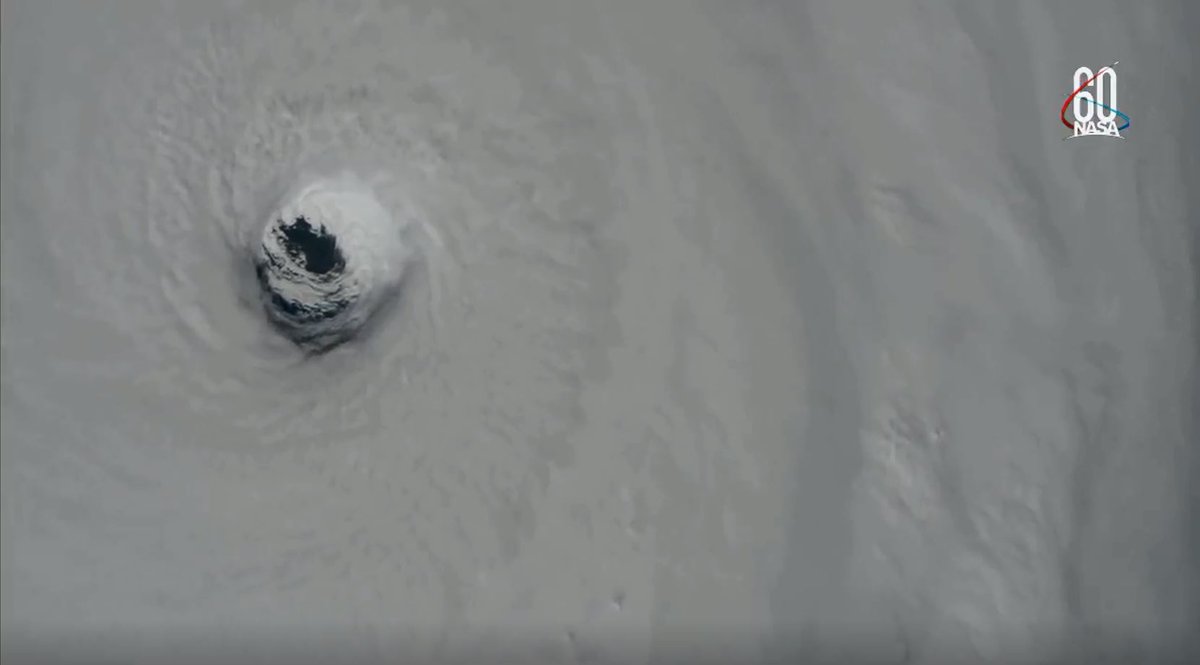