Those of you following the climate issue in the United States already know what troubles the great state of Florida has gone through this year, so this will be just a quick review. Well before Michael Florida had undergone a horrible red tide event, which killed marine life, and littered beaches with stinking, rotting sea creatures. Both Michael and the red tide have become politicized, threatening to upend Florida’s status quo. Will Florida and other coastal areas have to endure more and longer red tide outbreaks as the Earth’s climate warms?

First, what is the science behind Florida’s red tide outbreak? To answer this question I’ve linked the following article:

“A red tide, or harmful algal bloom, is a higher-than-normal concentration of a microscopic alga (plantlike organism),” explains the Florida Fish and Wildlife Conservation Commission, in a statement. “In Florida and the Gulf of Mexico, the species that causes most red tides is Karenia brevis, often abbreviated as K. brevis. To distinguish K. brevis blooms from red tides caused by other species of algae, researchers in Florida call the former the ‘Florida red tide’.”

For updated maps on the progress of Florida’s red tide see:

Here is the latest chart from the article:

I suspect but cannot prove that the bloom has been feeding off fertilizer leeching into and from Lake Okeechobee and coastal areas as a pollutant:

“A Federal study going back more than a decade concluded that man-made pollution worsens red tide. That makes the lake, laced with high levels of the fertilizer nutrients phosphorus and nitrogen, a likely source. What’s not clear, since the same nutrients get flushed from the coast, is whether it’s definitely a source.”

Looking at the above map I posted certainly one would suspect that fertilizer stemming from Lake Okeechobee would be the main culprit. The problem is a bit more complicated, though looking at this explanation:

Right now, the most frequent suggestion seen locally coming from folks who should know (universities in the State and local meteorologists) is that the red tides are an unfortunate confluence of dust from the Sahara and on shore winds from the Gulf of Mexico.

Dust from the Sahara gets swept up and is blown across the Atlantic Ocean all the way to Florida. It brings us very stunning sunsets, but also problems. If it makes it across the State, it ends up falling into the Gulf of Mexico. The problem is that the dust has a lot of iron in it. This iron acts as fertilizer for certain types of bacteria which, in turn, fix a lot of nitrogen from the air into the water in a form that the red tide causing algae just love. The result is a red tide algae bloom out in the Gulf. This is a cycle we see almost every year.

If the bloom stays offshore, it really isn’t a big problem as it is fairly dilute and isolated in the deep water areas (where the fish can get away from it) with lots of circulation. The problem arises when we get onshore winds that blow this algae bloom against the west coast beaches of Florida (where I live). Then the algae becomes concentrated by the shallow waters (where lots of fish live) and barriers of the beaches. Then it is a big problem. This year is particularly bad, but not completely a surprise. We have had major fish kills in the last 30 years and the locals know every few years there will be at least some problems for a limited period. But, we also have hurricanes periodically and expect them, too. It still doesn’t make them any less destructive or us any less miserable.

This year we have a further problem.

The areas of Lee and Collier Counties (e.g., Ft. Myers, Naples, Marco Island) are experiencing a separate blue-green algae bloom in the local rivers like the Caloosahatchee and connecting canals, estuaries and inlets. This seems to be caused by nutrient rich water being discharged by the Army Corps of Engineers from Lake Okeechobee (to prevent the deteriorated dikes from collapsing if we have a rainy hurricane event) into the Caloosahatchee River. Lake Okeechobee is fed by the Kissimmee River which drains the Kissimmee River watershed. There is a lot of farm runoff, as well as sewage, septic and storm water drainage from residential areas, all of which are full of nutrients, draining into the Kissimmee as well as the Lake. This is what is going into the Caloosahatchee and apparently causing the algae blooms.

At one time, there was a plan to create excess nutrient absorbing “filter” marshes around the lake by buying up and flooding farmland, but whatever was done (if anything) has not solved the problem. Also there are several other available outlets for Lake Okeechobee (the Hillsboro Canal and the Miami Canal as well as the Everglades themselves), but the main discharges seem to be coming to the Caloosahatchee.

So what is the connection to the bloom and climate change? For this answer I will turn to the trusted Washington Post:

“K. brevis — the algae affecting Florida — has an interesting response to rising temperature. It thrives in water temperatures up to about 83 degrees, but if it gets much warmer than that, the algae doesn’t grow as quickly. However, researchers have found that K. brevis can tolerate higher temperatures and grow faster given more carbon dioxide. Atmospheric carbon dioxide surpassed a concentration of 400 parts per million in 2015 and will continue to rise as society burns more fossil fuel.”

Despite ocean temperatures getting well above 83F this summer K. brevis has thrived. In conclusion, we have two problems here, fertilizer pollution and carbon pollution, which feed the red tide bloom, probably making this year’s outbreak around Florida much longer and more deadly than otherwise. It’s up to politicians and those electing them to stem pollution on both counts through some sort of regulation. At the very least elect politicians who believe in science. It’s your choice, your future.

Here are a couple of climate items from Saturday:

“Exxon was hoping to strike a discovery of a billion barrels or more in Africa: what is known in the industry as an elephant” Exxon Is Betting On Africa For Its Next Big Find | http://OilPrice.com  https://oilprice.com/Energy/Crude-Oil/Exxon-Is-Betting-On-Africa-For-Its-Next-Big-Find.html?utm_source=tw&utm_medium=tw_repost … #oilprice

400,000 customers are without power across the Midwest at this hour after a day of very strong winds in the region:Top Gusts:
66 mph Dakota, IL
65 mph Somonauk, IL
63 mph South Haven, MI
63 mph Lafayette, IN
61 mph Chicago O’hare 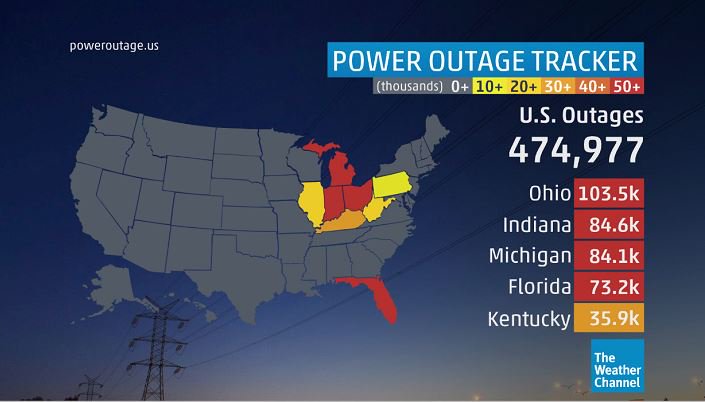 Fairbanks finally gets snow! It’s latest first snow by more than a week, though in the past century there is no significant trend in when that glorious event occurs. #akwx #snow @Climatologist49 @newsminer @tomhewittnews