Are We Engineering Our Own Demise With New Oil Finds?

The most dangerous combination of human greed, shortsightedness, planning and cunning in human history appears to be coming from some “brown” energy companies during 2018. This is not an overstatement considering that the climate is at stake, with action or inaction potentially killing millions if not billions of people over time later in the 21st century and beyond. Those that do manage to live and survive beyond the year 2050 could be faced with a harsh environment in which only the very rich would have the resources to face in comfort, and that’s provided that modern wars over resources don’t break out. So what did the old Climate Guy see last week to make me write the first sentence of this post? Take a look:

“Exxon was hoping to strike a discovery of a billion barrels or more in Africa: what is known in the industry as an elephant” Exxon Is Betting On Africa For Its Next Big Find | http://OilPrice.com  https://oilprice.com/Energy/Crude-Oil/Exxon-Is-Betting-On-Africa-For-Its-Next-Big-Find.html?utm_source=tw&utm_medium=tw_repost … #oilprice

Exxon is betting very big on Africa for its next big find, the supermajor’s head of exploration, Stephen Greenlee, told Bloomberg in an interview. In fact, Greenlee said, Exxon was hoping to strike a discovery of a billion barrels or more in Africa: what is known in the industry as an elephant, Bloomberg’s Kevin Crowley reports.

The U.S. Geological Survey estimated that two years ago there were at least 41 billion untapped barrels of crude oil in sub-Saharan Africa alone. Exxon is focusing on western and southern Africa in its exploration work and has been amassing stakes in oil and gas prospect in Ghana, Mauritania, Namibia, and South Africa.

In Ghana, Exxon tried to buy Kosmos Energy’s stake in the giant Jubilee offshore field in 2009, but the deal was blocked by the Ghana authorities. Last year, the supermajor bought straight from the Ghana government exploration rights for an adjacent block, and plans were to begin working on it this year.

In Namibia, it bought a 30-percent stake in an offshore exploration license. Although no oil has yet been discovered in Namibia, there is a theory that its offshore basins may share characteristics with Brazil’s Campos and Santos—Brazil and Namibia were part of one whole a few billion years ago.

Exxon is also buying seismic data. “We’re acquiring large amounts of seismic data with the idea that in the future one or two of those are going to turn out to be the next Guyana,” Greenlee said. “These are large acreage positions and they’re in areas that we think have promising opportunities for hydrocarbon systems.”

Perhaps the Guyana discovery—an elephant containing an estimated 4 billion barrels of crude—spurred hopes for another one in less explored parts of the world that are nevertheless close to established production sites such as Nigeria and Angola.

Historically what some optimistic climate scientists haven’t realized is that via better and better cunning drill technology the year of “peak oil” has been delayed since the 1970s. Fracking has also led to more discoveries of pockets of natural gas, another item bad for the climate. Usually where oil is found natural gas follows. It has been proven since the 1990s that the ancient continental seam between South America and Africa is a good bet to find brown energy, and newer fracking technology only makes for easier access:

Geologically as Africa and South America drifted apart the fracture zone on South America’s east coast and Africa’s west coast left a rift where ancient fossil fuels were more exposed than in interior areas. Now Exxon and others want to exploit any new findings, with Namibia located along the southwest coast of Africa being the next target. I know that massive findings of oil have already been discovered in Brazil and Angola the last couple of decades.

The same type of plate tectonics also come into play on the eastern side of the continent. Take a look:

Could Somalia become the next Saudi Arabia sometime much later this century? That’s a good question.

As of 2013, though, oil has barely been drilled and proven as a reserve in Africa compared to other regions looking at this pie chart:

Let’s say that geologists, who all oil companies employ to find brown energy, are correct and Exxon strikes it rich in Africa. How much more would billions of barrels of African oil add to concentrations of CO2 in the atmosphere…20 parts per million…50 ppm…100 ppm or more? That’s a very big question that we don’t know because we have no idea how vast potential proven reserves could or will be. Countries like South Africa appear to be chomping at the bit for prospects:

Who can blame poorer countries like Namibia, South Africa, or even failed states like Somalia to make a relatively quick buck off oil? Most people in Africa want to join their 21st century counterparts elsewhere in the world as far as modern conveniences and technology go. Too, some of those in higher office are given into temptation from money that oil entails. Just about everywhere oil and coal are mined government corruption follows. It’s really up to Exxon and others to clean up there act, becoming green, leaving petroleum in the ground. Will they? Being an astute observer of human and corporate behavior I don’t think so unless a higher power, government, employs some sort of coercion like a tax. Will homo sapien’s cunning with drilling tech actually do the species in, or will we be really smart?

What is the best solution in the face of increasing petrol finds? A worldwide carbon tax, but again any implementation and even collection of such a tax would encounter strong headwinds from greedy people. Perhaps the planet will begin to warm up so fast during the 2020s that all people from every corner of the planet will demand such a tax from their governments. Who, though, wants to raise taxes on themselves raising the price for electricity or gasoline? I hope that my climate change friends are not undergoing some sort of denial themselves in regards to human nature. All I can write after today’s essay is oye ve.

Whatever happened to that dire forecast of more heavy rain in Texas later this week? Latest operational models do have major Hurricane Wila making landfall along the central Pacific Mexican Coast with tropical moisture once again spreading north from this system unto the Lone Star State on Wednesday, but now forecast lighter rainfall lasting for only a day than what my crystal ball showed last week. Still, any rainfall will be unwelcome:

#Willa rapidly intensified and is expected to strike Mexico as a #hurricane this week. Tropical Storm #Vicente will also pose a threat of flooding: https://wxch.nl/2yU56Fk 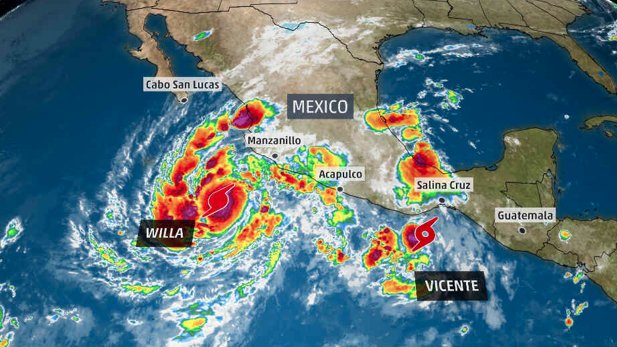 Here is one climate tidbit from Sunday:

This is the reality of our warming world and why half a degree matters. @WWF @350SouthAsia