Watching For The Next El Nino

Looking at the latest sea surface temperature chart it is time to question whether or not the next El Nino episode is upon us:

One can clearly see a distinct positive thermal anomaly feature stretching from Peru westward into the central Pacific, a tale tale sign that an El Nino has blossomed, but scientifically has it? From what I am seeing on line the answer is we are close, but no proverbial cigar yet…at least not as of early November. Today I’ll be referring to and quoting from the following post, which also refers to the following NOAA data:

“It looks like an El Nino. It smells like an El Nino. But we still aren’t in an El Nino yet. ENSO-neutral conditions persist at the start of November as NOAA’s Climate Prediction Center(CPC) continues their El Nino Watch, giving 80% odds of an El Nino developing this winter. Australia’s Bureau of Meteorology issued an El Nino Alert, assigning 70% odds of development— so what’s the holdup?”

“While the ocean is all-in on El Nino, the atmosphere hasn’t checked its spam folder and has been slow to respond. Remember, it is this ocean-atmosphere interaction that defines ENSO events (El Nino and La Nina), providing the signals — changes in weather, storm patterns, and swell — that we associate with each of the events. Warmer-than-normal Pacific equatorial waters do not make for an El Nino alone.” 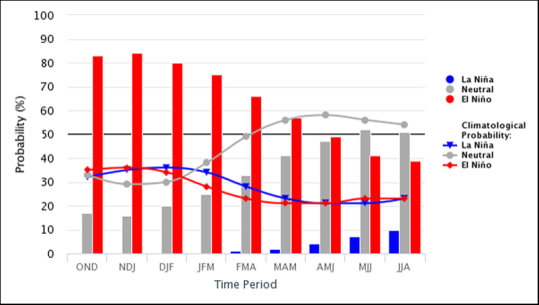 The red bars tell you what you want to know — the expert-forecast odds of an El Nino are 80% for winter, declining slightly into the 70% range for spring 2019. The red line shows the climatological chance of El Nino, which is much lower. The betting line and experts heavily favor a weak El Nino this winter and spring. Source: IRI 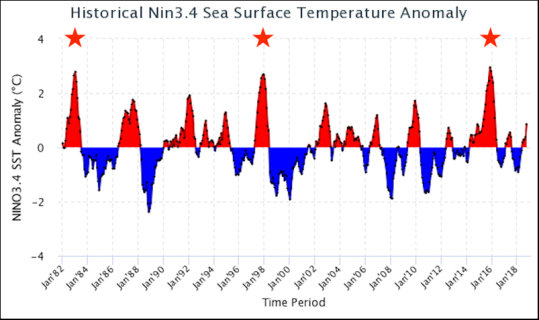 The three stars mark memorable El Nino-induced winter swell seasons. ’82-’83, ’97-’98, and ’15-’16 were all very strong El Nino events. Now compare to our current status on the far right — that’s why there is no guarantee, or even expectation, of a comparable winter to great seasons gone by.

Given the latest data sets I would expect an announcement that the Pacific is undergoing an El Nino very soon. To be honest, I thought we would see an El Nino by September io October, but the thing has been delayed. Back in late 2013 forecasters were expecting a strong El Nino by mid 2014, but that episode was delayed be a few months as well.

Looking at the last chart strong El Ninos rhythmically occur about once every 15-16 years. We are due for only a weak to moderate episode looking at the chart. It’s very difficult for forecasters to pin point exactly how strong an El Nino episode will be given today’s state of the science.

Mike Watson, Atlantic Lead Forecaster, agrees that this is a tough one to predict. “I don’t think we’ll see much of an El Nino influence through December on the East Coast. We will know more once the next Kelvin wave makes its way across the Pacific by late December. In the meantime, it’s likely other climate drivers will play the greater role. It would not surprise me to see some El Nino-influenced, enhanced storm activity in 2019 after things have kicked into gear. With the current North Pacific SST pattern, it makes me wonder if the positive PDO-like pattern will be the main driver for what we see this winter with a weak El Nino expected.”

I’ll let all know when we finally have a definitive announcement and prediction of effects for this winter.

Here is some weather and climate news from Saturday:

A few more dry & smokey days to get through before desperately-needed significant rains arrive around Thanksgiving across much of California. Also: thoughts on #CampFire tragedy. #WoolseyFire #CAwx #CAfire https://t.co/VGoCG6wDa2

Footage of escape from #Paradise during #CampFire is absolutely terrifying & gut-wrenching (dad, kids & dogs all made it out safely…but lost everything). A similarly life-changing experience has now been experienced by *tens of thousands* of Californians.https://t.co/5N81tJ16v7

#Smoke taking its toll. #SanFrancisco is the most polluted city on Earth this hour.https://t.co/4WhdjqTDHp pic.twitter.com/GmHe73Oc6C

California's smoke is so bad the cable cars are shut down and the Stanford-Cal game postponed for the first time since JFK's assassination. But the real story is the long-term damage to the lungs of millionshttps://t.co/WRb69fD2JF

The Scandinavian blocking will soon culminate with massive 586 dam ridge.

This means that the 500 hPa pressure level is located more than half a kilometer higher than normally, and corresponds the heights observed usually in deep tropics.

"London Has Fallen". Not quite but @ExtinctionR blocks five London bridges in their efforts to move #ClimateChange up the political & societal agenda. By all accounts they are gaining momentum.
https://t.co/Y7VrJKV7Q0#ExtinctionRebellion#ClimateCrisis #EnergyTransition

A new lawsuit pits a coalition of commercial fishers against 30 fossil fuel companies, including Exxon, Chevron, Shell and BP.https://t.co/F3KvzlvaR6

The Science Of Why A Modest Snowstorm Caused Havoc On The East Coast via @forbes https://t.co/Ubz5G95wrx

"Why aren’t we doing more on negative emissions? It’s the same reason that we aren’t doing more of deliberate mitigation. The price on carbon is inadequate, and our decision to solve the problem hasn’t become sufficiently firm yet." https://t.co/Fw7YCnfhUU

The monthly GISTEMP surface temperature analysis update has been posted. The global mean temperature anomaly for October 2018 was 0.99°C above the 1951-1980 October average. https://t.co/EDTZWL4pYk pic.twitter.com/iCGyUo2ggl

These folks do very good work, pls kick in to help them! https://t.co/FNWcesKL2p

Widespread rainfall is forecast to develop around the middle of next week, and up to an inch of rain could fall on Wednesday. When was the last time an inch of rain fell in one calendar day? #CAwx #BayAreaWx #BayAreaRain pic.twitter.com/HpFA7pUsVP