Welcome everyone to December and meteorological winter in the Northern Hemisphere. The biggest news out of the United States today was the passing of the 41st President, George Hebert Walker Bush, at age 94. I’m an unapologetic liberal when it comes to politics, understandably so due to how the issue of climate change is being treated from both sides of the political spectrum, but I can appreciate some conservatives looking at how well they lived, and how much they contributed to society from a historical perspective. In the past, for example, I’ve noted that the world needed such conservative figures as Winston Churchill, for obvious reasons, and Teddy Roosevelt, to help conserve wild places within the U.S. To me “conservatism” used to mean to help conserve and preserve things from the present and past such that future generations will benefit. Present so called conservatives, such as Trump, have lost there way, not taking advice from scientists, which all sides of the political spectrum used to respect. President George H.W. Bush, an honest man with great integrity, was not one of today’s conservatives.

Let’s get in our “way back” machine and take a look at the state of what climate policy was like between 1989-1993, the time when George H.W. Bush was President. After living as a young man through my 20s and early 30s through the Reagan and Bush Administrations I’m not surprised to see this article published today by Dr. Marshall Shepherd:

I awaken to the news that the 41st President of the United States passed. President George H. W. Bush was a Republican, a conservative, and even had ties to the fossil fuel industry. However, you might be surprised at some of the positive things about the environment and climate change that happened under his watch. My perspective here is not about his broader ideology or whether we agreed with everything that he said or did.  I often didn’t. Herein, I provide a respectful analysis of the climate change and environmental legacy of President Bush.

Ohst, I am certain that there are many things that I will overlook herein. I am also certain there were policies and actions by President Bush that were harmful to the environment and climate as well. However, there were major actions that deserve highlighting as we reflect on the loss of this statesman.

One of his most important contributions is related to the recently released 4th National Climate Assessment. President Bush was a central figure in this activity. In fact, some have asked me why the Trump administration would release a report that the current president says he doesn’t believe. The short answer: It’s the law. George H.W. Bush’s Administration and the Congress of that time period deserve credit. By the way, science is not a “belief” system so even if you don’t believe in gravity, guess what happens when you fall from a ladder. The National Climate Assessment reports are not about “belief systems” or “tooth fairies.” They are about science and policy. As I wrote recently in Forbes,

The Global Change Research Act of 1990, signed by President George H.W. Bush, also “requires the Council, at least every four years, through the Committee, to submit to the President and the Congress an assessment regarding the findings of the Program and associated uncertainties, the effects of global change, and current and major long-term trends in global change.” There have been four assessments to date including the most recent report. The 4th Assessment, based on the most current peer-reviewed science evidence, established that our economy, public health, national security, water supply, and other societal sectors are suffering because of climate change. The report was rather candid in its “here and now” perspective. Climate change is often framed as “far in the future” thing. Ironically, scientists are often framed by some contrarians as alarmists, but my experience is that my scientific colleagues have been overly conservative. Many changes are happening at a more accelerated rate than expected. Climate expert Don Wuebbles of the University of Illinois was an author on the recent assessment. He echoed this sentiment recently in an Associated Press article written by outstanding science journalist Seth Borenstein. Wuebbles said, “I don’t think any of us imagined that it would be as bad as it’s already gotten.” 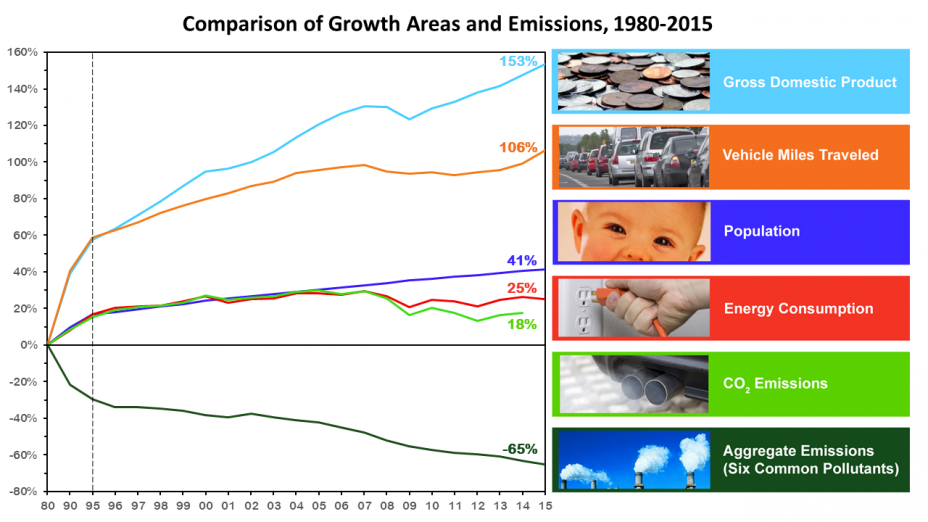 “In June 1989 President Bush proposed sweeping revisions to the Clean Air Act. Building on Congressional proposals advanced during the 1980s, the President proposed legislation designed to curb three major threats to the nation’s environment and to the health of millions of Americans: acid rain, urban air pollution, and toxic air emissions. The proposal also called for establishing a national permits program to make the law more workable, and an improved enforcement program to help ensure better compliance with the Act.”

By the way, have you heard of this challenging “little thing” called the Ozone Hole? As a brief review, the ozone layer within the Stratosphere absorbs harmful ultraviolet (UV) radiation from the sun. Without it, UV radiation would be detrimental to anything, including us, living here. Science (by the way, what a novel concept) revealed that certain ozone-destroying chemicals were creating a whole. Ultimately, these scientific revelations led to the international Montreal Protocol limiting the use of such chemicals. The Clean Air Act of 1990 with Title VI sought to protect the ozone layer. It specifically required the EPA to regulate  ozone-depleting substances like hydrochlorofluorocarbons (HCFCs) chlorofluorocarbons (CFCs), methyl bromide, halons, carbon tetrachloride, hydrobromofluorocarbons, chlorobromomethane, and methyl chloroform.  Many of these things were commonly found in air conditioning refrigerants and spray cans used by the public. As with the current climate change- fossil fuel industry “tug-and-pull,” there was push back to the Montreal Protocol and limits on ozone-depleting substances. The Act also  ensured the U.S. commitment to the Montreal Protocol. Recent reports show that these things have worked and the Ozone Hole is starting to “fill in” but will still take several more years.

The original Clean Air Act of 1970, signed by Republican President Richard Nixon, was probably the most comprehensive federal air pollution legislation of its generation. It established National Ambient Air Quality Standards (NAAQS) that the EPA could use to regulate emissions into the air.  The graphic above clearly shows that our air is “cleaner.” The Clean Air Acts and Amendments of 1970 and 1990, respectively, are directly attributable to this progress. However, it is important to understand that cleaning the air or mending the Ozone Layer is a separate and distinct challenge from the looming and gigantic probably of climate change associated with excessive greenhouse gases.

Dr. J. Marshall Shepherd, a leading international expert in weather and climate, was the 2013 President of American Meteorological Society (AMS) and is Director of the University of Georgia’s (UGA) Atmospheric Sciences Program. Dr. Shepherd is the Georgia Athletic Association Distinguished Professor and hosts The Weather Channel’s Weather Geeks Podcast, which can be found at all podcast outlets. Prior to UGA, Dr. Shepherd spent 12 years as a Research Meteorologist at NASA-Goddard Space Flight Center and was Deputy Project Scientist for the Global Precipitation Measurement (GPM) mission. In 2004, he was honored at the White House with a prestigious PECASE award. He also has received major honors from the American Meteorological Society, American Association of Geographers, and the Captain Planet Foundation. Shepherd is frequently sought as an expert on weather and climate by major media outlets, the White House, and Congress. He has over 80 peer-reviewed scholarly publications and numerous editorials. Dr. Shepherd received his B.S., M.S. and PhD in physical meteorology from Florida State University.

Yes, as noted by Dr. shepherd’s fine article President George H.W. Bush did a lot of fine things for the planet based on sound science.

It's ironic that the U.S. set itself apart from other G20 nations on climate on this particular day…given that it was the late George W. Bush who joined other world leaders in signing the landmark United Nations Framework Convention on Climate Change https://t.co/stO4u5Z631

Unfortunately by the 1980s and early 1990s the petroleum industry had its claws in all levels of U.S. government confusing the issue such that both Reagan and Bush Sr. didn’t go far enough towards converting brown based energy and infrastructure towards green. Imagine if this did begin to happen in earnest around 1990 such that in an alternative world just about all vehicles were electric and all power necessary to keep civilization thriving came from solar and wind by 2018. By doing so we could have kept CO2 levels below 400 parts per million. I’m sure that both the ghosts if Reagan and Bush Sr. would now approve.

Well, it’s up to the living to at least try to create this vision such that after the next 30 years in 2049 we can keep CO2 levels below 450 parts per million…a figure that might be too high to prevent +2.0C warming above preindustrial conditions, but perhaps allowing adaption and not destruction of all civilization. We will have to fight against the current Administration though: https://insideclimatenews.org/news/30112018/fact-check-trump-climate-science-denial-national-assessment-sanders-global-warming

Quoting this Inside Climate News Article:

President Donald Trump’s administration and its allies in the climate denial community have mounted a campaign to try to discredit the Fourth National Climate Assessment, an effort that has escalated in intensity since the report’s release during the Thanksgiving weekend.

Trump could not halt the peer-reviewed assessment by the U.S. government’s climate scientists. The report—the most comprehensive and authoritative report on climate change and its impacts in the United States—is mandated by a law Congress passed in 1990.

But after an attempt to minimize the attention it received, by slipping it out to the public on the afternoon of the Black Friday shopping holiday, Trump flatly rejected its central finding that global warming is causing ongoing and lasting economic damage. “I don’t believe it,” he said.

Still others do have this view of George H.W. Bushes’ Presidency:

During the campaign, Bush promised to use the “White House effect” to battle the “greenhouse effect.”

After reading Dr. Shepherds’ article I have a new respect for George H.W. Bush. I have sincere best wishes for his grieving family. Again, rest in peace President Bush.

Doctors are already seeing health effects of climate change, and it's only going to get worse without climate action, a group of experts warn.https://t.co/r97cCR46YJ

As we close out the 2018 Atlantic #Hurricane season the ACE (Accumulated Energy) index was above normal in all Northern Hemisphere Basins. NH ACE was 1.5x above normal. https://t.co/9va23nGrRO #WarmingOceans pic.twitter.com/LSCypckklF

Humans have cut down half the trees on Earth since the dawn of agriculture – over 3 trillion of them.

This huge loss holds the potential for massive reforestation today, which would take up large quantities of atmospheric carbon dioxide.#climatechange. https://t.co/zGjOhpI0CM

The title does not quite encapsulate the article. Worth a read. “While most people in most countries accept the truth of climate science, they don’t accept its implications. What can be done to change that?” https://t.co/d16cwb6QkZ