The Five Hottest Years On Record… A Nasty Trend

Today is the last day of November so obviously there is only one month to go before climatologists can process all temperature data for 2018. We can’t definitively declare that 2018 will be the 4th warmest year globally, on record, because it’s not entirely out of the realm of possibility that a few weather quirks related to the jet stream will produce a very cold December in a few locations, bringing yearly averages down. Nevertheless, current sea surface and land temperatures would point to overall warmth continuing well beyond just one more month. The best source and graphics to see how global averages are doing comes from NASA and more specifically climatologist Gavin Schmidt. Let’s closely peruse this graphic produced yesterday:

With 2018 almost in the bag, what are the prospects for global temperatures in 2019? Using the current forecast of El Niño conditions for DJF from @climatesociety I predict… 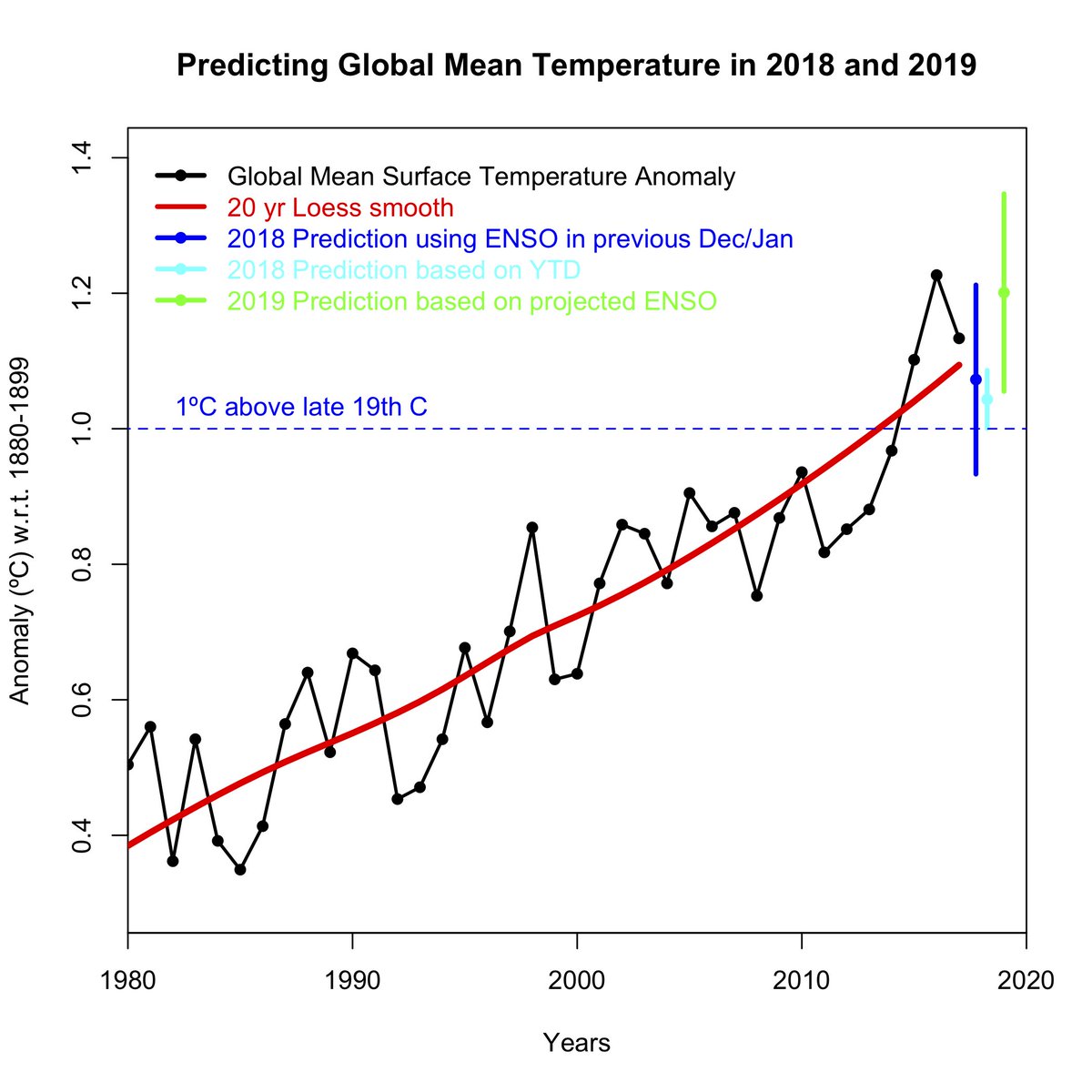 On Gavin’s easy to read chart we clearly see that looking at individual yearly points 2018 should end up 4th warmest with  2015 3rd, 2017 2nd, and 2016 getting top billing. Further down the graph 2014 was 5th warmest. So,  the last five years were the five warmest years in historic records, an unprecedented statistic. The last four years including 2018 ended up slightly above +1.0C above preindustrial conditions. Don’t forget that most climatologists and policy makers via the Parris Accords are desperately trying to keep global averages below +1.5 to +2.0C with practically no one thinking that the climate will be stable above +2.0C. Gavin predicts that 2019 will be warmer than 2018 due to a burgeoning El Nino raising sea surface temperature averages, eventually warming the atmosphere, as well. Just how warm will depend on the strength of the El Nino, now forecast to be weak to moderate.

This chart has always fascinated to me as a forecaster. Since 1980, the year many climatologists point to as the start of truly discernable, fairly rapid global warming, we have not seen three consecutive years of a cooling trend. If 2019 became the third consecutive year of slight cooling, the streak would break. Besides the El Nino we can see why Gavin would predict that 2019 may be warmer than 2018. The overall warming trend has been unrelenting.

Yes, we are looking at very subtle differences in global averages, so why is this important?  Because already at about +1.1C above preindustrial conditions we are now seeing very active tropical regions with historically stong hurricanes like Michael, more widespread heat waves and drought as happened in Europe this year, and more horrific wildfires like those across California the last two years. I think we have just entered an era when simultaneous horrific climate change weather events will be taking place since the “spike” year of 2016 when the last strong El Nino sent averages above 1.0C above preindustrial conditions. I can’t recall before 2015 when the planet had so many heat related problems, seemingly in one warm season either in the Northern or Southern Hemispheres. Just a few more ticks up the chart we will see the planet go beyond +1.2C by the early 2010s barring some not forecast uptick in volcanic activity. Would a difference between  +1.0 and +1.2C mean the difference between relatively few and widespread planetary crop failures? We will see.

For another perspective on the last four years of global warming see:

Indeed these quoted two paragraphs from the Guardian article reinforce my last point:

The warming trend is unmistakable and shows we are running out of time to tackle climate change, according to the World Meteorological Organization, which on Thursday published its provisional statement on the State of the Climate in 2018. The WMO warned that, on current trends, warming could reach 3C to 5C by the end of this century.

Elena Manaenkova gets the last word:

“These are more than just numbers,” said Elena Manaenkova, the WMO deputy secretary general. “Every fraction of a degree of warming makes a difference to human health and access to food and fresh water, to the extinction of animals and plants, to the survival of coral reefs and marine life.”

Here is some other weather and climate news from Friday:

Only two more days (through Dec. 1) to get $5 off this new book for young people by my friend @climateguyw Guy Walton. Click below.https://t.co/wDVlQPdWL3

After 24 hours of my first alert models continue to paint an ugly picture for the mid-South for the second week of December. An icy "wedge" event continues to be possible from North Georgia into the Carolinas. pic.twitter.com/enaTtWSFWJ

Defying outlooks for an average-to-tepid season, the Atlantic spun up 15 named storms in 2018, including two catastrophic U.S. hurricanes https://t.co/IBsJ6pgMRO pic.twitter.com/3zCmlqaIdF

Scientists & engineers launched “InSight” from Earth (a moving platform) across 300million miles to arrive where Mars (a moving target) will be seven months later, landing safely to do geophysics at the Martian equator. And you have a problem listening to us about climate change? pic.twitter.com/a6gx3jmM2z

In just 9 days, many locations in California have wiped out their water year (since 10/1) rain deficit #cawx

Snow covers about 1/3 of the US as we end November with above normal snow cover noted in the Northeast, Midwest, Rockies, and even the Sierras after a slow start to the season. More coming to parts of the Plains/Midwest soon. Depth Maps via NOHRSC https://t.co/HNjTC1i4Y9 pic.twitter.com/BvXpGcqnHK