I’m waking up today to another typical drab, wet scene for winter in Atlanta with temperatures in the low 50s. What is not so typical is how many days I’ve awakened to dampness, not being used to constant barrages of precipitation since growing up here during the 1970s. I believe that I am experiencing climate change first hand as 2018 comes to a close. On a positive note at least moisture is not interacting with freezing air, otherwise conditions would be much more treacherous. Still, most of us know that mild air holds more moisture than a colder atmosphere, and what has squeezed out over the eastern U.S. has been phenomenal. Here are some quoted statistics that my friend Bob Henson have compiled on his Weather Underground blog: https://www.wunderground.com/cat6/All-Time-Moisture-Records-Pile-2018-Draws-Close?cm_ven=cat6-widget

More than a dozen U.S. locations have seen their wettest year on record—and others are in their top-two wettest—as soggy 2018 enters its final days. Part of the blame goes to Hurricane Florence, which produced the heaviest single-location totals associated with any tropical cyclone in both North Carolina (35.93”) and South Carolina (23.63”). However, the year’s unusual wetness transcended any single event.

Take Wilmington, North Carolina, which was in the grip of slow-moving Florence for several days. Florence dumped a total of 23.02” of rain in Wilmington, by far the largest storm total in 148 years of recordkeeping at Wilmington. Yet the city’s yearly total through Friday was a phenomenal 102.26”, which is an incredible 28.61” above the previous annual record of 83.65”, notched way back in 1877. In other words, even if you took out the rains directly produced by Florence, 2018 still dumped more precipitation on Wilmington than any other year!

Our local observations show the last five years (2014 through 2018) have all had above-normal rainfall in Wilmington, and are collectively the wettest five year period since records began in 1871. While it’s never possible to attribute a single storm or even a particular year’s weather events to climate change, the Fourth National Climate Assessment states ‘Across most of the United States, the heaviest rainfall events have become heavier and more frequent. The amount of rain falling on the heaviest rain days has also increased over the past few decades.’”

Here are some of the larger towns and cities that have already notched records for 2018, as tallied by weather.com through Friday, December 28, based on data from NOAA and the Southeastern Regional Climate Center. All of these locations have at least a 60-year period of record. Some of these new records will be bumped up even more by rains expected between Saturday and Monday. See the weather.com article for additional background on this very wet year.

Another batch of cities had already secured their second wettest year on record as of Friday: 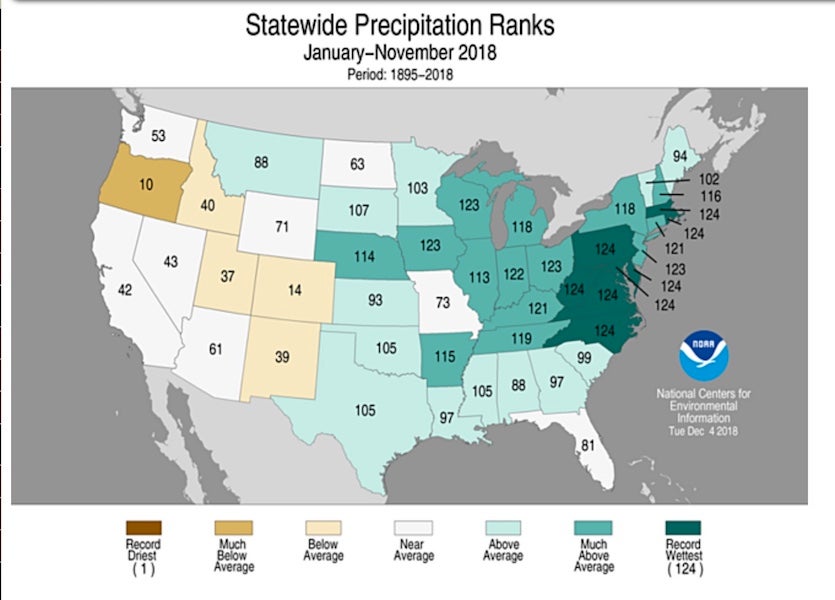 Figure 1.  Statewide rankings for average precipitation for 2018 through November, as compared to each January-to-November period since records began in 1895. Darker shades of green indicate higher rankings for moisture, with 1 denoting the driest month on record and 124 the wettest. Image credit: NOAA/NCEI, via Wayback Machine. (Direct links to NOAA/NCEI were not available because of the ongoing government shutdown.)

I’m quite sure that Mid-Atlantic states depicted in the above graphic will attain “wettest year on record” status.

How does 139" of rain strike you? Dozens of U.S. states and cities are finishing their wettest year on record https://t.co/tZm5EN4WKJ pic.twitter.com/fGBxhXismF

Mild conditions have continued as forecast across the eastern U.S. This December. Just before Christmas, for example,  I saw this set of mild ETs:

While astronomical winter arrived at 5:23 pm this afternoon, the strong southerly flow ahead of the storm moving through the Eastern US resulted in several high temperature records broken today across the Northeast. pic.twitter.com/KNC7oDupJK

Tomorrow will be the last day of 2018 with yet another wet, mild system moving through the East:

I’m noting that it is down right hot across Florida this weekend with well below average cold in the northern Plains.

I’ll be watching for warm “ETs” in the Southesstto be reported looking at this forecast chart:

On a sad note to end the year I need your prayers. A dear colleague and climate champion, Scott Cook from Florida, is in the hospital suffering from pneumonia.

I’ll let all know how he is fairing the next few days.

Here is some more weather and climate news from Sunday:

"It’s not all doom and gloom @climateguyw. This year has also seen some remarkable progress toward a clean energy future."https://t.co/IuUvYuEpnh#EnergyTransition#RenewableEnergy#ExtinctionRebellion #FrackFreeUnited #VoteFrackFree#1o5C #USA

Happy New Year! Climate Change in the Mainstream Media today! Hey, Fox News are you going to double down on denial– or are you going to get on board, and help the US lead the world? Your viewers could make the difference. Make a great New Year's Resolution. pic.twitter.com/KltvGgNqhn

A thorough recap of some US weather and climate disasters in 2018 and their links to a changing climate. My video contribution to @CBSNews https://t.co/3urwhiXJqe

“Disposing of food waste in ways that reduce greenhouse gas emissions is a very big — and very expensive — challenge. But county by county, California is a leader in the effort — and its work could serve as a template for the rest of the nation.” https://t.co/DLxGNwwTJy