Dear Diary. I’ve stated many times that since starting this site I will never share debate news on whether anthropogenic climate change is taking place. The whether or not global warming is occurring ship sailed in the 1970s, if not before that decade. However, from time to time I will expose those who continue to muddy those debate waters in order to continue profiting off fossil fuels. Last night I was enraged enough to send out this Tweet:

Yes, I do listen to right wing media, including Fox News, to see what people who have given into the proverbial dark side of the force are thinking and saying. Thank goodness I don’t have ulcers.

Today I feel the need to share a history lesson on what right wing media has done to the climate crisis, mainly to delay substantial action, much like Dr. Michael Mann has done in his books, The Madhouse Effect and The New Climate War. Here is an article from Vice with an excerpt from another new book, The Petroleum Papers by Geoff Dembicki:

A new book, “The Petroleum Papers”, goes inside a 1991 conference whose goal was to make people doubt climate change is real.

This is excerpted from the new book “The Petroleum Papers” by frequent VICE News contributor Geoff Dembicki, which pulls from hundreds of confidential documents to tell the story of how oil companies have been lying to the public since at least 1959.

On June 5, 1991, an organization closely connected to Koch Industries held one of the world’s first events devoted to climate change denial. Meeting at the Capital Hilton hotel in downtown Washington, D.C., dozens of academics, many of them male, white, and balding, gathered to attack the growing scientific consensus on global warming that James Hansen had helped bring to the public’s attention only three years earlier.

point where it seems surprising that anyone would question it, and yet, underlying it is very little evidence at all,” claimed one participant. “Nonetheless, there are statements made of such overt unrealism that I feel embarrassed.”

“Global Environmental Crises: Science or Politics,” as the conference was titled, was hosted by the Cato Institute think tank. The issue of climate change was so new at this point that most conservative organizations didn’t have a clearly defined position on it.

But the Cato Institute entered the arena of public debate ready to brawl. “Many may find it surprising that respected scientists challenge all of the media-hyped environmental ills,” reads a conference brochure. “Concern about global warming, for example, has become a part of the American psyche—despite scientific uncertainty.” Attendees saw this as an ominous trend: “We are seemingly marching toward a new world order of population control, economic planning and ‘sustainable development.’”

This conspiratorial attack against what was then considered neutral mainstream science was entirely consistent with the Cato Institute’s broader mission and strategy—and with the business interests of Koch Industries. When Charles Koch founded the think tank in the mid-1970s, he proceeded to give it as much as $20 million in start-up funding from his own private fortune during its early years. He saw the organization as the generator of ideas that could build support for a radically limited public sector.

Government’s only legitimate role, Charles said in a speech around this time, is to “serve as a night watchman, to protect individuals and property from outside threat, including fraud. That is the maximum.”

The Cato Institute’s goal of “lower taxes, looser regulations and fewer government programs for the poor and middle class all corresponded to the Kochs’ accumulation of wealth and power,” as Jane Mayer writes in Dark Money: The Hidden History of the Billionaires Behind the Rise of the Radical Right. 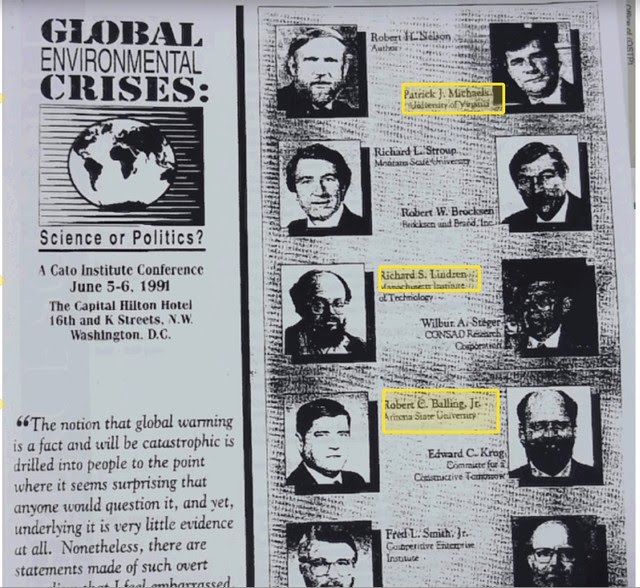 A BROCHURE FROM THE CONFERENCE.

By the 1990s, Koch Industries had grown into a fossil fuel behemoth, employing thousands of people to run a vast network of oil pipelines across the United States and Canada, in addition to gas plants, petrochemical facilities, coal mines, and automobile dealerships. The “cash cow” of this empire continued to be the company’s Pine Bend Refinery in Minnesota, which processed crude oil from Alberta. A Goldman Sachs analysis from the 1980s estimated the value of Koch Industries’ refining assets was as high as $1 billion.

As the processing capabilities of Pine Bend grew, Koch Industries was looking to get more actively involved in the Canadian oil sands, where it had held large exploratory mineral leases for decades. The company was considering building an open-pit bitumen mine in the Fort Hills area of northern Alberta, not far from where major companies such as Imperial Oil and Suncor had their base of operations. The idea was that this new source of heavy oil sands crude could be shipped via pipeline to Pine Bend. “As the demand for heavy crude continues to grow at Koch’s Minnesota refinery, we intend to meet that demand with heavy crude from Canada,” Koch Exploration president Steve Kromer explained.

Koch Industries, like the other oil companies expanding their operations in the Canadian oilsands, had a keen sense of emerging environmental issues that posed a threat to its profits.

In the newfound conversations about climate change happening during the late 1980s and early 1990s, it saw the potential for a vast expansion of government powers culminating in regulations and taxes.

“The economic, societal and personal consequences of such changes have been ignored,” the Cato Institute’s conference brochure argued. “Instead of accepting more regulation and possibly jeopardizing our common future, Cato is bringing together those scientists and policy analysts who offer alternative perspectives on environmental crises.”

Opening the conference in a program entitled “Global Warming: Catastrophic? Manageable Change? Beneficial?” was a biological sciences professor from the University of Virginia named Patrick Michaels. The title of his speech, “The Political Science of Global Warming,” proved apt. Michaels was not a climate scientist, but he had just spent the previous months working on an experimental media campaign to convince average Americans in three test communities that global warming wasn’t real.

That campaign was organized by Southern Energy, a major coal-burning electric utility, as well as the Edison Electric Institute, a utility trade group whose members also relied heavily on coal.

These organizations saw in the public’s newfound awareness of climate change a threat to their polluting business models.

Teaming up with Simmons, a public relations and marketing firm, they conducted public opinion research in Fargo, North Dakota; Flagstaff, Arizona; and Bowling Green, Kentucky. Of five hundred adults interviewed over the phone by researchers, 82 percent claimed to have some knowledge of global warming, a topic that was still quite novel in U.S. media.

Worryingly for the coal utilities, more than one-third of respondents backed “federal legislation without any qualification or cost,” according to campaign documents that were later leaked.

The goal of the utility-led campaign, which was given the name “Informed Citizens for the Environment,” was to shift what people thought and believed about climate change. “Reposition global warming as theory (not fact),” read a strategy document. “Target print and radio media for maximum effectiveness.” The optics of coal interests leading an advertising effort to confuse the public weren’t great, so they decided to “use a spokesman from the scientific community” to deliver their message.

Throughout the spring of 1991, Michaels was their man. The University of Virginia professor met with editors and writers at media outlets across the three test communities and appeared on local radio shows. “We believe it is wrong to predict that higher levels of carbon dioxide will bring a catastrophic global warming,” he claimed. The goal was to make it seem as though these ideas were being generated organically by ordinary people. “Change often begins with one person,” Michaels would say after disputing the validity of climate science.

“You can make a difference by sharing what you’ve learned with others.”

The campaign also hired Rush Limbaugh, the prominent far-right talk radio host, to tape ads that would air with his show. “I know you’ve been seeing more and more stories about the global warming theory,” Limbaugh said in one ad. “Stories that paint a horrible picture. Stories that say the polar ice caps will melt . . . Well get real! Stop panicking! I’m here to tell you that the facts simply don’t jibe with the theory that catastrophic global warming is taking place.”

That was the message Michaels delivered to the Koch-backed Cato Institute conference, which took place only a month after his work on the Informed Citizens for the Environment campaign.

It was still early days in the climate debate, but Koch Industries had already settled on an effective strategy. Getting a credentialed scientist to poke holes in the rapidly strengthening scientific consensus was a useful way to distract people’s attention from the real interests that were threatened by governments taking action on the crisis.

“We can look down the road a little way and see an industry under siege,” one member of the Koch network, an oil executive from Oklahoma named Lew Ward, predicted during this period.

“We are not going to let that happen.”

(As usual, this will be a fluid post in which more information gets added during the day as it crosses

my radar, crediting all who have put it on-line. Items will be archived on this site for posterity. In most instances click on the pictures of each tweet to see each article. The most noteworthy items will be listed first.)