This year Harvey, which produced cataclysmic flooding in the Houston area, was the first of three major Atlantic hurricanes suspected of being affected or strengthened by climate change. In coming months and years many papers will be written on Harvey, Irma and Maria. Today I saw reporting on Harvey from Climate Central here:

From the article: “World Weather Attribution’s scientific analysis found that human-caused climate change made the record rainfall that fell over Houston during Hurricane Harvey roughly three times more likely and 15 percent more intense. WWA is an international coalition of scientists that objectively and quantitatively assesses the possible role of climate change in individual extreme weather events.”

Here's the connection between climate change and Hurricane Harvey pic.twitter.com/1fvV7VfoWq

Here is the first couple of sentences from the abstract:

“During August 25–30, 2017, Hurricane Harvey stalled over Texas and caused extreme precipitation, particularly over Houston and the surrounding area on August 26–28. This resulted in extensive flooding with over 80 fatalities and large economic costs. It was an extremely rare event: the return period of the highest observed three-day precipitation amount, 1043.4 mm 3dy−1 at Baytown, is more than 9000 years (97.5% one-sided confidence interval) and return periods exceeded 1000 yr (750 mm 3dy−1) over a large area in the current climate. Observations since 1880 over the region show a clear positive trend in the intensity of extreme precipitation of between 12% and 22%, roughly two times the increase of the moisture holding capacity of the atmosphere expected for 1 °C warming according to the Clausius–Clapeyron (CC) relation.”

Desperate firefighting continues in the Los Angeles Basin. Extremely dry air has made an appearance in the area again: 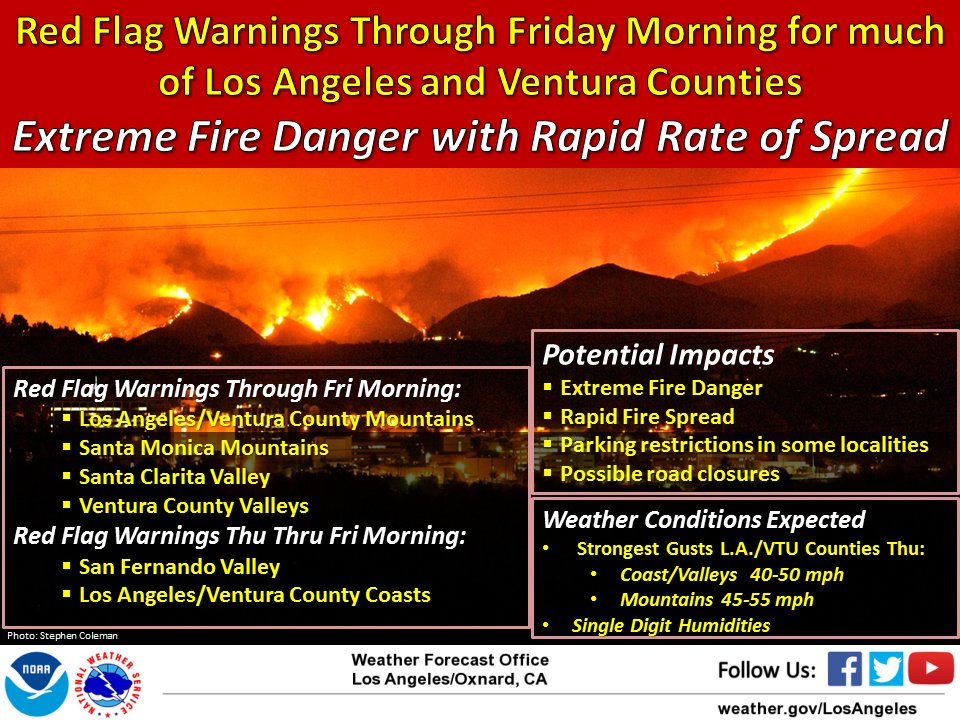 Obviously it takes electric energy to run and use computers, which do contribute to carbon emissions, particularly from non-green grids. Just by writing this post, unfortunately, I have put a little more carbon into the atmosphere. A new article shows how the percent of total emissions in association with device driven communications will increase with time:

“The industry has long argued that it can considerably reduce carbon emissions by increasing efficiency and reducing waste, but academics are challenging industry assumptions. A new paper, due to be published by US researchers later this month, will forecast that information and communications technology could create up to 3.5% of global emissions by 2020 – surpassing aviation and shipping – and up to 14% 2040, around the same proportion as the US today. Global computing power demand from internet-connected devices, high resolution video streaming, emails, surveillance cameras and a new generation of smart TVs is increasing 20% a year, consuming roughly 3-5% of the world’s electricity in 2015, says Swedish researcher Anders Andrae.”

Increasingly powerful computer mainframes, such as the one pictured, use a lot of energy.

After that sour note I do have some short term good news. The U.S. should undergo a weather pattern change soon, which will bring relief to California with the possibility of rain. Here is the latest operational European model indicating a big cool down for the West and major warm up for the East (coming within my 240 good model hour range):

Will Santa bring the present of rain to California? We will see.

Here is some of the latest forecast fire information from Southern California:

This map shows the extent of the #ThomasFire in #Ventura and Santa Barbara counties—231,700 acres burned.
http://lat.ms/2BEIKM4 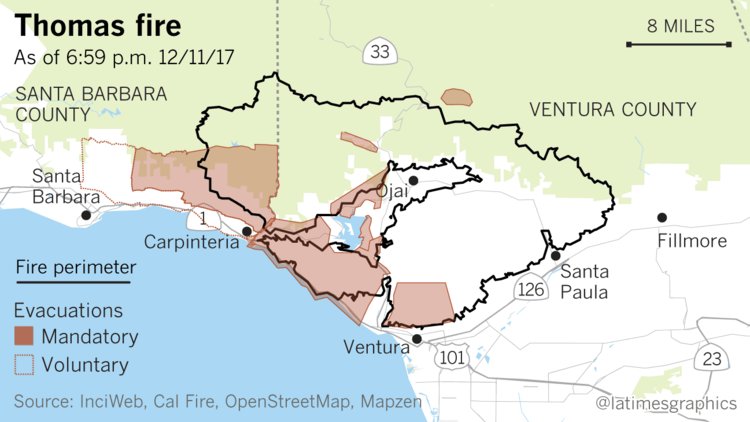 Wow! Smoke from #ThomasFire and other SoCal fires has made it all the way up the coast north of Eureka this afternoon! #cawx 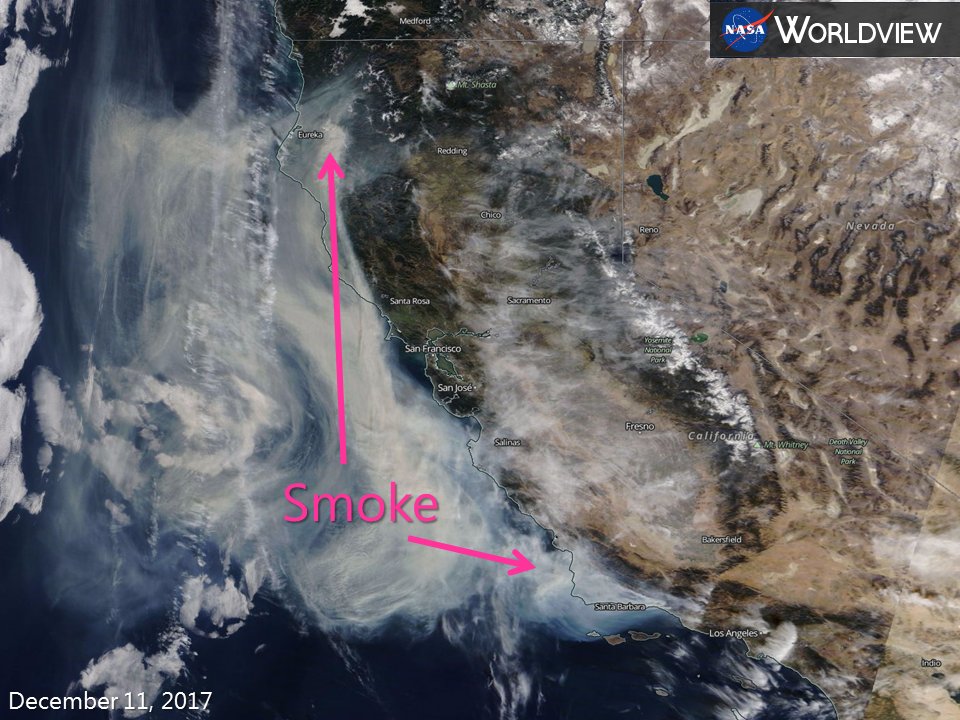 This is a check on global temperatures so far for December 2017:

Coldest air (relative to average) over western Siberia so far this December. Remarkable “warmth” towards Alaska and the Arctic! 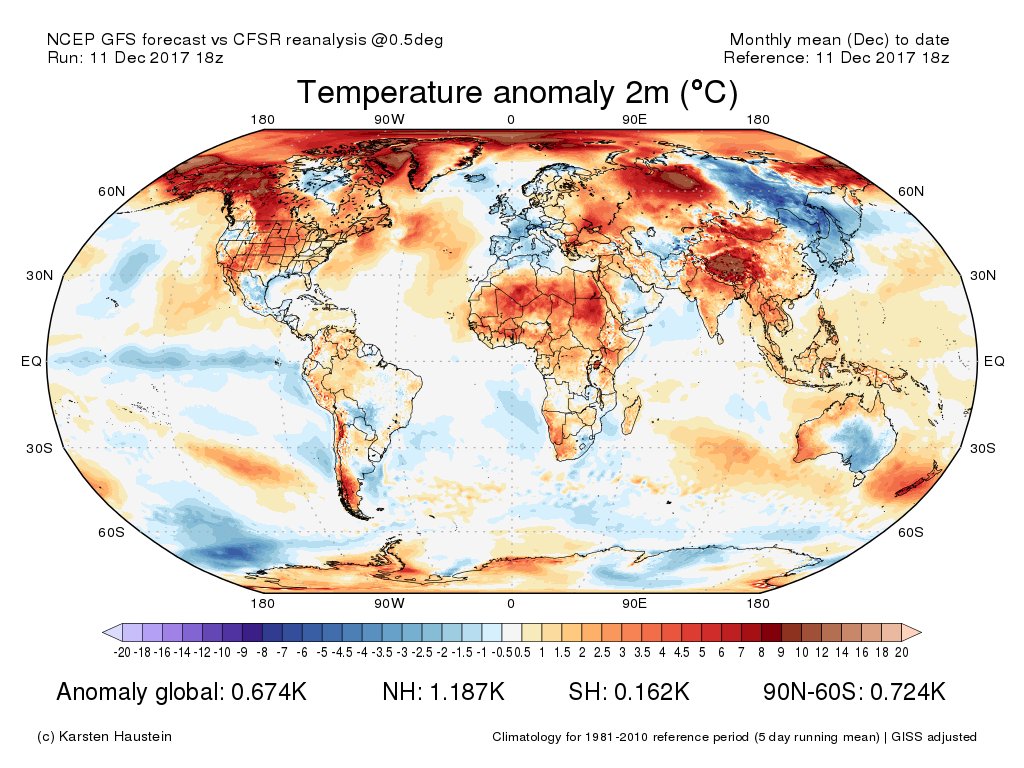 Ouch! Talk about baked Alaska from that resilient ridge. Here is some information from Monday:

Dear diary. Here is an update from this evening from Southern California:

Smoke dispersion from #ThomasFire for 4 PM and 10 PM PST today from latest HRRR model. Smoke will continue to affect much of Santa Barbara County from the mountains to the coast, as well as  Ventura County Coastal areas and possibly West L.A. late today. #LAfire #cawx #SoCal 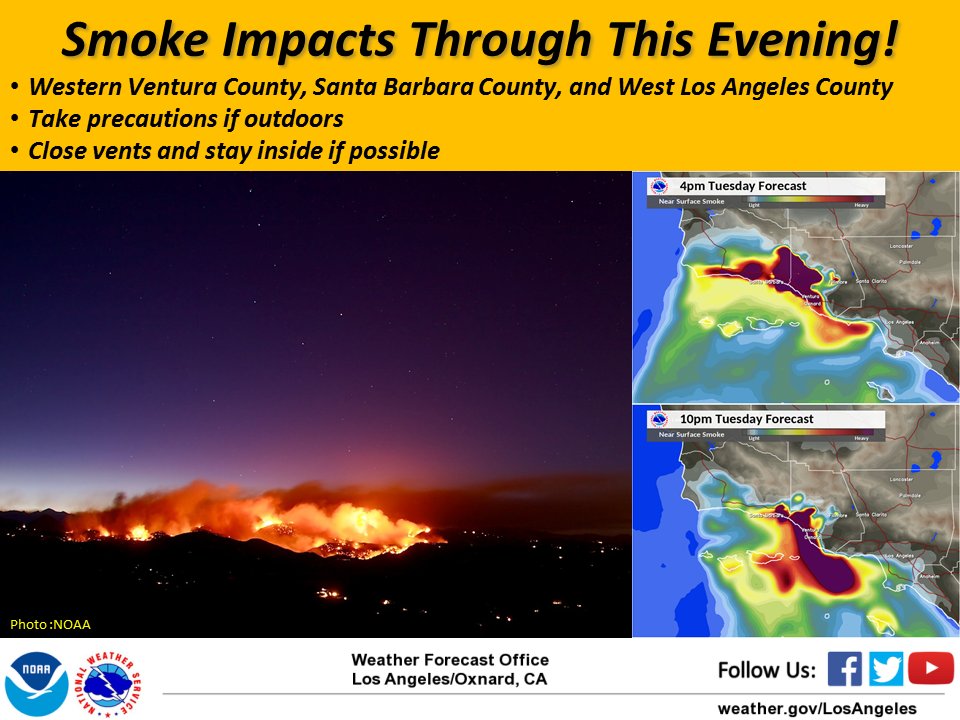 Past Warnings in Association With California’s Current Climate Change Tragedy

I came across an interesting discussion today indicating that past studies have warned about likely climate change effects on California more than ten years ago. Here is one example from climate scientist, Dr. Katherine Hayhoe:

This study published 10 years ago found “consistent shifts in Santa Ana events from earlier (Sept–Oct) to later (Nov–Dec) in the season, suggesting..significant increase the extent of CA coastal areas burned by wildfires, loss of life, and property.
5:59 PM – 7 Dec 2017

The point here is that humanity has been and continues to not heed scientific studies and warnings in association with climate change. Personally I think we needed to right the climate ship around the year 2000 keeping, as Bill McKibben and others have stated, CO2 levels well below 400 parts per million. Obviously its going to be much harder to stabilize the planet’s climate now as we move into the 2020s with CO2 levels getting above 410 ppm, but we need to keep trying. At least green energy technology has come a long way since the turn of the century.

Today as far as short term weather goes I do have a little good news for California, which certainly will help fire fighting efforts if verified:

Around the 20th the ridge west of California may break down enough to allow at east weak states to shift winds on shore, cooling temperatures and raising humidity. There is even an outside shot at light rain.
For now here is what is expected by the Weather Service:

On another note Climate Central has noted my work with record temperatures and come up with this nifty chart indicating how warming has increased substantially across the U.S. in the last 20 years:

Here is the article in association with the graphic:
http://www.climatecentral.org/gallery/graphics/daily-record-highs-are-dramatically-outpacing-daily-record-lows?utm_content=buffer66b6a&utm_medium=social&utm_source=twitter.com&utm_campaign=buffer
From the article and verified by my findings for the United States:

A first look at the data from NOAA/NCEI indicates that 2017 continues the warming trend, as daily record highs are beating daily record lows by a 3.5-to-1 margin so far. Below are some preliminary 2017 stats through the end of November. Visit the NOAA Daily Weather Records tool to get the daily updates on these numbers:

The Thomas fire now burning over 230,000 acres is now the 5th largest fire in California’s history (and this is happening in December!):

Here are some records from smoldering Southern California from Monday:

My little break from writing about the devastating California wild fire 🔥 situation is over. The anomalous snow across the South was nice to report on and look at, but the California fires are causing the worst damage this December much more than any icy, snowy weather. Here is more scientific information on why global warming is leading to a threat from fire year round across California from a Rolling Stone article:

“For years, climate scientists have warned us that California was entering a year-round fire regime. For years, climate campaigners have been wondering what it would take to get people to wake up to the urgency of cutting fossil fuel emissions. For years, we’ve been tip-toeing as a civilization towards a point of no return.

That time is now.

The advent of uncontrollable wintertime megafires in California is a turning point in America’s struggle to contain the impacts of a rapidly changing climate. Conditions that led to the Thomas fire won’t happen every year, but the fact that they’re happening at all should shock us.”

This morning the mentioned Thomas fire was spreading  due to yet more high Santa Ana winds and dry, warm conditions. From Bob Henson:

“It’s now scorched more than 170,000 acres. By far the biggest Calif. fire on record for December–or Nov/Dec, for that matter.” 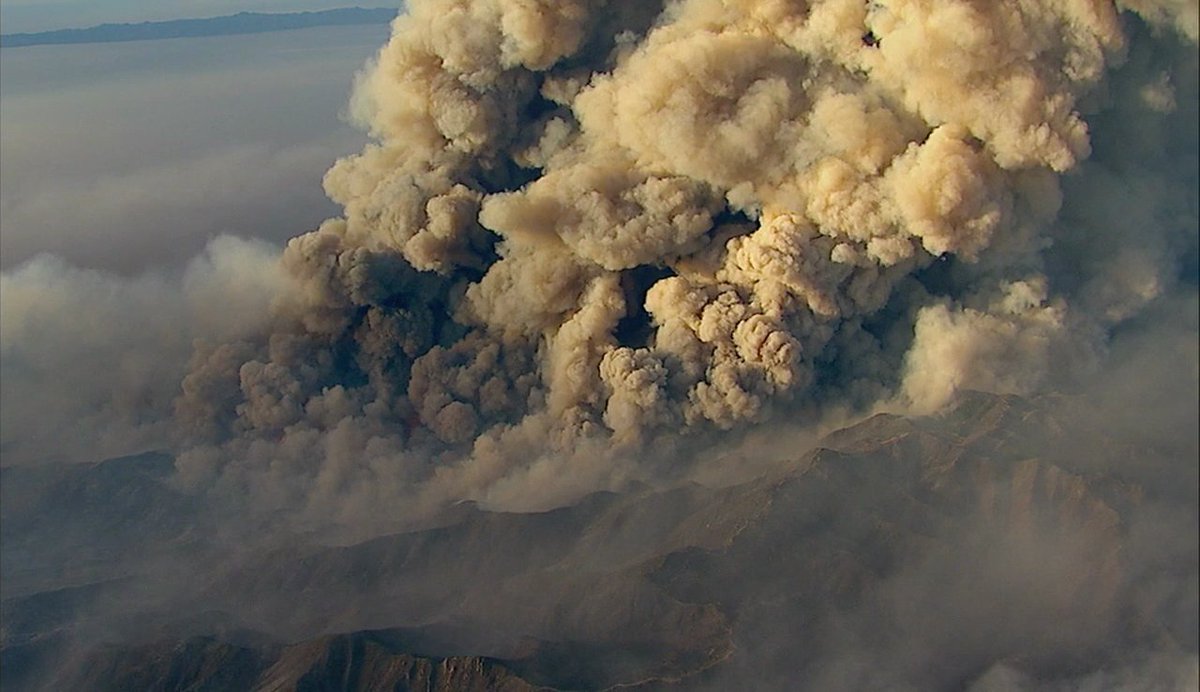 Latest unofficial burn map of the #Thomasfire. The red indicates the most recent activity of the fire focused near the border of #santabarbaracounty and #VenturaCounty nearing #Carpinteria. 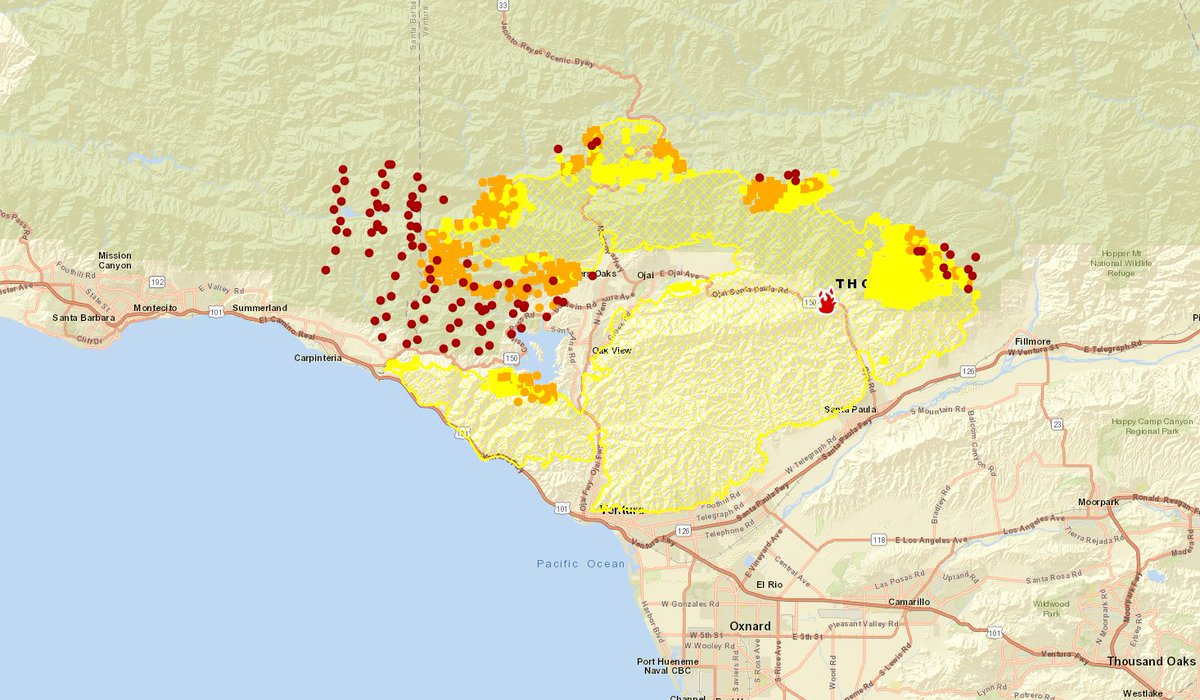 Here is the latest smoke model showing impacts from the #ThomasFire today, especially #SantaBarbara and western  #SanLuisObispo Counties. Very unhealthy air expected. #CAwx
The Los Angeles Fire Department has come up with some good graphical tips for those fortunate enough to find their homes in tact near charred areas:

So is there much hope for a change to this “Rediculously Resilient Ridge” weather pattern? The answer is sadly no. In fact along with forecasting the western ridge to persist, this morning’s operational European model was hinting at another southern snow storm, but I digress:

It’s no surprise to see this forecast from NWS Los Angeles through Monday:

Red Flag Warnings continue in #VenturaCounty and #LACounty through Monday evening and in the #SantaBarbaraCounty mountains through this evening. Listen for and heed evacuation orders. #ReadySetGo#CAwx#ThomasFire 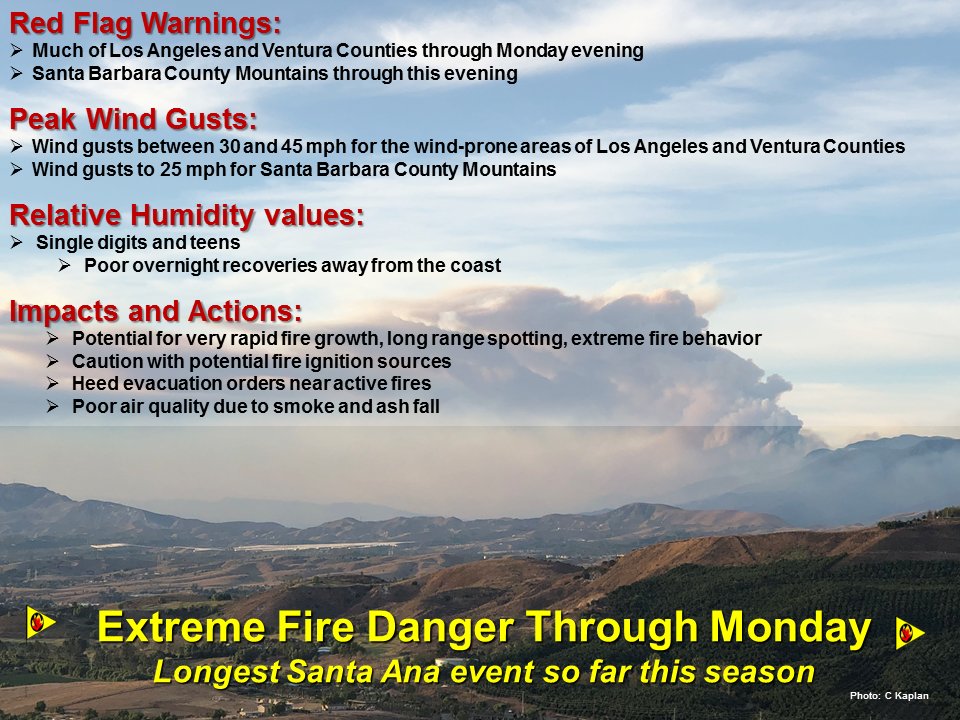 Here is a daily record maximum from smoky Southern California from today:

Preliminary high temp record for Paso Robles Airport today at 75 degrees. The previous record was 74 degrees in  1958. #SLOweather #CAwx
3:09 PM – 10 Dec 2017
I may add more information to this post if relevant information crosses my radar.
The Climate Guy