Friday February 10th… Dear Diary. The main purpose of this ongoing post will be to track United States extreme or record temperatures related to climate change. Any reports I see of ETs will be listed below the main topic of the day. I’ll refer to extreme temperatures as ETs (not extraterrestrials)😊. Here is today’s climate change related topic: (If you like these posts and my work please contribute via the PayPal widget, which has recently been added to this site. Thanks in advance for any support.)

To be honest this subject isn’t high on my list of existential treats from global warming such as the climate change refugee problem from worsening hurricanes and sea level rise or wide scale drought, but those countries wishing to host the Olympics stand to loose billions of dollars as the planet’s temperature increases, particularly those  who’s venues already have marginal conditions for all of the snow based athletic events. What I will briefly do today is summarize what I saw from Climate Central, which I know tried to put together this piece for the 2018 Winter Olympics. Here is their article: http://www.climatecentral.org/gallery/graphics/pyeongchang-climate-extremes?utm_content=buffercd033&utm_medium=social&utm_source=twitter.com&utm_campaign=buffer

Quoting from the Climate Central article: Global temperature trends since 1924, the year of the first Winter Olympics, show that Februaries have already warmed an average of 1.01°C (1.82°F) worldwide (all but four Winter Olympic Games have taken place solely in the month of February). With warming continuing around the globe, past Winter Olympics sites may no longer be viable as hosts in the future. As we previously reported, only six of the 19 past Olympic host cities will be climatologically reliable for hosting the games by the end of the century in a business as usual emissions scenario. On average, previous host cities will see 2.1°C (3.8°F) of warming by the 2050s and 4.4°C (7.9°F) of warming by the 2080s under that scenario, and 1.9°C (3.42°F) and 2.7°C (4.86°F) of warming respectively with significant emission cuts.

Back in 2010 when Vancouver hosted the winter games I remember teasing my climate change doubting colleagues that there was hardly any snow at most venues. Why, it was hardly cold enough to even make snow where it was needed. According to the Climate Central article at Sochi in 2014 the temperature got up to a balmy 68F. Pyeong Chang in South Korea has a colder climate, so the 2018 Olympics should have no problem, but some winters will become even more problematic if a location like Vancouver ever wants to host the games. Fraser MacLeod remembers Vancouver:

Fraser MacLeod‏ @FraserMacLeod5
There wasn’t enough snow for the 2010 Vancouver Winter Olympics. Snow was trucked in from elsewhere in BC to supply the venue with enough snow. Costs were high because truckers had Olympic organizers over a barrel. Also, a large carbon footprint associated with moving snow.
4:02 PM – 10 Feb 2018

Continuing from the article: Additionally, northern hemisphere snow cover extent is declining and glaciers are retreating. Not only is this bad for winter-based economies and the competitions themselves, it also makes reliable training locations difficult for athletes to find, forcing athletes to travel farther to train. In the United States, some ski seasons are forecast to be 50 percent shorter by 2050 and 80 percent shorter by 2090, and the impact of this extends beyond professional athletes. Winter sports generate $72 billion per year in the United States and support nearly 700,000 jobs. An updated report on the economics of the winter sports industry and the impacts from climate change is expected from the group Protect Our Winters in the coming weeks.

In conclusion, climate change stands to hurt winter sports of all kinds. Mitigating the worst affects of global warming may save the Winter Olympics for generation’s to come.

This is the 13th consecutive day that record highs were reached in at least one location in #NorCal. #cawx 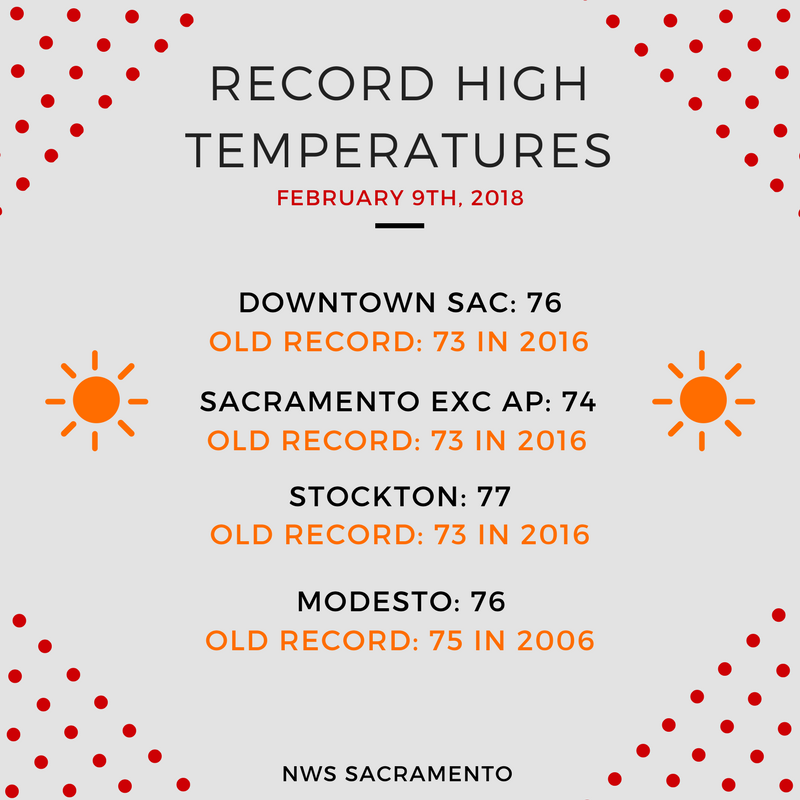