Monday February 26th… Dear Diary. The main purpose of this ongoing post will be to track United States extreme or record temperatures related to climate change. Any reports I see of ETs will be listed below the main topic of the day. I’ll refer to extreme temperatures as ETs (not extraterrestrials)😊. Here is today’s main climate change related topic:  The Media and Reporting of Arctic Warmth

In my opinion the most significant climate/weather event of this decade is taking place across the Northern Hemisphere this week, and it’s hardly being noticed much by the mainstream U.S. media on television until today, simply not being emphasized enough. I and many other climate scientists began blogging and reporting on extreme arctic warmth Sunday, so why the three day gap (if not even more time) reporting on this historic event on television? I suppose because the warmth isn’t directly killing people, but red flags are going up which could mean doom for many in the future. True, traditional media outlets like The New York Times and Washington Post are covering this arctic heat, but television not so much.

If a story bleeds it leads, which is how short sighted media has behaved reporting stories since the 19th century. The media mantra that we should see and hear is if there are is potential for a multitude of deaths and havoc the story should lead. Ah, the human race is very reactionary and doesn’t have a lot of foresight.  I did see with a wink and a nod yesterday some reporting on snow in Rome in association with the European cold wave, but none on the arctic warmth with obvious climate change ramifications. Last decade Katrina was about the biggest climate related story getting wall to wall T.V. coverage because thousands of people were affected, hurt, and did bleed.  Finally, after doing a lot of “jumping up and down” to get attention by climate scientists, the arctic warmth story is getting coverage… unfortunately at the end of more liberal televised news segments such as those on MSNBC, not on all networks.

To review this is what I see reported today on both the much related “Beast from the East” and the record arctic warmth:

Recent extreme cold weather in the Nordics and Europe is not just significant because of the anomaly intensity, also because of the persistence of the event (5-day forecast still very cold) http://cci-reanalyzer.org/wx/5day/  #WeatherWeirding @KHayhoe @climateguyw @ZLabe

The earliest global warming models showed the #Arctic would warm faster than the planet as a whole AND be an early warning that much more global warming via positive feedback loops was in store. The “canary in a coal mine” is telling us something significant: 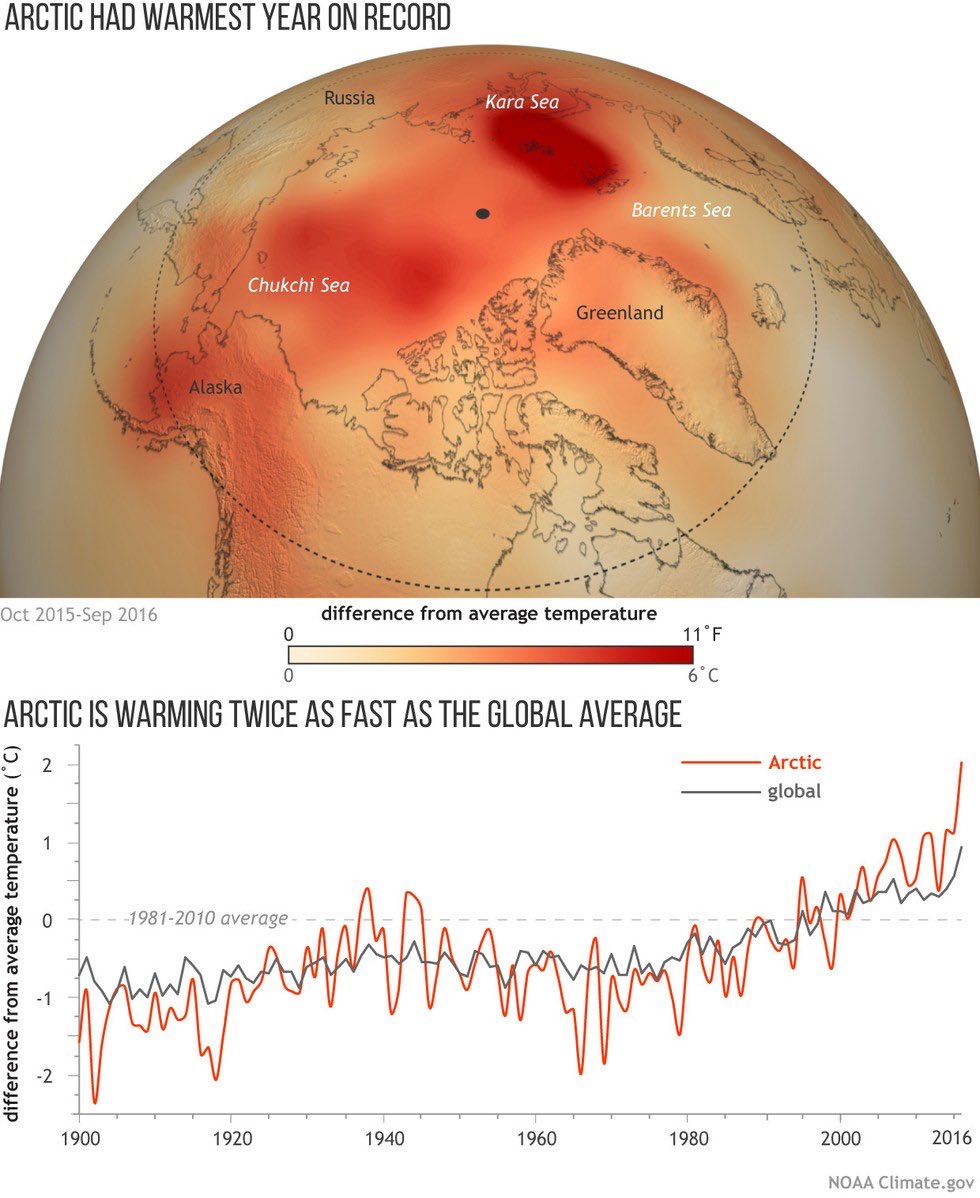 Michael E. Mann‏Verified account @MichaelEMann
Arctic warming: scientists alarmed by ‘crazy’ temperature rises” by @JonathanWatts of The @Guardian:
https://www.theguardian.com/environment/2018/feb/27/arctic-warming-scientists-alarmed-by-crazy-temperature-rises
From the Guardian article:
The cause and significance of this sharp uptick are now under scrutiny. Temperatures often fluctuate in the Arctic due to the strength or weakness of the polar vortex, the circle of winds – including the jetstream – that help to deflect warmer air masses and keep the region cool. As this natural force field fluctuates, there have been many previous temperature spikes, which make historical charts of Arctic winter weather resemble an electrocardiogram.

But the heat peaks are becoming more frequent and lasting longer – never more so than this year. “In 50 years of Arctic reconstructions, the current warming event is both the most intense and one of the longest-lived warming events ever observed during winter,” said Robert Rohde, lead scientist of Berkeley Earth, a non-profit organisation dedicated to climate science.

It’s concerning how warm the Arctic is right now, with record temps and low sea ice. As @thinkprogress says, what happens in the Arctic doesn’t stay in the Arctic.
https://thinkprogress.org/record-arctic-temperatures-85b0c287a78b/Here is a chart from the article:

Arctic sea ice has been at record low levels for much of 2018 (red line). CREDIT: Japan’s National Institute of Polar Research.
Well, you get the idea… This is very big news.  So far I see that CNN and MSNBC are the only television networks doing segments as of this afternoon:
https://www.cnn.com/2018/02/27/weather/arctic-temperatures-record-high-intl/index.html
As we move into march I’ll keep my eyes out for more media alarm bells on the Arctic warmth, which should be ringing loud and clear by this point.
I may add more information later this evening.
The Climate Guy