Sunday March 11th… Dear Diary. The main purpose of this ongoing post will be to track United States extreme or record temperatures related to climate change. Any reports I see of ETs will be listed below the main topic of the day. I’ll refer to extreme temperatures as ETs (not extraterrestrials)😊. Here is today’s main climate change related topic: (If you like these posts and my work please contribute via the PayPal widget, which has recently been added to this site. Thanks in advance for any support.)

I’ve been in the weather forecasting business since 1983, so I should have seen just about every synoptic scenario mother nature can dish out, right? Wrong. Each seasonal pattern is at least subtly different, but what we are experiencing in the Northeast going from January into March 2018 while plausible is quite improbable. We’ve already seen three bombs (or what is close to a bomb with system #3 TWC’s named Quinn). Now we are likely to see a 4th. To review the definition of a “bomb:”

The Weather Channel is likely to name this system, which will blast New England with snow and wind, Skylar. We have already seen historic storms Grayson in January, with Riley and Quinn blasting the Northeast in February and early March. Skylar would be the third nor’easter in less than two weeks. For more on these prior systems and what they probably have to do with global warming see: https://guyonclimate.com/2018/03/04/extreme-temperature-diary-march-3-2018-blown-away/

Today I would like to concentrate on just one variable or facet that all four systems have in common, the Greenland block, which is part of the negative phase of the North Atlantic Oscillation. Here is the pattern we see at 500 millibars by Tuesday morning:

We see yet another configuration of a small closed low (Skylar) off the Atlantic Seaboard circulating around a parent large closed low vortex centered over the Great Lakes. There is a big, red blob south of Greenland (in met speak a block, or that negative NAO). Blocks south of Greenland usually spell trouble for the Northeast steering potential nor’easters further West and strengthening these systems. I contend that since theses blocks are associated with relatively warm air aloft, which climate change is making stronger; thus, strengthening nor’easters with my knowledge of thermodynamics as a guide. This year we have had eye popping Arctic warmth, so I’m not too surprised to see four powerful nor’easters in the span of less than three months.

From my experience back in the decade of the 2000s, though, we had many more positive (relatively cold air aloft) NAOs than negative. Why some climate scientists were speculating that snow in the Northeast was about to go the way of the dodo bird…extinct given many mild winters shorty after the turn of the century. While a marked decrease in snow will probably be the fate of the Northeast later this century, not so the next decade or two given trends from the 2010s. To firm up any predictions, though, more studies need to be done on the dipole (see Daniel Swain’s blogs) interacting with Hudson Bay, North Atlantic, and Greenland ice.

The dipole pattern is what we are seeing more often due to that Arctic warming this decade, squeezing the polar vortex such that we are getting cold pockets, such as the one forming in the Midwest, forming into closed lows south of the blocks…also a factor spinning up nor’easters. Take a close look at the Pivotal Weather chart that I have presented today. It’s a “textbook” example of all the interrelated factors described on this post. I look forward to seeing and finding more peer reviewed studies of nor’easters interacting with NAOs.

Here is one related study: http://adsabs.harvard.edu/abs/2013AGUFM.A34E..02B  Quoting from the abstract:

“This study examines the relationship between the NAO and winter (December – February) snowfall totals in northeastern U.S. between 1961 and 2010. Two case studies of recent winter events with differing NAO phases were evaluated to provide insight on how both NAO phases can produce significant snowfall in portions of the Northeast. The analysis revealed an inverse relationship between the NAO phase and seasonal snowfall, with positive (negative) NAO index years associated with lower (higher) average snowfall and snowfall days. Significantly greater snowfall during the NAO negative phase was mainly located along the East Coast as well as the interior southern half of the study region. A composite analysis of various tropospheric variables (e.g., 500-hPa heights) showed NAO negative years produced greater snowfall due to more extreme weather conditions affecting the Northeast, such as below normal sea level pressure, a deepened mid-tropospheric trough and weaker upper-level westerlies that permitted more frequent polar outbreaks.”

So, getting away from “educated guessing” about what’s up with seeing four powerful nor’easters early this year, what will Skylar do? Here is one of the latest snow forecasts:

All models trending higher for snow-totals in New England for Tuesday’s #noreaster. Here’s a look at the latest snowfall total from our (still in experimental mode) Deep Thunder Model. Over 1ft of snow from the Cape up through Maine, including downtown #Boston 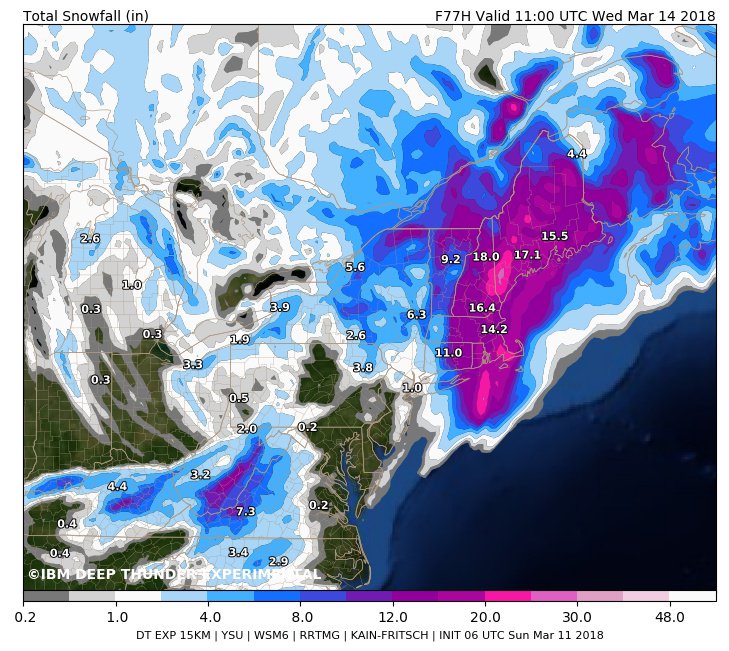