Thursday March 22nd… Dear Diary. The main purpose of this ongoing post will be to track United States extreme or record temperatures related to climate change. Any reports I see of ETs will be listed below the main topic of the day. I’ll refer to extreme or record temperatures as ETs (not extraterrestrials)😊. Here is today’s main climate change related topic:

Have many of you heard of the Scopes Monkey Trial that debated the science of evolution back in 1925? Quoting Wikipedia:

The Scopes Trial, formally known as The State of Tennessee v. John Thomas Scopes and commonly referred to as the Scopes Monkey Trial, was an American legal case in July 1925 in which a substitute high school teacher, John T. Scopes, was accused of violating Tennessee‘s Butler Act, which had made it unlawful to teach human evolution in any state-funded school.[1] The trial was deliberately staged in order to attract publicity to the small town of Dayton, Tennessee, where it was held. Scopes was unsure whether he had ever actually taught evolution, but he purposely incriminated himself so that the case could have a defendant.[2][3]

Scopes was found guilty and fined $100 ($1395 in 2017), but the verdict was overturned on a technicality. The trial served its purpose of drawing intense national publicity, as national reporters flocked to Dayton to cover the big-name lawyers who had agreed to represent each side. William Jennings Bryan, three-time presidential candidate, argued for the prosecution, while Clarence Darrow, the famed defense attorney, spoke for Scopes. The trial publicized the Fundamentalist–Modernist Controversy, which set Modernists, who said evolution was not inconsistent with religion,[4] against Fundamentalists, who said the word of God as revealed in the Bible took priority over all human knowledge. The case was thus seen as both a theological contest and a trial on whether “modern science” should be taught in schools.

Almost 100 years later sound climate science is again on trial pitted against both some elements of Fundamentalism and greed coming from “brown energy” interests. This is the article that I will be referencing from Brian Kahn today: https://earther.com/oil-companies-conveniently-think-climate-science-stoppe-1823967565

Evolution was pretty much settled science by the end of the  19th century, although it is being debated in some religious quarters to this day. I’ll always contend that at the end of another century, the 20th, fundamental climate science of the greenhouse effect was settled, so I usually roll my eyes when I get wind of another trial in which litigants try to delay any meaningful mitigation by obfuscating findings and smearing research. This week climate science is on trial in San Francisco where oil companies are being sued to help pay for preparations for sea level rise. Quoting from Brian’s article:

Good news! Oil companies are woke to the reality of climate change. There’s just one small hitch. They only care about outdated science that serves their agenda of not paying billions to fix the mess they helped create.

So it went at the climate science trial on Wednesday in a San Francisco courtroom. Well, more accurately it was a “tutorial” about the history of climate science and “the best science now available on global warming” as part of a case involving Bay Area cities suing Chevron, BP, and Exxon for billions to help them prepare for sea level rise.

The tutorial put oil companies in a bit of a pickle. They’ve known about climate change for decades and that the oil they sell is one of the root causes, all while actively deceiving the public about the dangers it poses. Admitting that could put them on the hook in California and elsewhere as climate litigation blossoms.
I’ve noticed since the end of 2014 in the last four years, which were the warmest globally on record, that brown energy companies have been put on their heels in a defensive posture. The trial in San Francisco is one more act putting energy companies on notice. As the planet continues to warm and sea levels rise this century more brown energy companies will be sued affecting their bottom lines. Also, the high cost of sooty air pollution from coal and clean up from oil spills, such as those Of the Exxon Valdez in Alaska, need to be considered even if there was no such thing as climate change:

5:41 AM – 22 Mar 2018
I’m not a brown energy company executive, but any smart ones will want to move towards green energy ASAP for solvent’s sake. It might make fiscal sense now for brown energy to fight climate science, but eventually these companies will be paying too much in fines and other penalties.
Remember what tobacco companies did to undermine medical science during the last three decades of the 20th century? Tobacco companies delayed and sacrificed change on the altar of the almighty dollar ruining many a life in the process. According to our best science we don’t have three more decades to delay putting high taxes on carbon or put a surgeons warning on fuel pumps stating that fossil fuels can be hazardous towards everyone’s health. Yes, cancerous second hand smoke has proven to be unhealthy. Second hand tail pipe pollution is proving to be just as deadly towards the climate.
Then too, brown energy companies need to be hurt in the wallet so that change will come sooner, not later. There should  be high penalties for supporting lies. Good science needs to be put on a pedestal, and not pulled down by grubby interested using bad science, which isn’t science at all. Quoting Brian:
“It makes me so sad when people use the continued existence of science as an argument against science.”
………………………………………………………………………………………………………………………………
Here is a great write-up on both winter storm Toby and the “atmospheric river” inundating portions of California from Bob Henson:
https://www.wunderground.com/cat6/fourth-noreaster-row-throws-shade-second-day-spring
Also:

John Lindsey‏ @PGE_John
An Atmospheric River moved through the Central Coast last night into this morning with some of the highest 24-hour rainfall totals since Dec. of 2010. Two weeks ago, San Luis Obispo was at about 30% of average rainfall; today its increased to 61% of normal. The 48-hour totals: 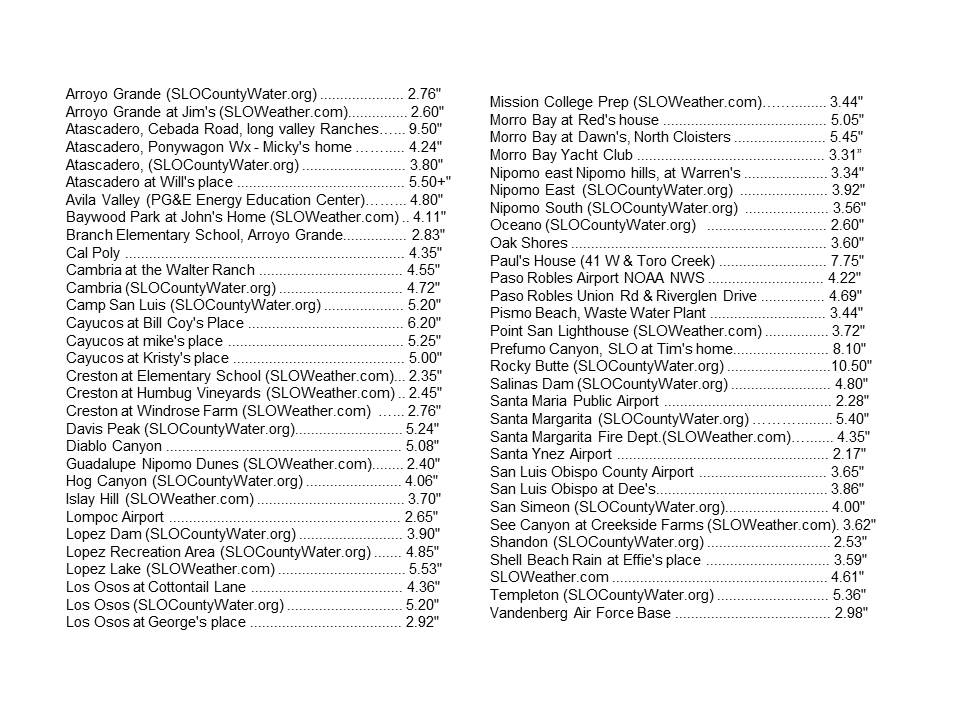 4:54 PM – 22 Mar 2018
(If you like these posts and my work please contribute via the PayPal widget, which has recently been added to this site. Thanks in advance for any support.)