Friday March 23rd… Dear Diary. The main purpose of this ongoing post will be to track United States extreme or record temperatures related to climate change. Any reports I see of ETs will be listed below the main topic of the day. I’ll refer to extreme or record temperatures as ETs (not extraterrestrials)😊. Here is today’s main climate change related topic:

March 2018 has been a very active month weather-wise. Heavy precipitation occurred the last few days in California from an episode of the “atmospheric river.” Four strong nor’easters dropped heavy precipitation  mostly in the form of snow in the Northeast. One sign of climate change is heavy precipitation since a warmer atmosphere holds and then releases more water. Bob Henson has a good summery of the latest California flood here:

Atmospheric river in California: Coastal Southern California escaped without major flash flooding from the widespread spring storm that brought heavy rain and high-altitude snow across California from Tuesday through Thursday. A few water rescues were reported, and there were widespread mudflows and some road damage, but the storm turned out to be good news for water resources in moisture-starved California. The state saw well-below-average precipitation from October through February, which was the sixth driest such period in 123 years of recordkeeping.

For more on each of these events, see weather.com’s comprehensive summaries of the Southern severe weather, Winter Storm Toby, and the California storm.

We did see some water rescues, as Bob alludes to, such as this:

Watch as a man saves the life of a stranger after his SUV is swept by rushing water near Sand Canyon Road and Road Runner Road in Santa Clarita this morning. https://t.co/rISn0B6RGW pic.twitter.com/8OlUcMAekX

Also some precipitation records in California were set: 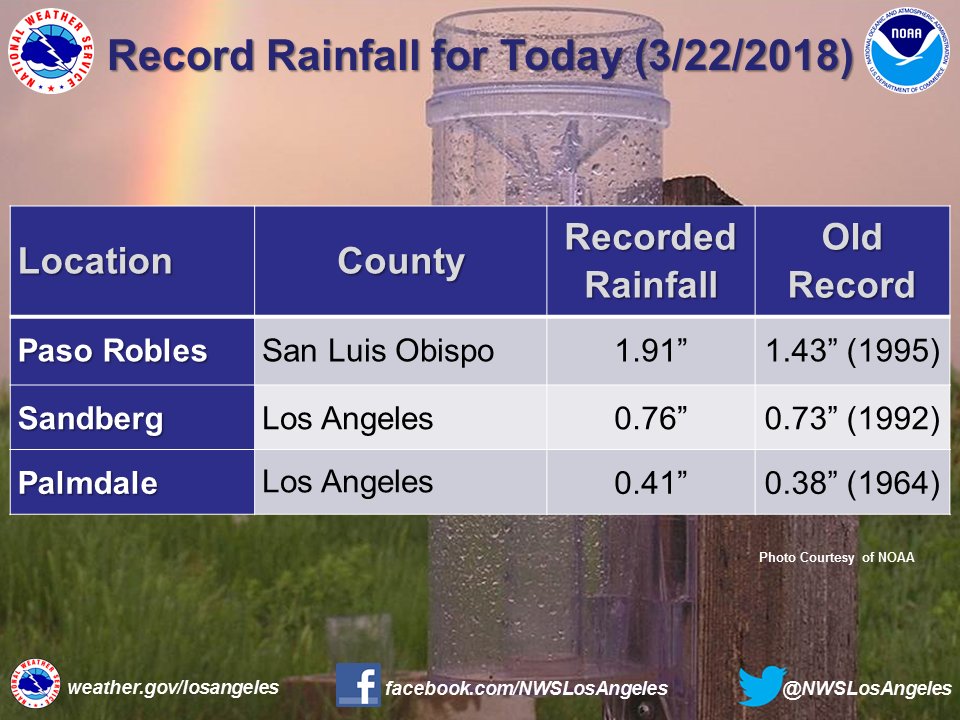 6:41 PM – 22 Mar 2018
It’s highly counterintuitive, but on this site I’ve made the argument that heavy snow can be a sign of climate change. The one link here is above average sea surface temperatures interacting with all four storms:

With 4 major storms impacting the Eastern US so far this month, here is a look at the snowfall totals for March as of Thursday the 22nd, and a comparison to normal March snowfall to date. Not surprising that most locations have seen much greater snowfall than normal for March. 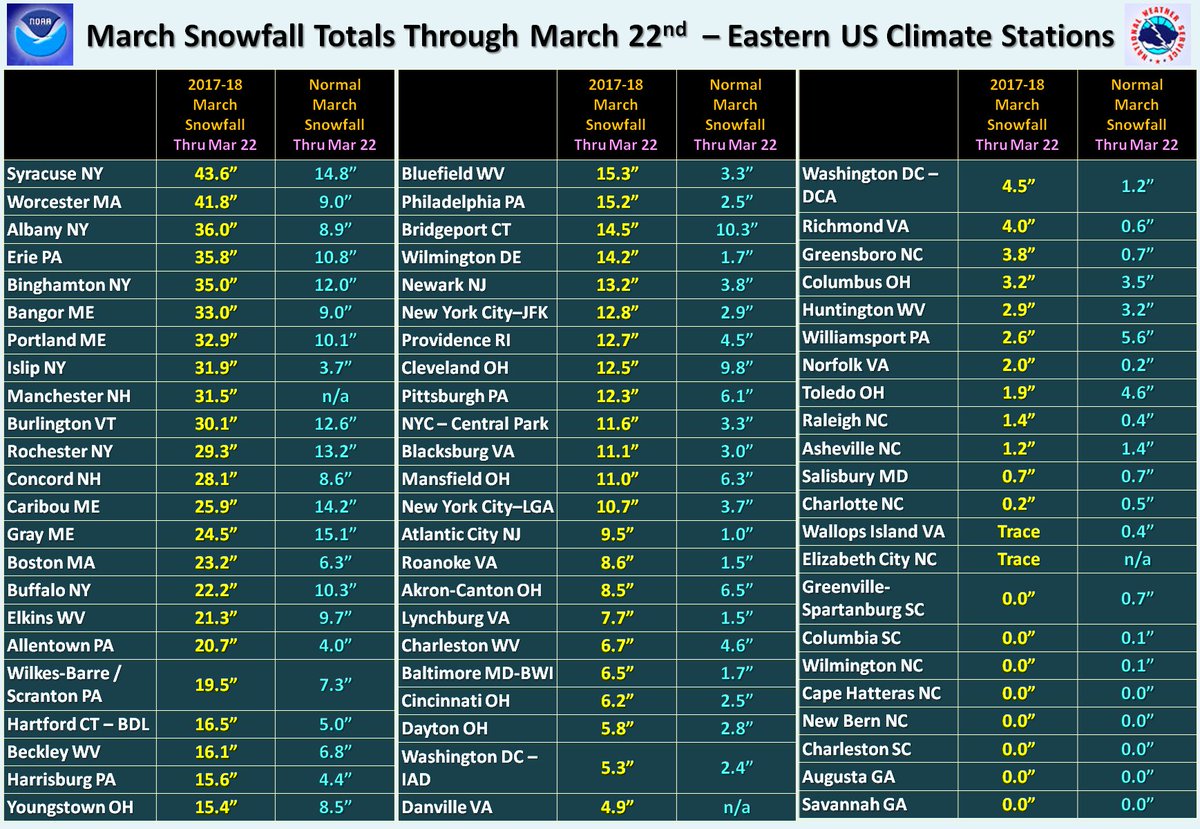 5:47 PM – 22 Mar 2018
So what’s next? Energy from the western system is already beginning to tap Gulf moisture. The resulting  slow moving front should put down copious amounts of rain where the nation us waterlogged… from east Texas unto the Ohio Valley and not where rain is needed in the southern Plains:

Taking a look at the current Drought Monitor (NDMC/USDA/NOAA) and expected precip through the rest of the month, the bulk of the heavy rainfall stays east of the Extreme/Exceptional southern Plains drought areas 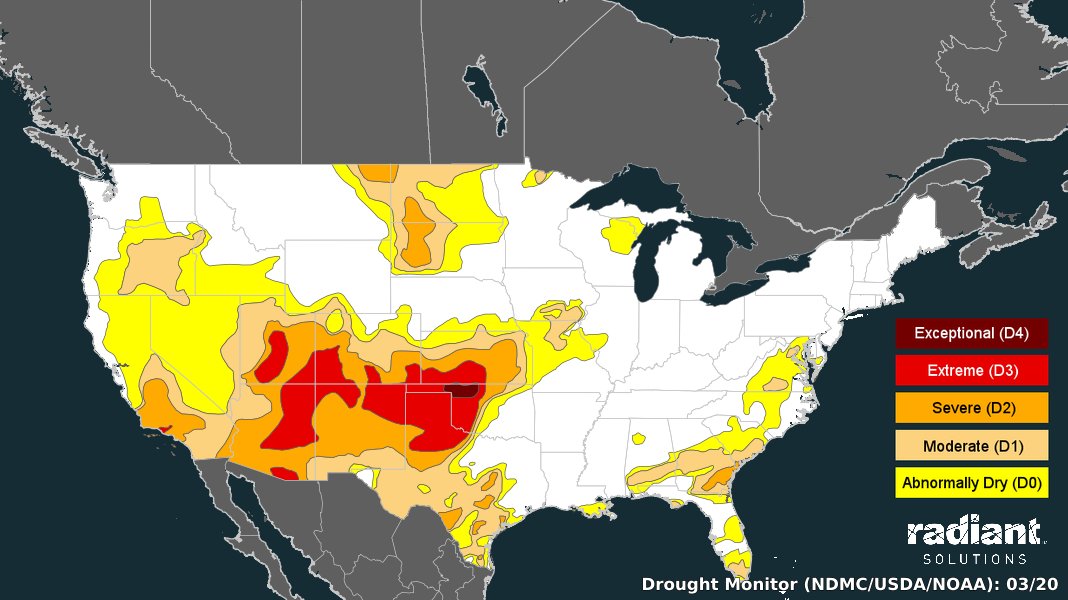 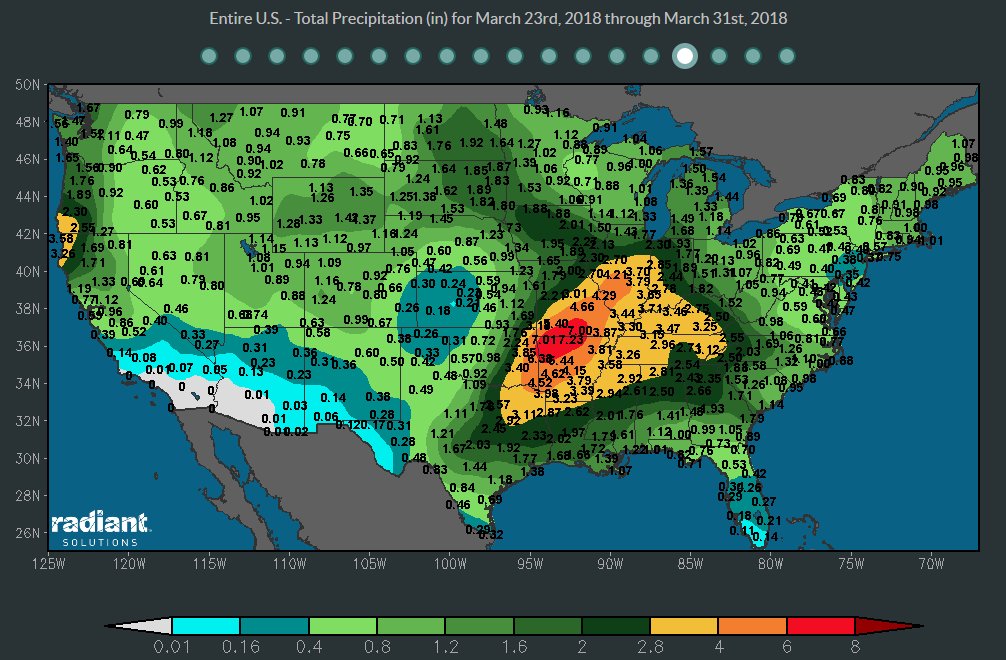 Here is the synoptic setup for next week: A slow moving 500 millibar trough will be moving into the Plains:

The key next week for localized flooding versus catastrophic flooding will be how fast the front moves from the Plains into the East.  This time of year fronts move relatively fast across the CONUS. I have a hunch or educated guess that a sign of climate change in spring is blocky patterns aloft leading to some slower moving fronts. We will definitely keep tabs on this system.

Noting the southern Plains drought that is exactly where our next set of ETs may come from:

Looks like there’s a potential to break some daily records in the N. Texas, Oklahoma, Kansas regions. 20-25 C above average ranges predicted. 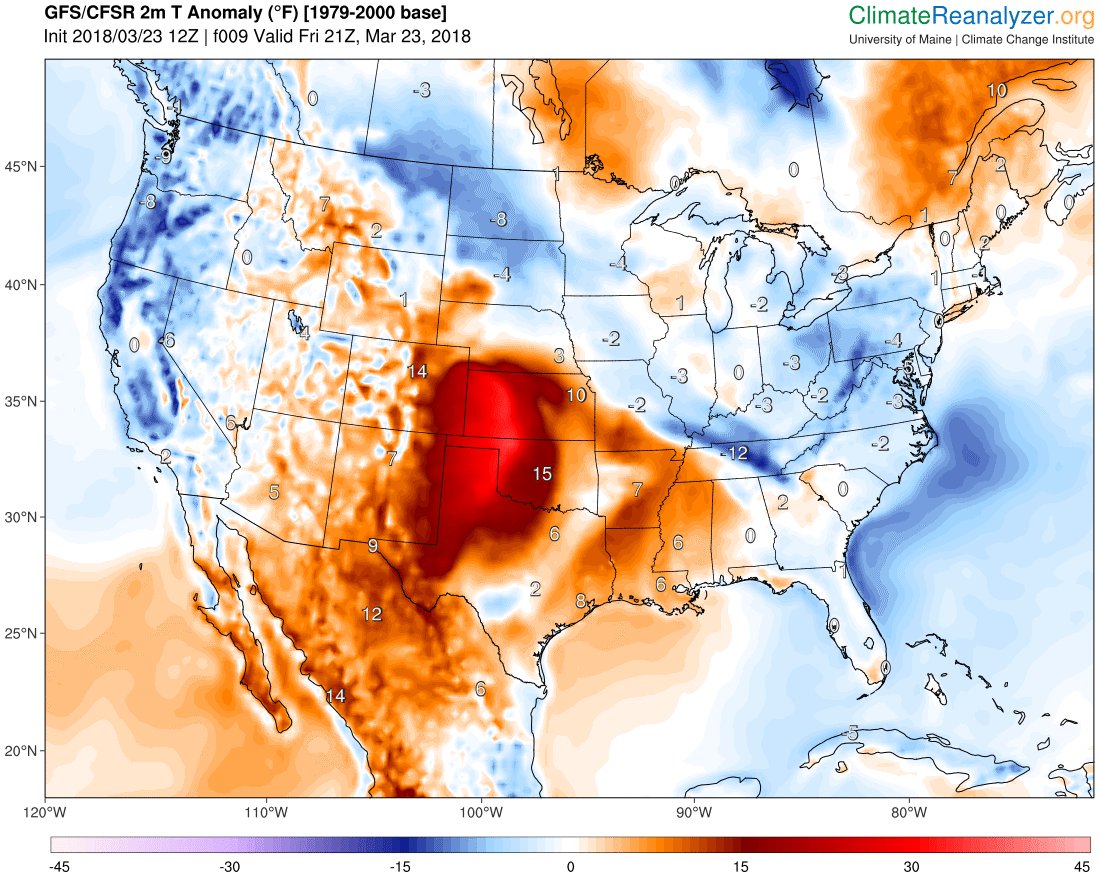 6:32 PM – 23 Mar 2018
(If you like these posts and my work please contribute via the PayPal widget, which has recently been added to this site. Thanks in advance for any support.)