Friday May 11th… Dear Diary. The main purpose of this ongoing post will be to track United States extreme or record temperatures related to climate change. Any reports I see of ETs will be listed below the main topic of the day. I’ll refer to extreme or record temperatures as ETs (not extraterrestrials)😊. Here is today’s main climate change related topic:

Just as carbon levels are starting to exceed 410 parts per million in the atmosphere globally the Trump Administration is “quietly” ending NASA’s  carbon monitoring program. The tried but true sayings of the fox guarding the henhouse, sweeping the dust underneath the carpet, and hear no evil speak no evil come to mind. Unlike some media outfits writing that the NASA program will end quietly, I think that the climate community will get pretty loud after this news broke this week. For this post I will relay some of the ramifications of ending the program. I’ll make some references to this Yale article:

The Trump administration has discontinued funding for NASA’s Carbon Monitoring System (CMS), a $10 million-a-year initiative that tracked greenhouse gas emissions across the globe, according to Science magazine. The program stitched together disparate satellite and aircraft measurements of CO2 and methane to create a cohesive look at the flow of carbon on Earth — information vital to tracking national emissions levels.

It’s obvious what is going on here. You can’t say that you have a physical problem or how bad any problem is unless you can measure it such as high blood pressure or  temperature. The fever that the planet is having is caused by excess greenhouse gases in the atmosphere we know. If one doesn’t want to admit that he is sick, he may refuse medical monitoring devices. In the case of obesity that would be weigh scales; high blood pressure, cuffs; and lung and heart problems, a stethoscope. Well, our fearless leader may not be admitting to a few of these personal problems, but I digress.

If you want to continue to sell and burn fossil fuels as of 2018 you want the public and scientific community to get as little information concerning carbon pollution and climate science as possible. Ending the monitoring  program will not deny people from getting carbon  measurements just hinder linking or knitting various measurements across the planet. Policing countries under the Paris Agreement will be harder, thus undermining efforts to limit pollution. Quoting Kelly Sims Gallagher, director of Tufts University’s Center for International Environmental and Resource Policy in Medford, Massachusetts from Science Magazine, “If you cannot measure reductions, you cannot be confident that countries are adhering to the Paris Agreement. Canceling the CMS is a grave  mistake.”

(Image Credit: NASA) NASA is planning several space-based carbon observatories, in using the OCO-3, which is scheduled to be mounted on the International Space Station later this year. The Geostationary Carbon Cycle Observatory is due for laugh early next decade. The cancelled Carbon Monitoring System would have helped to meld data from these systems together.

Today’s news item is just one more piece of bad news in the war to battle climate change. Historians wont be kind to those in charge of the U.S. during this time.

As far as the first heat wave of the season goes here are Saturday’s maxes:

Numerous daily record high maxes should be set south of the Ohio River through the Southeast.

The Weather Channel has begun to track hot car deaths, which is a great, informative move. This heat wave will only be intense enough to threaten the elderly in non-air-conditioned areas and in cars where drivers mistakenly leave passengers and pets.  Unfortunately this heat wave has claimed some lives already:

Two babies around 5 months old died yesterday after they were accidentally left in a hot car outside of Richmond, VA

This brings the number of hot car deaths this year to four.  There were 42 in 2017 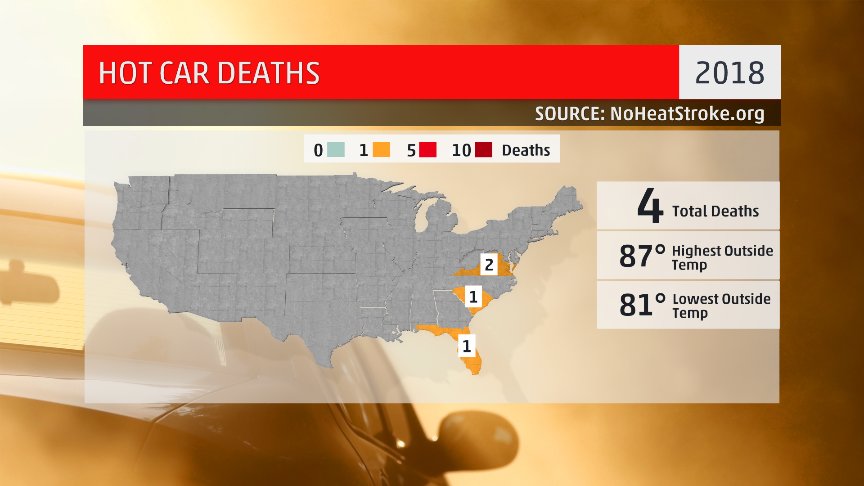 Wednesday was only the third time that Death Valley, California, has hit 116°F this early in the year (the other two times were on May 3 and 5, 1947). Record heat is possible on Thursday in Colorado, where Denver could notch its fourth-earliest 90°F reading in 146 years of recordkeeping (the earliest is April 30, 1992).

The heat will extend across the South through the weekend. Some daily records that could fall, as compiled by weather.com’s Linda Lam:

Dr. Jeff Masters co-wrote this post. Thanks go to Maximiliano Herrera for the Death Valley statistic.

It was very hot in the drought zone of west Texas today:

Now i’ve seen it all. A Severe Thunderstorm Warning for a supercell born out of a fire. Holy crap. #MallardFire #txwx 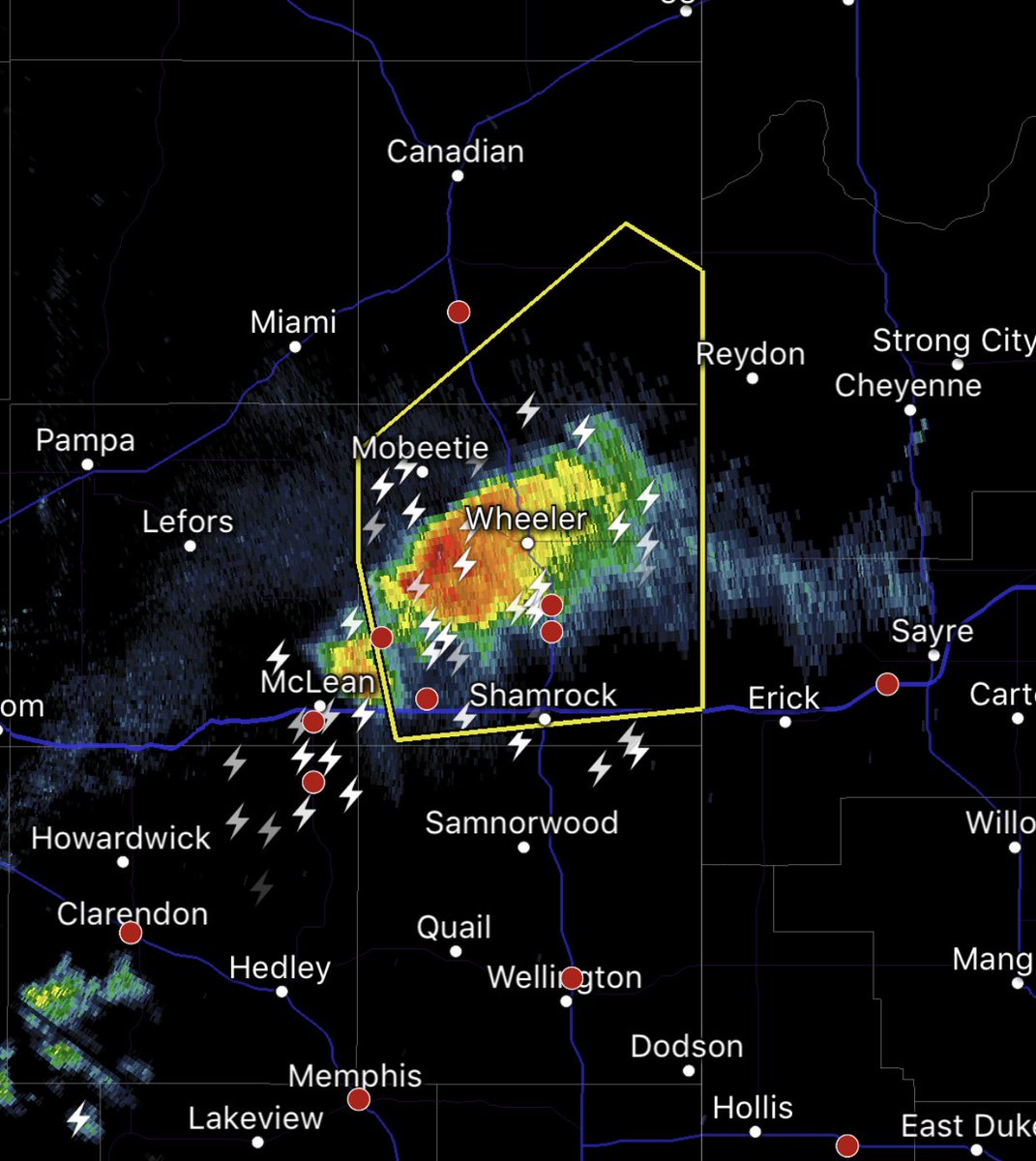 NWS Louisville‏Verified account @NWSLouisville
After a cold April, May has headed quickly in the opposite direction with the potential for record heat this weekend. #inwx #kywx #lmkwx 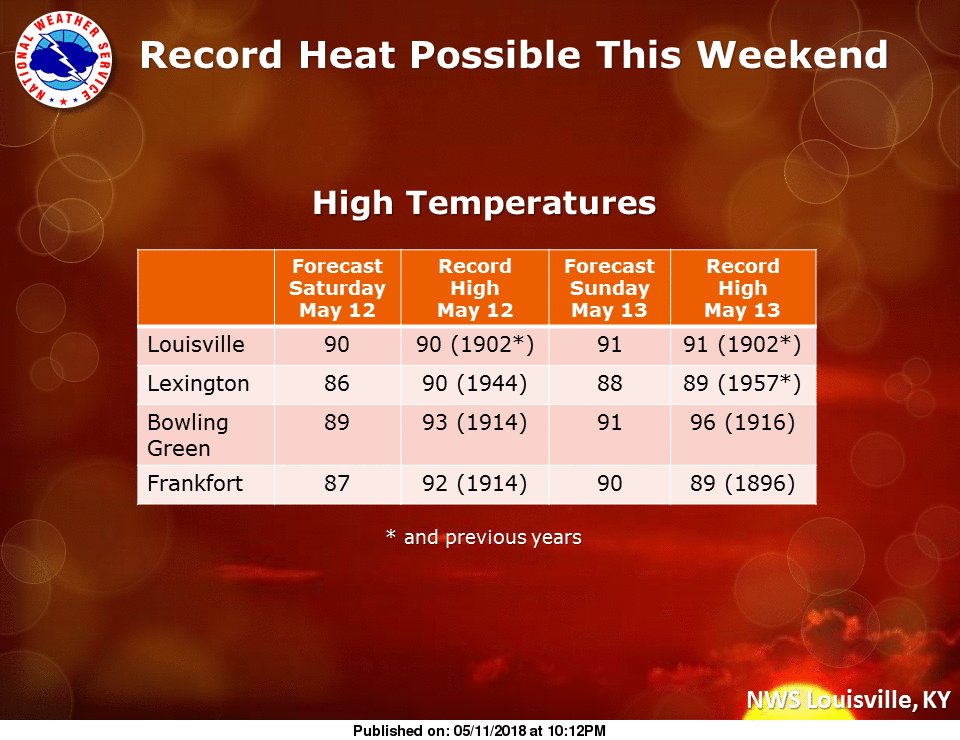