Sunday May 27th… Dear Diary. The main purpose of this ongoing post will be to track United States extreme or record temperatures related to climate change. Any reports I see of ETs will be listed below the main topic of the day. I’ll refer to extreme or record temperatures as ETs (not extraterrestrials)😊. Here is today’s main climate change related topic:

Summer has come way too early for the Plains and Midwest where people are having to be cognizant of high temperatures well above 90F. It remains to be seen whether or not the budding heat wave we currently have there will mature into a truly historic, stifling event. I don’t want to poo poo my meteorological profession, but one reason why the public doesn’t worry or pay too much attention to weather and changing climate is because the historic death toll in association with both through 2018 is just not that high, particularly in the United States. Traffic accidents, cancer, and war, for example, are far more lethal. This good fortune on the weather front is a result of a great warning system by the National Weather Service. As we have seen internationally, though, as in the case with Syria, heat can lead to drought leading to a very lethal war. I imagine that it would take maxes getting close to 120F throughout the Plains for several consecutive days to see widespread death despite air conditioning, but thankfully global warming isn’t at that level yet.

Nevertheless, heat in 2017 was second to the top dog of flooding as far as weather related deaths go for the United States. This is significant in light of Harvey, Irma, and Maria: 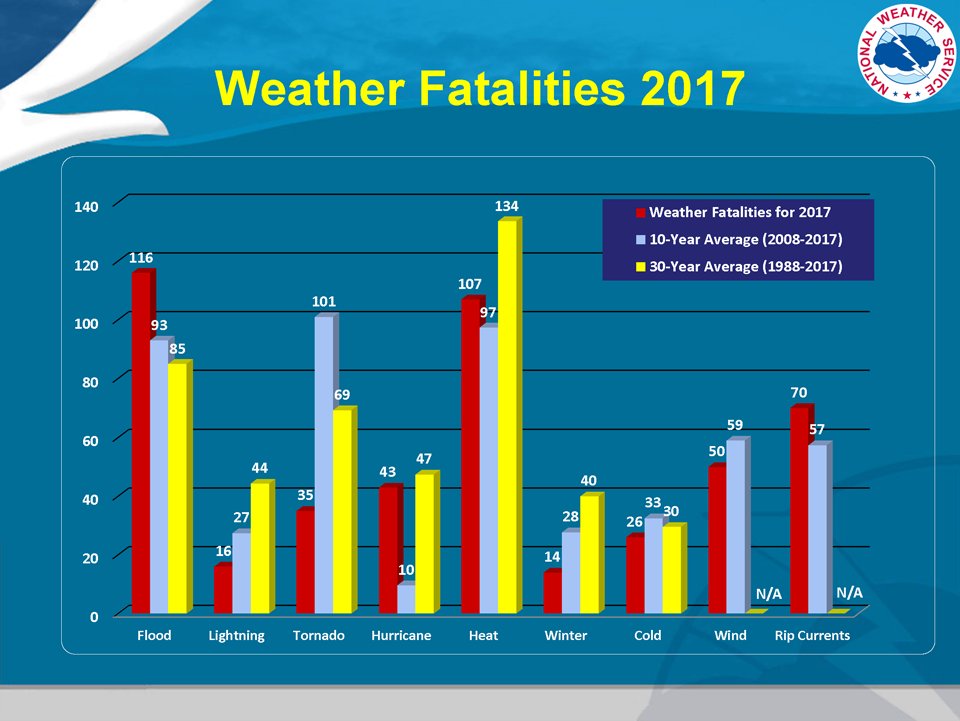 1:00 PM – 22 May 2018
There was probably a big undercount from Maria, but I digress. So, until we see another potentially devastating hurricane or synoptic flood event, we need to concentrate on heat to keep the public safe, which is the main purpose of this entire web site.

Oh my! Speaking of flooding it looks like there have been two thousand year floods in the space of only two years in portions of Maryland: https://www.commondreams.org/news/2018/05/27/second-1000-year-flood-two-years-slams-historic-maryland-city  Quoting from this article:Ellicott City was still recovering from a flash flood two years ago that killed two and forced the historic city to rebuild much of its Main Street. Residents said Sunday’s flood seemed even worse than the storm in July 2016 — which was called an extremely rare “one-in-1,000 year event,” and cost the city tens of millions of dollars in damages.

An emergency warning was issued by the National Weather Service at 4:40 p.m.

If you know anyone in Ellicott City, MD area..1st pray then tell them to stay out of flood prone areas. See the dramatic videos of flooding there now. And here is current radar. It is not by any means over. 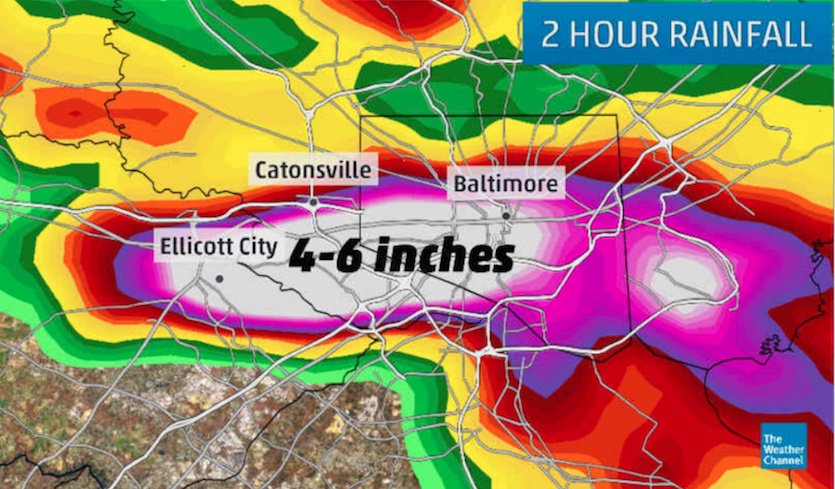 3:25 PM – 27 May 2018
What about 130F?  I doubt we will see maxes getting close to this level except at Death Valley CA, but here we could see current AC systems failing: https://www.quora.com/At-what-highest-outside-temperature-will-the-air-conditioners-work-during-summers-in-India-Is-there-any-threshold-point-after-which-it-wont-work

Shriraj Nair, HVAC
Answered May 24, 2015 · Author has 181 answers and 600.9k answer views
The temps at which a AC can operate is strongly driven by temp the compressor operating envelope , this value is determined by compressor manufacturer , in all cases most compressor can’t operate beyond 55C temp the reason being as the ambient temp increases the discharge pressure of the system keeps increasing, most system have a high pressure cut off switch, this switch cuts of the system power as the pressure increase to protect the compressor , therefore beyond 55c it’s difficult for compressor to operate.
Now back to heat episode #2 for this season. For Memorial Day here are the computer generated maxes:

I expect more extreme, record setting temperatures in portions of the Midwest and in west Texas. If the temperature got up as high as 98F at Chicago either today or tomorrow, the monthly record would be tied (old record 98 set on 5/31/1934).
The models are beginning to back off on cooling weather systems moving through the Midwest and Southeast breaking down the southern Plains heat ridge going into June. Here is the latest European model valid for a week from Tuesday :

Over my 30+ year career I have seen an interesting pattern shape up time after time after time. The heart of the heat dome over the CONUS more often than not for summer will set up where predominant drought conditions are by late spring. Drought leads to hotter temperatures since soil moisture aids in cooling the atmosphere. In 2017 the ridge built over the Southwest. Viola this year the heat dome is setting up a little further east from Arizona into the southern Plains right where we have the worst drought conditions (note the dark red colors on the drought monitor map):

I would not want to live in western Texas this summer looking at current trends.

A record hot Memorial Day is expected Monday as this #heatwave continues. Drink plenty of water and take breaks from the heat if you plan to be outside. #txwx #nmwx 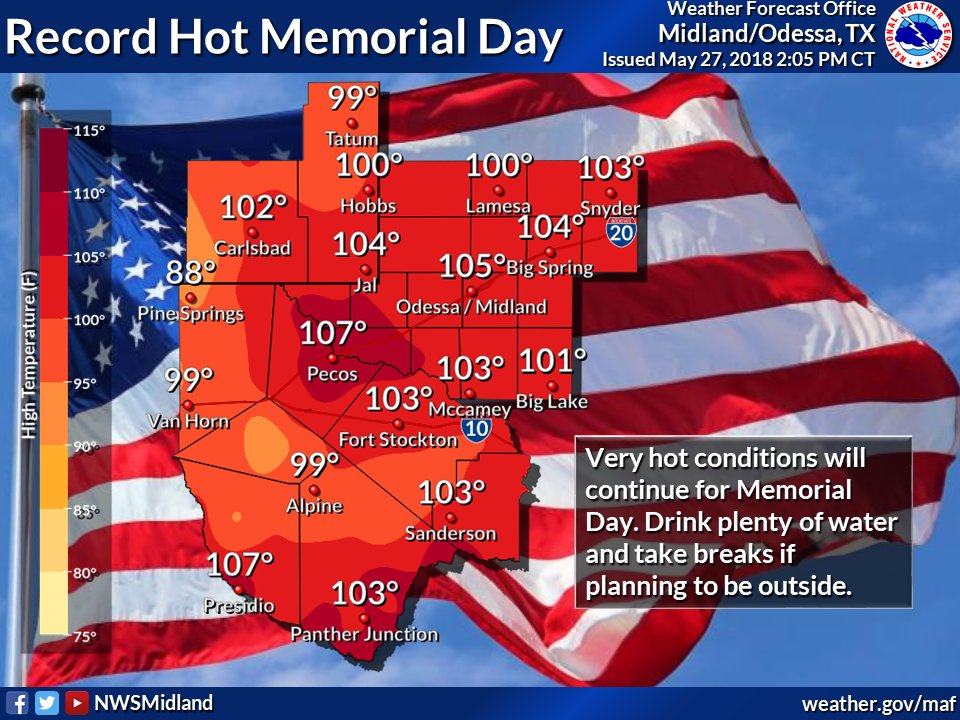 The 97 degree high now makes today hotter than any day during the past 5 summers! The last time Chicago officially reached 97 degrees was back on July 25, 2012 when it was 99!

NWS ChicagoVerified account@NWSChicago
Today’s 96 degree high in Chicago is hotter than any temperature recorded at any point in time the past 4 summers! The last time we reached 96 degrees in Chicago was 8/30/2013.
3:11 PM – 27 May 2018

We smashed some record highs in central Iowa today. 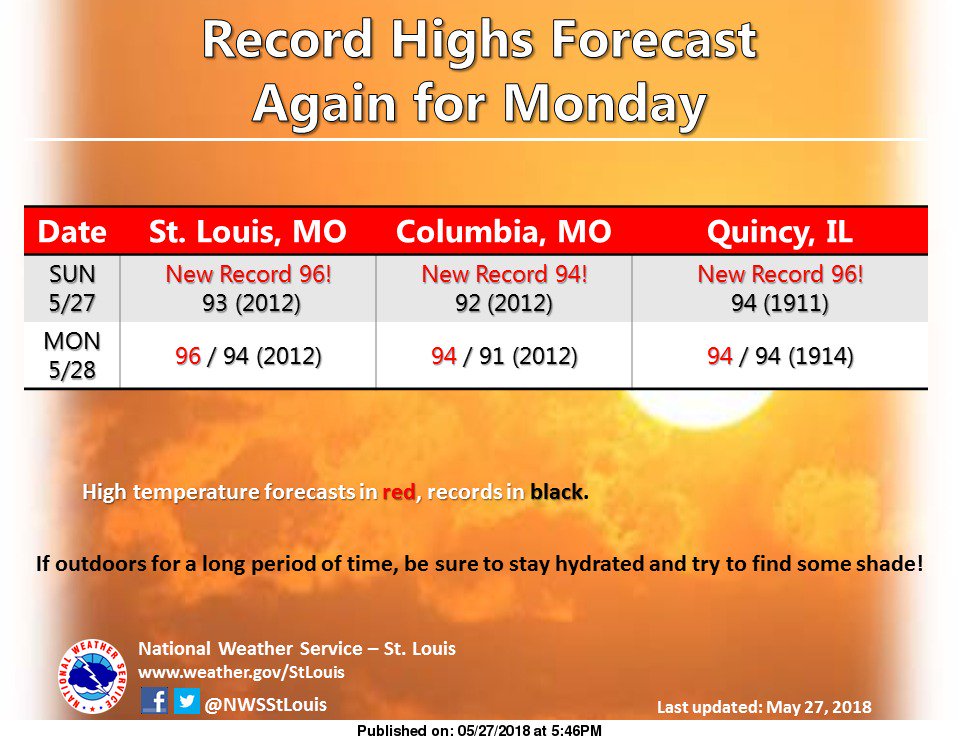 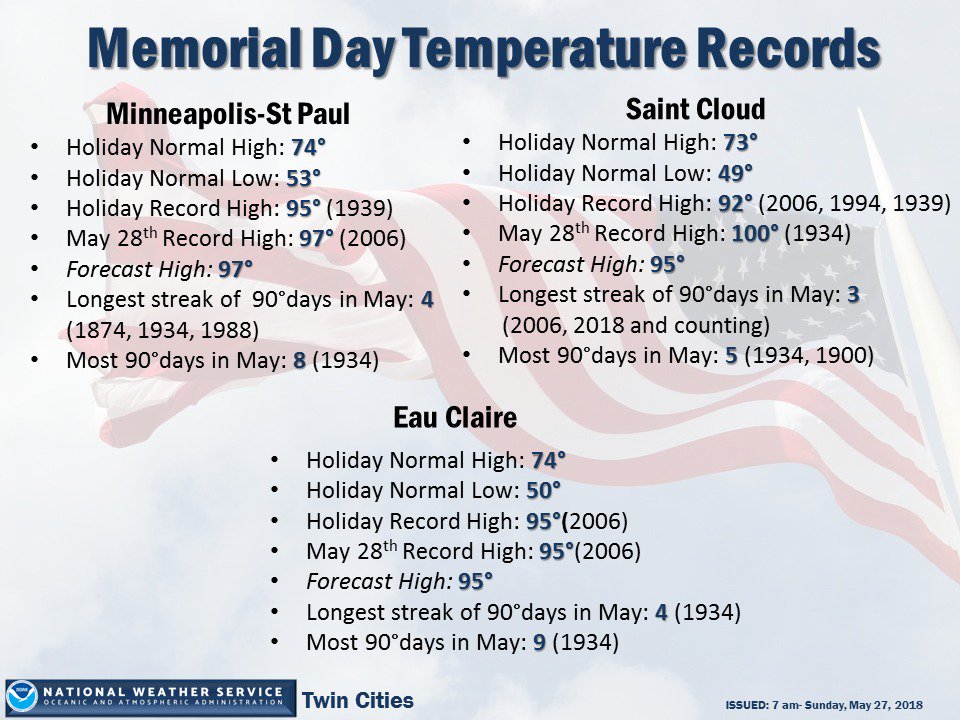