Monday May 28th… Dear Diary. The main purpose of this ongoing post will be to track United States extreme or record temperatures related to climate change. Any reports I see of ETs will be listed below the main topic of the day. I’ll refer to extreme or record temperatures as ETs (not extraterrestrials)😊. Here is today’s main climate change related topic:

There is a lot of Monday morning Memorial Day quarterbacking on various blogs, in the news and national media, and on social media concerning awful flooding at Ellicott City, Maryland. Rather than “piling on” let’s briefly state a few positive things the powers that be can do in flood prone zones can do to ease chances for other horrific disasters. By no means am I an adaption expert when it comes to infrastructure, so if you the reader has more suggestions, please communicate those to me, and I may add them to this post.

First we need to recognize that traditional flood zones are changing, and the problem is us via carbon pollution. The chances for two thousand year floods occurring over the same area within two years obviously are going up. Case in point Ellicott City. Given the state of the climate today we should throw out 20th century probability standards for flooding. Should statisticians do an in depth analysis of Ellicott City, the probability for flooding as of 2018 would have been far greater than one in one thousand or even one in one hundred considering the likelihood of 6″ of rain or more in a small area given this new, warmer climate. Dan Satterfield has done a good job surmising the problem: https://blogs.agu.org/wildwildscience/2018/05/28/maryland-city-devastated-by-2nd-1000-year-flood-in-two-years-dont-blame-mother-nature/#comment-167219

Let me start with a paper just published in the AGU Journal Geophysical Research Letters that finds atmospheric rivers of moisture are getting wetter, stronger and longer. I saw some of this research presented at the AMS Annual Meeting last January and it was a powerful talk. These atmospheric rivers show up as gray in the GOES-16 mid-level water vapor image below. Note the connection from the deep tropical Atlantic into the SE U.S. around Sub-tropical storm Alberto. I wrote a few days ago here about new research showing the connection between Hurricane Harvey’s record rains and our warmer climate. The paper details how the extra 6-7% of water vapor in the atmosphere can make storms larger and more intense, leading to a 30% increase in rainfall.

The location is to blame as well as my friend Matthew Cappucci (who is about to become Harvard Universities first atmospheric science graduate) posted about another major factor in this flood on Twitter: Ellicott City has had a history of floods going back to the days when Maryland was an English colony but we humans have made this far, far worse:

1. We warmed the climate and that 7 % extra moisture (Clausius-Clapeyron relationship see here)  in the air leads to stronger storms with a 25% or higher increase in rainfall.
2. We also greatly over-developed land in a tiny floodplain and channeled the runoff from that development into the rivers, pushing them to go far higher than in the past.
3. We’ve also have made these extreme rainfall events worse because of the greenhouse warming. See below from the National Climate Assessment. 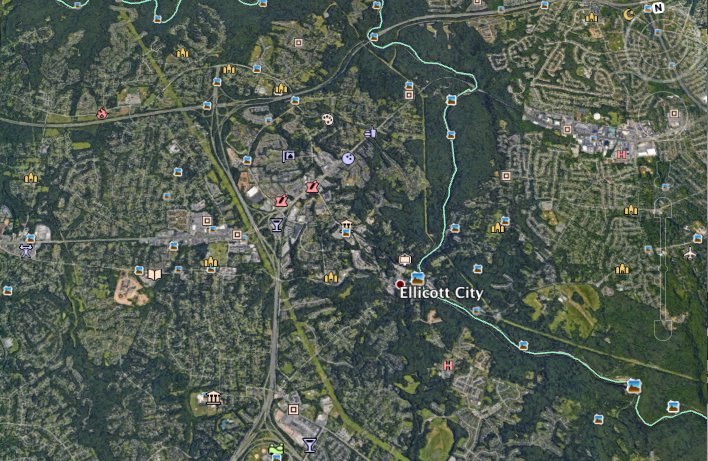 In summary, infrastructure engineers need to plan for flooding tossing out old assumptions and associated recommendations. I like the old adage if it can go wrong it will go wrong, which rebuilders need to keep in mind. That’s not to write that we need to build and rebuild like the Dutch in the Netherlands spending money making places like Ellicot City impervious to flooding via expensive dams and spillways. That would be too costly and nearly impossible. Just like along the coast we need to pullback realizing that some places may be too hard to continually habitat, picking our battles. Ants do this. If their anthill gets smashed too many times, they’ll pick up and move.

Humans aren’t like ants, though. We stubbornly don’t want to cede an inch of territory to mother nature. In the case of Ellicott City perhaps the town can be rebuilt a third time using some engineering trickery. Perhaps not. Here is a partial reason why flooding got so bad last evening:

This is partly how Ellicott City flooding gets so bad. The water takes cars, dumpsters and other  pieces of debris, smashes them into storm culverts, the culverts get blocked, and the water coming behind has no where to go and overflows in all directions. 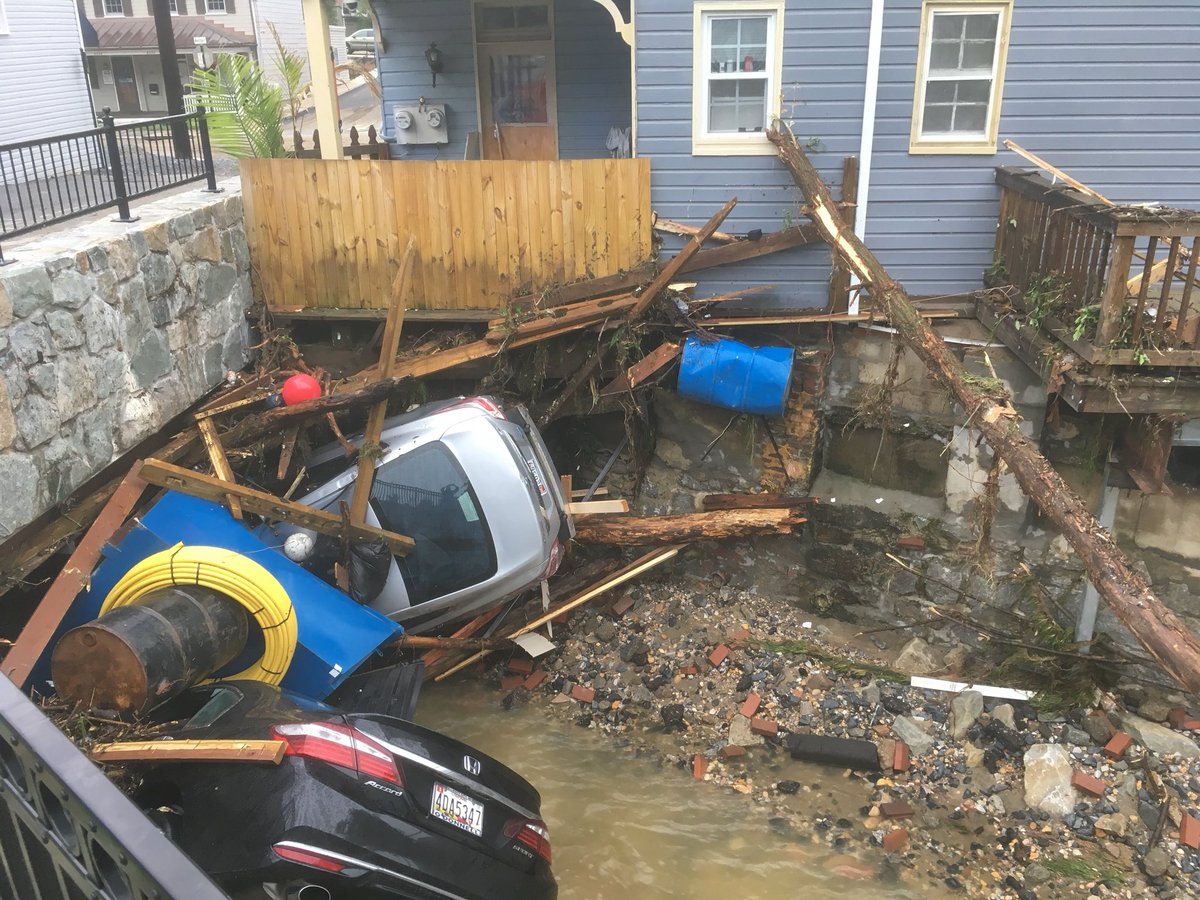 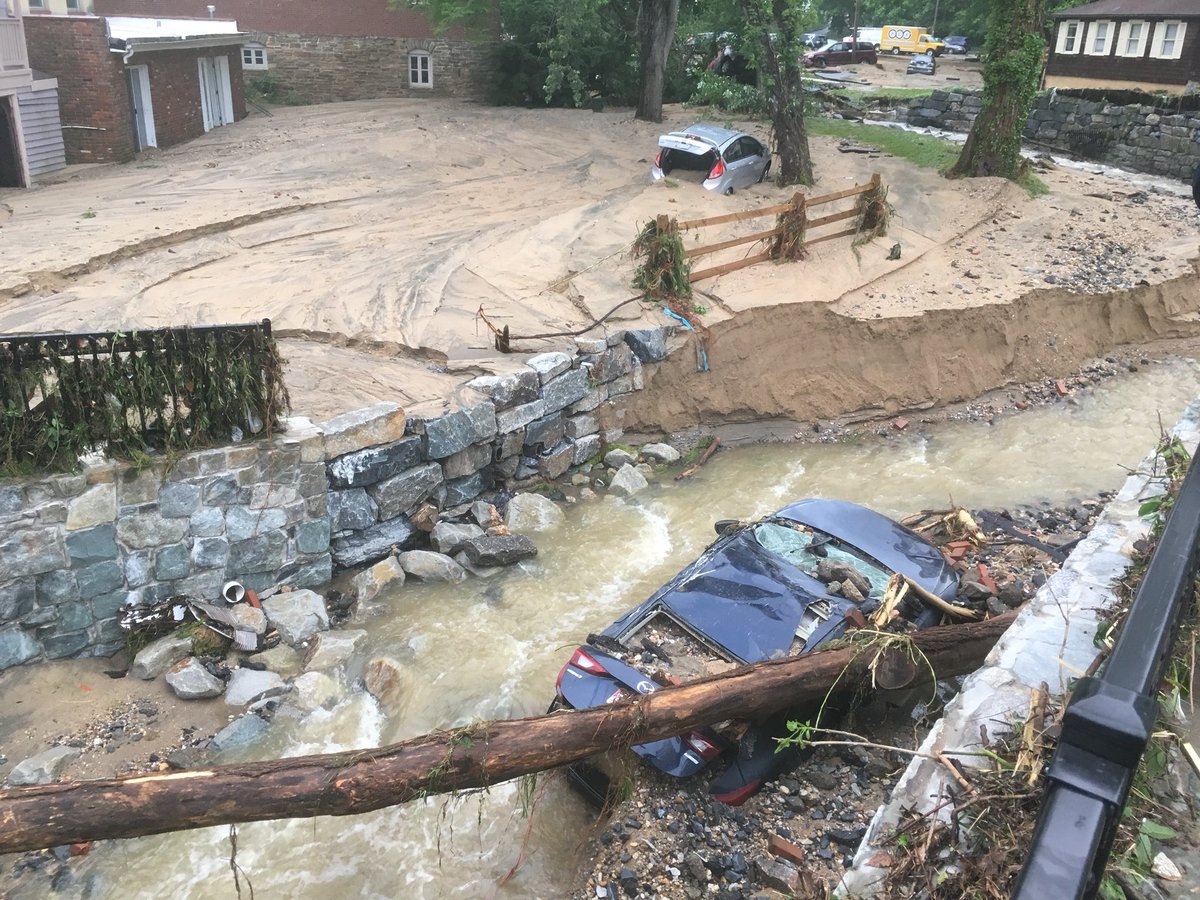 4:26 AM – 28 May 2018
Some have already suggested blocking off an area in Ellicott City not allowing vehicles to park where flooding occurred the last two years. Perhaps a channel could be built to funnel water away from the area into the Patapsco River. Certainly insurers will raise some eyebrows if planners suggest building back Ellicott City the way it stood the morning of 5/27/2018.
On a larger scale a few months after Harvey inundated Houston let’s check to see what infrastructure changes have been made in preparation for the next major flood. Here is one article I spied:  https://communityimpact.com/houston/lake-houston-humble-kingwood/city-county/2018/01/09/preparing-lake-houston-area-next-harvey/
Quoting from the article:

After thousands of homes and businesses were damaged across the region during Hurricane Harvey, local, state and regional officials are working to secure billions of dollars to pay for mitigation projects.

The officials have also stressed a sense of urgency as the next hurricane season is only a few months away.

Harris County is preparing for a bond referendum in 2018 that could exceed $1 billion, while Lake Houston area officials and legislators pursue state and national funding for projects that could also limit flooding. A bond of this size could cause property tax rates to increase, County Judge Ed Emmett said.

U.S. Rep. Kevin Brady, R-The Woodlands, said he believes it is necessary to take action before the next devastating flood. Brady’s district includes the Montgomery County portion of Kingwood.

“Our community has seen three ‘500-year floods’ in the last three years alone,” Brady said. “It’s not a question of if we face another storm like Harvey or the Tax Day flood but when.”

Local legislators and officials launched Recover Lake Houston—a campaign that lobbies for funding and awareness for projects that could reduce flooding in the Lake Houston area—in early December, said Jenna Armstrong, CEO of the Lake Houston Area Chamber of Commerce.

“Forty-four percent of businesses in the Lake Houston area—we have 7,500 businesses, so nearly half of our businesses—sustained some type of damage [during Harvey],” Armstrong said.

The initiative calls for two remediation projects along the San Jacinto River: state funding to study and dredge the San Jacinto River of the sand and debris that limits its capacity, and an enforcement of regulations on illegal sand mining operations, said state Rep. Dan Huberty, R-Houston.

Houston City Council Member Dave Martin said he believes the sand deposits in the San Jacinto River may have been directly responsible for flooding during Harvey in the Fosters Mill subdivision in Kingwood, which does not typically flood.

“If you look at the sand bars in the middle of the river that formed over the last few years, we’ve lost a tremendous amount of water capacity,” Martin said.

Here we see positive, concrete solutions being put forth to improve a large cities adaption efforts without mentioning climate change, though. Communities like Houston that are seeing thousand and five hundred year floods know that they aren’t just seeing bad weather luck. A change is in the air without quite admitting what that change could be.

Today marks the fourth day of our heat wave in the nations mid section. Tomorrow extreme heat will share some in the Midwest but readings will remain near record levels. West Texas will continue to cook:

For the 2nd day in a row, Chicago just officially tied the record high for the day. At 519 PM, O’Hare reached 95 degrees, tying the record set just 6 years ago in 2012. #DogDaysOfMay 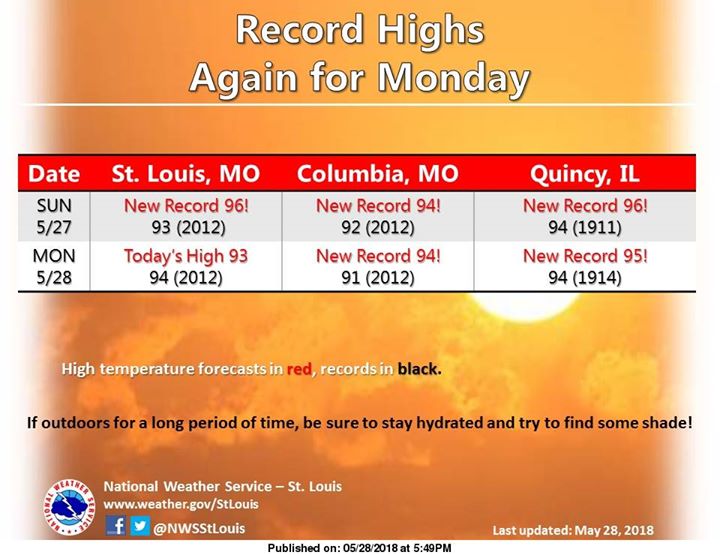 We’ve already seen 5 days of 100+ temperatures at Lubbock this May. We average about 10 days a year. We should fall a degree or two short today, but we’ll be back in the hundreds tomorrow. Remember to stay hydrated while outside and wear light clothing. #lubwx 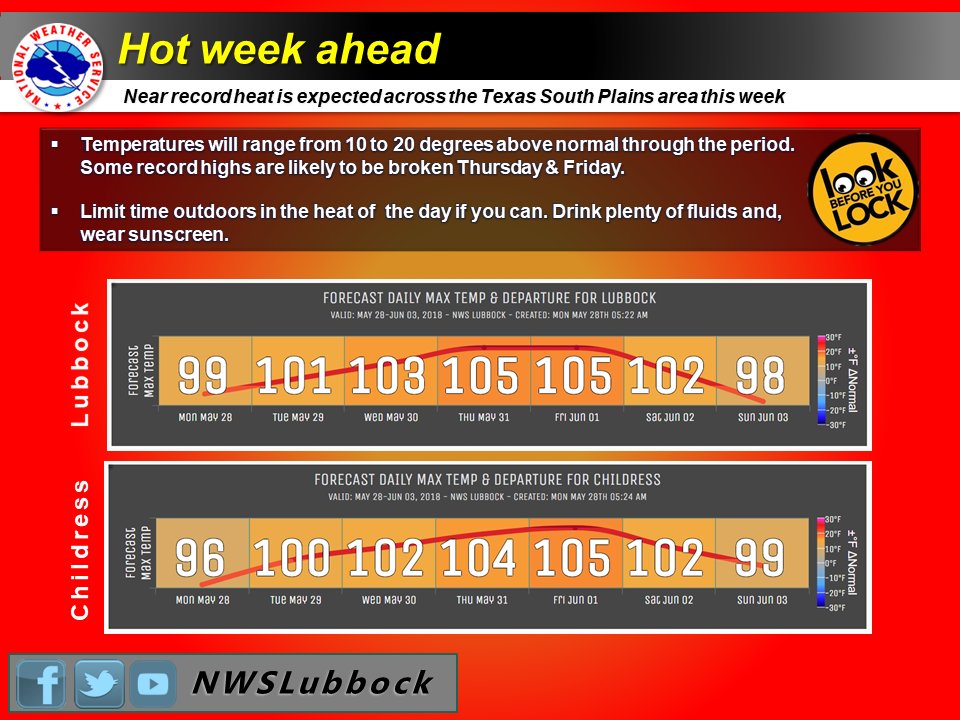 NWS Sioux Falls‏Verified account @NWSSiouxFalls
Sioux City is looking at a potential record-setting 6th consecutive day with highs of 90° or more! Like Sioux Falls and Huron, Sioux City also saw 5 straight days of 90°+ in 1934, and that is the only time it has occurred in Sioux City, until now! #heatwave 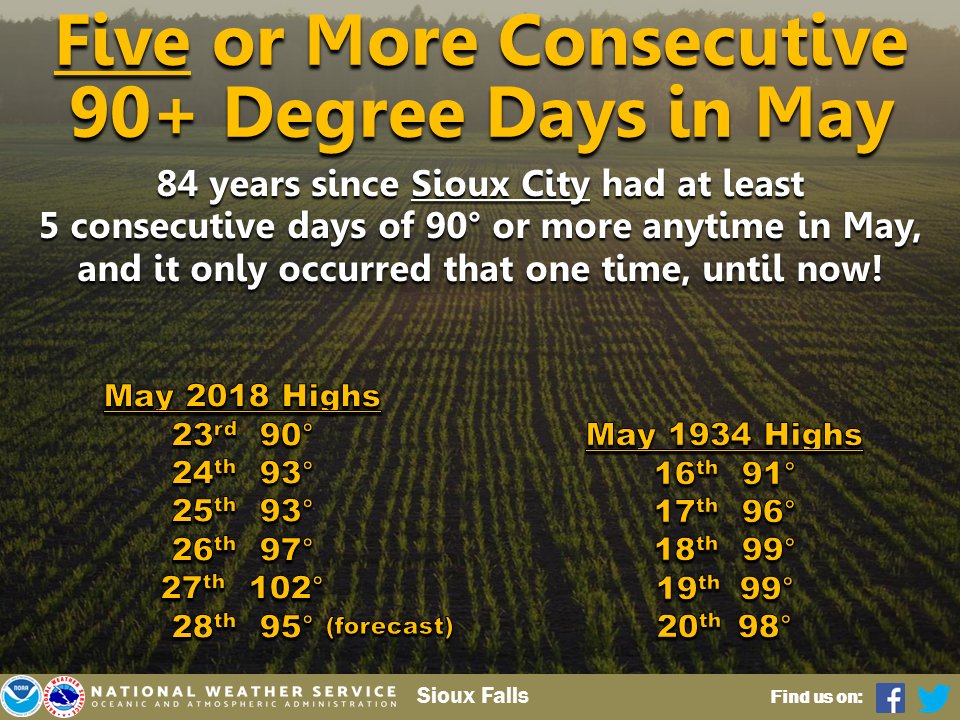