Tuesday May 29th… Dear Diary. The main purpose of this ongoing post will be to track United States extreme or record temperatures related to climate change. Any reports I see of ETs will be listed below the main topic of the day. I’ll refer to extreme or record temperatures as ETs (not extraterrestrials)😊. Here is today’s main climate change related topic:

This is another post that is emotionally hard to write since it involves the sins of my country and the darker side of humanity in general. I recall that back during WWII that the number of people reported killed in concentration camps by the Germans was horrendously low. It wasn’t until the very end of the war and the months thereafter that  true ugliness and number of atrocious murders within the camps came to light. Perhaps if news from the Holocaust had gotten into mainstream news outlets sooner outrage might have spurred troops to end Germany’s fascist regime faster. Freeing the concentration camps just a few days sooner than happened would have saved many lives. History is the true judge though, not this one writer.

Often when regimes want to continue rolling right along with any controversial agendas they hide facts. Scott Pruitt and company are taking pages from Orwell’s 1984 rewriting EPA websites to keep oil flowing and coal burning as long as possible appeasing money interests from fossil fuel companies. Now we get news today that there has been a huge undercount by the Trump administration of the number of Puerto Ricans killed mainly from the after effects from Maria from a new Harvard study. That number is now near 5000. If the powers that be can get away with reporting less climate change victims, then they can say that the problem really isn’t that bad. Right?

Back in 2005 when Katrina slammed into New Orleans the number of deaths approaching 2000 could not be hidden from the media. People mainly died from Katrina due to the direct impact from the storm via wind, storm surge and flooding. Initially Maria’s direct impacts may have taken less than 100 lives, but not enough resources were put into what I’ll term infrastructure triage to prevent subsequent deaths from disease and heat mainly due to the lack of electricity. To this day about 20% of Puerto Rico has no power. Due to the slow drip drip drip of news in subsequent months since September 2017 coming from Puerto Rico people on the U.S. mainland just don’t know how bad the situation has been and continues to be. If enough really cared a wartime-like effort would have been made to ease Puerto Rico’s pain.

To a certain extent like in WWII, deaths and suffering from survivors via Maria were swept underneath the old proverbial carpet. This is a terrible atrocity stemming from a lack of urgency and political will to fix basic problems. In all three cases, the Holocaust, Katrina, and Maria, it was those who were the poorest and most maligned racially that suffered the most. Obviously there are big differences between the Holocaust and climate change ramped up hurricanes. Millions died from the Holocaust and only thousands died from the hurricanes. Then too, the Holocaust occurred because of religious and political problems that festered within society. Poverty and an associated certain degree of pre-existing racism helped to increase deaths from the hurricanes. My tie between these tragedies are political powers that don’t face the truth of ugliness that their policies foster.

Sadly I fear new Harvard based study estimating 5000 deaths from Hurricane Maria in Puerto Rico still could be low…long term tragedy and health issues are always underestimated. Many of us were stunned people/leaders were not grasping magnitude of that tragedy then and now.
12:57 PM – 29 May 2018

Numerous articles have indicated that climate change hurts poorest people the most whether they be Bangladeshis fighting sea level rise or Puerto Ricans fighting stronger hurricanes. What will make the situation better in the long run is recognizing hard truths to stem carbon pollution, including those of adaption due to income and wealth inequality. One real question I have coming from both recent and past history is just how much value society puts on a single life? When an administration doesn’t report a good estimation of the number of victims from a strongly related climate change event there is less outrage and less political will for change…just saying.

I’m linking two well written articles on the Puerto Rican death undercount from Maria here, which all should read:

Essential quoted findings from the study:

RESULTS From the survey data, we estimated a mortality rate of 14.3 deaths (95% confidence interval [CI], 9.8 to 18.9) per 1000 persons from September 20 through December 31, 2017. This rate yielded a total of 4645 excess deaths during this period (95% CI, 793 to 8498), equivalent to a 62% increase in the mortality rate as compared with the same period in 2016. However, this number is likely to be an underestimate because of survivor bias. The mortality rate remained high through the end of December 2017, and one third of the deaths were attributed to delayed or interrupted health care. Hurricane-related migration was substantial.

CONCLUSIONS This household-based survey suggests that the number of excess deaths related to Hurricane Maria in Puerto Rico is more than 70 times the official estimate. (Funded by the Harvard T.H. Chan School of Public Health and others.)

(Image of Cat. 5 Maria on its way to Puerto Rica.)

In other news today:

According to PRISM, the avg. monthly temp for the CONUS for May is 64.6F, thru 5/28. #NCEI shows the all-time CONUS record being 64.71F in May 1934. With blast furnace temps across much of CONUS next 2 days, the Dust Bowl era record should fall. 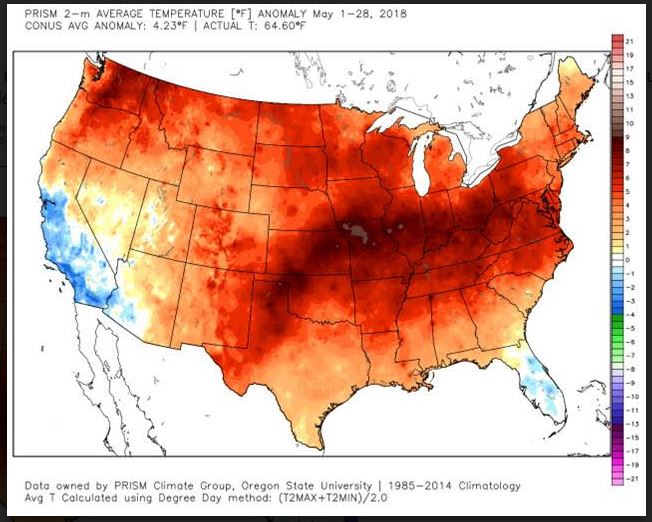 Happy Tuesday! Get ready for the HEAT! Check out today’s high temperatures and what’s coming up later this week. #dfwwx #ctxwx 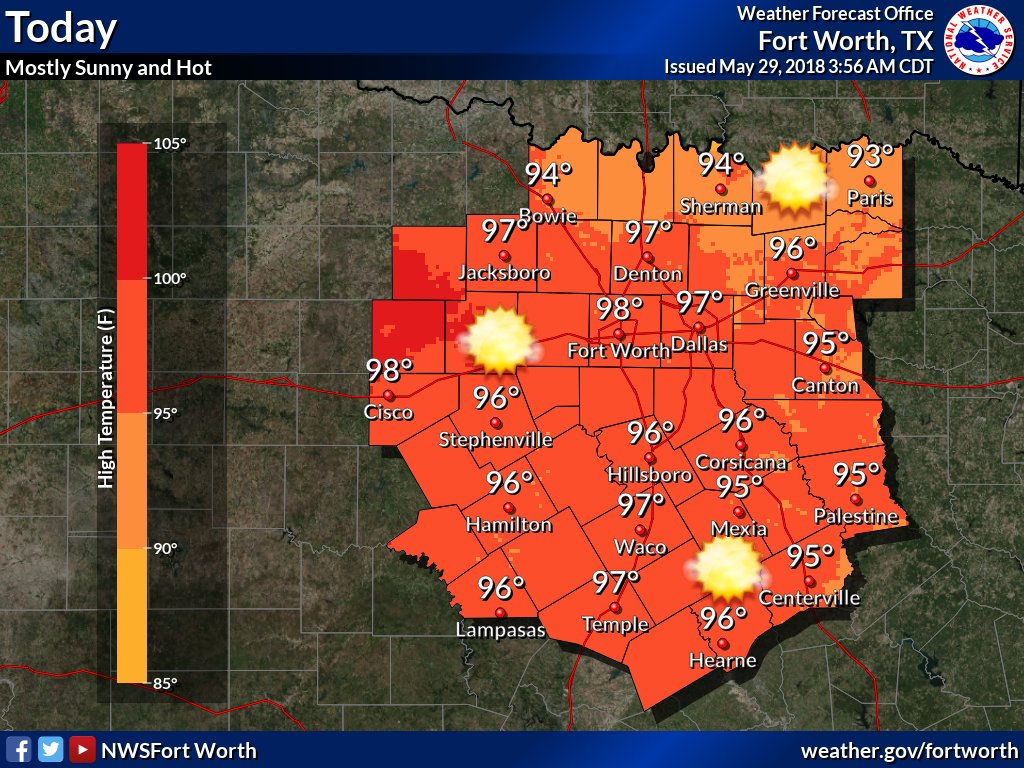 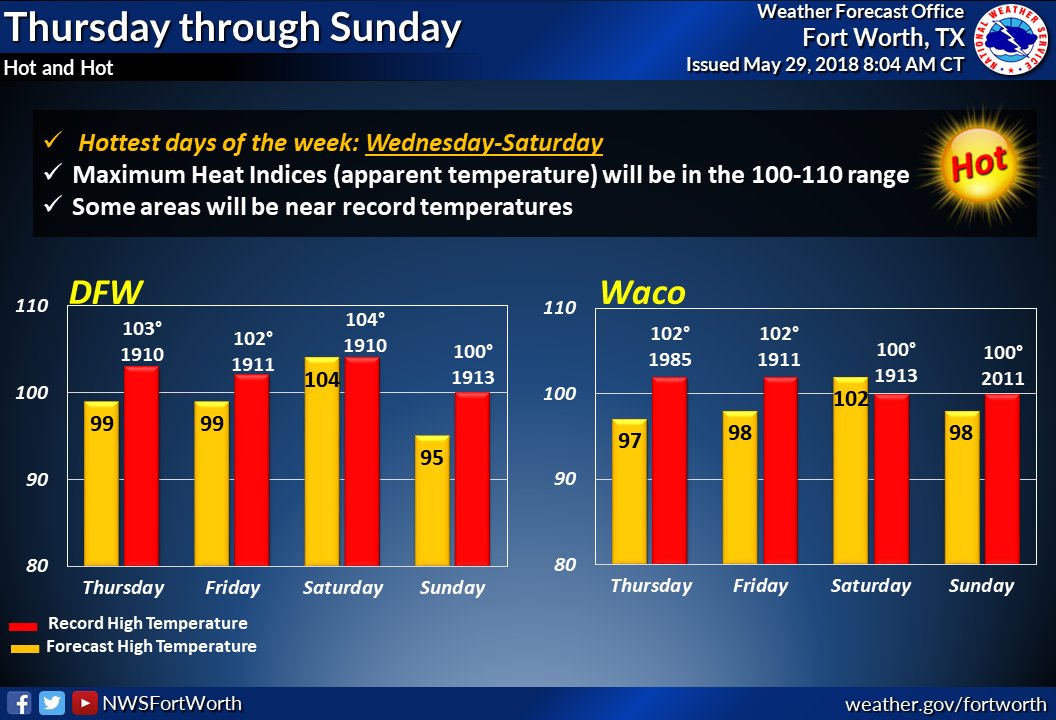 I’ll be  adding ET reports in this space later today.