Thursday July 19th… Dear Diary. The main purpose of this ongoing post will be to track United States extreme or record temperatures related to climate change. Any reports I see of ETs will be listed below the main topic of the day. I’ll refer to extreme or record temperatures as ETs (not extraterrestrials)😊. Here is today’s main climate change post related hot topic:

If there was ever a time on this site to press a red alert button if it had one it would be now. Climatologically in the Northern Hemisphere at most locations the hottest time of the year is in July into the first week of August, so even during cooler global periods prior to 1980 people experienced hot conditions during thus period of the calendar year. Adding increasing carbon pollution into the climate mix is like pouring kerosene onto a campfire making the thing explode with record heat, which indeed has happened this month. Bob Henson has written a masterful piece summarizing worldwide, eye opening record reports from the last week here:

“Temperatures soared into the nineties Fahrenheit north of the Arctic Circle on Tuesday and Wednesday, as 2018’s parade of exceptional heat continued marching across the Northern Hemisphere. This week has been northern Scandinavia’s turn under the sizzling klieg lights, including Lapland (Sápmi), the region of northern Scandinavia famed for its reindeer and often associated with Christmas. In contrast to that wintry reputation, Sweden is now grappling with an onslaught of wildfires unprecedented in modern times, as reported by weather.com.”

“The insanely warm minimum temperatures are being made possible by ridiculously warm ocean temperatures in the Baltic Sea, which were more than 8°C (14°F) above average on July 18, in the northern Gulf of Bothnia between Finland and Sweden.”

“Extreme heat has gripped parts of East Asia, including Japan and Korea, since last weekend, with several more days of intense heat on tap. The heat wave is being blamed for at least 14 heat-related deaths and thousands of heat-stroke hospitalizations.”

“Dozens of nations and states around the globe have recorded monthly or all-time record high temperatures in 2018 thus far. Each location and record is detailed in the annotated version of this graphic. Image credit: Jérôme Reynaud, Géoclimat.”

I haven’t reposted most of Bob’s numerous international record statistics, which you can read in the post. Segueing into what I intend this site to do, reporting national “ETs,” here is Bob’s U.S. data:

“Parts of Colorado have seen an unprecented number of days hitting at least 90°F for the year to date. Up through Monday, July 16, Denver reported 33 days in the 90s, which beats the old year-to-date record of 31 such days, set in 2012. Denver’s weather records go all the way back to 1872. In Pueblo, where records go back to 1888, a total of 49 days have hit the 90°F mark so far, compared to the previous year-to-date record of 42, set in 1974. We have a long way to go before Pueblo could reach the full-year record total of 90 days hitting at least 90°F, which was set in 2000. However, the city is predicted to reach 90°F every day for at least the next week, and some of Pueblo’s hottest weather can occur in August, after the peak of the midsummer monsoon.”

“Even the state of Texas—where summer temperatures often climb above 100°F—is feeling the heat. Readings in the Dallas-Fort Worth area hit 104°F on Tuesday and 106°F on Wednesday. The DFW metroplex could reach or exceed 105°F each day into early next week, along with low temperatures possibly failing to dip below 80°F. The longest streak of highs on record of at least 105°F in Dallas-Fort Worth occurred during the infamous heat wave of 1980. That year produced 11 consecutive days of 105°F heat—from July 8 to 18—and an incredible 28 days across the summer as a whole. The forecast calls for the heat wave to peak on Friday, with a high temperature of 109°F. There has been only one July day since 1980 to record a temperature that warm in the city—a 110°F reading on July 12, 1998.”

Since Waco did exceed record limits let’s arbitrarily declare that Wednesday was the first day of yet another historic heatwave this season to plague the United States. Today I expect numerous reports of records across the Lone Star State:

NWS Amarillo‏Verified account @NWSAmarillo
Temperatures will soar into the triple digits this afternoon as high pressure strengthens aloft. This #heatwave is expected to persist through the weekend. Be sure to take all precautions to avoid heat illness today. #phwx #txwx #okwx 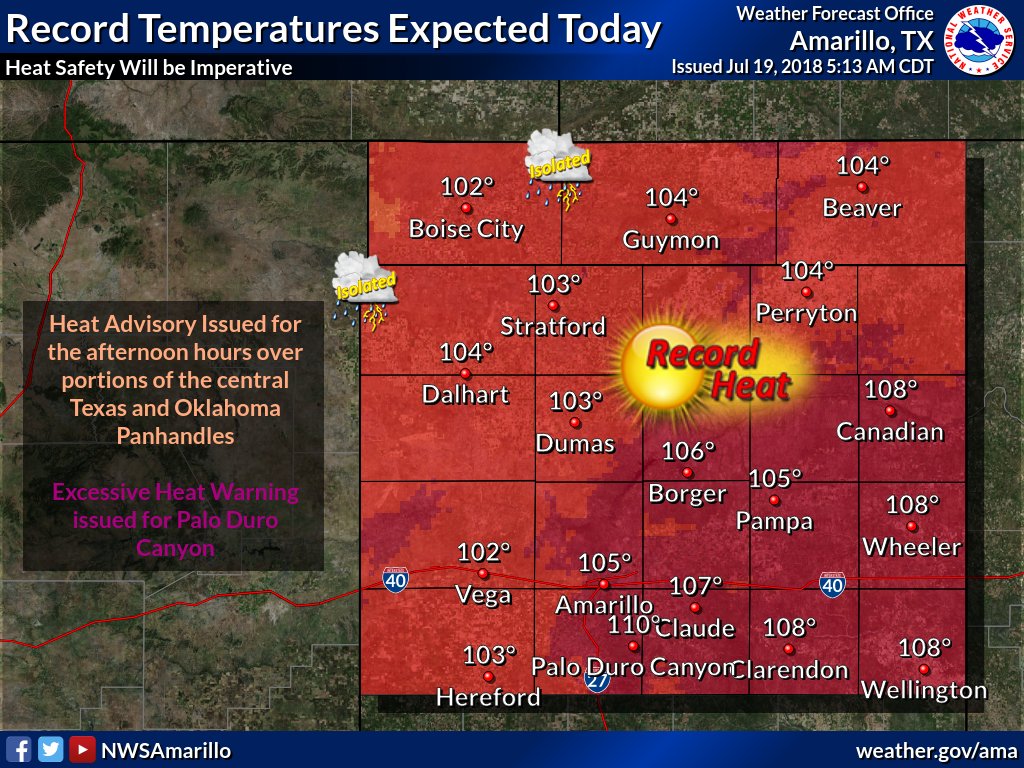 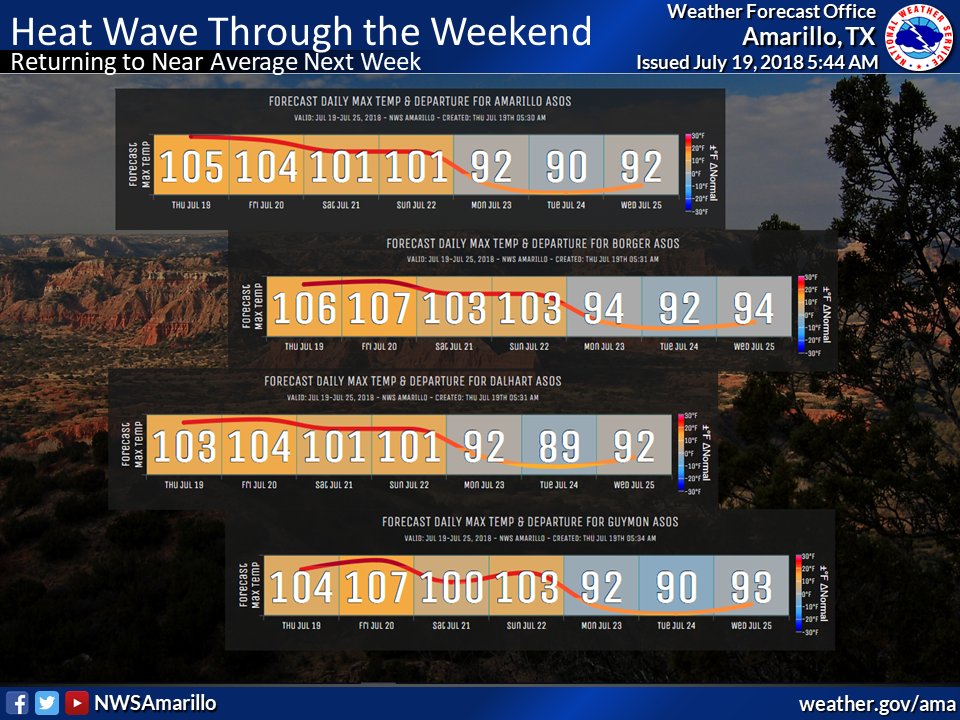 Record heat is expected through  the weekend, with max heat index values in the 102-112 range. With an Excessive Heat Warning & Heat Advisory in effect through Sunday, make sure you’re extra cautious with family & pets! #dfwwx #ctxwx #txwx #texomawx #CheckForBaby #CheckForPets 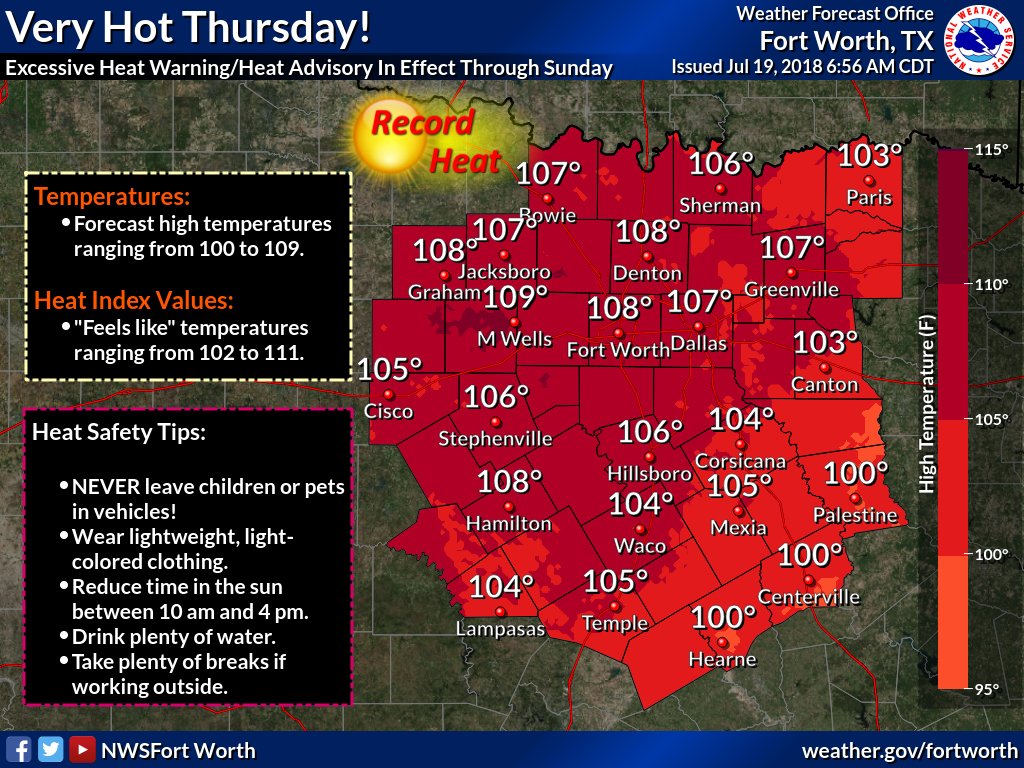 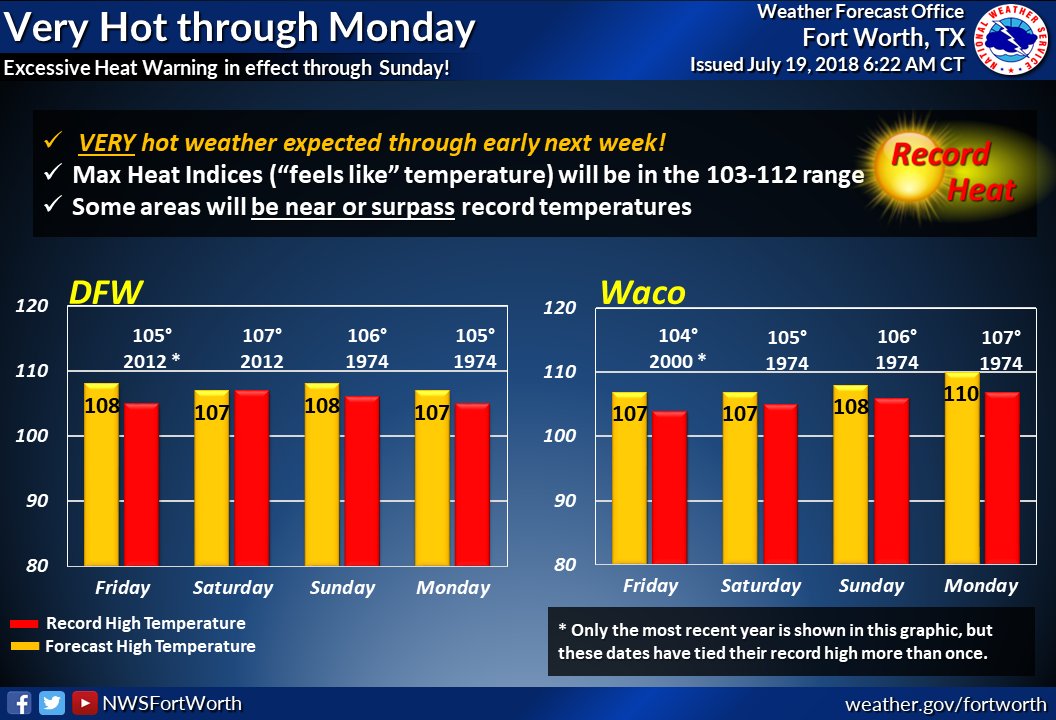 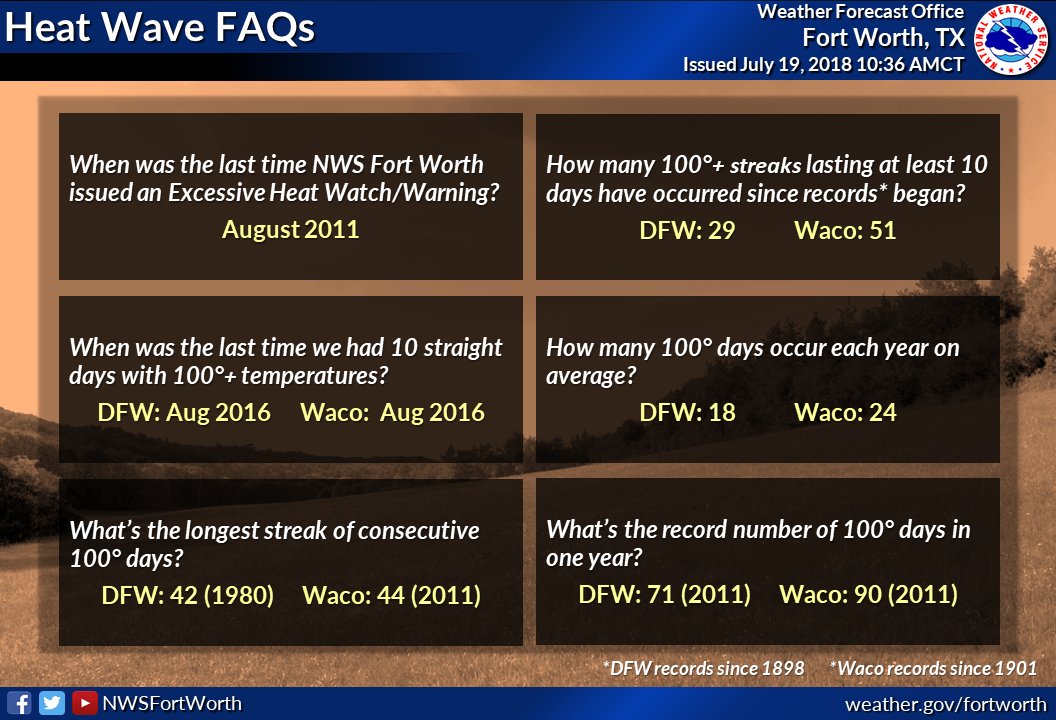 8:49 AM – 19 Jul 2018
Next week record heat will abate in Texas as our heat dome moves west allowing a cold front to move into the Lone Star State. This historic heat wave will then affect California where excess heat watches have been posted:

Another #SoCal #HeatWave is on the way and looks to be prolonged as a strong ridge aloft moves overhead next week. #cawx 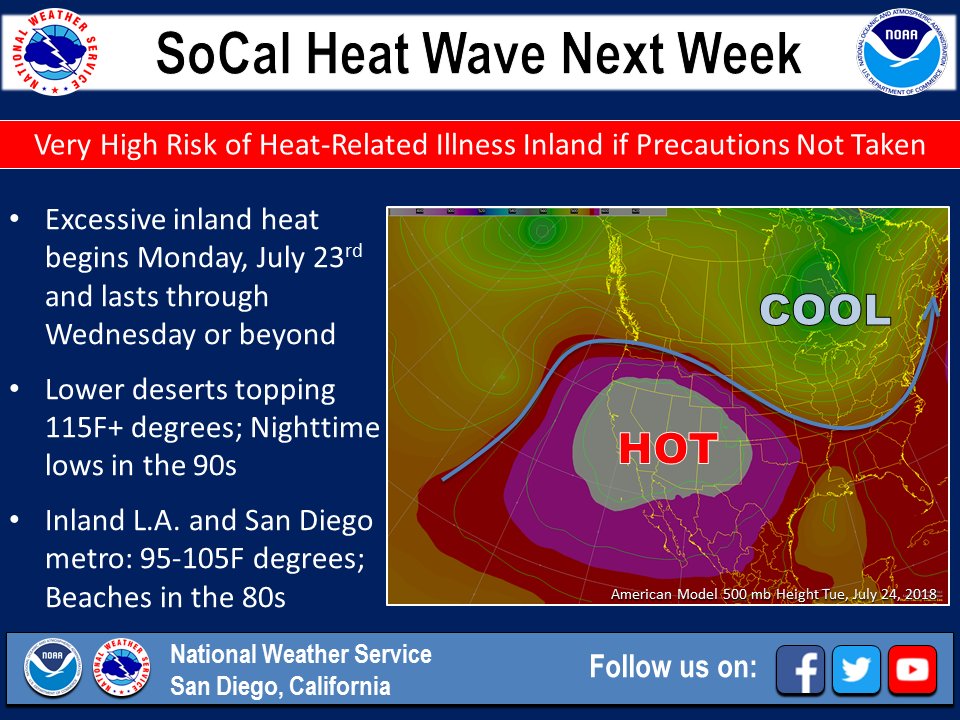 4:00 AM – 19 Jul 2018
Tomorrow heat for most of the nation won’t be that bad by mid July standards outside of the south-central states and Southwest:

It still can get cold in this day and age of climate change. I’m expecting more ET reports like these through the end of July across the Midwest and Northeast:

All-time Temperature Record likely broken! It won’t be official until midnight, but with the temperature only dipping to 81 degrees this morning, Lubbock likely has recorded the warmest night in over 100 years of records! 79 degrees was the previous record. #lubwx #txwx
6:29 AM – 19 Jul 2018

A hearty congratulations to Mother Nature! The “low” this morning at MAF was 77 degrees. This ties the record max min for the date set in 1989 and 2001. Since the odds are about zero that we will cool off below 77 degrees before midnight this record should stand. #txwx #nmwx
7:39 AM – 19 Jul 2018