Arbitrarily today, Friday, is the third day of a historic heatwave for the south-central states centered on Texas. We can describe this event as historic not so much because of the duration of the event but because of how high temperature across many locations will exceed records. To start out today’s post let’s take a look at yesterday’s national maxes:

The heart of the heat Thursday was across north-central Texas into western Oklahoma where many sites exceeded 110F. Thankfully this year just like in 2017 intense, life threatening heat such as this has been confined to relatively small areas of the CONUS. The Midwest and Northeast saw pleasant temperatures for mid summer.

Temperatures across the south-central U.S. area will be similar today to those of Thursday, so it’s no wonder that we see widespread areas of excessive heat warnings and heat advisories:

Let’s look at some specific forecasts and advice from National Weather Service offices in the south-central United States:

Another record-setting day today. Highs will range between 100 and 110 degrees this afternoon. In addition, an elevated fire danger will exist across all but eastern parts of the area. Poor air quality in and near the DFW Metro is alos expected. #dfwwx #ctxwx #texomawx #abilene 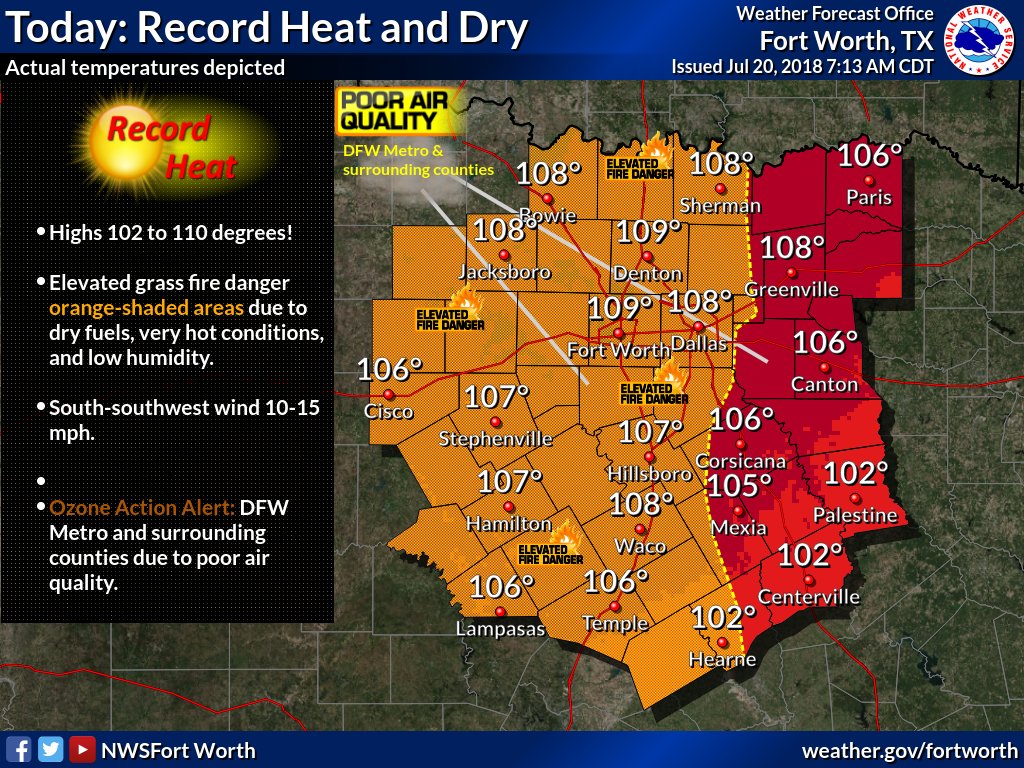 Heat Warning til Sunday and possibly into Monday. Tell your friends and families to LOOK BEFORE YOU LOCK! Could surpass 107 degrees which are the current records high today for Abilene set back in 1936 and San Angelo in 1925. #TXWX 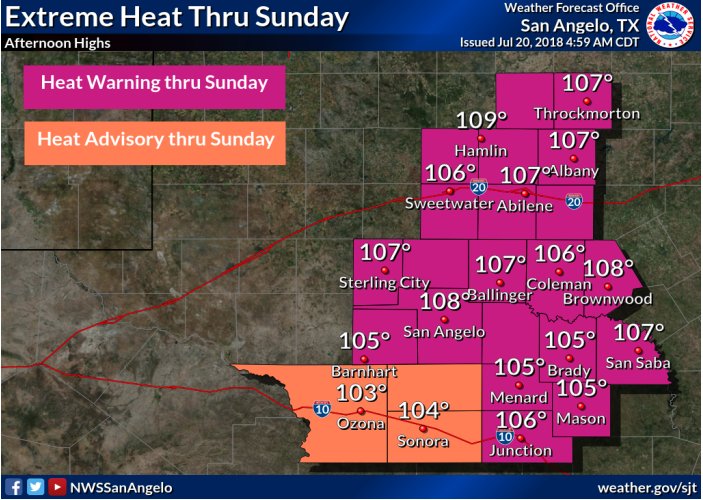 It’s only 10:30 am and a few locations have already reached 100 degrees.  Record heat is expected today, so please follow heat safety precautions.  Slightly cooler air may move into the northern half of Oklahoma on Saturday. #okwx #txwx 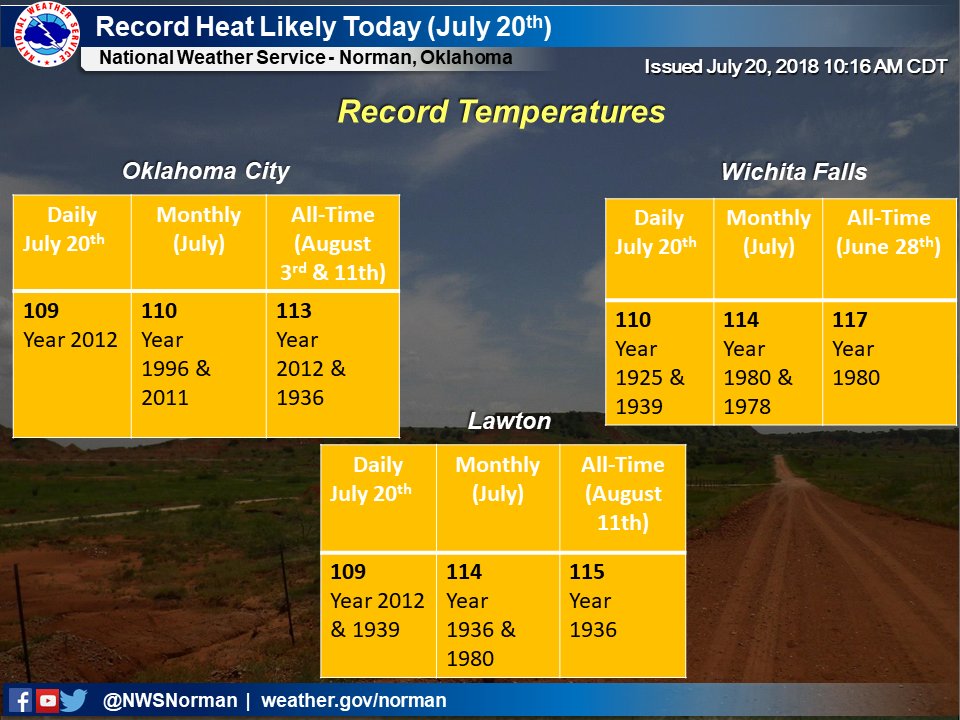 This map of Thursday’s high temperatures from the West TX Mesonet shows Friona was the “cool” spot at 99 degrees while many locations across the Rolling Plains were 110 or hotter! High temps will be similar today. Please take this heat seriously! #txwx 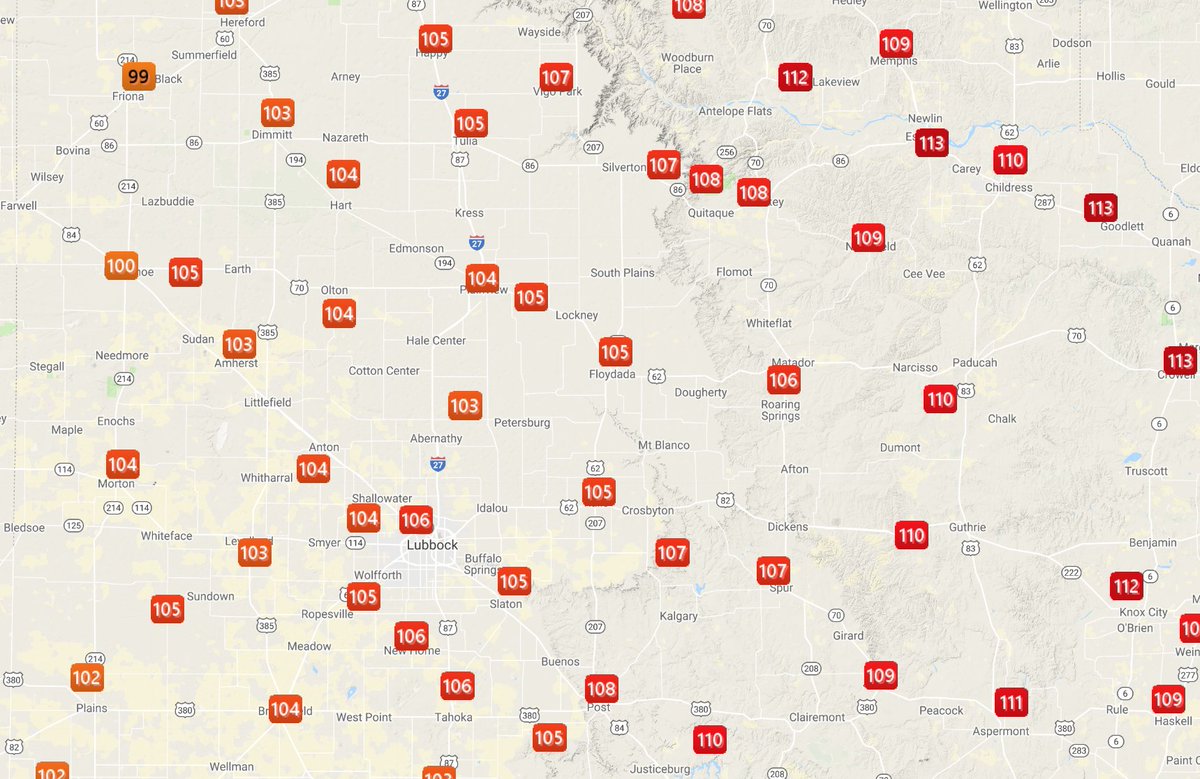 Here is a look of current records through Monday and the current forecast. Many records will be tied or broken over the next 4 days.

If you thought yesterday was hot, today will likely be hotter. Please practice heat safety today to avoid a trip to the hospital. Also remember to properly shelter your pets and NEVER leave anything alive in a vehicle. #phwx #txwx #okwx #heatwave #HeatSafety 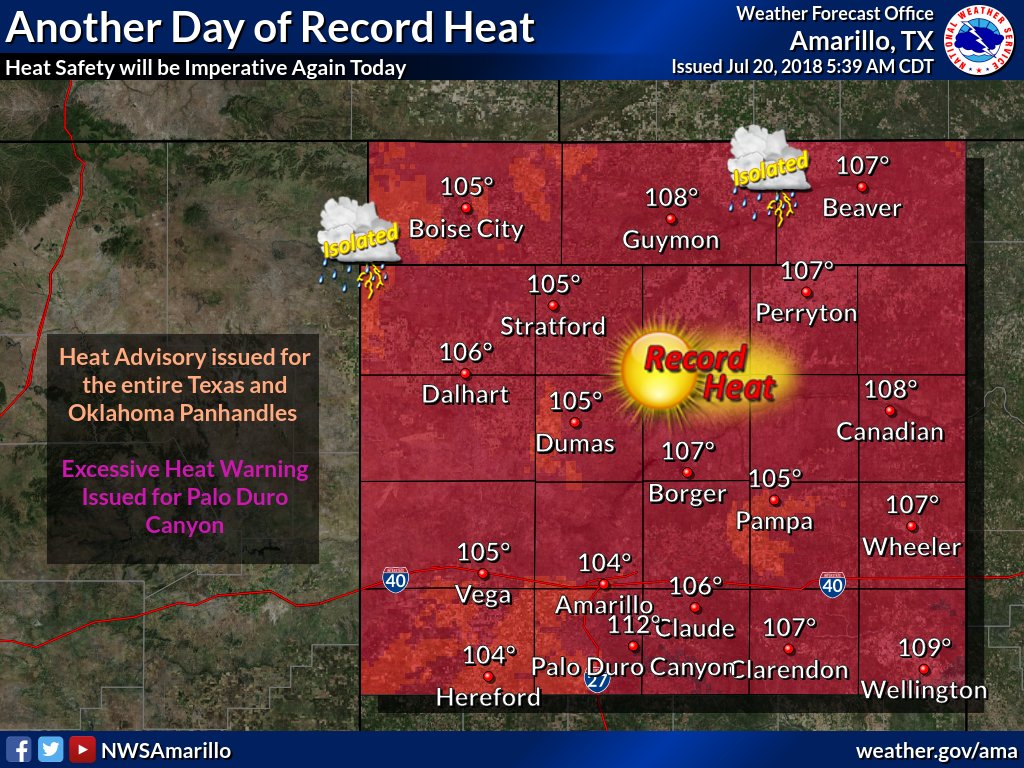 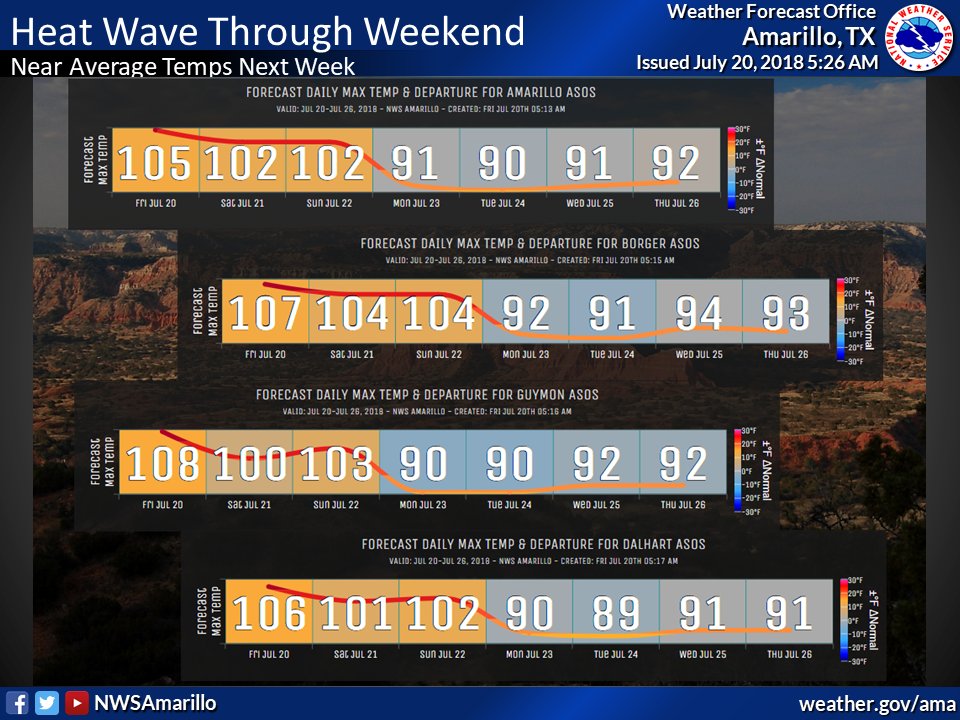 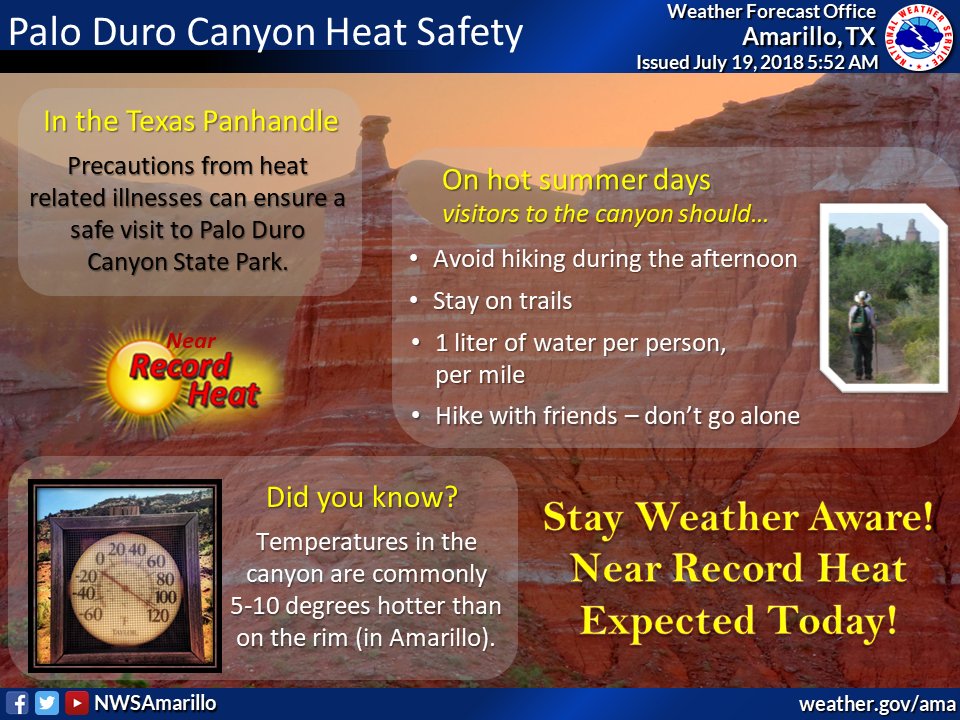 Notice that once more this season excessive heat warnings are posted for Southern California:

A long duration heat wave with record-breaking temperatures is possible next week for much of southwestern California. There is the potential for high heat risk mainly for interior locations including the valleys and mountains Monday through at least Thursday. #cawx #LAWeather 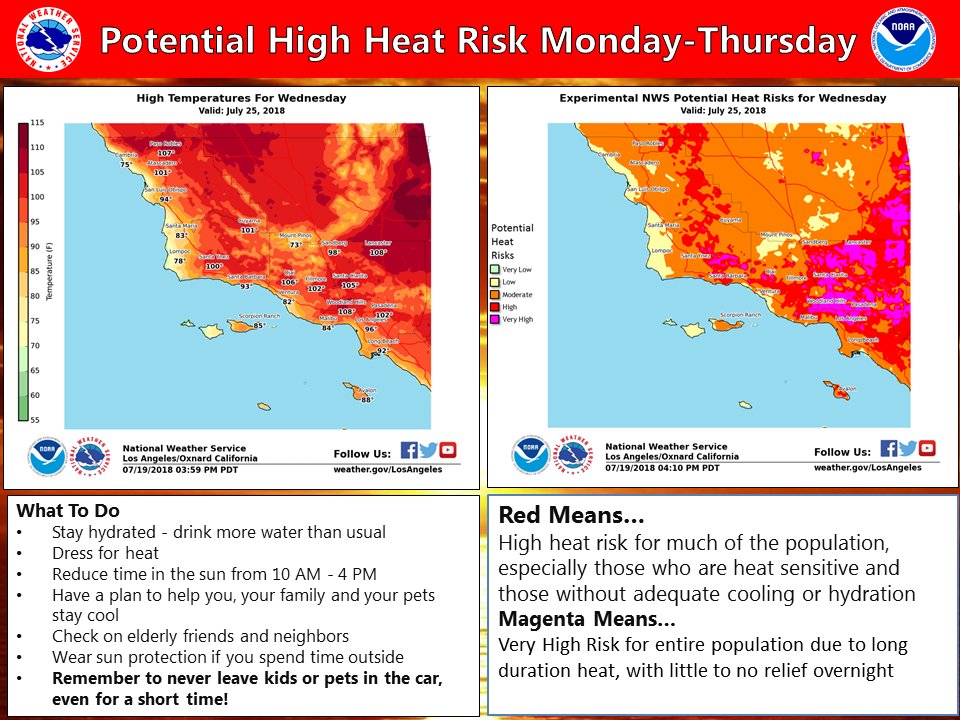 6:35 PM – 19 Jul 2018
Just north of the heat dome responsible for producing record temperatures in the southern Plains a “spring like” closed low produced deadly severe weather in the Midwest. Dr, Jeff Masters has written a good summary of the event here:
https://www.wunderground.com/cat6/Tornadoes-Rake-Iowa-Dangerous-Severe-Weather-Outbreak-Expected-Friday

#TORNADO in #Marshalltown as viewed in 3D. This storm TOWERED to 60,000 FEET when the storm swept through. Look at the incredible “vault” of precipitation-free inflow. This storm is as bad as it gets! 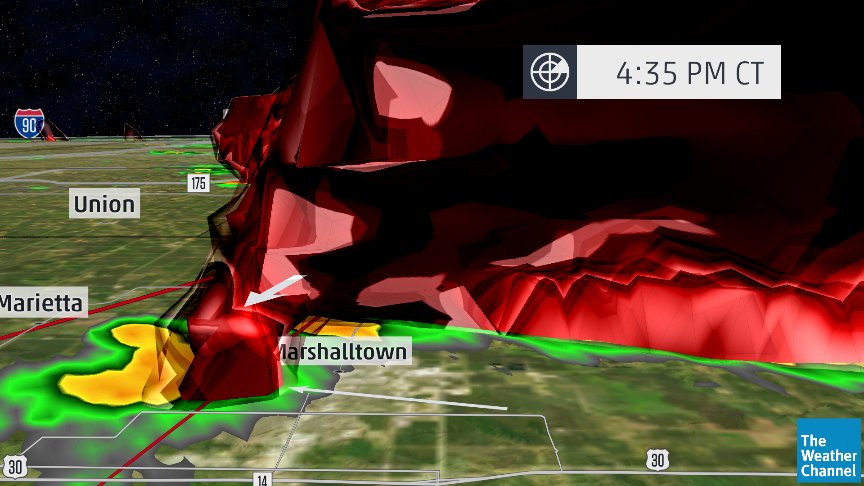 There is a moderate risk for severe thunderstorms this afternoon and evening across much of the Ohio and Tennessee Valleys.  There is potential for tornadoes, widespread wind damage and large hail across this area. 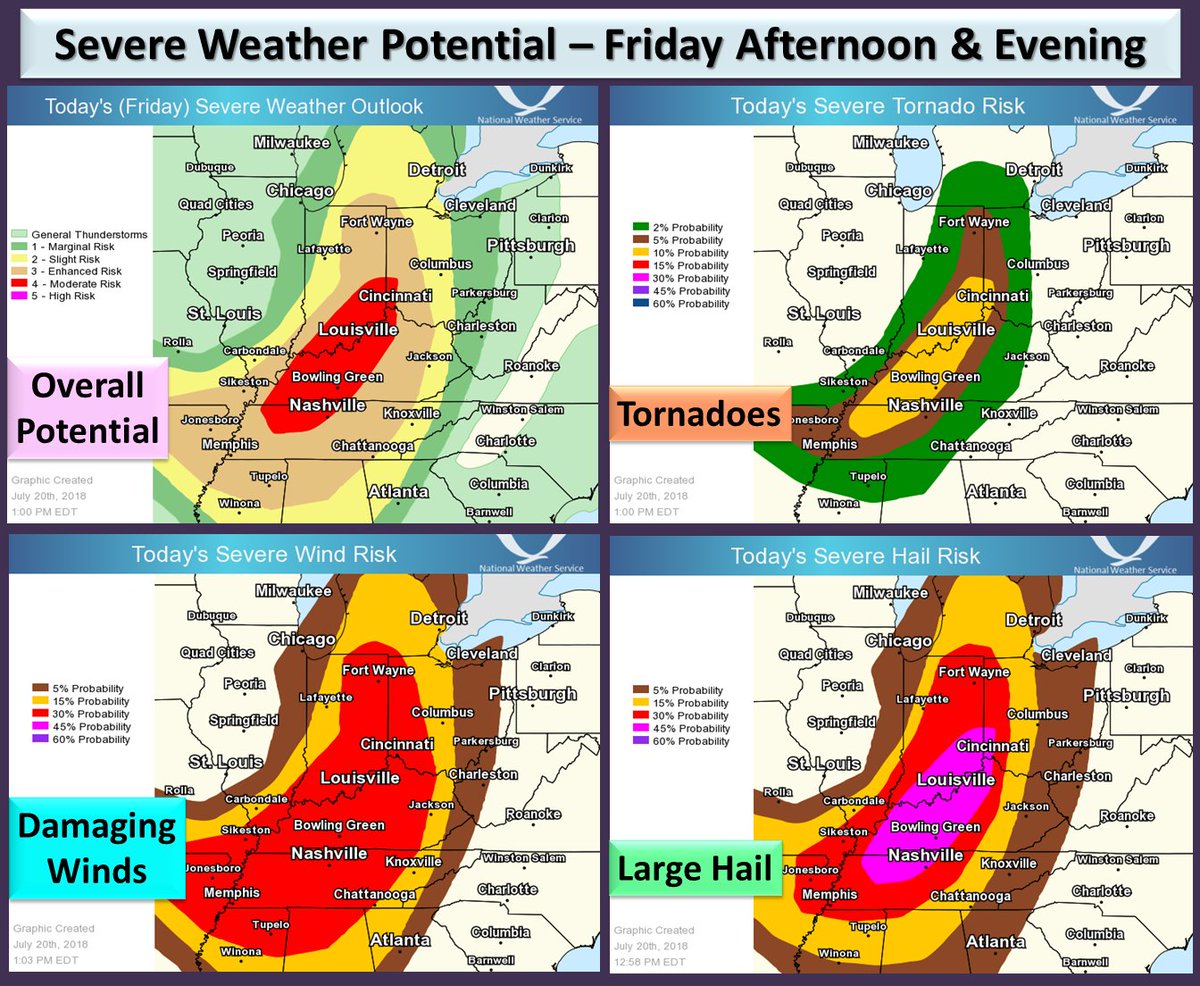 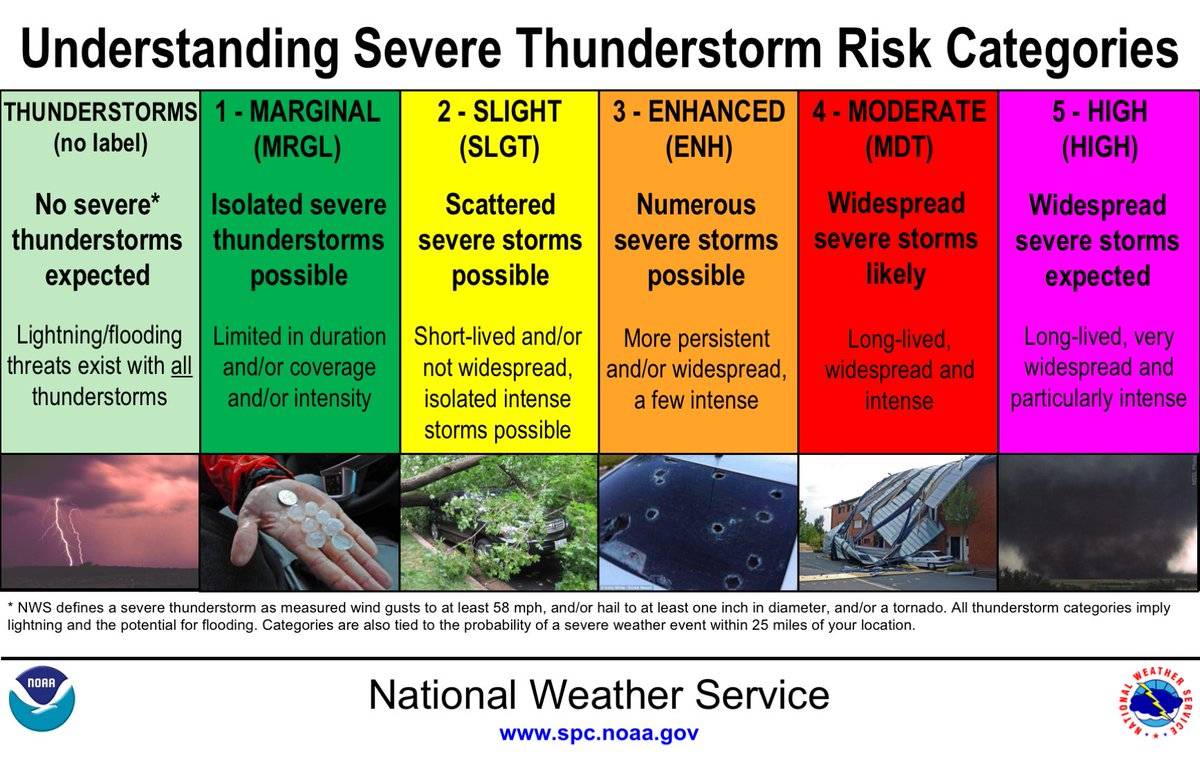 10:08 AM – 20 Jul 2018
I’ll emphasize here that both the record heat in the southern Plains and Southwest, and the midwestern severe weather can be tied to yet another North American Dipole pattern, which is being influence by Global Warming. My educated guess may (or may not if no studies are done) be confirmed by attribution studies, which take considerable time and effort to complete. This morning we see the heat dome over the south-central states with two upper level lows being forced southward due to more warmth aloft over Canada:

In the meantime the very least that outlets such as The Weather Channel can do is link historic heat waves, like the early July Los Angeles Inferno, to climate change during regular weather presentations. 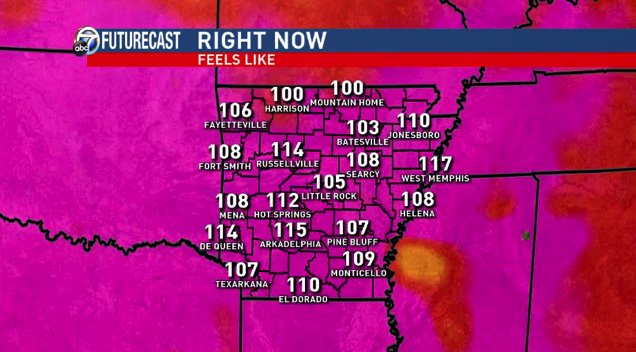 Just about every station in Oklahoma and north Texas set records. It’s starting to get hotter in the Southwest. Temperatures were pleasant across the northern tier of states
(If you like these posts and my work please contribute via the PayPal widget, which has recently been added to this site. Thanks in advance for any support.)
The Climate Guy