Since I started this site in 2017 dealing mainly with extreme temperatures I feel like I am living a meteorologist’s groundhog day, constantly reporting on record heat from the great state of California. Well, as one great President from California, Reagan, once stated, here we go again. This time around though due to a Dipole pattern not much relief will be in the offing through the end of July.

Due to the Dipole the two coasts have big contrasts. The West is smoldering while the East is drowning. Heat advisories have been dropped for most of Texas but are now expanding into the Pacific Northwest.

It would appear that Wednesday will be the peak of this heat wave in Southern California this week, but due to the strength and orientation of the heat dome expect temperatures to be well above average for many days to come. We’ll see if at least it cools off towards the beaches by this weekend, though.

Across the country here is the temperature profile for tomorrow:

Records will be set from Arizona westward into California. Hot car deaths are still a threat east of the Rockies, but temperatures there for late July are not be that bad.

Our heat dome will peak out around 600 decameters and be centered on the California deserts Wednesday:

Heights do come down, but look where that ridge is centered a week from Wednesday. You guessed it…about the same place:

Now let’s specifically look at forecasts for the West: 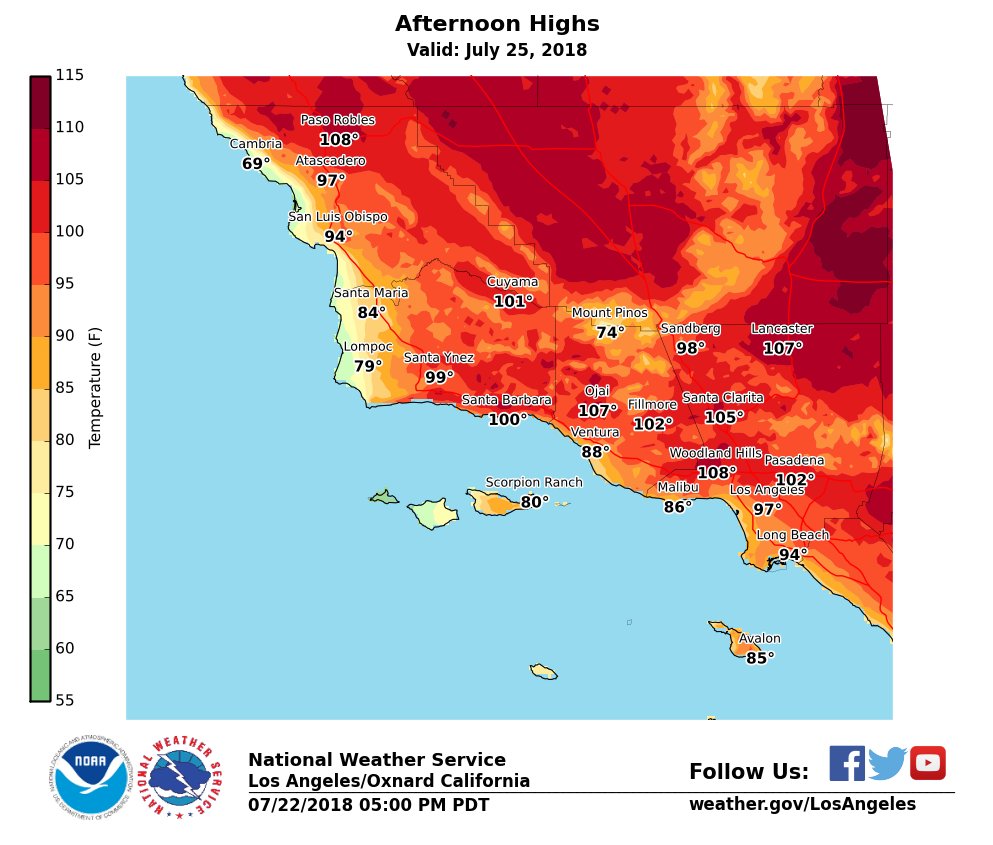 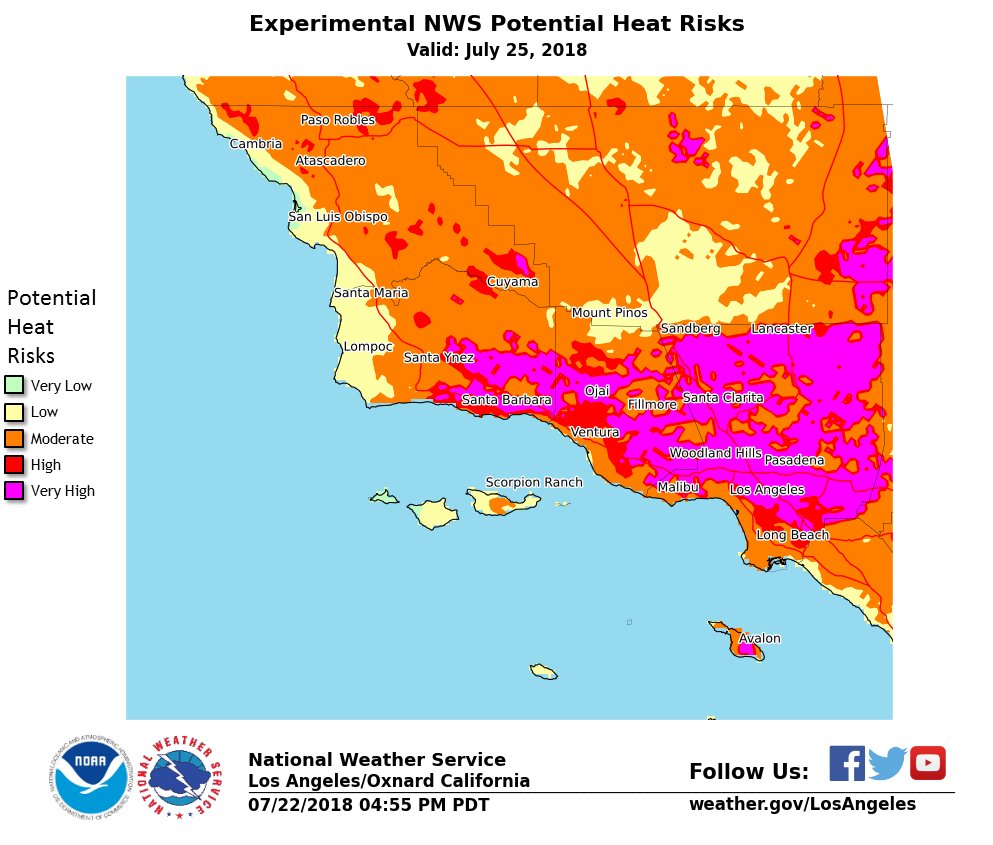 Extreme heat inland today–temps could exceed 120 in the lower deserts and 110 in the Inland Empire.  Elevated wildfire risk due to the heat.  Stay safe and remember NEVER leave a child or a pet in a car, even if you think it’s only for a few minutes!  #cawx #heat 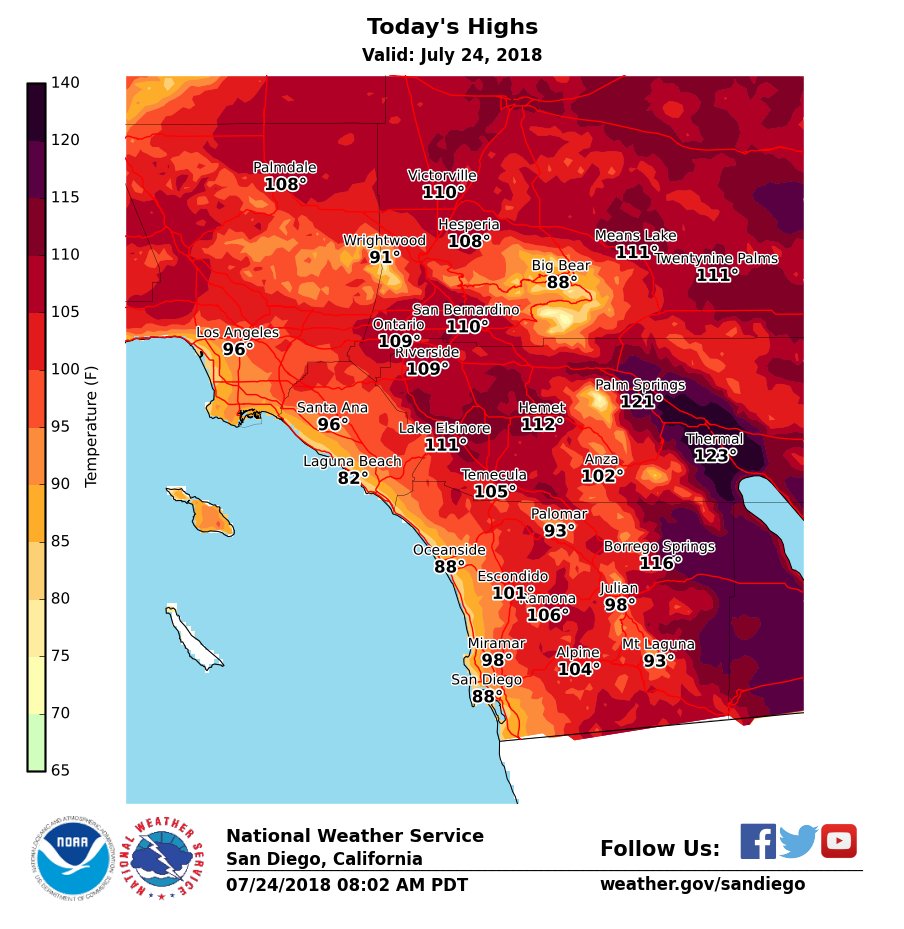 High pressure over the southwest U.S. will bring hot temperatures to Northern California over the next few says. A heat advisory is in affect for the central valley and foothills for areas outside the delta influence. #CAwx 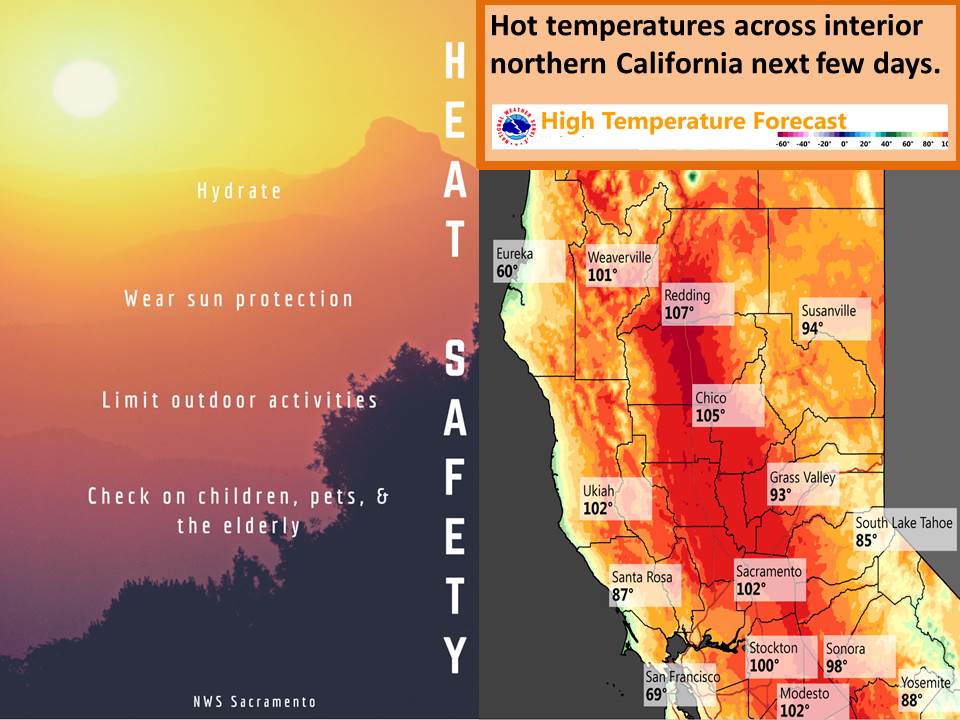 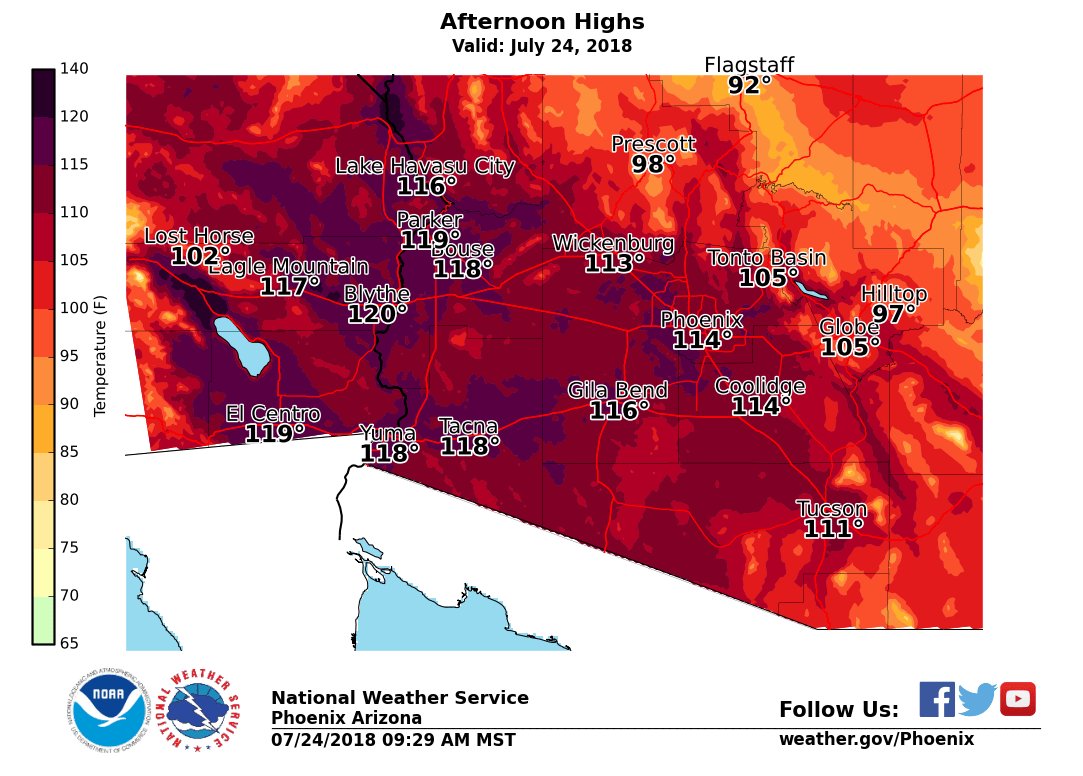 If you can, find someplace to #StayCool this week! Beginning today, an #ExcessiveHeat Warning in effect for the #Vegas forecast area. #nvwx #cawx #azwx #HeatRisk #BeatTheHeat 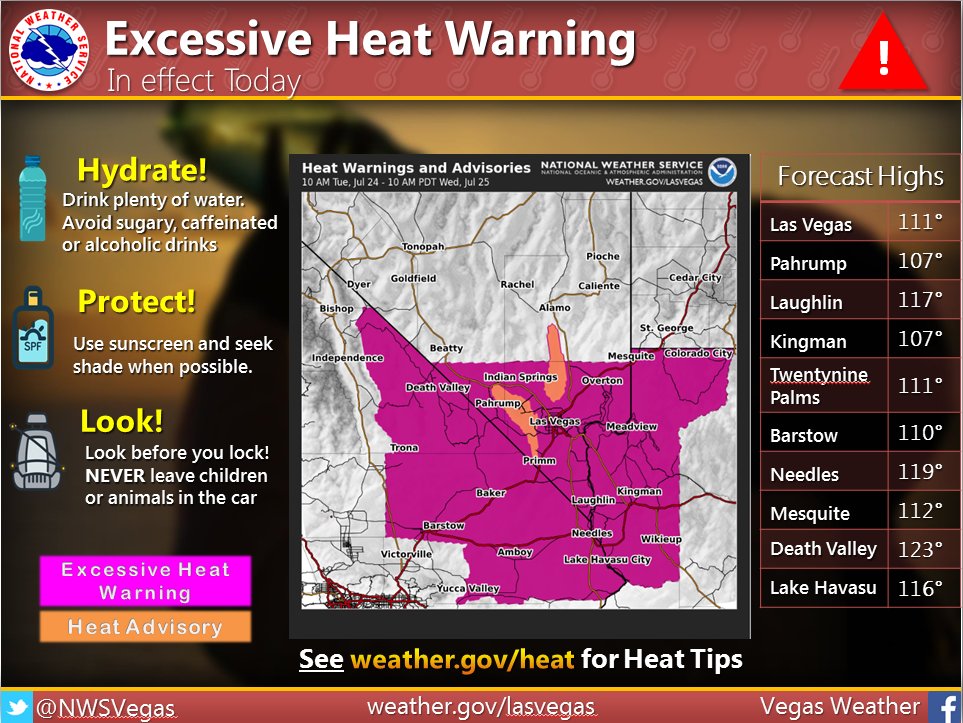 Warmer than usual ocean temperatures can bring higher moisture (muggy) in the form of the 70 degree dewpoint temperatures we are experiencing and they also can lead to warmer sea breeze or less cooling in heat waves, these are departure from normal sea surface temperatures #heat 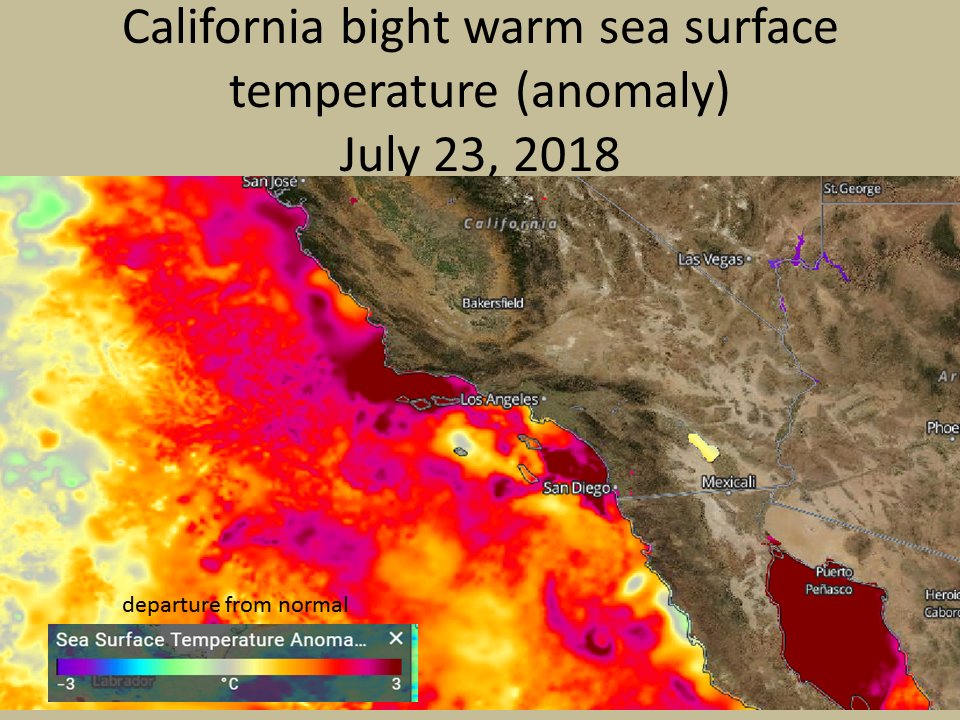 12:18 PM – 24 Jul 2018
When it gets this hot in California wildfires become a major concern. I’ll relate any major news in that front should conflagrations of any consequence break out.
……………………………………………………………….
As usual I will be adding relevant news and information to this post as the day progresses.
Here is some of  today’s heat related news:

west of #Athens
The heat is so intense that #Sentinel2

in today’s imagery, would only see an infrared spot
https://www.theguardian.com/world/2018/jul/23/greeks-urged-to-leave-homes-as-wildfires-spread-near-athens … 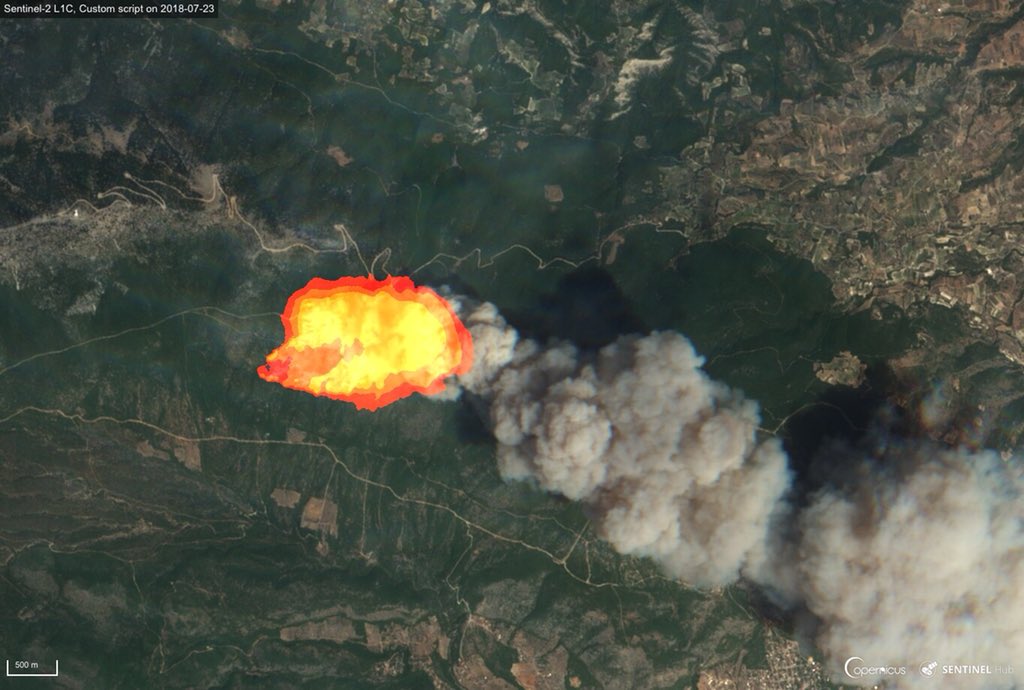 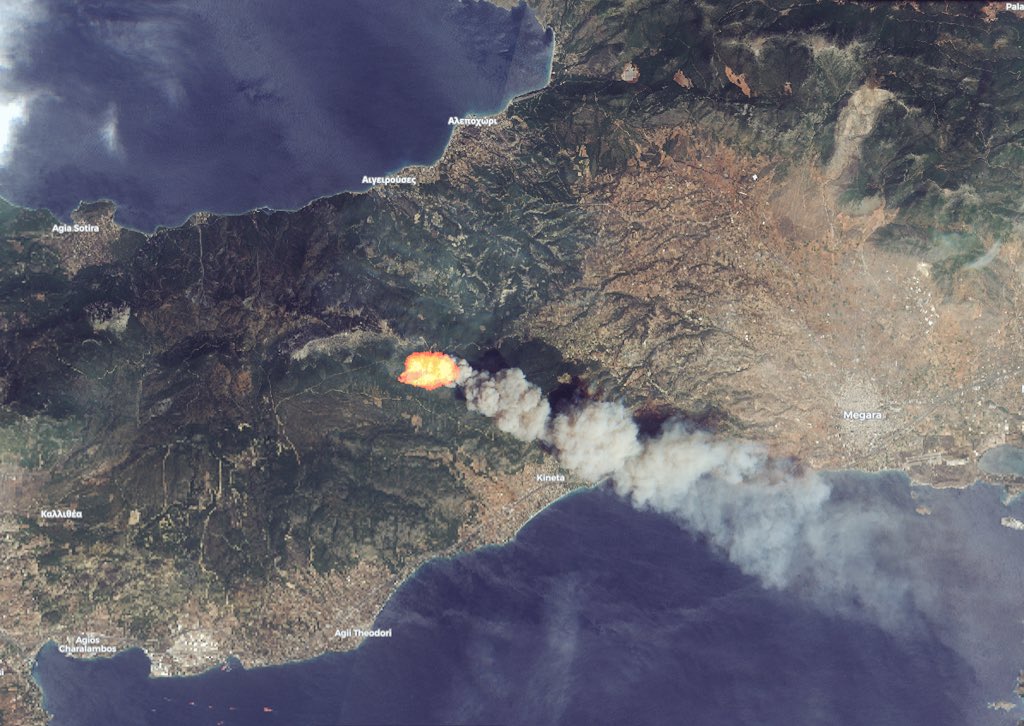 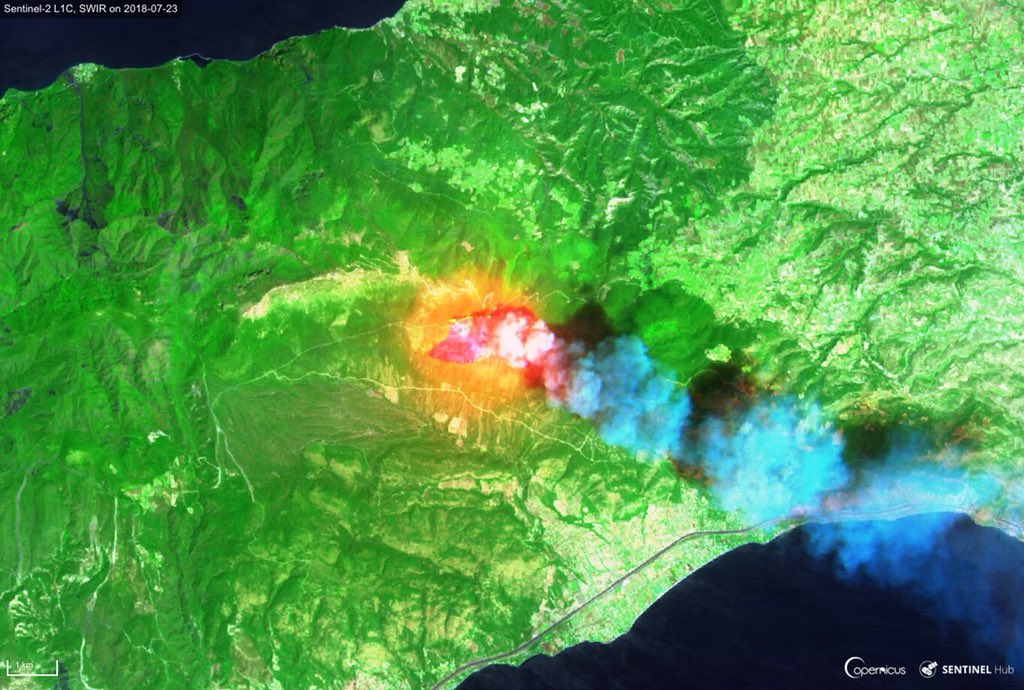 These fast-moving, wind-driven, and deadly #wildfires in southern Europe are highly analogous to the devastating North Bay fires near Santa Rosa, California last October. Much of Greece has Mediterranean climate and vegetation similar to California. #Athens #Greece #CAwx 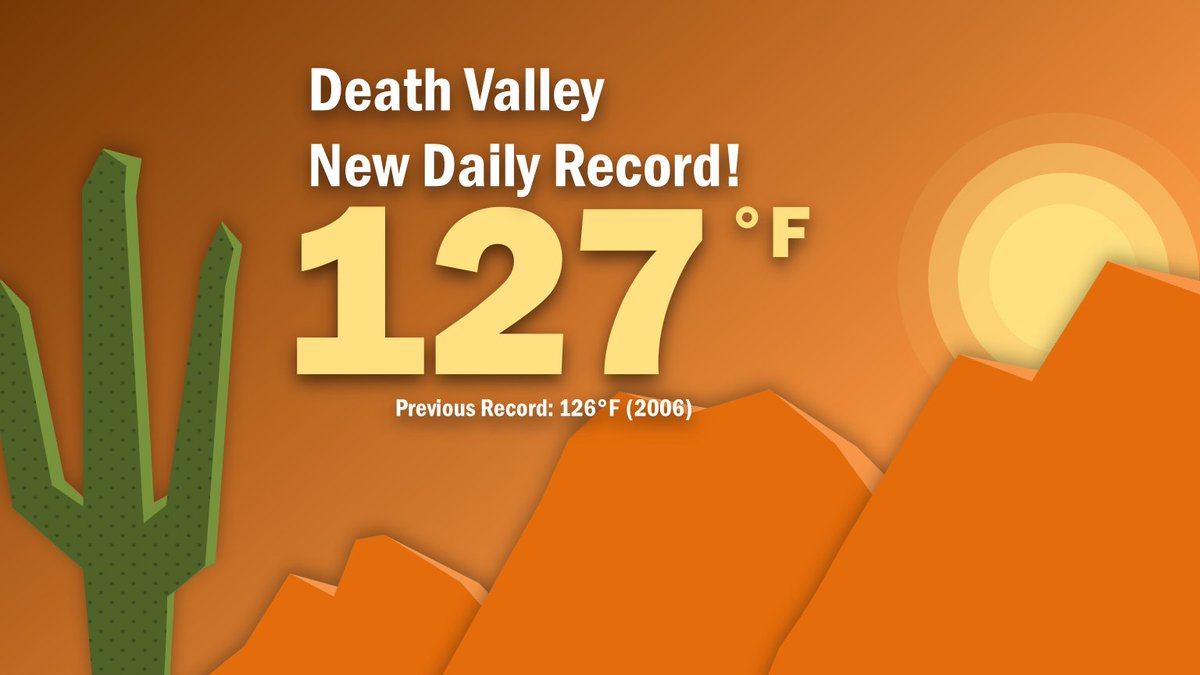 The Southwest is the only area of the country where there are major heat concerns. The deserts of the Southwest were brutally hot with many locations topping 120F.