Wednesday July 26th… Dear Diary. The main purpose of this ongoing post will be to track United States extreme or record temperatures related to climate change. Any reports I see of ETs will be listed below the main topic of the day. I’ll refer to extreme or record temperatures as ETs (not extraterrestrials)😊. Here is today’s main climate change post related hot topic:

The main purpose for this site is reporting on U.S. extreme temperatures, but when I get wind of exceptional planetary events I’ll report about those. Numerous climate writers have lumped many heat waves that have been occurring around the globe this July calling them Part of a “global heatwave.” Since the entire planet isn’t burning I won’t use this phrase trying not to sensationalize current events in association with global warming, sticking to the science. Perhaps I’m wrong here, and we need to use this reference writing that the planet is undergoing a global heatwave. You decide. In any case Europe is today’s topic since potentially all-time records will be set today into Friday across that continent.

“How is #climatechange involved in the record-breaking weather seen across the globe the past 2 weeks? 1) It’s driving overall warming that amplifies heat waves. 2) It’s increasing the frequency of unusual jet stream configurations like the one driving current N. Hemisphere heat.” 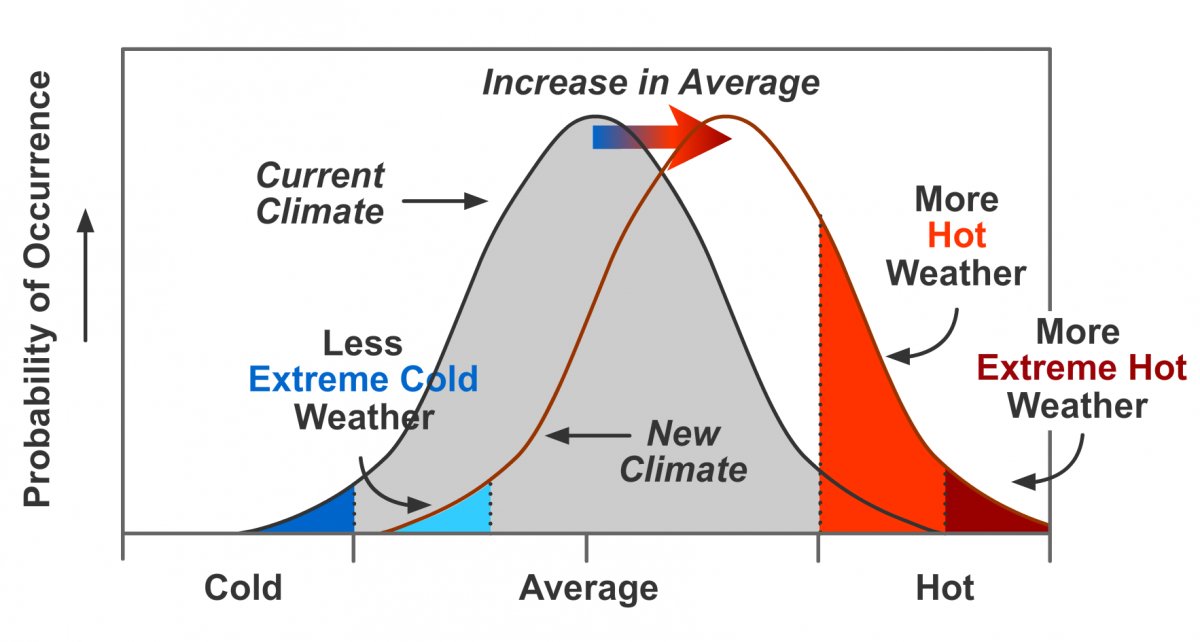 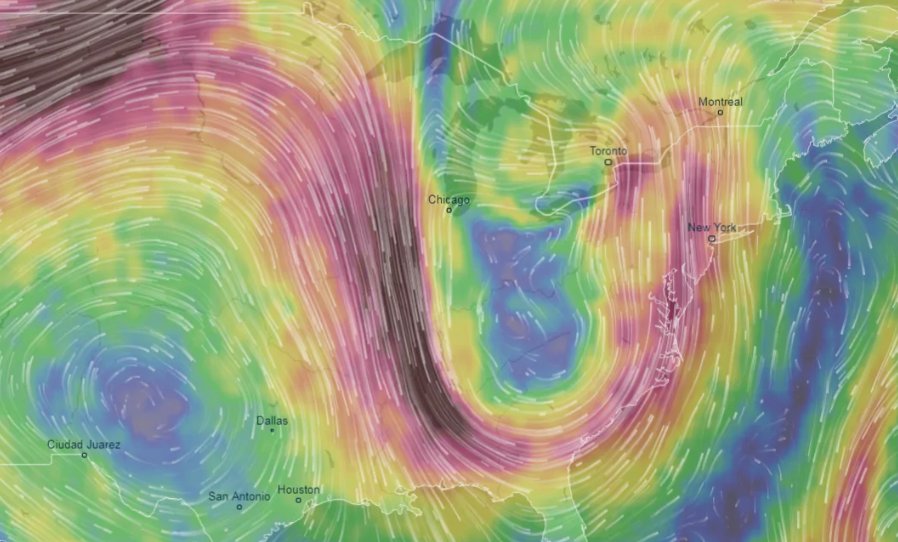 A couple of days ago I noted that the Scandinavian heat dome would come back big time late this week. Here is the current state of the heat dome across Europe:

Exceptionally high 500 millibar heights extend southwest from our building  Scandinavian ridge to France and Britain where there is a chance for all-time records. Note the high over low “Rex Block” in met speak configuration from Scandinavia southward to Greece. I contend that this is a climate change signal. As the years go by more and more warm air aloft is penetrating high latitudes squeezing relatively small cool pockets southward forming more of these blocks. A strong system located southeast of Greenland will move East and end exceptional heat in western Europe over the weekend:

So far I’m seeing these reports: 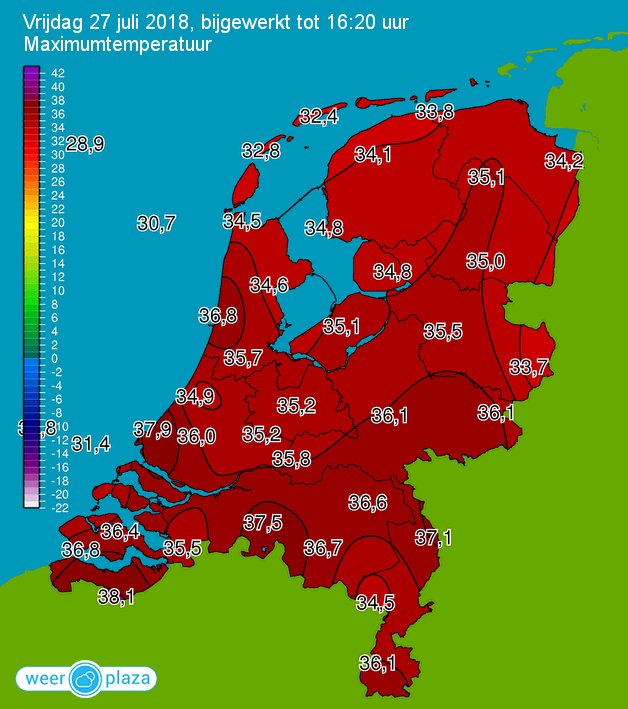 UPDATE: Heathrow has just hit 35 °C. Will this be the top temperature of the day, or is there more to come?

🌡️ Exceptional heat on the Benelux this July 26th, especially in #PaysBas which the monthly NATIONAL heat record of July was equalled! 38.2 °c at rainbow = 38.2 °c, 02-07-2015, Maastricht and several stations including #Rotterdam& #Amsterdam-Airport broke their absolute record! 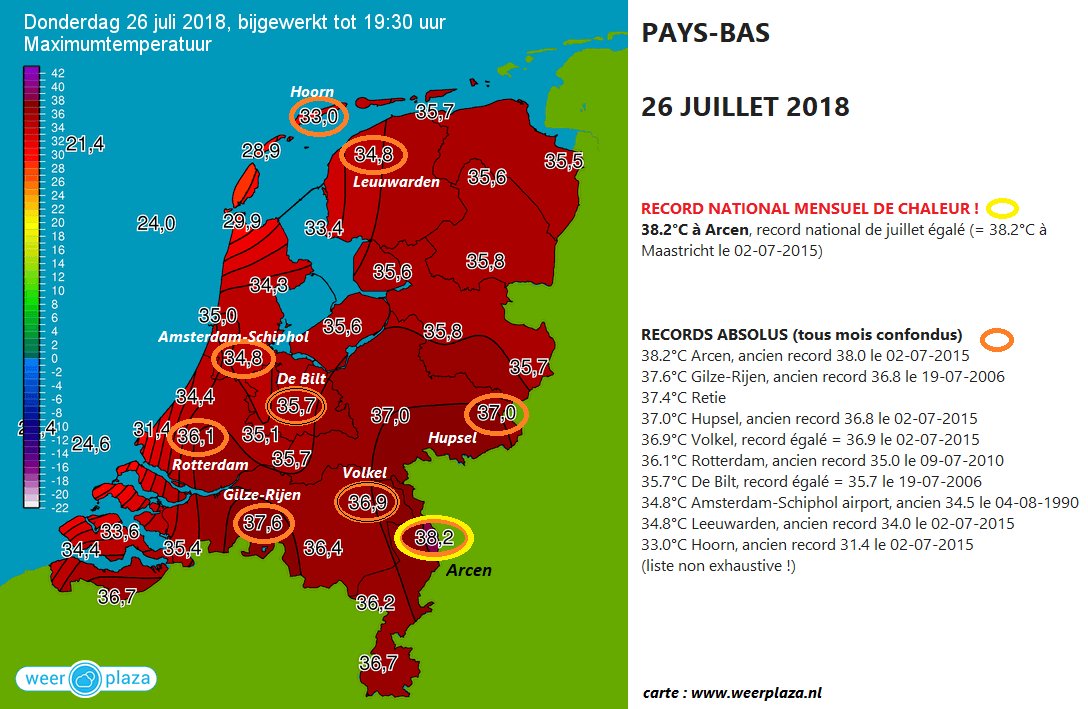 By now, with just an hour to go and temperature still above 27°C, we can safely say that today was by far the warmest day (24h average) on record at NL’s main met station. With ~28°C, it smashed the “all-time” (1901-) record by almost a full degree C! 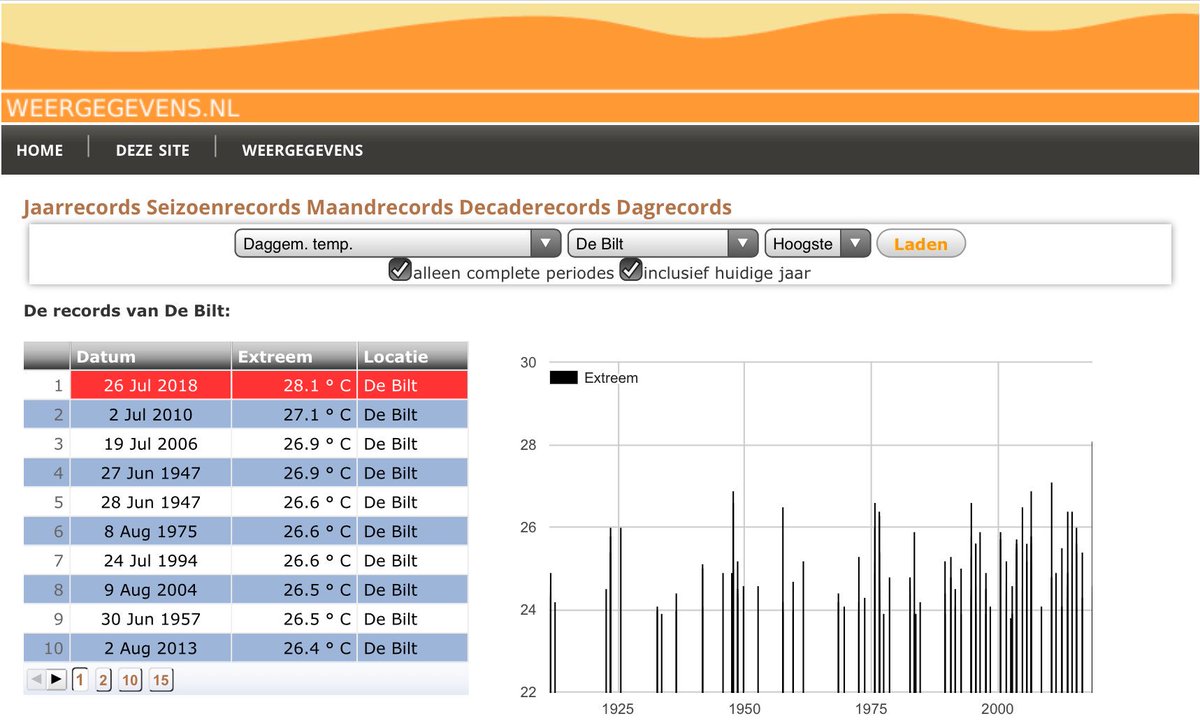 2:03 PM – 26 Jul 2018
Here is the take from the Washington Post on this European heat wave:
https://www.washingtonpost.com/news/capital-weather-gang/wp/2018/07/27/temperatures-near-or-pass-all-time-records-in-europe-as-another-heat-wave-blasts-the-continent/?utm_term=.523c03e1bce7

Dan Satterfield‏ @wildweatherdan
Good science piece here by AP’s top Science reporter Seth Borenstein. This  Europe heat wave is twice as likely to happen now, due to rising GHG’s. Seth talks to some of the brightest people I know in the piece. Kim Cobb and Michael Mann, Jennifer Francis.
2:36 PM – 27 Jul 2018
Europe’s worst bout with a heatwave this century occurred in 2003. We’ll see if that of 2018 breaks 2003 records. Hopefully we won’t see what happened in France since just under 15,000 of its citizens perished from the 2003 episode. Beyond a health crisis the 2003 heat wave produced a devastating drought over southern Europe.
I’m seeing images like this one this season from social media:

And this is Rovaniemi 3 days ago 🙂 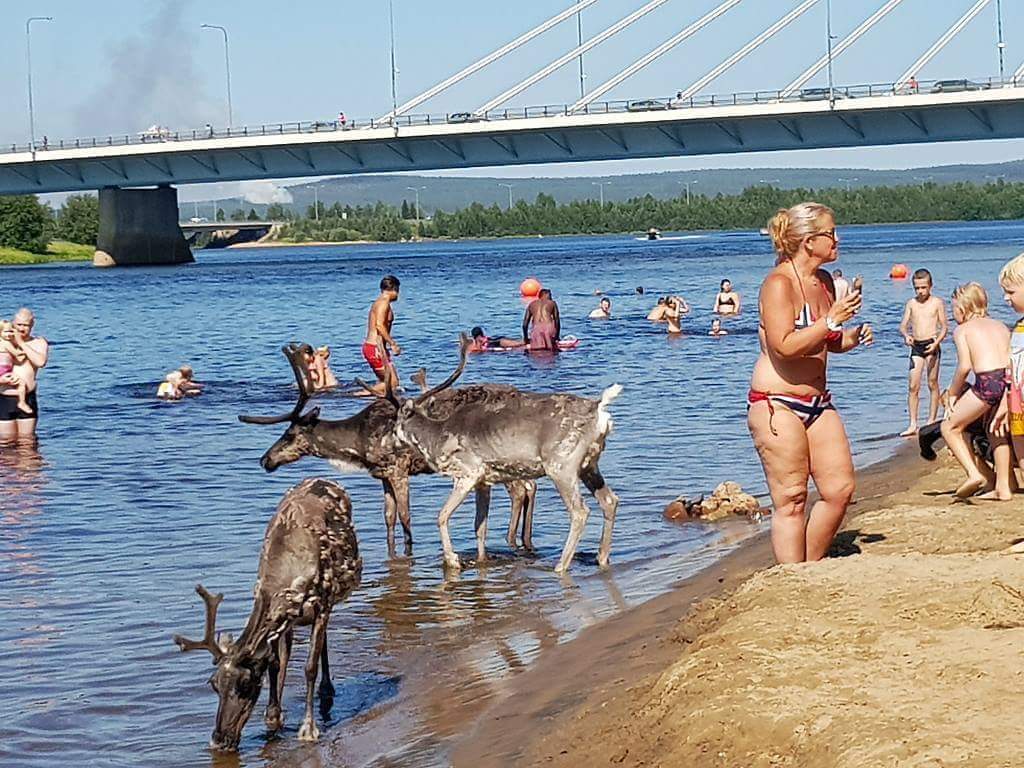 8:07 AM – 25 Jul 2018
What an odd looking photo. Residents were enjoying fun in the sun along with reindeer who are used to a chilly clime. It’s no wonder looking at the bath water left from the prior heat dome from earlier this month:

Incredible surface temperatures of the Baltic Sea and bathing waters of the Gulf of #Finlande, locally more than 25 °c (favored by low brewing + sun + air temperatures that leave > 30 °c this 25 July). 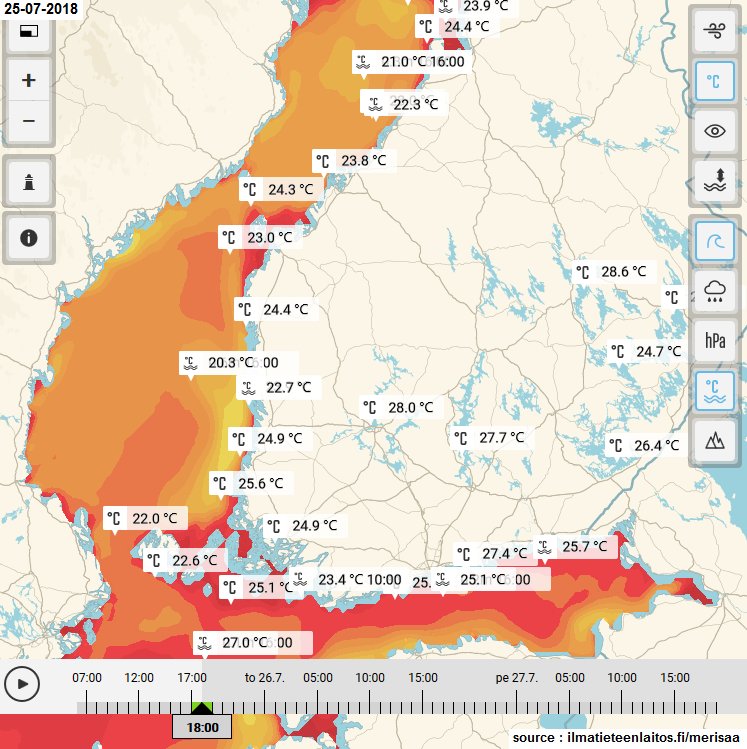 9:56 AM – 25 Jul 2018
By now most reading this post are aware of wildfires that have tragically killed 82 persons in Greece, an event very much related to this European heat:

On 24 July, the Emergency Management Service was #CopernicusEMS activated to monitor the #πυρκαγιές #Ελλάδα 🇬🇷. The maps produced so far indicate that approximately 32 km are influenced by the https://e.copernicus.eu/EMSR300. more here: http://copernicus.eu/news/copernicus-ems-rapid-mapping-activated-forest-fires-attika-greece

On 23 July, two large fires broke out in Attika, a region in the central-southern part of Greece. While a state of emergency was declared by Attika Regional Authorities, the European Union Civil Protection Mechanism was activated. Resources from across the EU have been transported in to assist with extinguishing the fire and attending to the affected population, including a transport plane with 60 firefighters from Cyprus and three water bombers from Italy and Romania.

The fires broke out near seaside resorts, sending residents fleeing towards nearby beaches and evacuating by boat. According to media, at the time of writing, the number of casualties has reached 82. More than 700 people have been evacuated and at least 164 people are being treated for injuries.

The Greek General secretariat for Civil Protection activated the EMS Rapid Mapping Component on 24 July. Delineation maps, showing the extent of the burn, have been produced over two Areas of Interest (AoIs): Geraneia and Rafina. Additional maps are being produced for further monitoring. The maps produced as of Wednesday evening on 26 July show, in aggregate, approximately 3,200 ha burned by the fires. 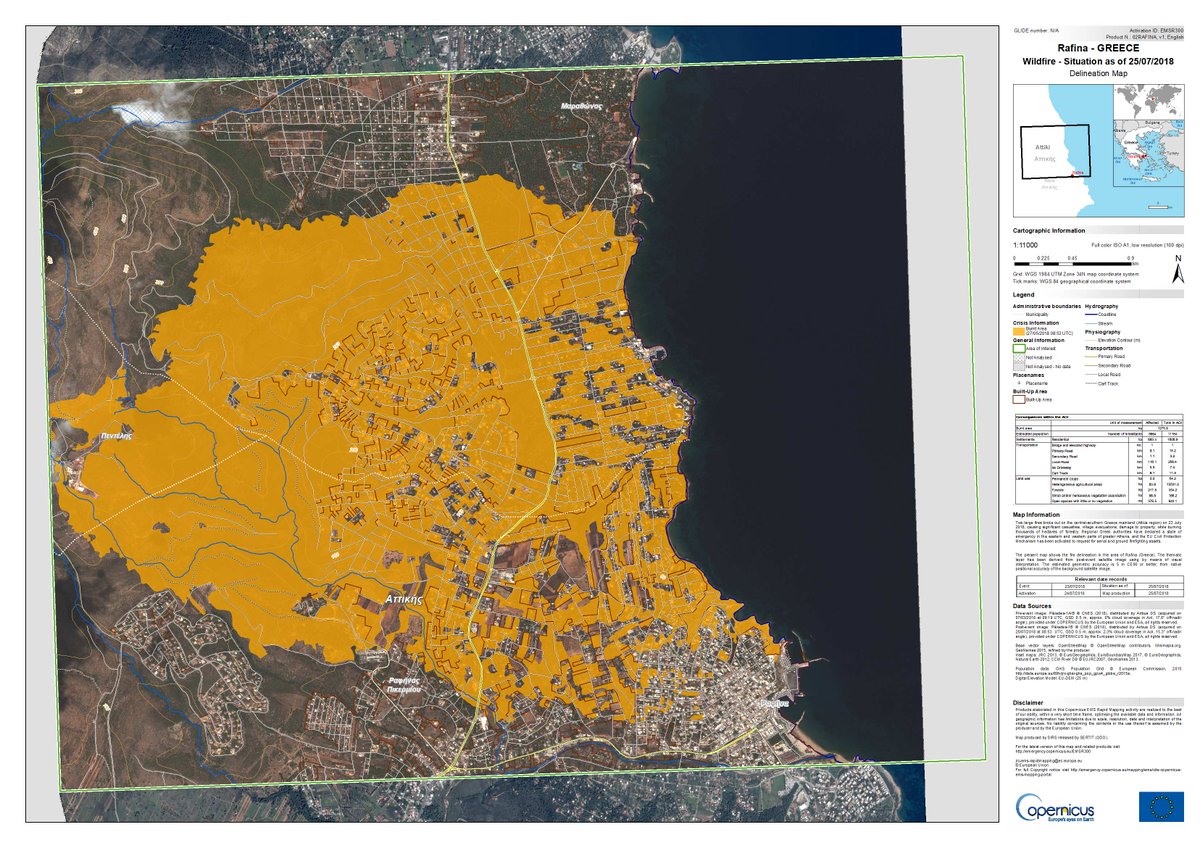 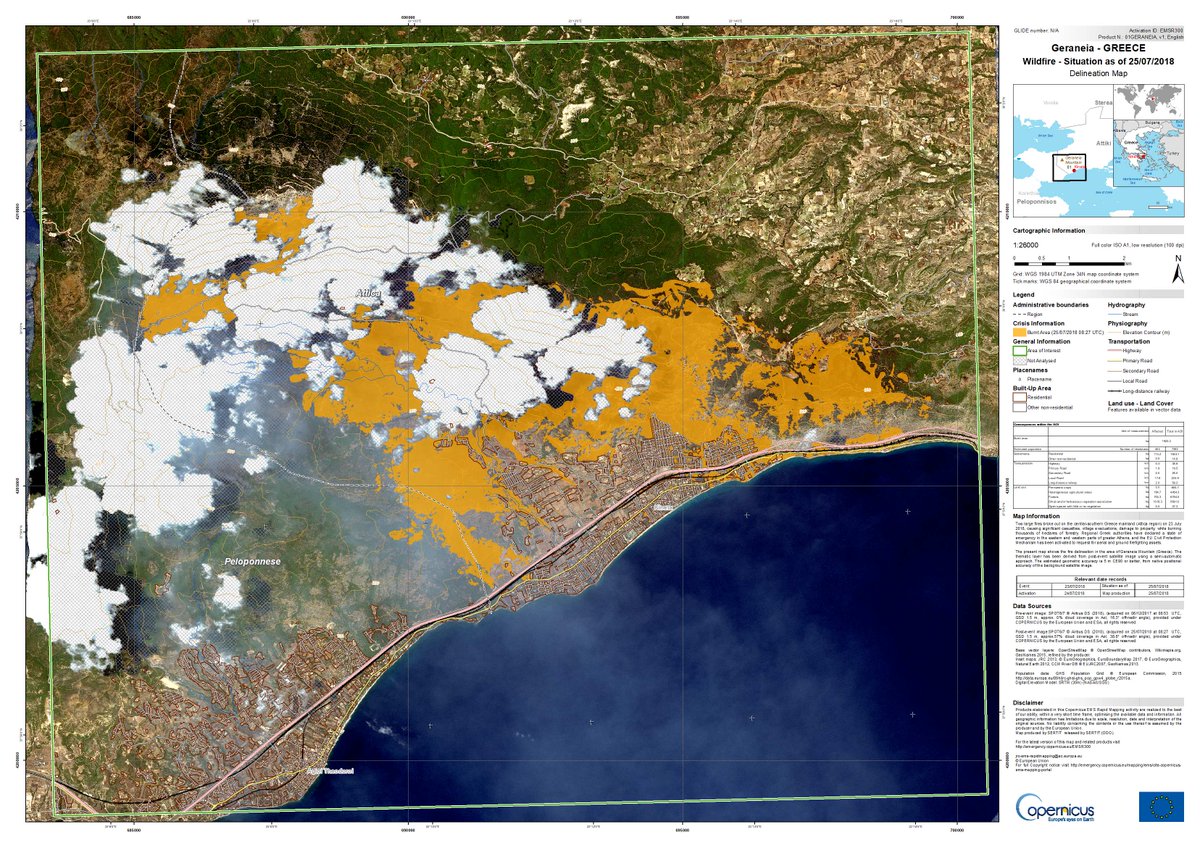 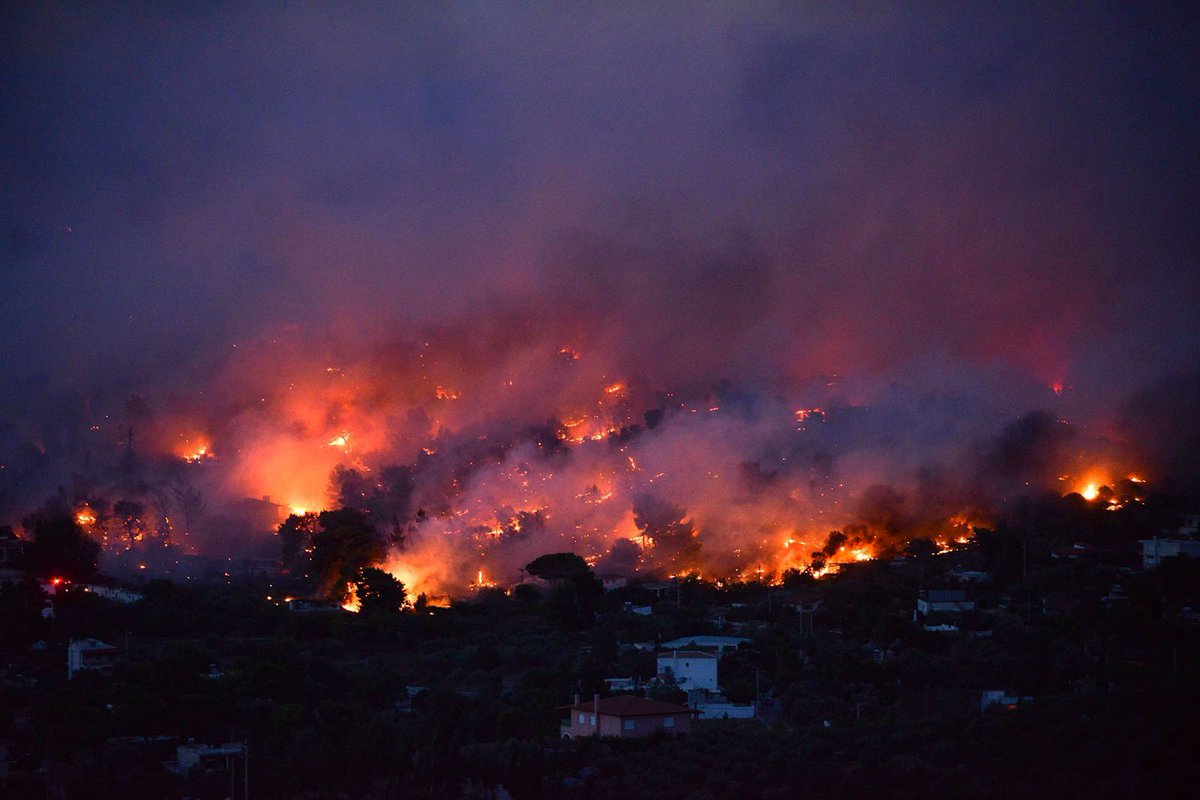 9:12 AM – 26 Jul 2018
In Britain the current heat wave and associated drought will disrupt food supplies:
https://www.reuters.com/article/uk-britain-eu-food/uk-heatwave-will-hit-food-supplies-could-worsen-brexit-disruption-food-lobby-idUSKBN1KF16L
Quoting from this article:

Ian Wright, director general of the Food and Drink Federation (FDF), said if Britain left the EU next March without a deal, disruption at customs and border crossings could impact food supplies.

He also said Britain’s long spell of hot sunny weather and little rain would start to hit supplies in the autumn.

“We’re going through the most extraordinary summer and we’re already seeing farmers struggling with crops, with feed for ruminants (cattle and sheep). There are vegetable shortages because there hasn’t been enough rain,” Wright told BBC radio.

Look at how the UK is turning brown after the lack of rainfall (Photo source: @metoffice) #Summer2018 #ukheatwave 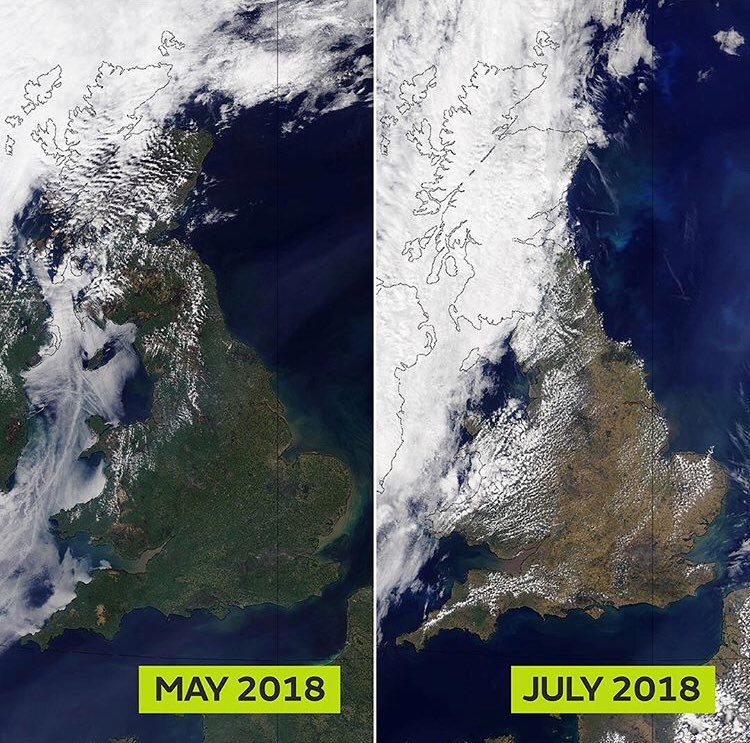 6:27 AM – 18 Jul 2018
In the sense that unprecedented record temperatures are occurring in Scandinavia, this heat wave is even more odd that that occurring in 2003. The Heat dome there will not budge much this weekend preventing the system moving in from off the coast of Greenland to change the overall warm to hot weather patter. By August 1st very high 500 millibar heights will persist and get even warmer for most of the continent:

As more reports come in from Europe I’ll be adding them to this post.
……………………………………………………………………………….
Now back to the U.S. western heat wave. The heat episode peaked Wednesday but will still be intense enough to produce more daily records for days to come. Heat advisories have been discontinued for the Phoenix area but remain up for much of the west coast:

Advisories are also up for Southwest Wyoming.
Temperatures on Friday will be similar to those of today:

Once more most of the Midwest is living large having some of the most comfortable temperatures in mid-latitudes across the Northern Hemisphere.

As our “Great Valley Bakefest” continues, some perspective… Phoenicians are sweating through nearly double the amount of above normal days than we used to (compared to the 1970s.) #abc15wx #phoenix #azheat #azwx #climatematters @ClimateCentral 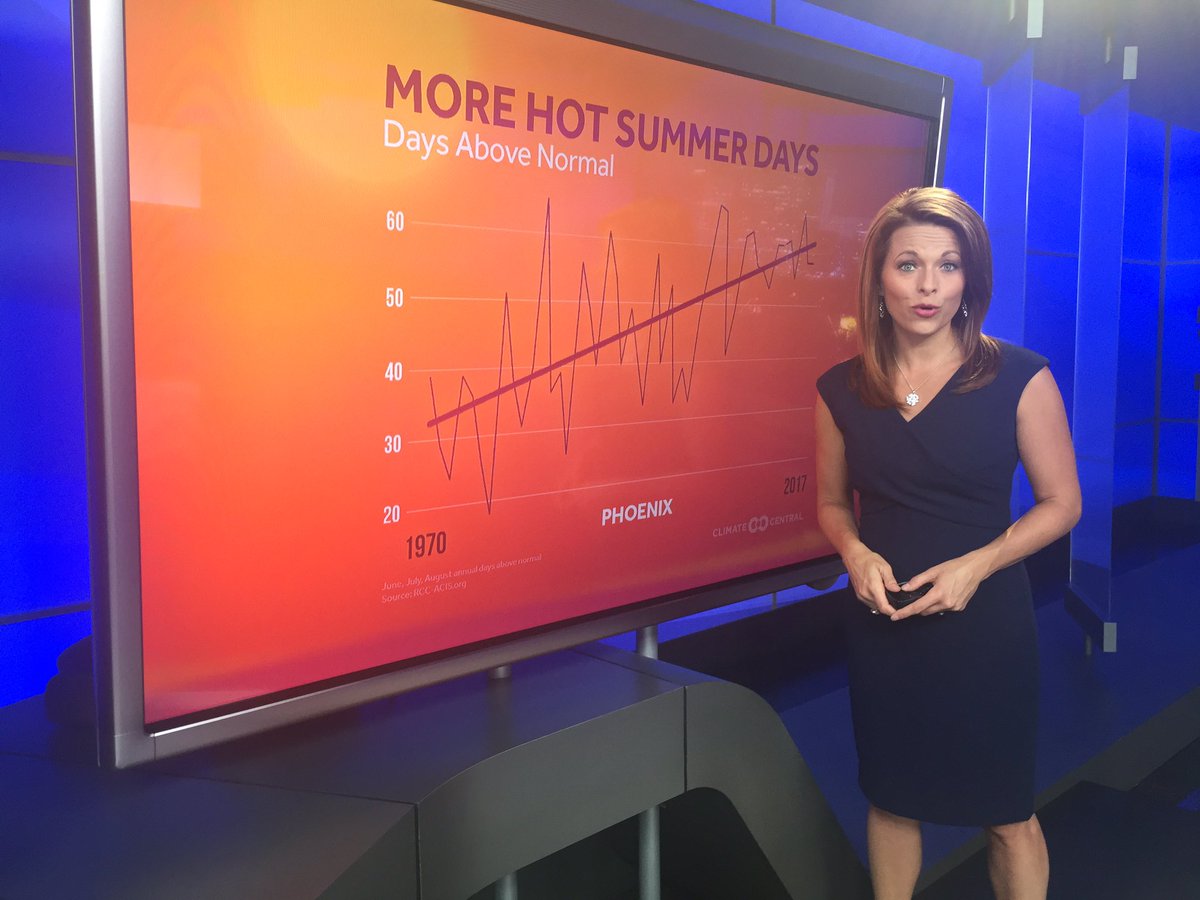 Excessive Heat Warnings continue through Friday. Here’s a quick look at the next couple of days for a few of our hotter spots. #VegasWeather #nvwx #azwx #cawx 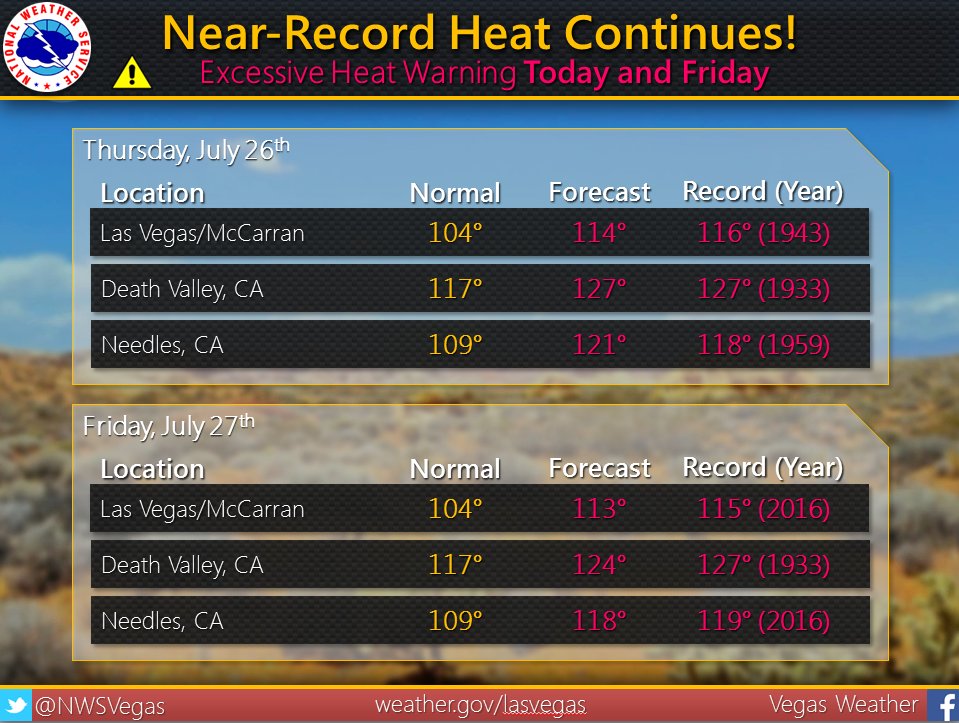 #Heat advisories for all #SoCal coasts have been dropped today due to a deeper marine layer. Still dangerously hot inland, but cooler with afternoon seabreezes closer to the ocean. Graphic shows where  excessive heat remains for inland areas. #CAwx #LAHeat

Hot off the presses (pardon the pun😉)  here is more global warming news from Jason Samenow:

Here is todays one big ET:

Death Valley tied their Daily Maximum Temperature Record for 7/26! It tied 127F in #DeathValleyNationalPark! This last occurred in 1933. This data is preliminary. #cawx #TemperatureRecords #Records @DeathValleyNPS