Unfortunately with more heat waves associated with carbon pollution come more wildfires, and as we have seen in the last two summers these fires spread into urban areas targeting the state of California. Last year the worst blaze was the Thomas Fire, was an out of season conflagration occurring in December 2017. Today a conflagration known as the Carr Fire is already invading one of California’s larger northern cities, Redding. What makes this situation worse than say just a couple of decades ago is the fact that the meteorological heat dome over California is strong and won’t be moving away from the area the next several days. Wildfires even in arid areas let up some at night due to cooler temperatures and a slight increase in relative humidity, conditions that aid fire fighting efforts. This won’t be the case for the Carr Fire.

There is plenty of information and photos of the Carr Fire on social media. Here is a sampling: 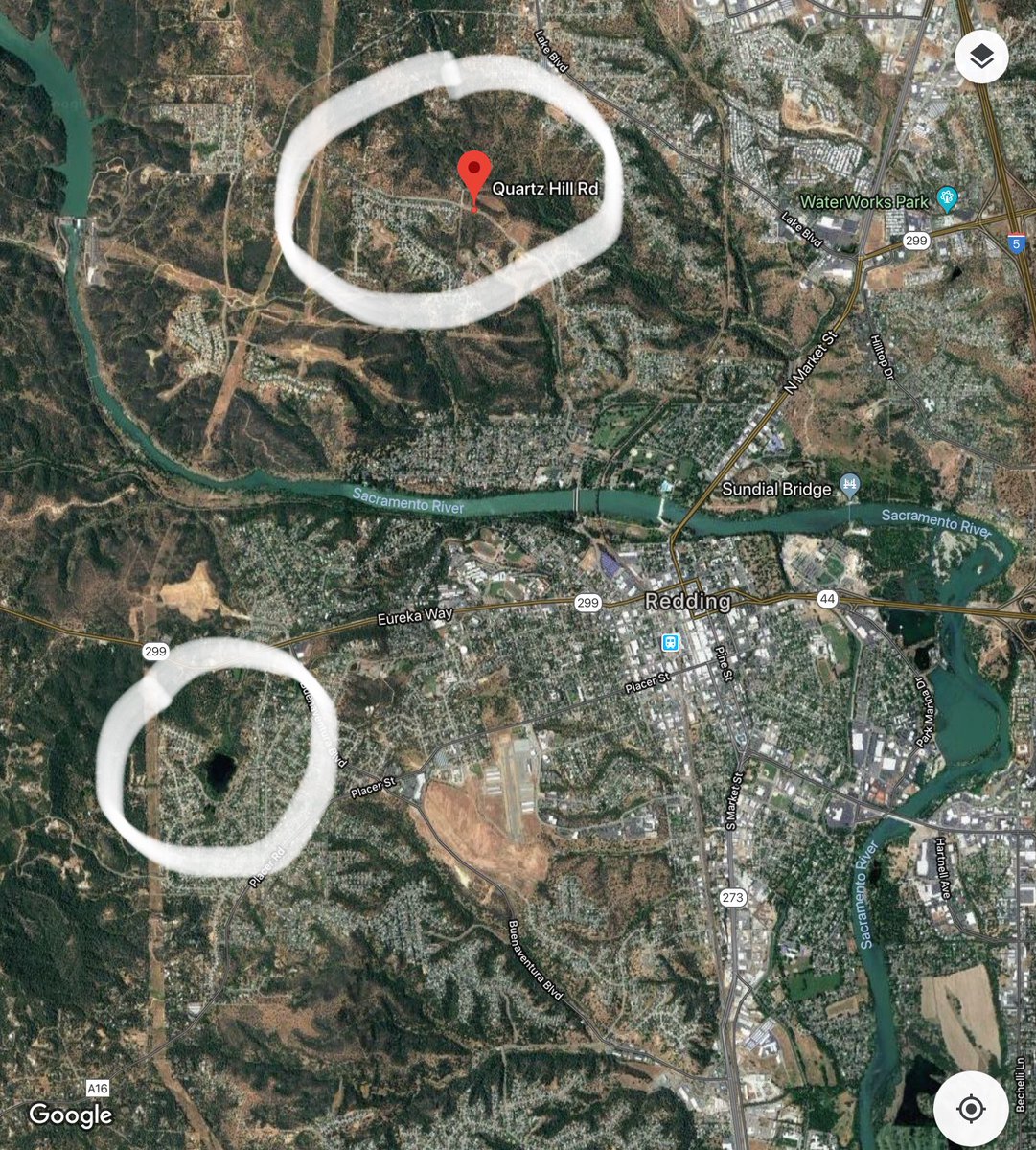 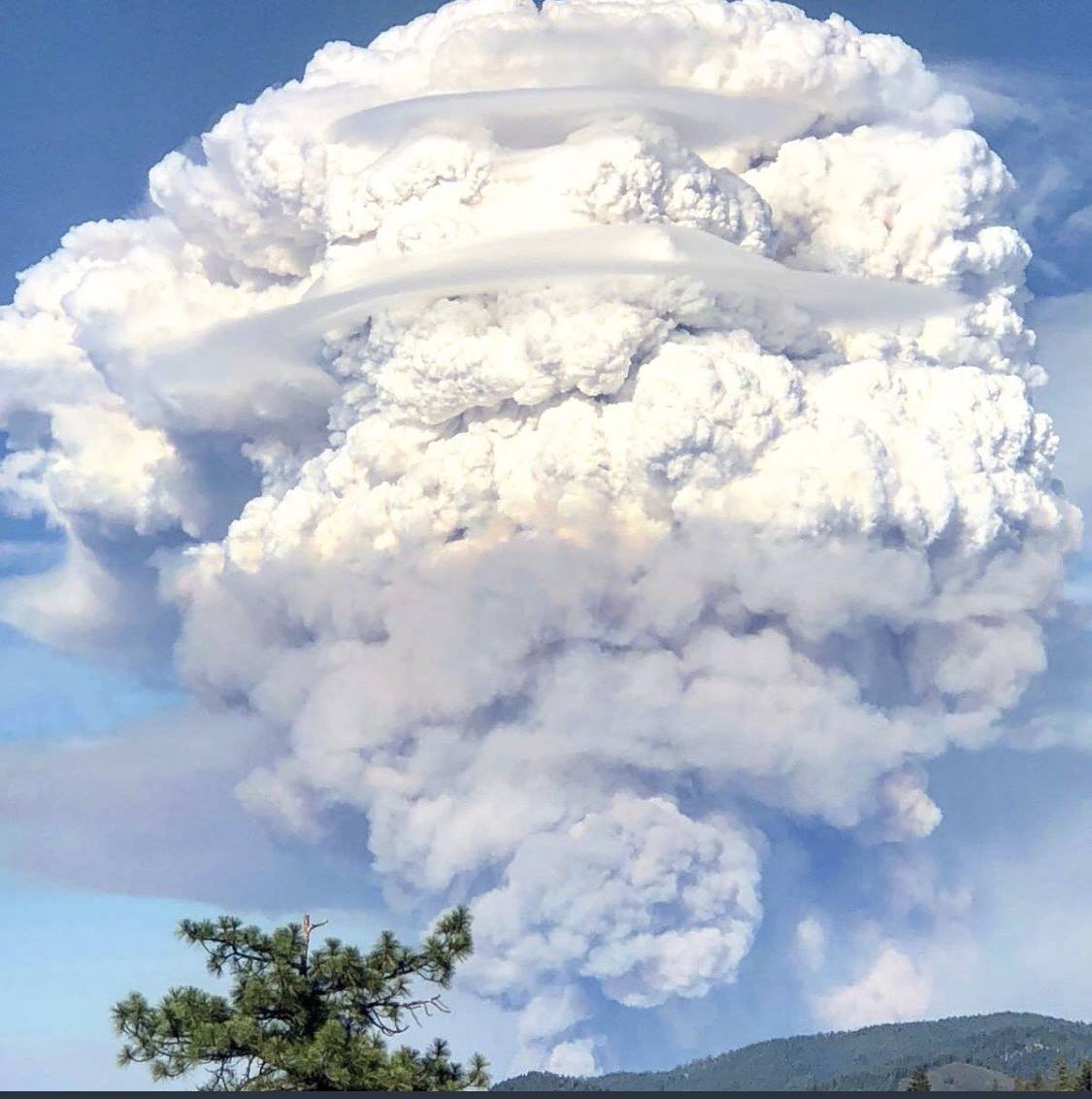 A devastating wildfire near Shasta has exploded to 44,450 acres. Two firefighters were killed and more than 100 homes destroyed. Peter Daut with an update from the CBSLA newsroom followed by Jasmine Viel assessing the damage in Redding. #CarrFire
5:27 PM – 27 Jul 2018

Here is a summary of the radar observed cyclonic circulation within the #CarrFire pyro-plume over #Redding @ 9:45 PDT. Clear couplet of inbound/outbound flow. This radar sweep is about 2 km AGL…surface circulation likely MUCH stronger!  Yikes! #CAwx #CAfire Credit to @WxMattt 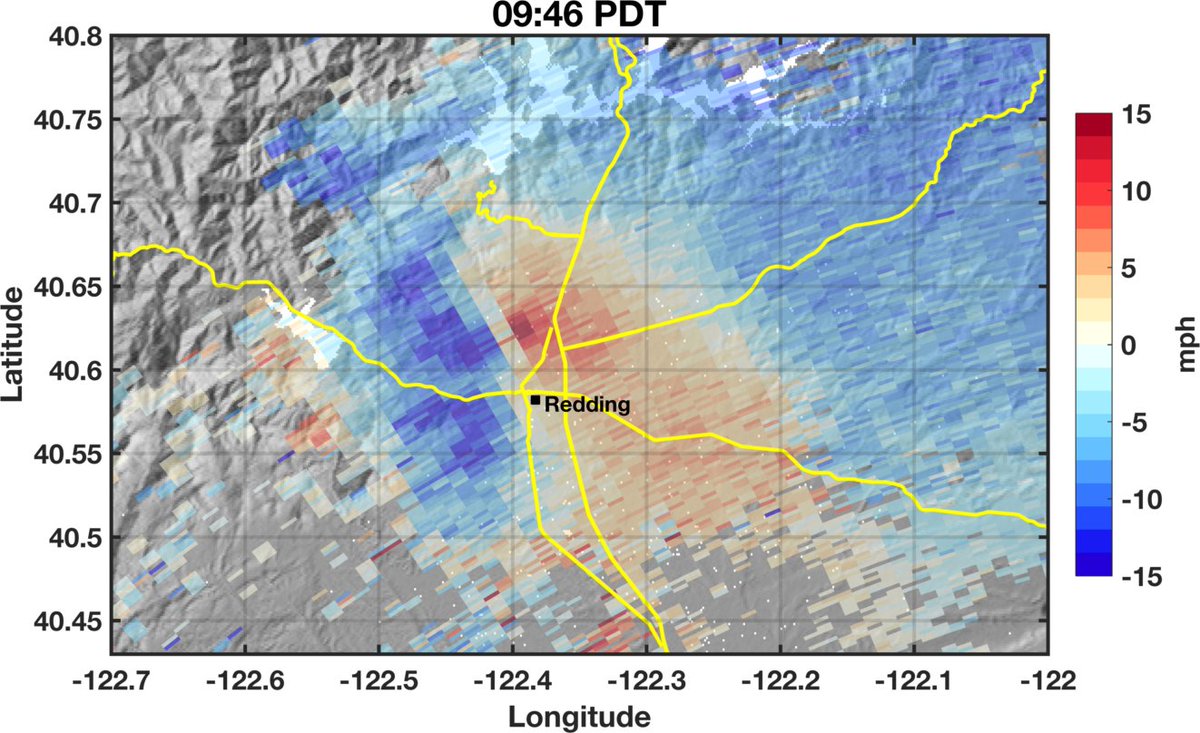 There are 90,000 people that live in Redding. The #CarrFire is now moving freely through the city, with a 100ft wall of flames.
I can’t even begin to imagine. There are no words.

The #CarrFire is absolutely horrifying. It’s just jumped the Sacramento River and now is burning in my hometown. It’s 6% contained. The flames are strong enough that it’s generating it’s own wind and tomorrow is going to be 113 degrees. 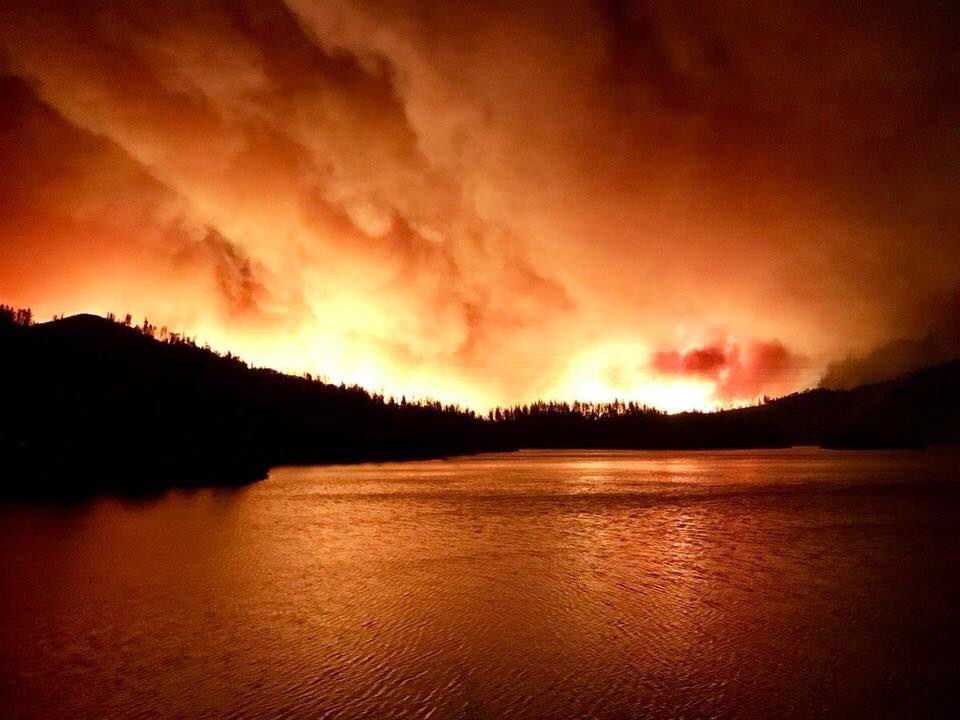 BREAKING: Officials say a firefighter has been killed by a massive Northern California wildfire, raising the death toll to 2.
8:06 AM – 27 Jul 2018 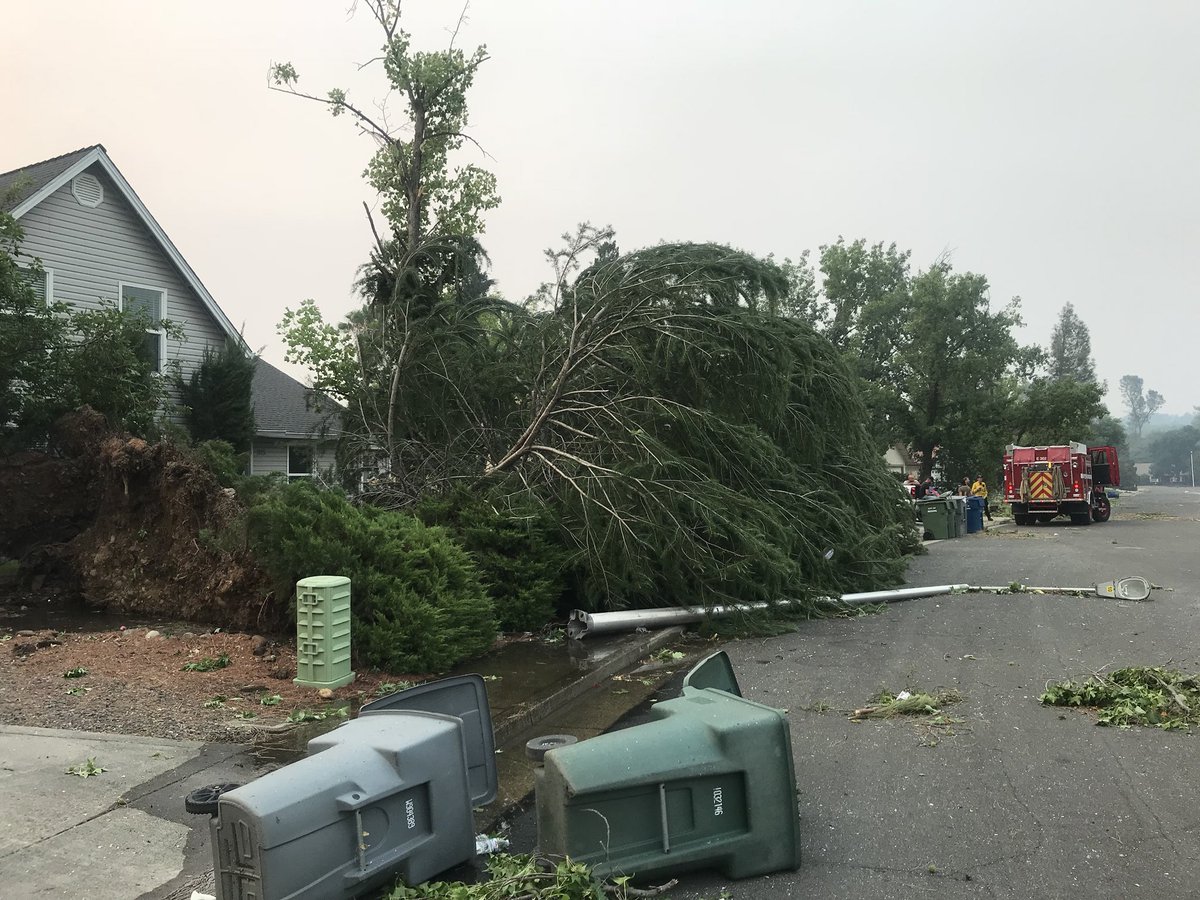 Wilson WalkerVerified account @WilsonKPIX
An indication of what the wind was like late yesterday in Redding. A lot of similar damage around town. #CARRfire
12:15 PM – 27 Jul 2018 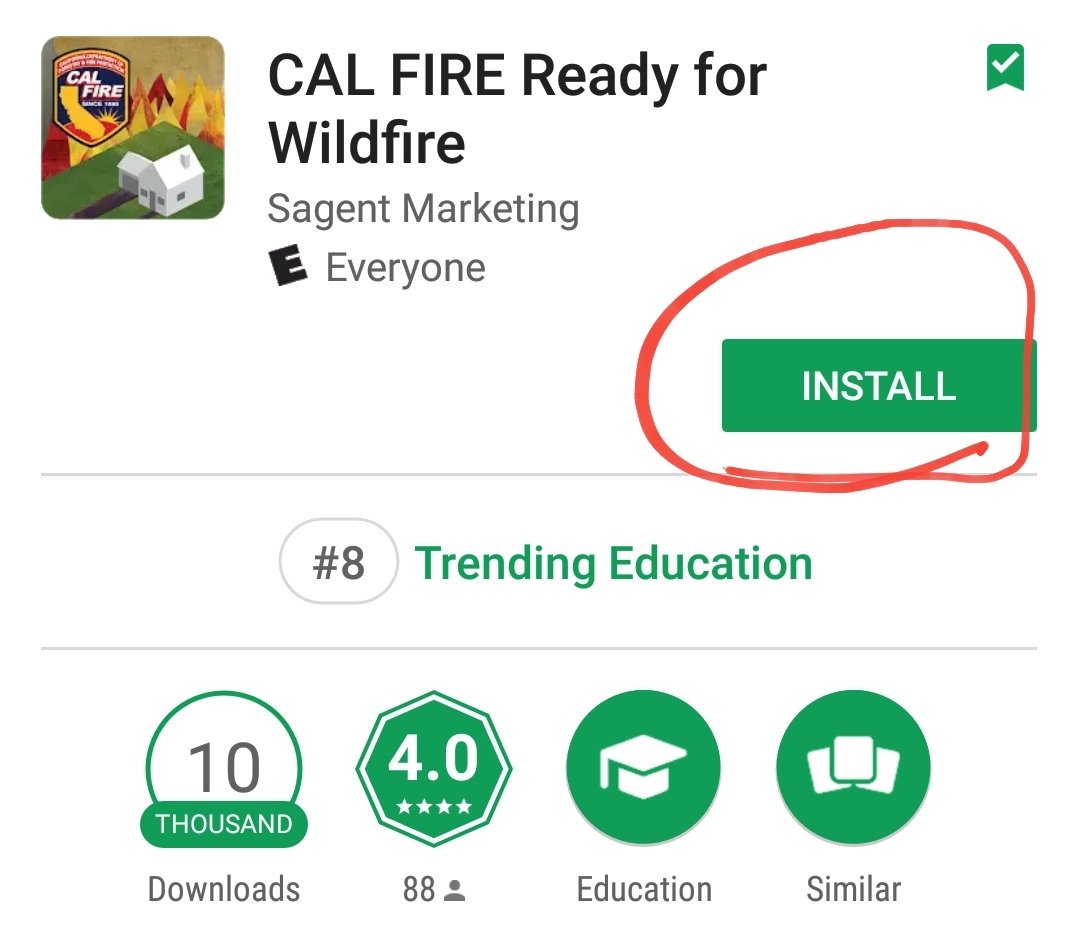 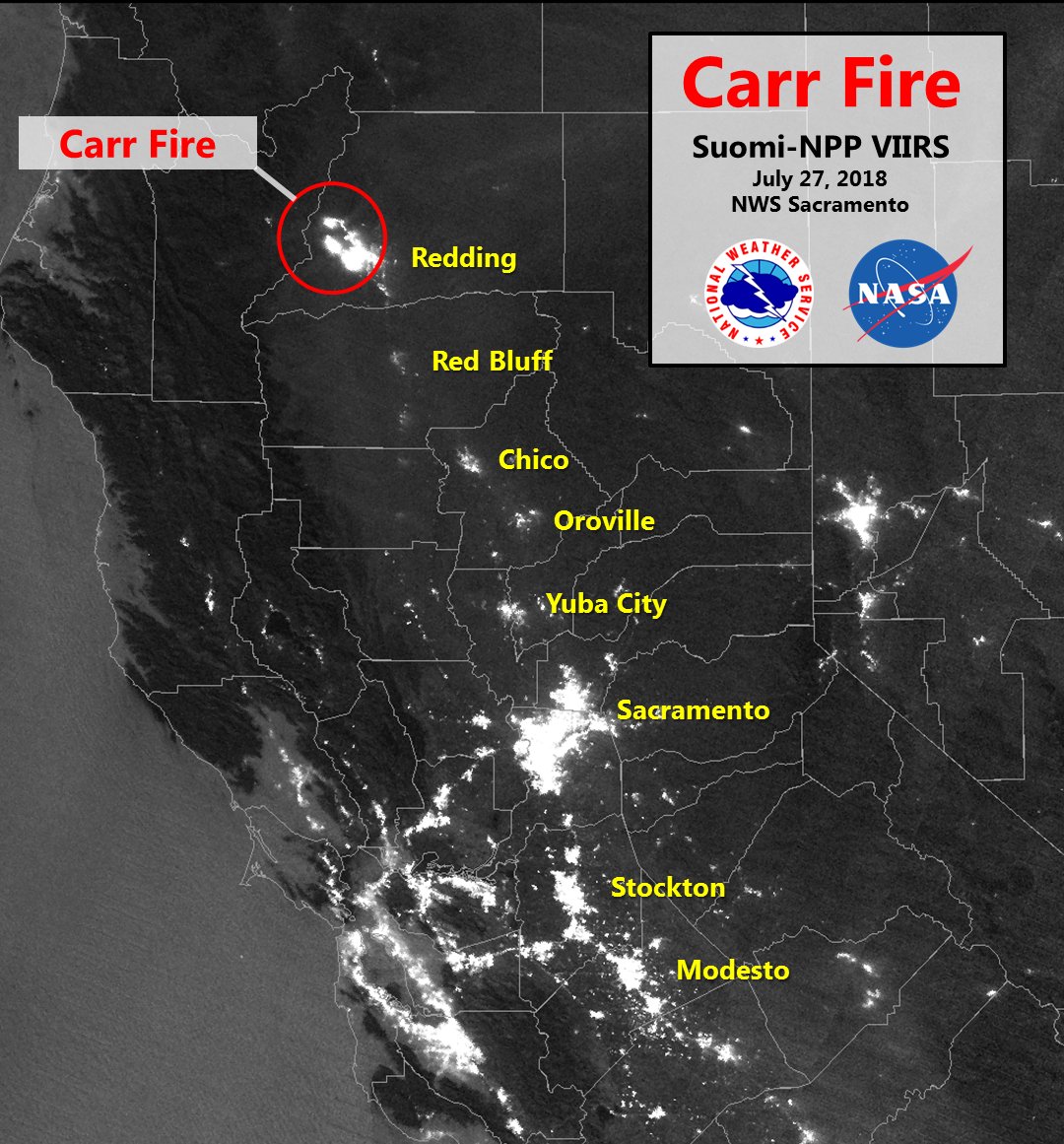 The thing will be strong and oriented such that firefighters won’t get much relief into the early part of next week.
Saturday’s forecast temperatures across the nation won’t be too hard to take except in the West where the current heat wave won’t relent:

Unfortunately Redding will be near 112F…not a good reading at all to help fire fighters.

A raging wildfire in Northern California grew dramatically on Thursday and Friday, killing at least two people battling the blaze, forcing scores of residents from their homes, destroying more than a dozen buildings and threatening thousands more.

“This fire is extremely dangerous and moving with no regard to what’s in its path,” Cal Fire Chief Brett Gouvea said.

The Carr Fire’s growth has been explosive. On Thursday morning, the blaze was burning across 20,000 acres, fire officials said. By Friday morning, it had more than doubled in size, spreading across an area the size of the District of Columbia.

Authorities said 65 structures had been destroyed, 55 more damaged and nearly 5,000 were threatened. Cal Fire said the blaze began Monday afternoon and was caused by “mechanical failure of vehicle,” although the agency did not elaborate.

Remarkable: “Since 2012…there has not been a month without a wildfire burning—a stark contrast to previous decades, when fire officials saw fall & winter as time to plan & regroup.” #CAwx #CAfire
Click on the photo to get the New York Times write up:
4:12 PM – 27 Jul 2018

Melted wheels on a car that burned in the #CarrFire. #ABC10 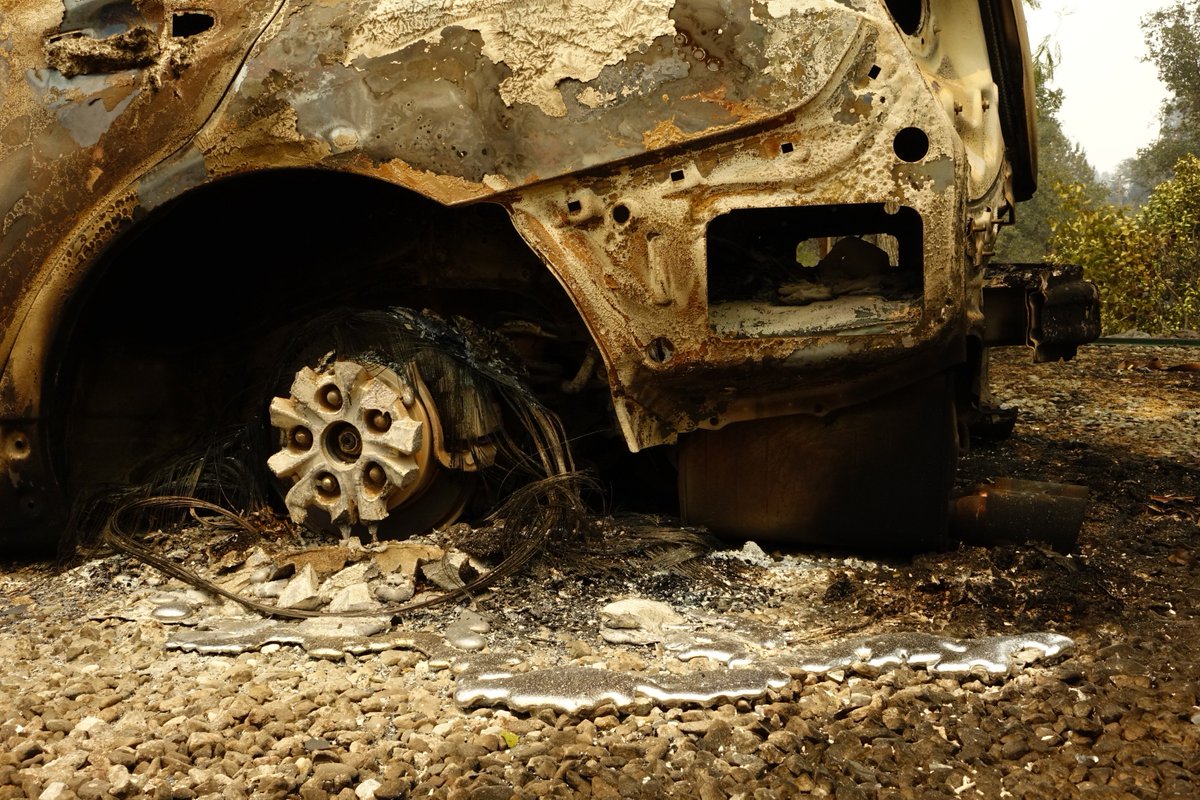 The heat will continue across inland areas through the weekend. Hot and dry weather will bring elevated fire weather concerns. #cawx #laheat #BeatTheHeat 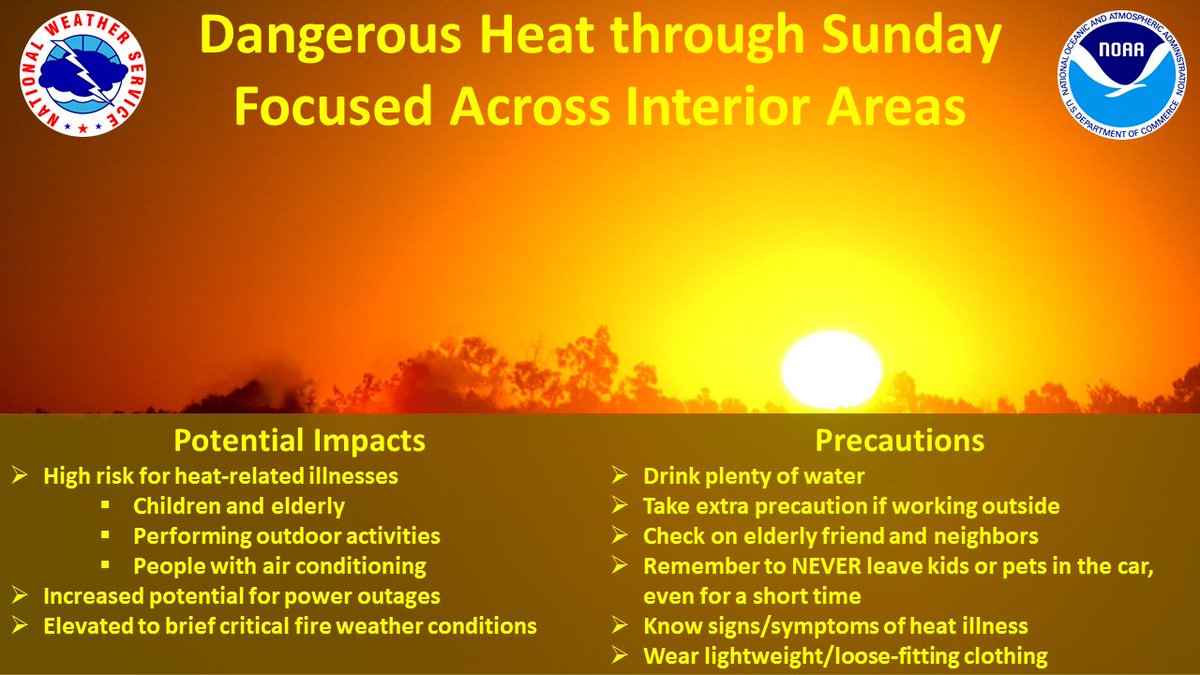 Smoke actually held Red Bluff’s max down to 100F. Maxes were close to record values from Las Vegas south to the L.A. Basin. Maxes were dangerously hot in Texas but only a few degrees above average. The Midwest continued to be the nation’s comfortable spot.