Tuesday August 7th… Dear Diary. The main purpose of this ongoing post will be to track United States extreme or record temperatures related to climate change. Any reports I see of ETs will be listed below the main topic of the day. I’ll refer to extreme or record temperatures as ETs (not extraterrestrials)😊. Here is today’s main climate change post related hot topic:

It pains me to see the direction the United States has gone since 2016 via Trump and his fervent backers. Don’t get me wrong. I love this country and its lofty principles thinking that we can be a world leader, that proverbial shining beacon on a hill again when it comes to dealing with global existential threats. During the 20th century we were successful during World War II vanquishing global fascism, and later when communism was deemed a threat to society, we won the Cold War. Now the rest of the world appears to be moving forward via the Paris Accords leaving the U.S. behind combating the biggest existential threat of the 21st century, global warming. Will the U.S. be left in the leadership dust in the 21st century?

After World War II the U.S. spent much capital to rebuild western Europe in order to keep Russian communism from spreading, humanely helping millions of war weary people. This Marshall Plan gave $13 billion (approximately 130 billion in current dollar value) in economic support to help rebuild Western European economies. The war had absolutely devastated infrastructure from Germany westward through France and Britain. As the Cold War dragged through the 1950s, 60s, 70s and 80s the world saw a distinct, sharp contrast between two economic systems, capitalism and communism. Capitalism quickly rebuilt Western Europe while Eastern Europe stagnated. The real world experiment proved that capitalism, though far from perfect, was the best system during the 20th century to lift and keep people out of poverty, creating a large middle class. Today the existential threat of communism is gone except in two, small pariah countries, North Korea and Cuba.

Will the United States remain the lone climate change pariah state going into the 2020s? Looking at articles being written in the present day based on sound science global warming is much more of an existential threat than communism ever could be. At least people in the old Soviet Union empire could live even if their lives were wrought with poverty and hardship due to shortages of goods and food. Barring a hot nuclear war there was no threat for displacement of large populations and widespread starvation as climate change may impart. Take a look:

Michael E. Mann‏Verified account @MichaelEMann
“The Planet Is Dangerously Close to the Tipping Point for a ‘Hothouse Earth’” by Yasemin Saplakoglu (@yasemin_sap) for @LiveScience:
2:31 PM – 6 Aug 2018
.       My mind keeps hearkening back to a long essay written by Bill McKibben calling for the world to use emergency powers to completely go to renewables for power generation and transportation as if winning another world war depended on it…and it does!
https://newrepublic.com/article/135684/declare-war-climate-change-mobilize-wwii
Most agree in this country that we need an infrastructure overhaul, so why not spend money that we don’t have (and economically we really do) to go totally green as described in Bill’s article?
All across the world the sun, wind and hydrogen are available everywhere on the planet as arsenals to defeat climate change. There should be no more bloody wars to annex oil fields by imperialistic powers, as in recent history.
We need to fight a different kind of war, a World War III against climate change. The United States has a tendency of dragging its feet into necessary world conflict. Perhaps the devastation in Europe would have been much less say if we had nipped Hitler in the bud during the 1930s or right after the invasion of Poland. We did win the war after Hitler declared war on us in December 1941. Now climate change has declared war on us volleying ever stronger salvos our way with names…Harvey, Irma, Maria, the Thomas and Carr Fires…just to name a few from this year and 2017. When we get punched we fight back big time. Just ask Tojo who was hanged for war crimes in 1948. Europe just got punched by a torrid heat wave with Spain and Portugal seeing all time record maxes. Greece had a horrific wildfire. We are late to this conflict, but once more we need to come to Europe’s aid as well as obviously taking care of our own people. And yes, we are largely to blame for this evil which spread throughout the world:

What I’m calling for is the next President of the United States to use emergency powers to bypass Congress during this climate emergency. I’d use this power as defined by Wiki:
The International Emergency Economic Powers Act (IEEPA), Title II of Pub.L. 95–223, 91 Stat.1626, enacted October 28, 1977, is a United States federal law authorizing the President to regulate commerce after declaring a national emergency in response to any unusual and extraordinary threat to the United States which has a foreign source.
Well, the extraordinary threat not only has a foreign source due to carbon emissions but a domestic “spy ring” of brown energy interests as a source also. Unlike the Japanese bombing warships in Pearl Harbor this threat could sink ALL of our coastal cities and most of Florida displacing millions. What is one harbor compared to our entire coast? Even I have a hard time wrapping my head around this threat. So, I’d advise trillions to be spent to replace internal combustion vehicles with Teslas or other totally battery operated transportation systems including those for mass transit. Trillions also need to be spent putting solar panels on all dwellings, connecting wind farms to an ever improving power grid via our best innovative minds. We could lead the new war effort instead of follow during the 2020s just like we did during the 1940s.
When a society needs to go to war money is just paper, and economic number crunching and debt does not matter. We spiked our debt during World War II leading to an economic boom and prosperity in the mid and late 20th century.
.      We need to spike the debt again for the climate war demanding green change just like our forefathers had Ford and other companies churn out tanks and planes instead of cars to defeat Hitler and Tojo. This war unlike WWII doesn’t have to end with mass casualties if we start now before it’s too late.

“We are at risk of crossing a Planetary Tipping Point already at 2 C taking us toward #HothouseEarth” ~@jrockstrom Let’s avoid it.

Time to act like responsible adults. Time to tell the truth. No panic necessary—just unwavering determination to do the right thing and change the course of history for the better.
9:22 AM – 7 Aug 2018
………………………………………………………………………………………….
Wednesday a front will end hot conditions above 90F in the Midwest and Northeast. Our heat wave will continue raging in the Southwest and get more intense in the Northwest:

Heat advisories were added to a few locations in the Southeast for today:

“In California, Firefighters Battle Largest Fire in State History” by @JennyMedina and @SMervosh via @NYTimes:

This image gives you an idea of the smoke/air quality problems Californians are facing from the massive fires, via @NASAEarth 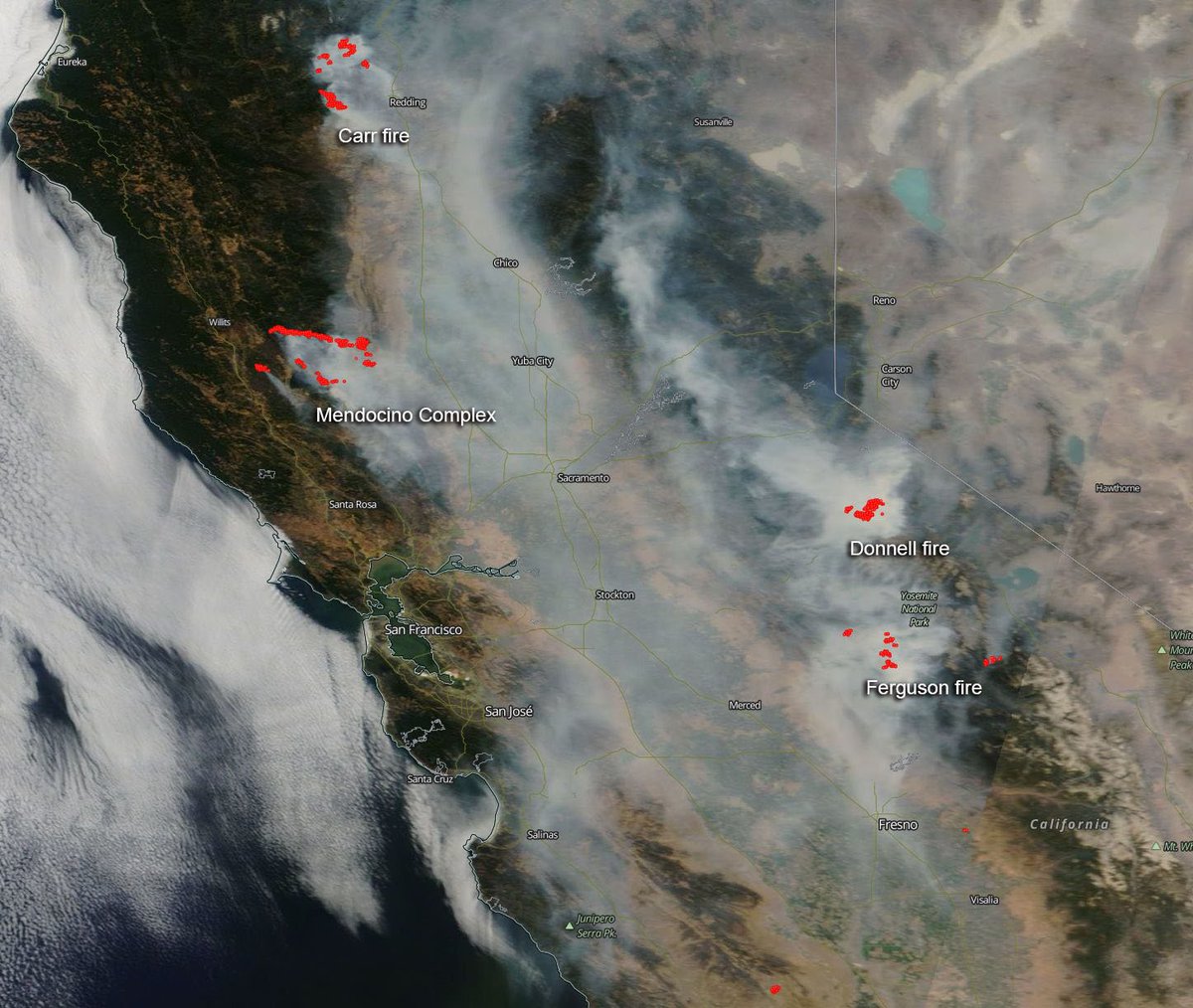 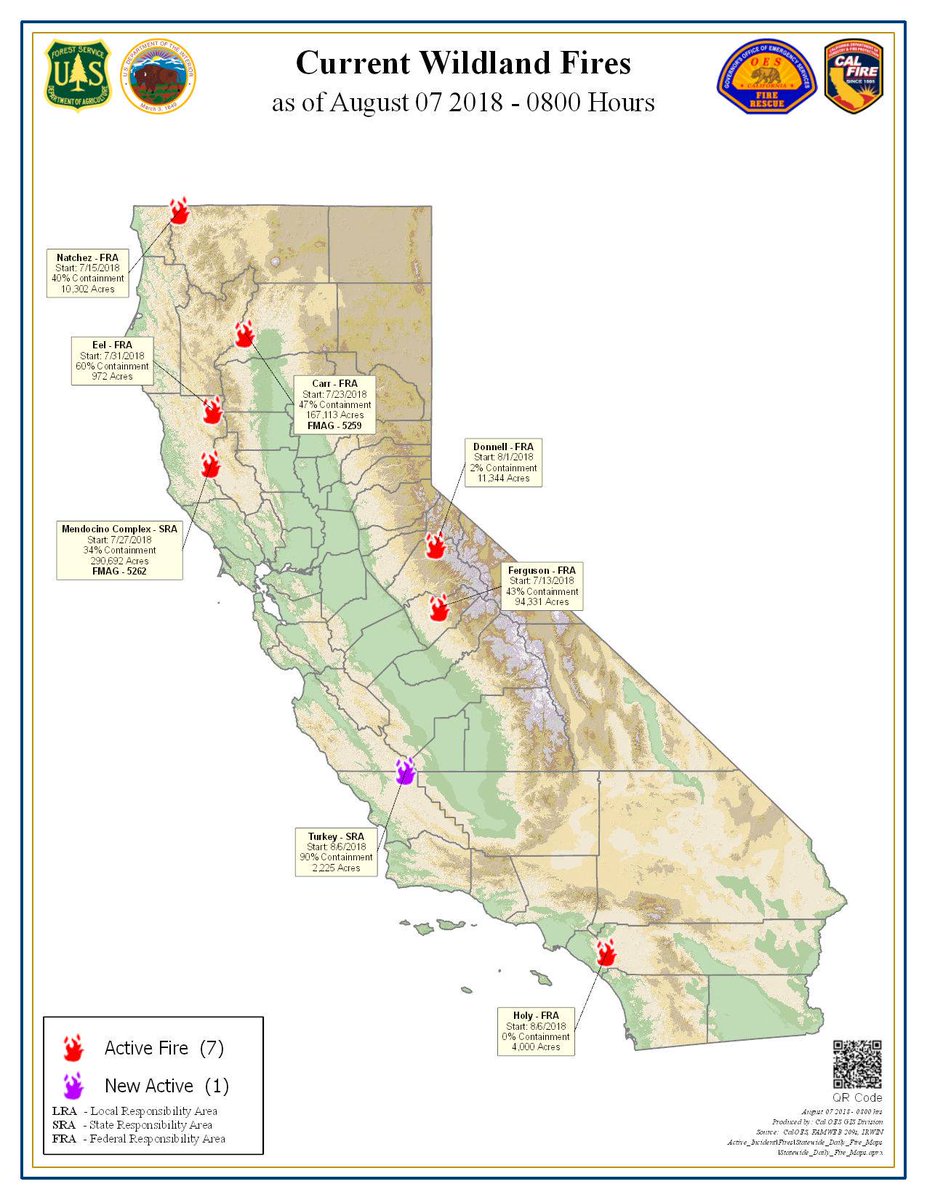 The growth of wind and solar in certain areas—from California to Germany and Australia—has meant that the amount of electricity being generated is outstripping demand at times, pushing wholesale prices to zero or even below. https://bloom.bg/2APwSqN  via @business @JesperStarn
10:31 AM – 7 Aug 2018
Here are reports of ETs I have seen so far today:

The only area of record heat was in and near San Diego. Hot conditions still hampered fire fighting efforts in California. It was a hot, humid day up and down the East Coast as well as the South. The Midwest continues to see pleasant temperatures.