For the last week all of my main topics for each day have centered on the many facets of the current “global heatwave,” anything from European record heat to California’s fires. Let’s take a break from climate change effects and focus on one solution. Today I will list Monday’s news from heat events below today’s topic, which deals with educating women in order to hold in check population, and thus climate change. This is a sticky subject for me being a man, so drop me a note to scold me if my points don’t make sense or if I have made an omission. Also, the subject of population control is fraught with controversy itself. Nonetheless, I feel that some toes need to be stepped on.

Speaking of that, obviously the more people on the planet the more individual small to large carbon footprints. I wrote about global population in an earlier piece here:

Quoting myself from the first two paragraphs:

If there ever was one subject ranked numero uno on the taboo list of what not to write about in association with climate change this is it. In the world of politics some pundits won’t touch abortion, which is part of the issue of overpopulation. When does human life really begin…when sperm meets egg, or later? I’m not going to get into a discussion about the morality or immorality of abortion, just suffice it to say that I believe that when a child is brought into this world it should have the best environmental, parental, and social structure possible throughout the duration of its life. That being written sometime in the not too distant future children are going to be suffering the ravages of what is now preventable climate change, if they haven’t already in countries like Syria, should carbon emissions continue unabated.

So today I’m going to state a very inconvenient fact. The more people on the planet the worse climate change will be. Each of us is responsible for using resources through the course of our lives requiring energy, which up to this point in history has mostly been generated by fossil fuels. The key to sustainability is generating enough green energy for a given, finite number of people on planet Earth, whether it be just a few million or well more than 10 billion. That’s not to write that we should get rid of several billion people all at once, heaven forbid, just that through education and some tweaking of social mores the Earths population can either stabilize or slowly go down.

The last paragraph segues into today’s discussion about women’s education. Study after study has determined that the higher a woman’s education level the smaller families become. Ideally the number of offspring to slowly bring the world’s population down per family unit would be one to two, but I contend that families should retain the freedom to set that number. After both husband and wife understand finances for raising each child usually family units are small. If not poverty usually is an end result. Countries with levels of higher education, and specifically sex education, such as in Europe or Japan, have seen their populations stabilize or decrease. India and countries in Africa are just now getting enough education to grapple with exploding population. Let me make reference to a couple of articles dealing with this issue.

Quoting points from this article:

1. Promote girls’ reproductive rights in order to ensure equitable climate action. The first platform is centered on enhancing girls’ and women’s reproductive health and rights, an argument that pushes current discussions on “female education,” women’s fertility, and population growth to consider how the underlying lever of change is education’s impact on girls’ and women’s control over their reproductive lives. Making the connection to female rights and agency has important implications not only for providing girls and women the opportunities to develop their own human, social, and political capital, but also for ensuring more equitable climate action.

2. Invest in girls’ education in order to foster climate participation and leadership. The second platform draws attention to the role that women in leadership and decisionmaking have in increasing the diversity of experiences and perspectives shaping climate change problem identification and policy solutions. This case points to the critical importance of education, both in formal and informal spaces, in setting girls up to take on leadership roles later in life.

3. Develop girls’ life skills for a green economy. The third platform focuses on increasing girls’ and women’s skills for a green economy, and how an investment in girls’ quality education—one that builds the breadth of skills needed not only for a changing world but also for transforming a girl’s world—can be the key to ensuring that girls and women fully participate in sustainable development and have equal opportunity to drive and benefit from greener innovations in the 21st century.

Here is another article reinforcing the last three points:

“Education lays a foundation for vibrant lives for girls and women, their families, and their communities. It also is one of the most powerful levers available for avoiding emissions by curbing population growth. Women with more years of education have fewer and healthier children, and actively manage their reproductive health.”

This excellent NPR article indicates that today’s parents are having to make grave decisions due to the climate crisis, which I’d suggest all to read in full: https://www.npr.org/2016/08/18/479349760/should-we-be-having-kids-in-the-age-of-climate-change

“Back at James Madison University, Travis Rieder explains a PowerPoint graph that seems to offer hope. Bringing down global fertility by just half a child per woman “could be the thing that saves us,” he says.

He cites a study from 2010 that looked at the impact of demographic change on global carbon emissions. It found that slowing population growth could eliminate one-fifth to one-quarter of all the carbon emissions that need to be cut by midcentury to avoid that potentially catastrophic tipping point.”

For yet another take on this issue read this new article from VOX written in July of this year: https://www.vox.com/energy-and-environment/2017/9/26/16356524/the-population-question

To sum up today’s topic here is the main point of this article:

Unfortunately, the cheapest, most cost-effective mechanism for reducing emissions does not seem to have been considered by the international community. It is education, or more specifically girls’ education, that is far more likely to result in lower carbon emissions than a shift to renewables, improved agricultural practices, urban public transport, or any other strategy now being contemplated.

Tomorrow, as has been the case for much of this summer in the U.S. extreme heat will build in California. Typical August heat will persist in the Northeast and South:

Dozens of locations in Portugal and Spain just saw their hottest temperatures ever recorded, as Europe’s 2018 heat & wildfires continue https://bit.ly/2OgHilo 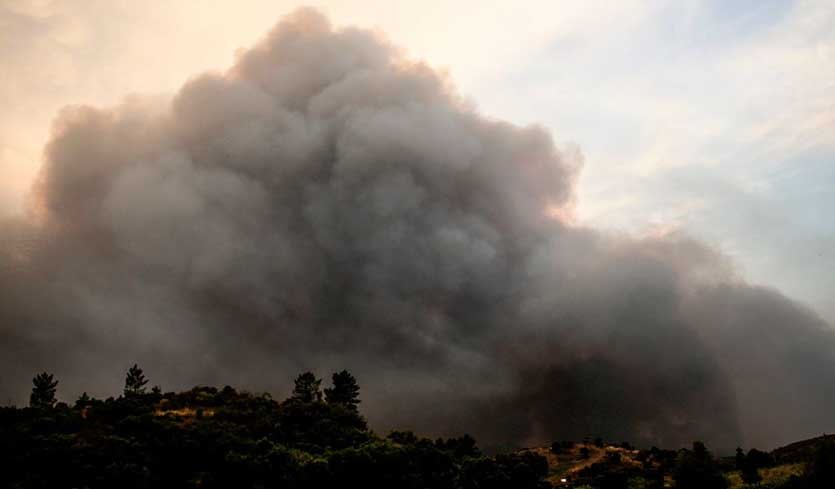 “We have plenty of water to fight these wildfires, but let’s be clear: It’s our changing climate that is leading to more severe and destructive fires,” said Daniel Berlant, assistant deputy director of Cal Fire, the state’s fire agency.
(Click on the picture to see the NY Times article.)
1:50 PM – 6 Aug 2018

My sadness and rage about climate-change linked wildfire smoke trapping my kids indoors all summer has made it to the @guardian.
9:57 AM – 6 Aug 2018 from Washington, USA

It is likely that the #RanchFire by itself will eventually become the largest single #wildfire in California history–perhaps within the next few days . Extreme fire behavior and rates of spread still being observed over ~50 miles of open fire line. #CAfire #MendocinoComplex 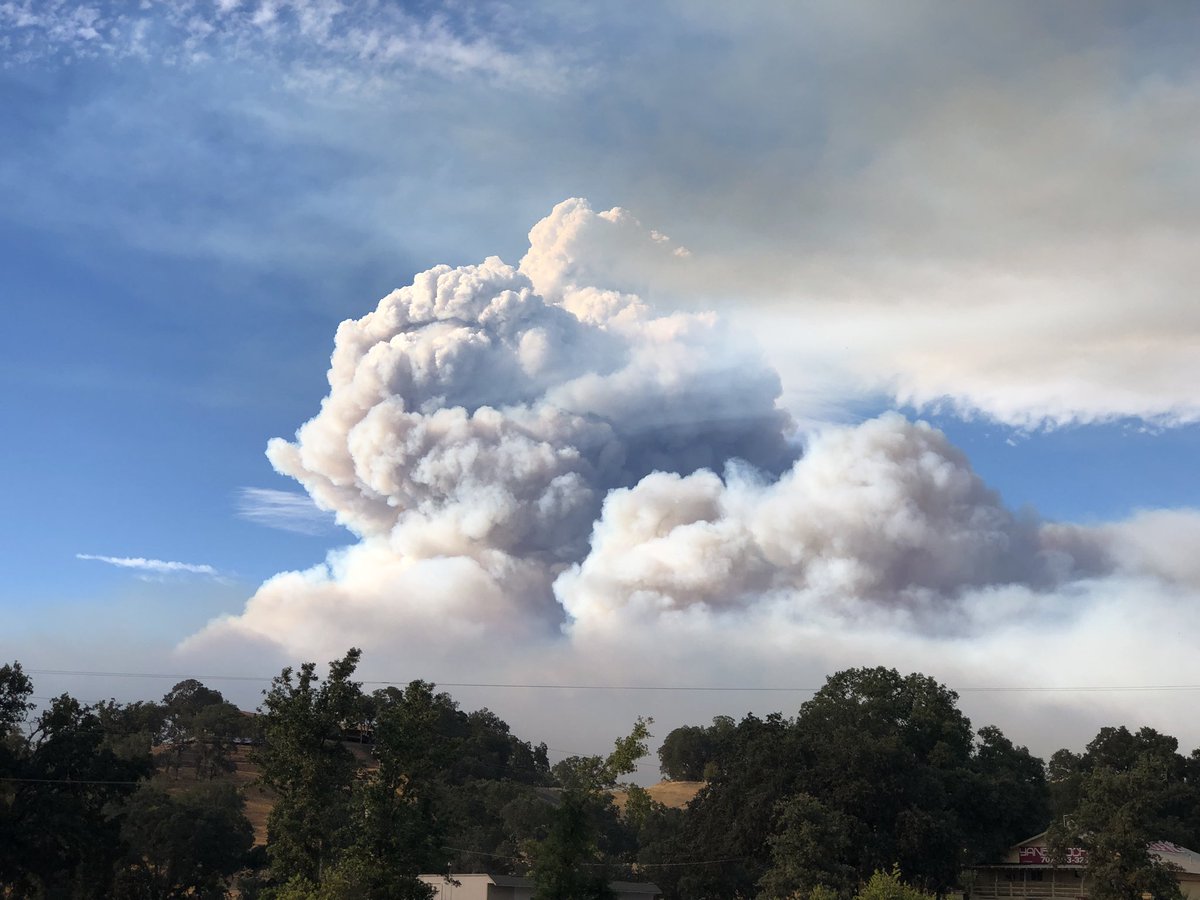 Mike McGuireVerified account @ilike_mike
Unfortunately, it’s official: The two #MendicinoComplex Fires have become the largest fire event in CA history. A total of 283,800 acres have been scorched between the #RanchFire & the #RiverFire. Containment is building on the #RiverFire, the #RanchFire has been a big challenge.…
7:46 PM – 6 Aug 2018

Record heat is spreading westward from Arizona into California. Marginally dangerous heat developed from the Plains through the mid-Mississippi Valley unto the Ohio Valley into the Northeast. Above average heat persisted from Texas through the Southeast.