Thursday August 9th… Dear Diary. The main purpose of this ongoing post will be to track United States extreme or record temperatures related to climate change. Any reports I see of ETs will be listed below the main topic of the day. I’ll refer to extreme or record temperatures as ETs (not extraterrestrials)😊. Here is today’s main climate change related topic:

All keeping tabs on the climate issue were quite alarmed but yet intrigued upon seeing this item this week:

Michael E. Mann‏Verified account @MichaelEMann
“The Planet Is Dangerously Close to the Tipping Point for a ‘Hothouse Earth’” by Yasemin Saplakoglu (@yasemin_sap) for @LiveScience: (Click on the picture to see the article.)
2:31 PM – 6 Aug 2018
Since 1988 and in this Hothouse Earth article I have often heard the term “tipping point” being bandied about. We know what this somewhat nebulous term means, the point in time when natural cooling factors for our planet become warming factors, spiking temperatures of the Earth and raising sea levels, changing the climate such that it would be extremely difficult on us poor humans in the future. Just what are these various tipping points, and when might they become negative factors? Let me attempt to answer the last big sentence containing the biggest two climate questions of our day.
This post would be extremely lengthy to go into detail on them all, so rather let’s look at each tipping point factor individually starting with some of the most obvious then ending with some in question, which are just now getting some scientific scrutiny. I’ll address one subject per day in a series of subsequent posts for as long as we can think of adding each tipping point factor to a long list, hoping to educate all for future reference the next time more doom and gloom climate articles get published. Here is a global picture of most tipping point factors:

First, let’s look at the Greenland ice sheet. We know that this is in grave danger from scientists studying the thing and photographers visually documenting glacial retreat showing great chunks of melting ice. Yet, some think that if somehow the world’s global average temperature were to stabilize where it is now, around +1.0C above preindustrial conditions, the ice sheet would be spared…or would it?
Has the Greenland ice sheet already reached a tipping point such that over the coming decades the thing will eventually melt, raising seas 20 feet?  Has enough of Greenland’s land already been exposed such that the albedo of that darker surface and surrounding open water due to decreasing Arctic sea ice absorbs enough incoming solar radiation to produce a cascade effect, melting all ice on that large island? For these questions let me turn to this article from last year:
https://www.huffingtonpost.com/entry/greenland-coastal-ice-caps-melting_us_58e5f007e4b0fe4ce08840b1
Quoting from the Huffington Post article:
In a study published in Nature Communications, scientists based in Europe and the U.S. describe how the glaciers and ice caps that cover tens of thousands of square miles along the coast of Greenland have reached a critical “tipping point,” beyond which further melting is unavoidable. Troublingly, the ice had already surpassed this tipping point 20 years ago, the researchers said — only the technology to confirm this hadn’t existed until now.
“These peripheral glaciers and ice caps can be thought of as colonies of ice that are in rapid decline, many of which will likely disappear in the near future,” said Ian Howat, study co-author and glaciologist at Ohio State University, in a statement last week. “In that sense, you could say that they’re ‘doomed.’”
The complete melting of Greenland’s coastal ice could raise global sea levels by about 1.5 inches, researchers said. It’s an increase that could impact some islands and low-lying coastal areas through flooding, erosion and other effects. But according to the study’s authors, there’s much more at stake than even that.
“The [1.5 inch figure] does not sound like much,” lead author Brice Noël told The Huffington Post on Thursday from Utrecht University in The Netherlands, where he’s a doctoral researcher. “But these ice caps are an alarm signal of what will happen on the Greenland ice sheet if temperatures continue to increase.”
The Greenland ice sheet, which covers about 80 percent of the island’s surface, is the second-largest ice body in the world after the Antarctic ice sheet. The same processes that have caused the accelerated melting of Greenland’s coastal ice bodies could also influence the island’s massive ice sheet — with devastating results, Noël said. “For now, the ice sheet is still safe,” he said. “Its tipping point hasn’t been crossed yet. But if warming continues, it’s very likely that it will be crossed.”
If the entire Greenland ice sheet were to melt, it would cause a global sea level rise of more than 20 feet.
So I think we have an answer. Yes the outer edges of Greenland have reached a point of no return, but the great interior bulk is probably stable. There still should be time to prevent world wide devastating sea level rise provided that nation’s act and act now. I’ll continue to add items to this Greenland post as they come to my attention.

Next big NH city on the heat parade: #Calgary is predicted on Friday to match its all-time high of 97F (36.1C), first set in 1919. Avg high is 73F. “Widespread smoke” is in the forecast too https://weather.gc.ca/city/pages/ab-52_metric_e.html …
7:20 AM – 9 Aug 2018
It’s not often that you see heat and fire advisories for practically the entire typically cool state of Montana:

California just had the hottest month in its weather history, and Death Valley nabbed an unappealing grand prize: hottest month on Earth https://bit.ly/2M7bRgu 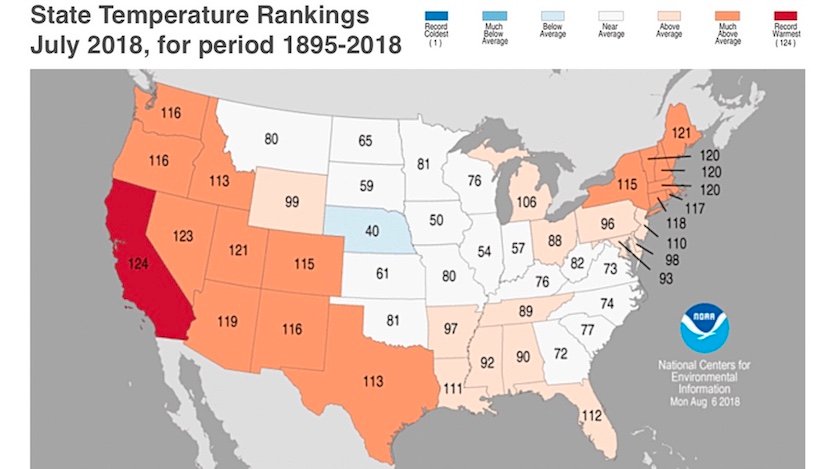 Baker City, Oregon reached 108°F this afternoon, the hottest temperature on record. This breaks the old record of 106°F set on Aug 4, 1961. The low temperature there was 50°F this morning. #orwx

Heat in the west expanding north into Canada (105F into British Columbia). 111F in Lewiston, Idaho. Laredo, by comparison, was 103F on our NWS coop thermometer. 100F heat spilled east into northeast Montana as well. #MYKGNSNEWS 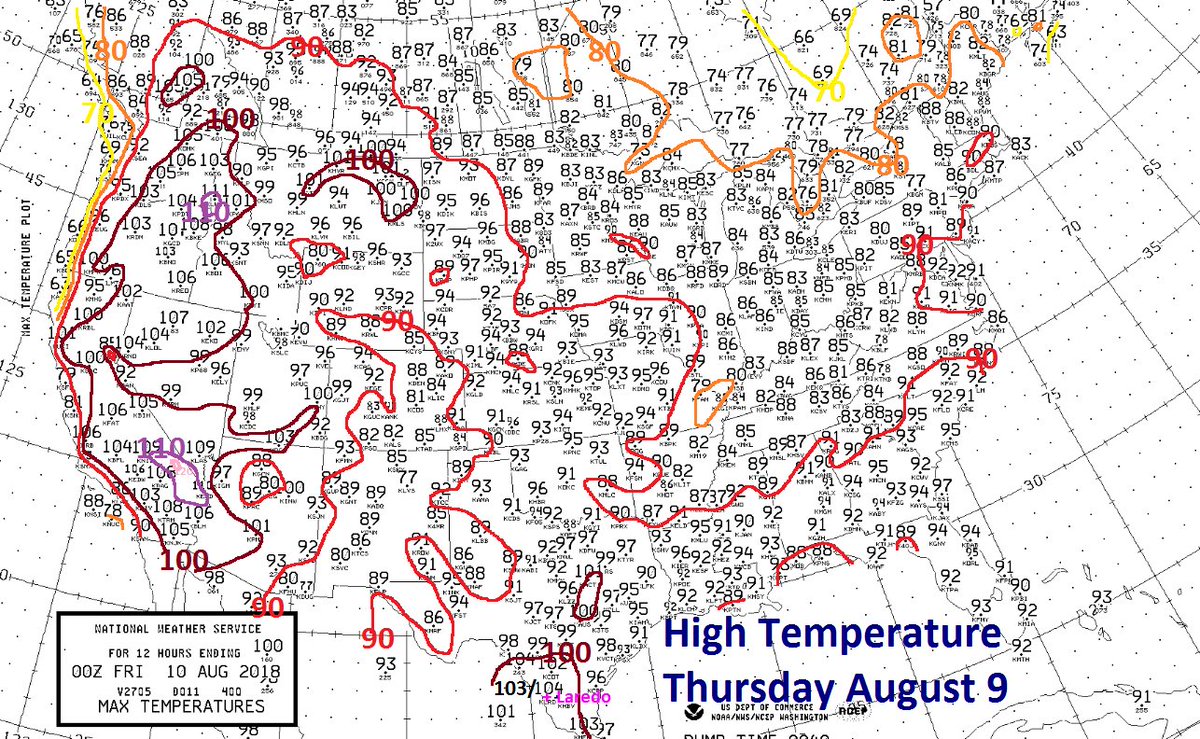