Friday August 10th… Dear Diary. The main purpose of this ongoing post will be to track United States extreme or record temperatures related to climate change. Any reports I see of ETs will be listed below the main topic of the day. I’ll refer to extreme or record temperatures as ETs (not extraterrestrials)😊. Here is today’s main climate change related topic:

Yesterday I started a series of posts briefly discussing natural tipping point factors, which are those that could be crossing a threshold from being cool to adding more heat to Earth’s overall climate regulating system. Yesterday we touched on the Greenland ice sheets from the following chart:

Today let’s explore how boreal forests both are carbon sinks and help cool large areas of the planet.

First boreal forests are the earth’s most common and overall largest land-based biomass as defined and quoted by:  https://www.safeopedia.com/definition/2435/boreal-forest “Boreal forests are also known as taiga, a Russian word which simply means swampy, moist forest. Boreal forests are coniferous and contain large numbers of evergreen trees. This biomass plays a large role in the conditions of our earth’s climate. Boreal forest or taiga covers around 17% of the earth’s terrestrial area and, therefore, is greatly effected by climate change and also has great influence on climate change. Boreal forests play a huge role in intercepting and absorbing solar radiation and converting it to heat. One example of the impact of boreal forests on global warming includes what happens when these forests start to replace frozen areas of the planet and increase heat further.”

We’ve all seen majestic vistas of boreal forests made up of millions of evergreen trees from Siberia to Alaska into northern Canada. Unfortunately just like the Greenland ice sheets these natural air conditioners are under assault from added heat and drought from carbon pollution. The sub-Arctic is warming and changing so fast that boreal forests are having a hard time surviving.

We all know that planting trees is one of the best way to fight and mitigate climate change beyond changing to all green energy and transportation systems. Trees take in carbon, and once they die some gets buried underground. To the north where most people don’t live exactly when would  boreal forests get so stressed that their absence would tip towards warming the planet?  Here is a 2015 article which should help answer this question:

Reposting and quoting most of this article:

Management of boreal forests needs greater attention from international policy, argued forestry experts from IIASA, Natural Resources Canada, and the University of Helsinki in Finland in a new article published this week in the journal Science. The article, which reviews recent research in the field, is part of a special issue on forests released in advance of the World Forestry Congress in September.

“Boreal forests have the potential to hit a tipping point this century,” says IIASA Ecosystems Services and Management Program researcher Anatoly Shvidenko. “It is urgent that we place more focus on climate mitigation and adaptation with respect to these forests, and also take a more integrated and balanced view of forests around the world.”

Boreal forests, which sprawl across the northernmost regions of Canada, Russia, Alaska, and Scandinavia, make up about 30% of total forest area on the planet. They play a vital role in the Earth’s climate system by sequestering carbon dioxide from the atmosphere.  They are home to a plethora of plants and animals. And they provide resources including substantial amounts of wood for lumber and biofuel production, as well as economic and resource opportunities for local and indigenous people. At the same time, boreal forests are one of the ecosystems most affected by climate change, with temperatures in the arctic and boreal domains recently warming at rates as high as 0.5°C per decade, and potential future warming of 6 to 11°C over vast northern regions by 2100, according to the IPCC’s most pessimistic scenario, RCP 8.5.

Studies have shown that climate zones in boreal forests are moving northwards ten times faster than the trees’ ability to migrate. Warmer and drier conditions and enhanced variability of climate may have already contributed to increased extent of wildfires, and the spread of outbreaks of dangerous insects. Thawing permafrost poses threats to the hydrological system at the continental scale, as well as the potential of releasing huge amounts of CO2 and methane. Locally, increasing non-forestry industrial developmentaccompanied by air pollution, soil and water contamination, might reinforce the negative impacts of climate change. Overall, these factors mean that huge areas of boreal forest will be at high risk of impoverishment or change to grassland or shrubland.

“These forests evolved under cold conditions, and we do not know enough about the impacts of warming on their resilience and buffering capacity,” says Shvidenko.

Here is a brand new article published today on boreal forests in Quebec that I invite all to read:

Since 2015 the Arctic and sub-Arctic where boreal forests reside has seen eye popping warmth. In summary, it’s this writer’s gut feeling based on scientific observation that boreal forests have crossed that “tipping point” such that most won’t survive above +1.5C above preindustrial conditions. This post still doesn’t quantify an estimate of how much planetary carbon boreal forests sink, taking away certain parts per million of CO2 from the atmospheric mix. Perhaps not enough science has been done for a good estimation. O.K. climate people. Present me with more evidence to the contrary or that which supports my assessment on boreal forests, and I’ll post it here.

On Saturday the heat wave in the Pacific Northwest will break:

Ahead of a front near record heat will persist in Montana and spread into the Dakotas. Hot temperatures will continue to hamper California’s wildfire fighting.

About time, @nytimes. Better late than never. Now please continue that level of coverage, and please stop giving the climate-change-denying @BretStephensNYT his platform. How about a climate scientist instead? This is way too important to mess up. 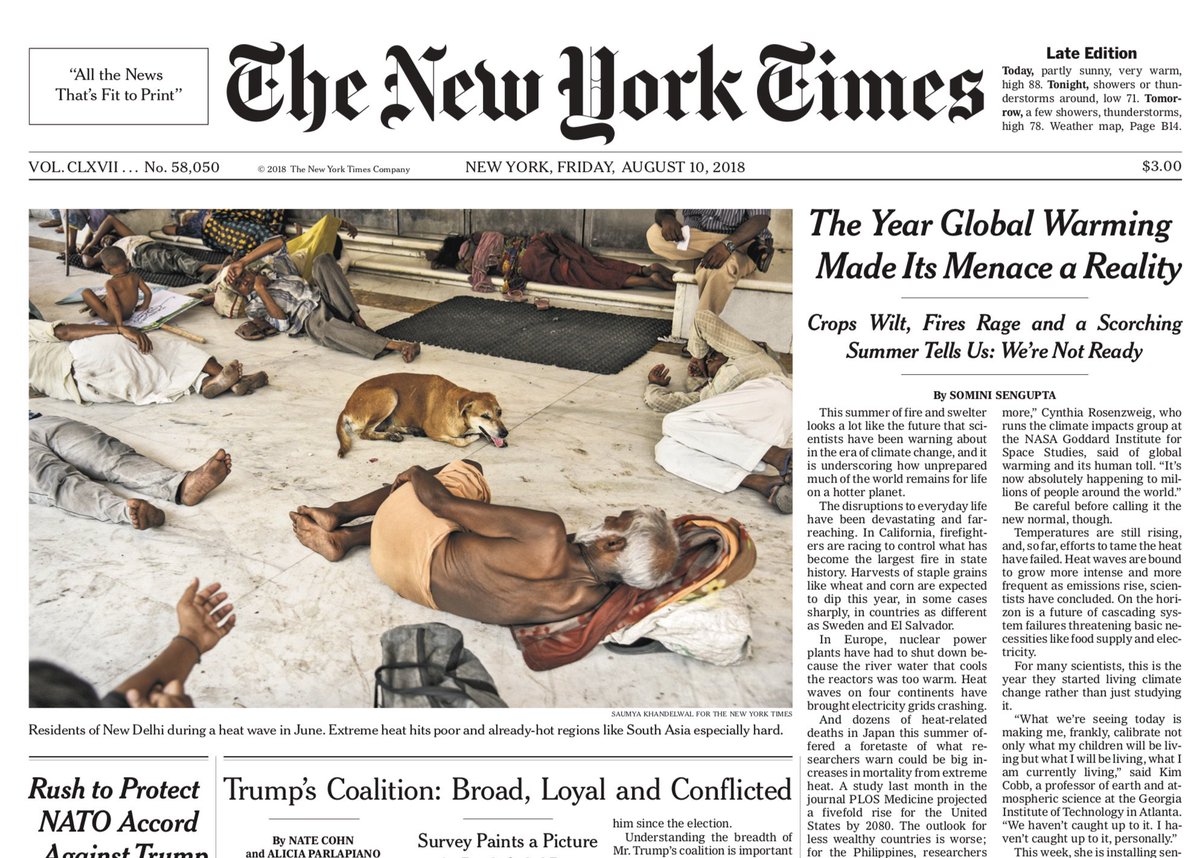 NYT Climate@nytclimate
Today’s lead story in the NYT print edition:
“The Year Global Warming Made Its Menace a Reality”
http://nyti.ms/2MaUwTp
11:33 AM – 10 Aug 2018

These are all the current active fires in California. The latest updates: https://lat.ms/2MebT5q 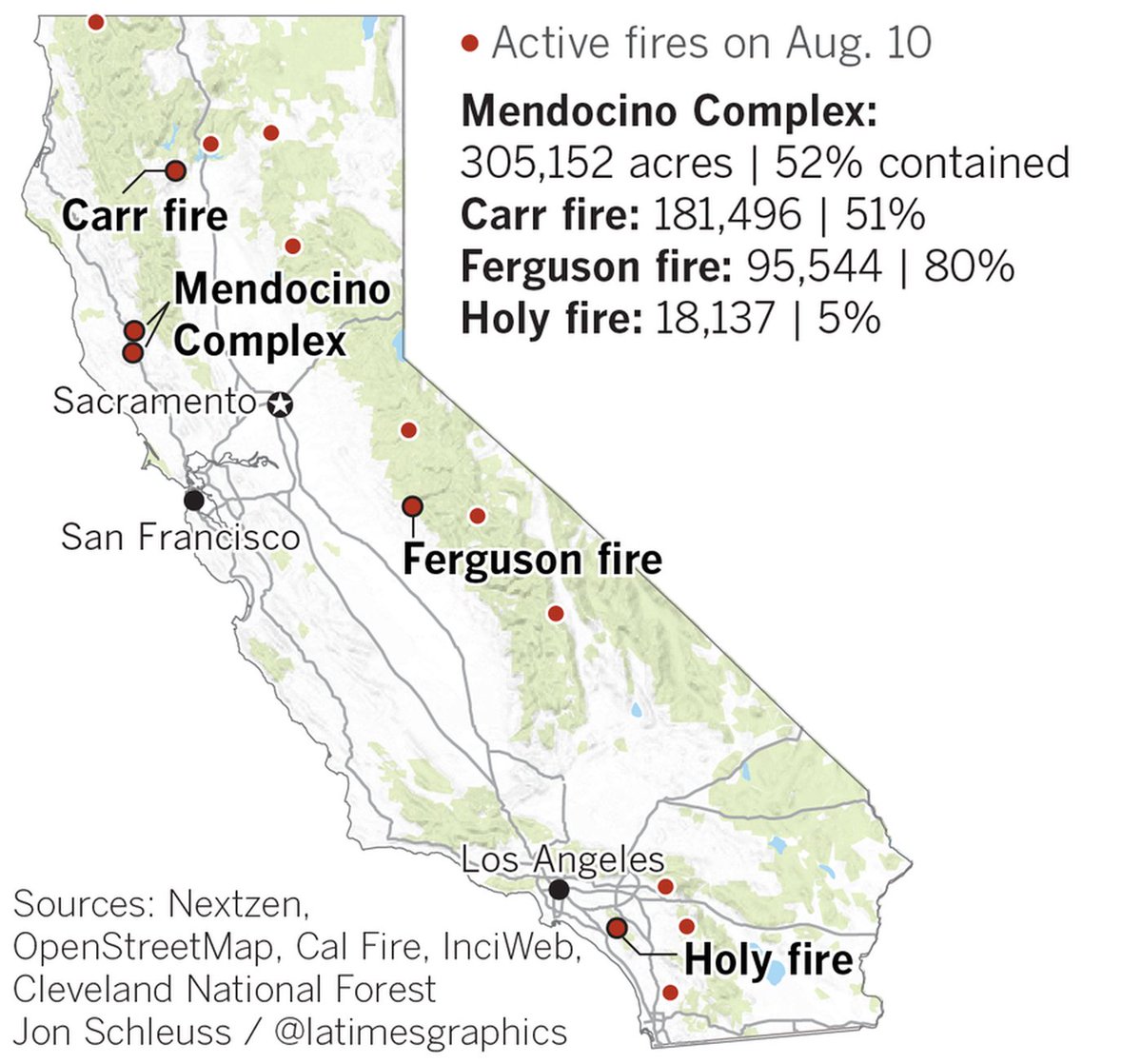 360-degree drone images show the devastation of the Carr Fire: https://wapo.st/2vWOxHA  via @PostGraphics
12:50 PM – 10 Aug 2018
This is a great post on how people can falsely manipulate graphs:

Water temperatures near 80°F on the California coast? It’s true. 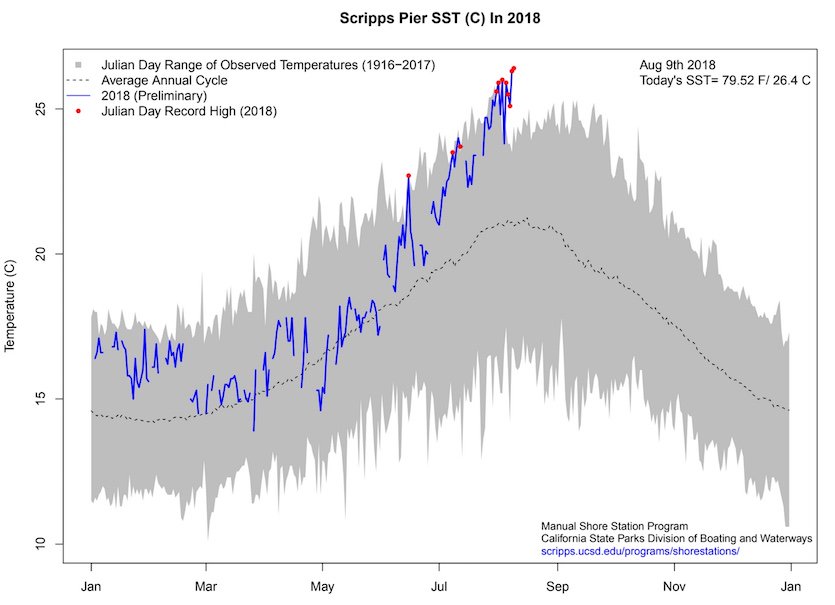 Hot nights are particularly characteristic of #climatechange. There has been a dramatic increase in hot nighttime temperatures in the US, reducing the number of critical relief windows during heat waves. Graphic & collection of peer-reviewed studies: https://buff.ly/2ntSAaC

The U.S. Just experienced its warmest May-July according to @NOAANCEIclimate. During that time a whopping 13,111 daily U.S. record high minimums have been recorded, so far. Nights are warming faster than days. #ClimateChangeIsReal 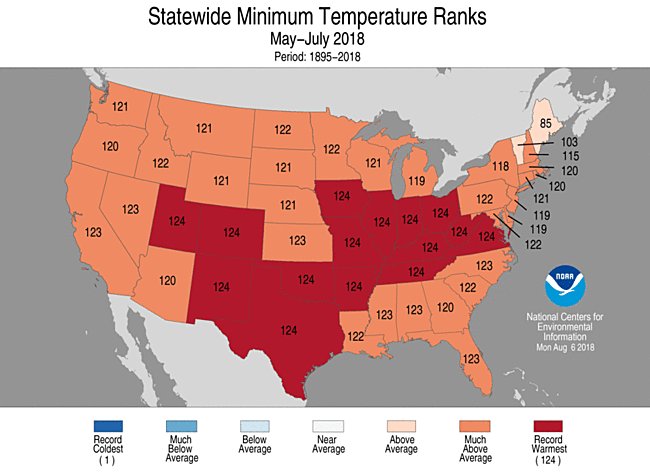 Well today was a banner day in #Missoula #Montana. Not only did we break the daily record, but today ties as the 2nd warmest day ever in August AND the 7th hottest day in Missoula’s climate history (since 1893). 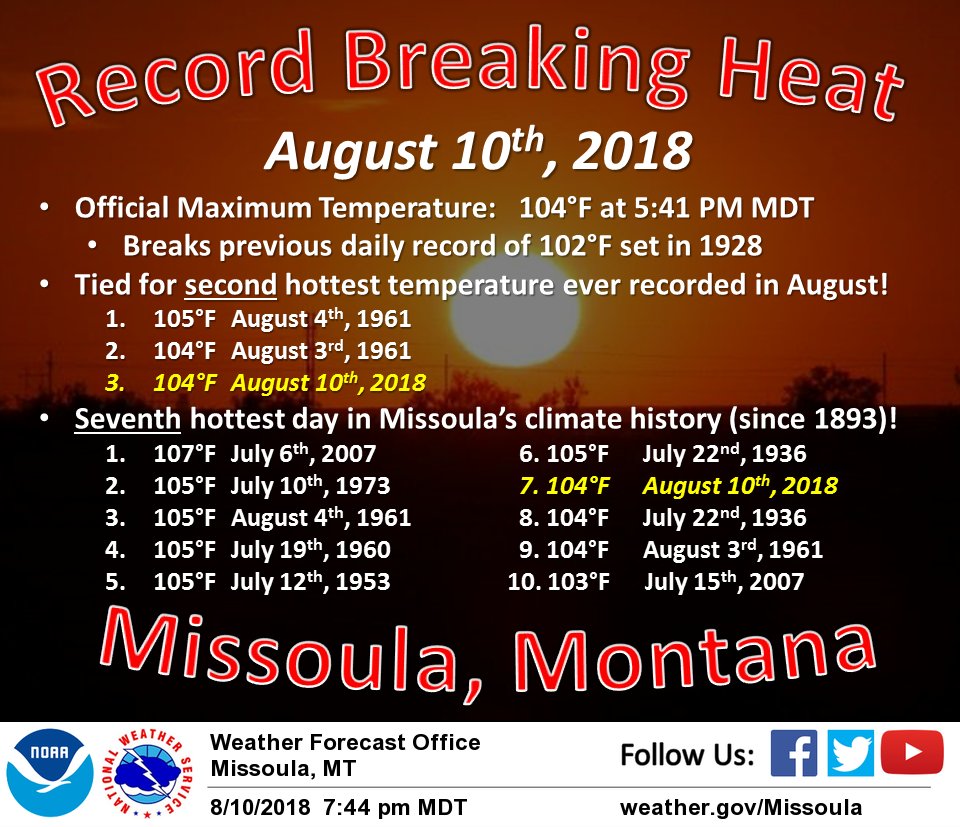 The official high temperature in #Superior #Montana (period of record since 1914) reached 105°F this afternoon, breaking today’s old record of 104°F set in 1935.

This ties as the 10th hottest day on record for Heron since 1912.

At 97.7°F, #Calgary just had its hottest day in 137 years of official recordkeeping. #brokenrecord seems apropos for this summer. 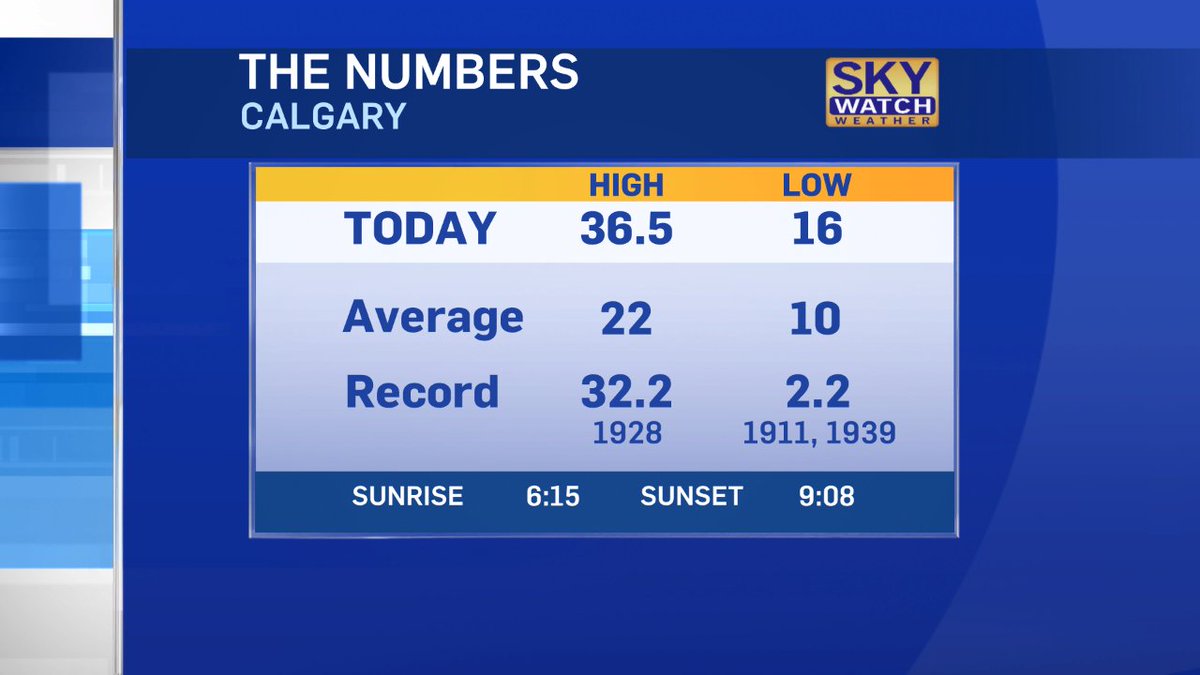 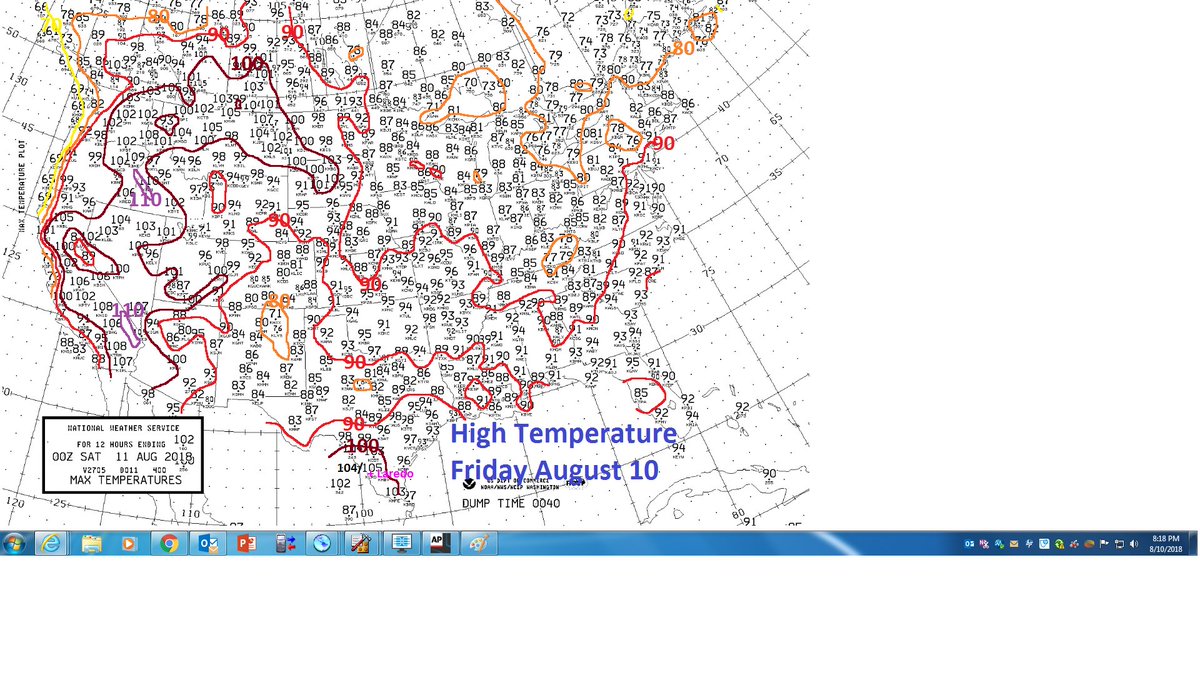