Wednesday August 15th… Dear Diary. The main purpose of this ongoing post will be to track United States extreme or record temperatures related to climate change. Any reports I see of ETs will be listed below the main topic of the day. I’ll refer to extreme or record temperatures as ETs (not extraterrestrials)😊. Here is today’s main climate change related topic:

It’s pretty clear by this point in time that most glaciers are disappearing across the planet due to climate change. Looking at Stefen’s chart at between +1C to +3C above preindustrial conditions alpine glaciers will become a tipping point, meaning that at a certain temperature these glaciers won’t be a planetary regulating cooling factor, rather despite any curtailment of carbon pollution, warming will occur. The answer why is plain and simple…their absence.

Just like with Arctic sea ice the albedo of white ice and snow from glaciers reflect incoming solar radiation. Their slow retreat exposes more dark land, which absorbs radiation. As of 2018 at about +1.0C above preindustrial conditions sadly the fate of most of these massive areas of ice is sealed. For example, in just a decade or two the ice at Glacier National Park in Montana will be gone. Conditions like those of this summer aren’t helping:

The same day it hit a record high of 100 degrees Fahrenheit, Glacier National Park was partially evacuated due to the #HoweRidgeFire. #climatechange @blkahn
6:32 AM – 14 Aug 2018
Just what is an “alpine glacier” and are there different classifications of glaciers? For these answers one can rely on Wiki: https://en.wikipedia.org/wiki/Glacier#Ablation_till

Classification by size, shape, and behavior:

Glaciers are categorized by their morphology, thermal characteristics, and behavior. Cirque glaciers form on the crests and slopes of mountains. A glacier that fills a valley is called a valley glacier, or alternatively an alpine glacier or mountain glacier.[5] A large body of glacial ice astride a mountain, mountain range, or volcano is termed an ice cap or ice field.[6] Ice caps have an area less than 50,000 km2 (19,000 sq mi) by definition.

Glacial bodies larger than 50,000 km2 (19,000 sq mi) are called ice sheets or continental glaciers.[7] Several kilometers deep, they obscure the underlying topography. Only nunataks protrude from their surfaces. The only extant ice sheets are the two that cover most of Antarctica and Greenland.[8] They contain vast quantities of fresh water, enough that if both melted, global sea levels would rise by over 70 m (230 ft).[9] Portions of an ice sheet or cap that extend into water are called ice shelves; they tend to be thin with limited slopes and reduced velocities.[10] Narrow, fast-moving sections of an ice sheet are called ice streams.[11][12] In Antarctica, many ice streams drain into large ice shelves. Some drain directly into the sea, often with an ice tongue, like Mertz Glacier.

Tidewater glaciers are glaciers that terminate in the sea, including most glaciers flowing from Greenland, Antarctica, Baffin and Ellesmere Islands in Canada, Southeast Alaska, and the Northern and Southern Patagonian Ice Fields. As the ice reaches the sea, pieces break off, or calve, forming icebergs. Most tidewater glaciers calve above sea level, which often results in a tremendous impact as the iceberg strikes the water. Tidewater glaciers undergo centuries-long cycles of advance and retreat that are much less affected by the climate change than those of other glaciers.[13]

Here is yet another recently made chart putting tipping points in perspective with the Paris agreement from: https://globalchallenges.org/our-work/annual-report/climate-tipping-points

We see on the above chart that ice, glaciers, and coral reefs are threatened by shorter term warming.

Don’t forget that literally billions of people rely on water coming from glaciers in the Himalayas. Even in Africa people depend upon glacial melt for their livelihoods. Perhaps nowhere else during the early 21st century retreat of glaciers in Africa are a clear, stark climate change marker. I invite all to watch this “Snows of the Nile” documentary: http://glacierhub.org/2014/06/25/documentary-snows-of-the-nile-tracks-disappearing-uganda-glaciers/

Glaciers are melting everywhere, but none so much as the rare equatorial ones that lie on the border between the Democratic Republic of Congo and Uganda in east Africa.

The 2014  documentary Snows of the Nile follows Neil Losin and Nate Dappen, two scientists and photographers whose ambitious expedition is to return to the original sites documented in  historical glacier photographs from the Uganda’s glaciers, the Rwenzoris. Retracing the steps of the Duke of Abruzzi’s legendary 1906 ascent, the images bear witness to a century of climate change. Losin and Dappen, who won a “Stay Thirsty Grant” from Dos Equis (yes, the beer), produced, filmed and edited the documentary.

Uganda’s glaciers, at the heart of Africa, are expected to completely disappear in a decade or two. The Bakonjo people call the Rwenzoris home. They rely on the glaciers not only as a source for water but also as an attraction that generates tourism revenue. Rapid deglaciation results in reduced access to water in rural areas. Women now have to walk longer distances to get water from rivers, lakes and wells, and there is no guarantee that the new sources of water are as clean as the glacial meltwater. Moreover, reduced water availability deepens frequent and prolonged droughts; food security is affected, as rural farmers heavily depend on rain for their crops. Deglaciation also results in a decline of mountain tourism, which leads men to travel long distances in the search for jobs. Moreover, the receding glaciers now contribute less to water flow in the Nyamwamba River, leading to noticeable declines in hydroelectric power.

A group of researchers from a Ugandan university and international organizations just returning from the Rwenzories have predicted the glaciers there may cease to exist in two decades, possibly as early as the mid-2020s, following an expedition to the mountains named the Doomed Glaciers of Africa expedition. Studies have shown that from 1906 to 2003, the area covered by glaciers has reduced from 7.5 square kilometers to less than 1 square kilometer -a small fraction of the original area.

Snows of the Nile and the researchers highlight the fragility of an equatorial glacier, in which all the ice in an the entire mountain range is disappearing. As is the case around the world, the future of the communities who rely on the glacial melt remains uncertain.

Snows of the Nile is available on iTunes and Vimeo.

If you do get a chance to travel please see Glacier National Park in Montana before its main attraction disappears. I dearly hope for the sake of humanity that glaciers will be with us and won’t become extinct like the white rhino.

Thursday will be one more hot day across the South, but readings will be well below record values. The West will remain hot, and the Midwest will continue to be mild. Also, expect another hot day in the Northeast:

Here is some of today’s biggest climate related news:

Just out: NASA global temperature for July. It was the 3rd warmest July on record after 2016 and 2017. Since July is the warmest month of the year, the past July was one of the warmest recorded months ever. Likely among the warmest months since the Eemian 120,000 years ago. 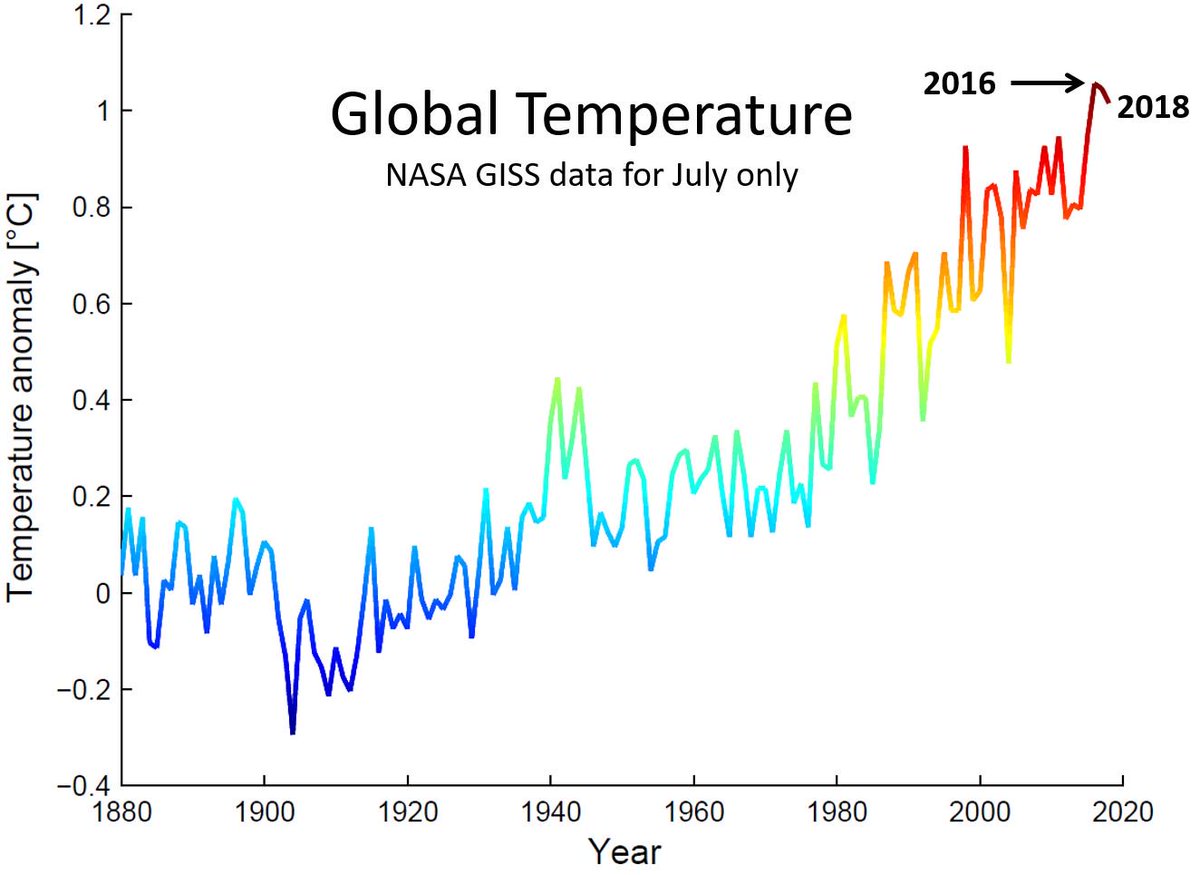 Earth just had its third-warmest July on record, new NASA data shows. The hottest Julys have occurred in the past 3 years.

“expansion of bioenergy in order to meet the 1.5C limit could cause net losses in carbon from the land surface … protecting & expanding forests could be more effective options for meeting the Paris Agreement.”

@DocAHarper in @CarbonBrief on her paper

The problem of climate change is not a tipping point, but a minefield, says climate scientist @MichaelEMann. “The only sensible strategy is to stop moving forward out onto the minefield… We’ve got to bring those carbon emissions down.” http://ow.ly/2uNr30llb6O
Michael Mann on Democracy Now!
3:13 PM – 11 Aug 2018

You won’t find much worse air in the U.S. than is breathed by residents of California’s Central Valley, where workers tend to our produce.

As wildfires get worse, hard-fought gains in air quality are being undermined. @ClimateCentral‘s story with @KQED.