Thursday August 23rd… Dear Diary. The main purpose of this ongoing post will be to track United States extreme or record temperatures related to climate change. Any reports I see of ETs will be listed below the main topic of the day. I’ll refer to extreme or record temperatures as ETs (not extraterrestrials)😊. Here is today’s main climate change related topic:

From any meteorology 101 class we know that hurricanes thrive and can grow stronger from warm ocean water. The threshold for water warm enough to support tropical storm and hurricane formation is about 80F. It makes sense that as ocean waters warm due to carbon pollution land masses whose shores had water too cool to support a storm will become susceptible to the ravages of the tropics.

Much is being written today about the effects of Lane on Hawaii, a hurricane that probably won’t be as devastating to that state as Maria was to Puerto Rico last year due to weakening from wind shear. Nevertheless, I contend that a storm like Lane, which is producing devastating flooding, would not get nearly as close to Hawaii a few decades ago due to warmer water brought about by climate change. Hawaii is becoming a sitting duck just like Puerto Rico. Category 3, 4 or even 5 storms are becoming more likely to make landfall along the chain of pearls, which traditionally sit far enough north to be protected due to relatively cool surrounding water but far enough south to be a tropical paradise.

#HurricaneLane is powered by unusually warm seas. #GlobalWarming is raising the power ceiling for hurricanes globally. And 2 fingerprinting studies have documented the role of #globalwarming in fueling Hawaiian hurricanes. Science run-down here: http://www.climatesignals.org/headlines/events/hurricane-lane-august-2018 … 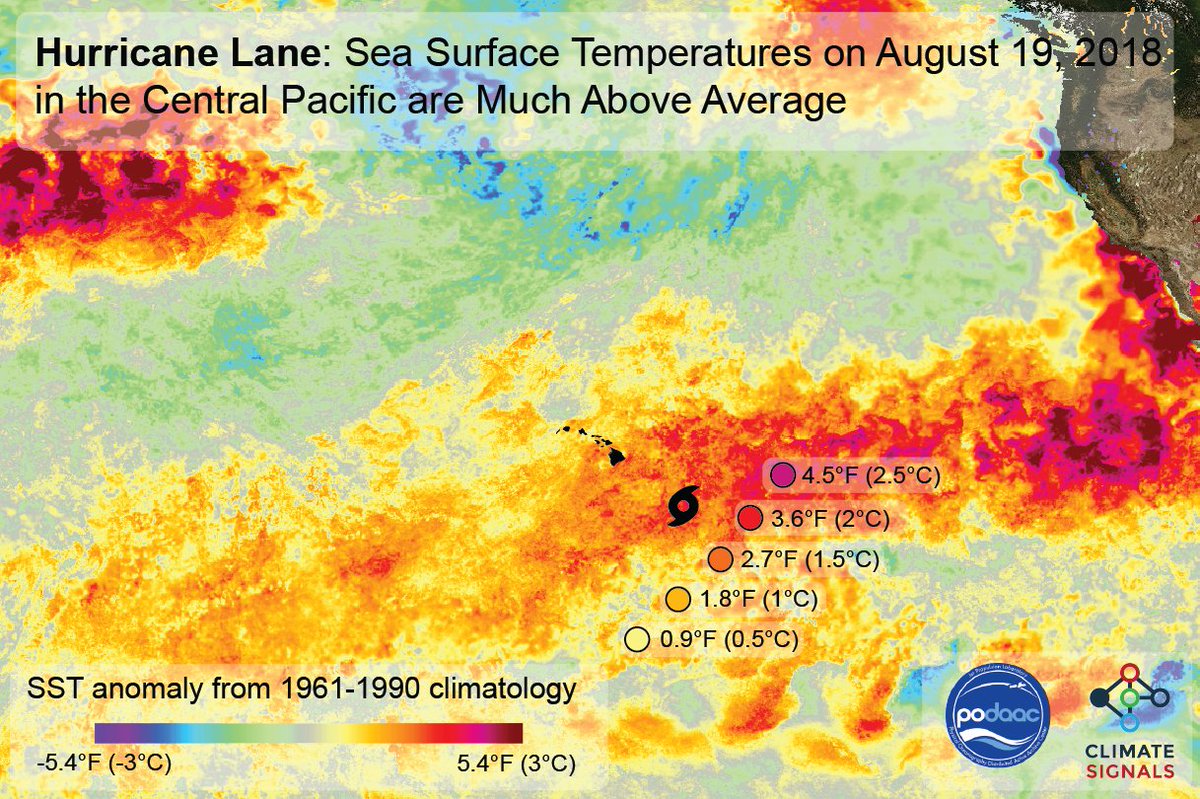 5:05 PM – 22 Aug 2018
This hurricane season Hawaii is bathing in an “odd” band of warmer than average water that surrounds the state and extends northeast to Baja California and Southern California, which is also having its own set of problems partially due to anomalous ocean warmth. According to Climate Signals sea surface temperatures along the path of Hurricane Lane were as much as 4.5F above average from 1961 to 1990 on 8/19/2018. Obviously “unprecedented” category 4/5 hurricanes will become more common due to global warming.
Just how rare is a major hurricane like Lane for Hawaii? Here is that answer:

Only 4 major #hurricanes on record have been within 100 miles of #Lane‘s current position.  The most recent of these major hurricanes was Dora in 1999.

8:29 AM – 23 Aug 2018
Usually Hawaii has been struck by hurricanes in El Nino years when warm SSTs surge north. Lane is getting close to Hawaii in a season that is neutral with no El Nino, which is eye opening for both meteorologists and climatologists. From Wiki: Historically the strongest hurricane to hit Hawaii came during the El Nino year of 1992. Hurricane Iniki (/iːˈniːkiː/ee-NEE-kee; Hawaiian: ʻiniki meaning “strong and piercing wind”) was the most powerful hurricane to strike the U.S. state of  Hawaii in recorded history with sustained category 4 winds of 145 mph as it came onshore in Kauai. Iniki caused around $3.1 billion (1992 USD) of damage and six deaths. At the time, Iniki was among the costliest United States hurricanes, and it remained the costliest hurricane on record in the eastern Pacific until surpassed by Hurricane Manuel in 2013. The storm struck just weeks after Hurricane Andrew, the costliest tropical cyclone ever at the time, struck Florida.
The following graphic shows Iniki’s path:

Notice that just like Lane Iniki approached Hawaii from the south, climatologically the path of least resistance for any organized tropical entity to slam the chain of pearls. I’d argue though that due to climate change warming seas to the east of Hawaii will open yet another avenue for hurricanes to hit Hawaii. Will Hawaii in the future become just as susceptible to strong hurricanes as Puerto Rico or Florida? Perhaps not Florida due to Hawaii’s small size, but probabilities for a hard hurricane hit in coming decades along the 50th state will be just about as high as those for Puerto Rico.
One more point. Shear will probably be Lane’s demise before it gets near Oahu. As the atmosphere warms shear at lower latitudes may weaken. Hurricanes in the future may not weaken, directly affecting Hawaii because of climate change in association with the jet:

So, just like the hard hit state of California, Hawaii has a big reason to fight climate change. Watch for reports coming in from Hawaii as Lane makes its approach from the south today and Friday.

(Spectacular view of Lane taken on Wednesday 8/22/2018 from the International Space Station. Credit: USA Today)
Here is more on Lane:

Hurricane #Lane is only expected to move ~105 miles in 24 hours as it makes a turn close to the Hawaiian Islands, per the 11 AM HST official forecast. The slow 4mph forward speed, with the center at its closest to the islands, is a recipe for extremely heavy rainfall. 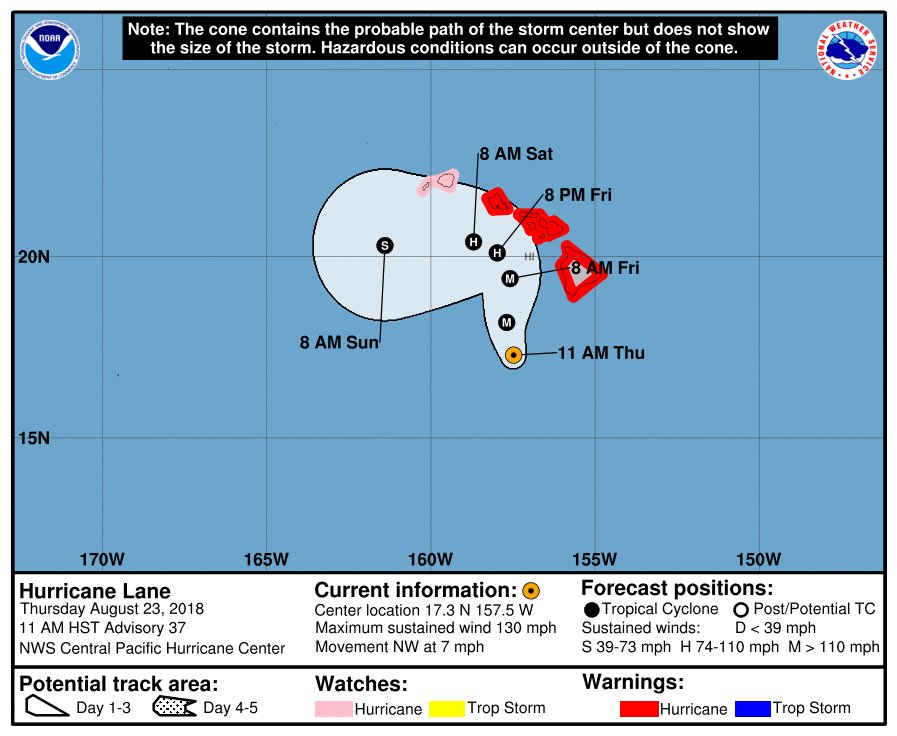 Rainfall could be measured in feet in some spots, as Hurricane Lane brings a risk of devastating floods to Hawaii https://bit.ly/2PxLsXm 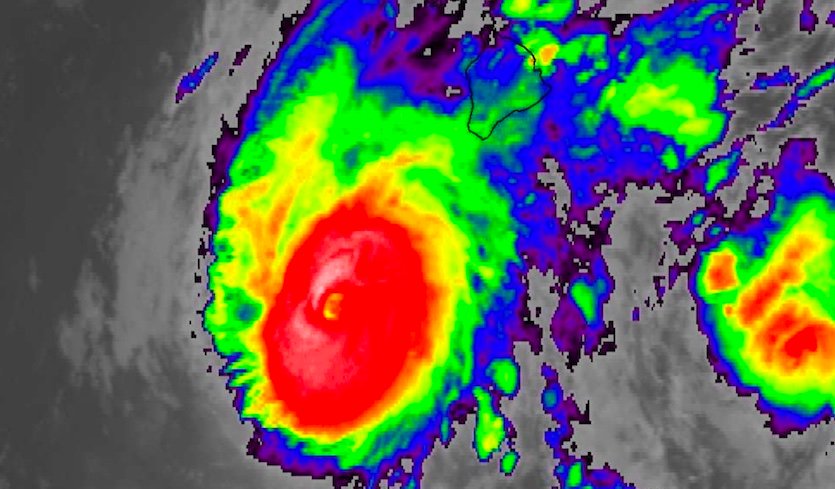 Andrew Freedman‏Verified account@afreedma
Concern is growing about potentially devastating flooding in parts of Hawaii from feet of rain caused by Hurricane Lane.
(Click on the picture to get to this article.)
10:44 AM – 23 Aug 2018
……………………………………………………………………………………………………….
On Friday perhaps the beginnings of the last heat wave to affect the United States this summer can be seen on this graphic as 90s start to be forecast in much of the Plains:

(As usual, this will be a fluid post in which more information gets added during the day as it crosses my radar, crediting all who have put it on-line.)
Here is some of today’s climate related news (click on pictures to get to the articles):

In other news, irony is dead

Tom Lovejoy on “Avoiding the #climate failsafe point” http://advances.sciencemag.org/content/4/8/eaau9981…Cause for “wonderful hope”: “The amount of degraded lands in the world is vast, and restoring them to productivity as well as for biodiversity and ecosystem services is just plain common sense.”
11:11 AM – 23 Aug 2018