Whew what a day Wednesday was trying to keep up with all the twists and turns in association with Florence. I think I got enough sleep last night to carry me through the worst day and following night for the North Carolina Coast…Thursday 9/13 into Friday 9/14. Models have been consistent and quite good indicating that Florence will get very close to Wilmington early Friday morning also catching a slowing forward speed. What hurricane models did not catch were multiple eye wall replacement cycles and light shear that weakened Florence from being a CAT 4 to a 2, thankfully. It looks like plenty of research and tweaking of models will be necessary for better strength forecasts for these monster, life threatening storms.

In one way I’m glad that hype scared away most residents from vulnerable areas. On the other hand, hype can produce a crying wolf syndrome for the public. Nevertheless, CAT 2 Florence will probably do enough coastal damage and be of long enough duration such as there won’t be too many wolf howls of hype from local residents. There will be a high storm surge but not nearly as bad as from that of a CAT 4.

As to attribution I was snickering yesterday when I learned that a study was planned before Florence even made landfall, getting the cart before the old proverbial horse, so to speak. Those yearning to prove and drive home the point that tropical systems are being influenced by climate change were salivating over this one storm, Florence. Still, Florence’s slowing movement due to ridging aloft and probable historic inland rainfall in my opinion are attributable factors. Will Florence be a once in a thousand year event or just a once in a decade type event for the Carolinas? We will see.

As of this writing Florence’s wind field continues to widen and the system is getting a bit more organized with the central pressure falling a bit to 956 millibars. It would not shock me if Florence attained CAT 3 stats again just before making landfall near Wilmington Friday, but this is not the official forecast. In any case, unfortunately, Florence will probably be noteworthy enough to have its name retired by the National Hurricane Center since damage will be counted in many millions of dollars.

Here are some of today’s messages, which will be kept for posterity, in association with Florence. As I have been writing, I’m not going to second guess the National Hurricane Center, the best and most trusted source, unless guidance greatly deviates from their forecast. Usually if models go in a different direction NHC will make adjustments. I will snapshot model scenarios, but all reading this post should follow NHC as presented by The Weather Channel to get the best forecast.  I will group information in this fluid post under each six hour period in which model guidance is processed. The latest guidance will be at the beginning of the article with archived prior messages kept towards the end of Thursday’s Diary. I’ll label each group with the time models are processed. So here we go:

Information coming in after the 18Z Thursday models from 9/13/2018 were processed:

As dramatic as some of the pics and stories are this evening, everything up to this point has been very well predicted. Most of the damage from #Florence will occur in the next 24 hrs with the storm surge but river flooding damaging will extended through the weekend. 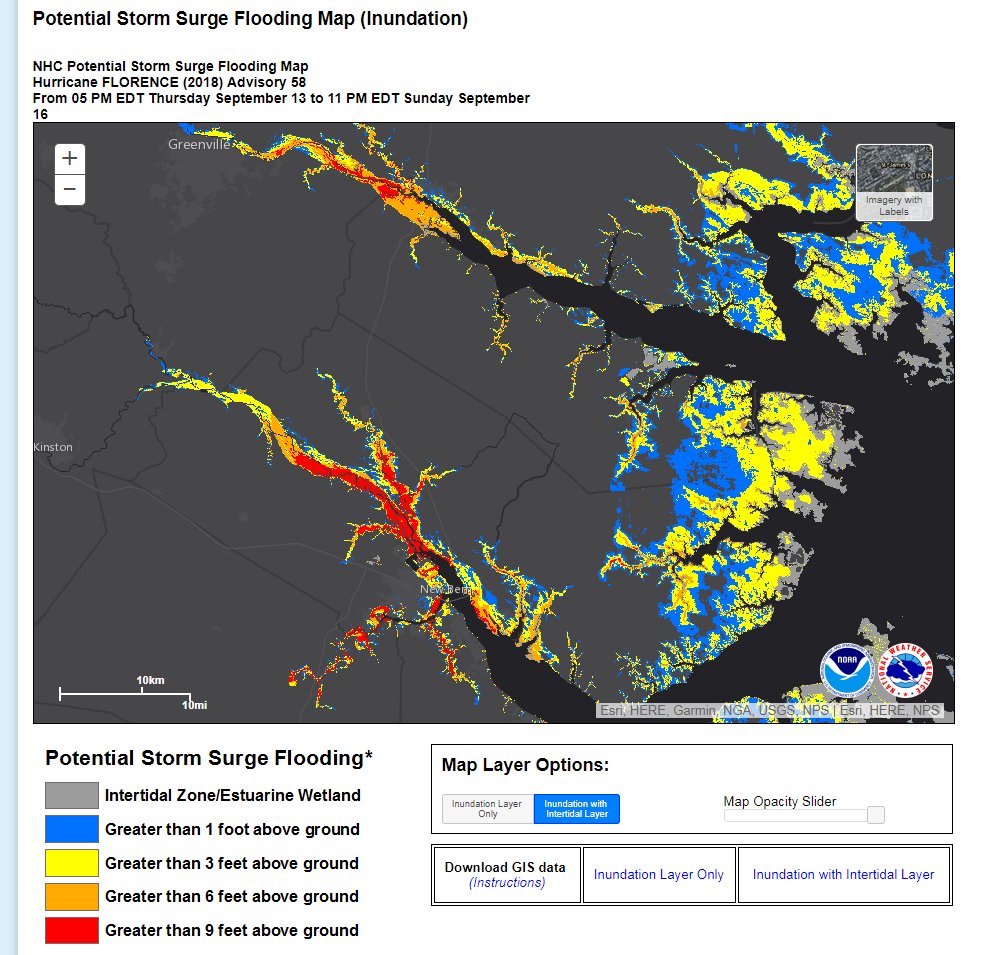 Longer, fast radar loops can help address illusions created by short-term wobbles… In this case the recent northward jog appears to have been a gyration of the inner eyewall of #Florence around in the larger gyre, with the overall center of that moving more steadily pic.twitter.com/By5fP5b8rT 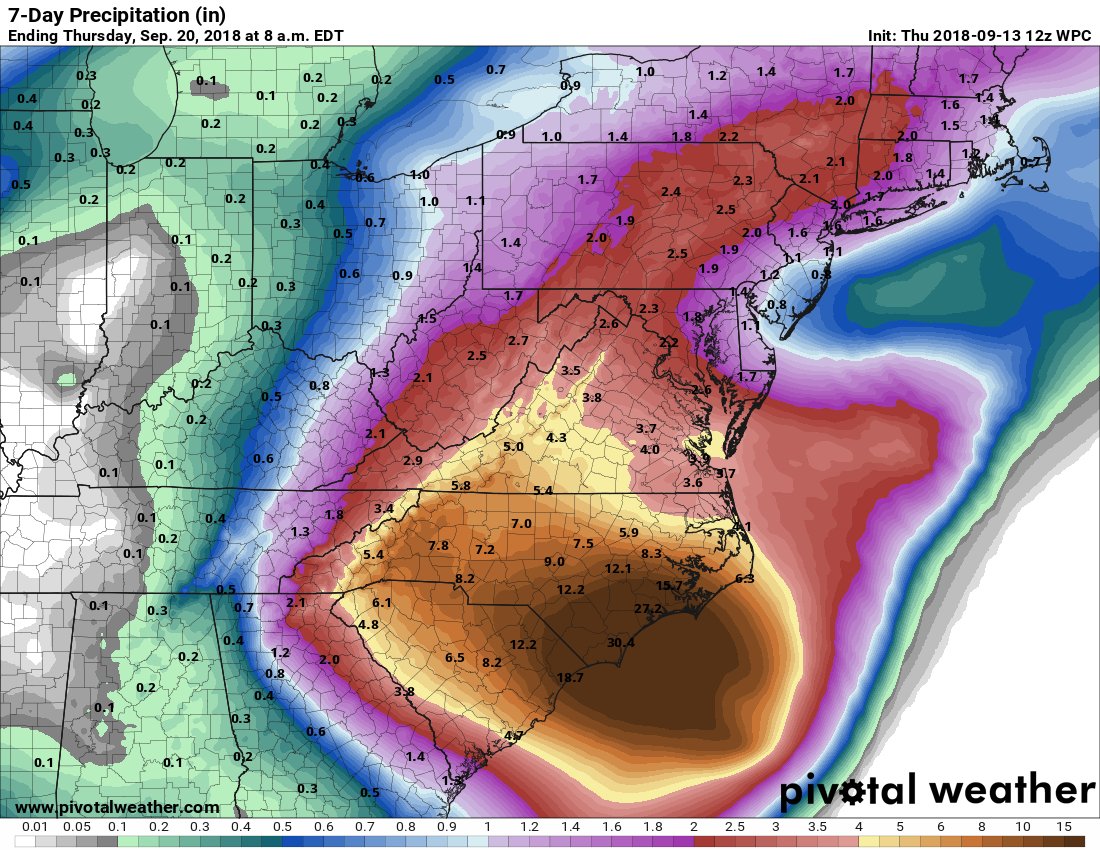 In the ‘sad but true’ category:  Well-known national media personality claiming @noaaa and the @NHC_Atlantic inflating #Florence warnings to push a climate agenda.  This is BS – nothing could be further from the truth.

The most recent NCEP WPC rainfall prediction for Hurricane #Florence would shatter the historical record for 7-day rainfall accumulation by more than a foot. 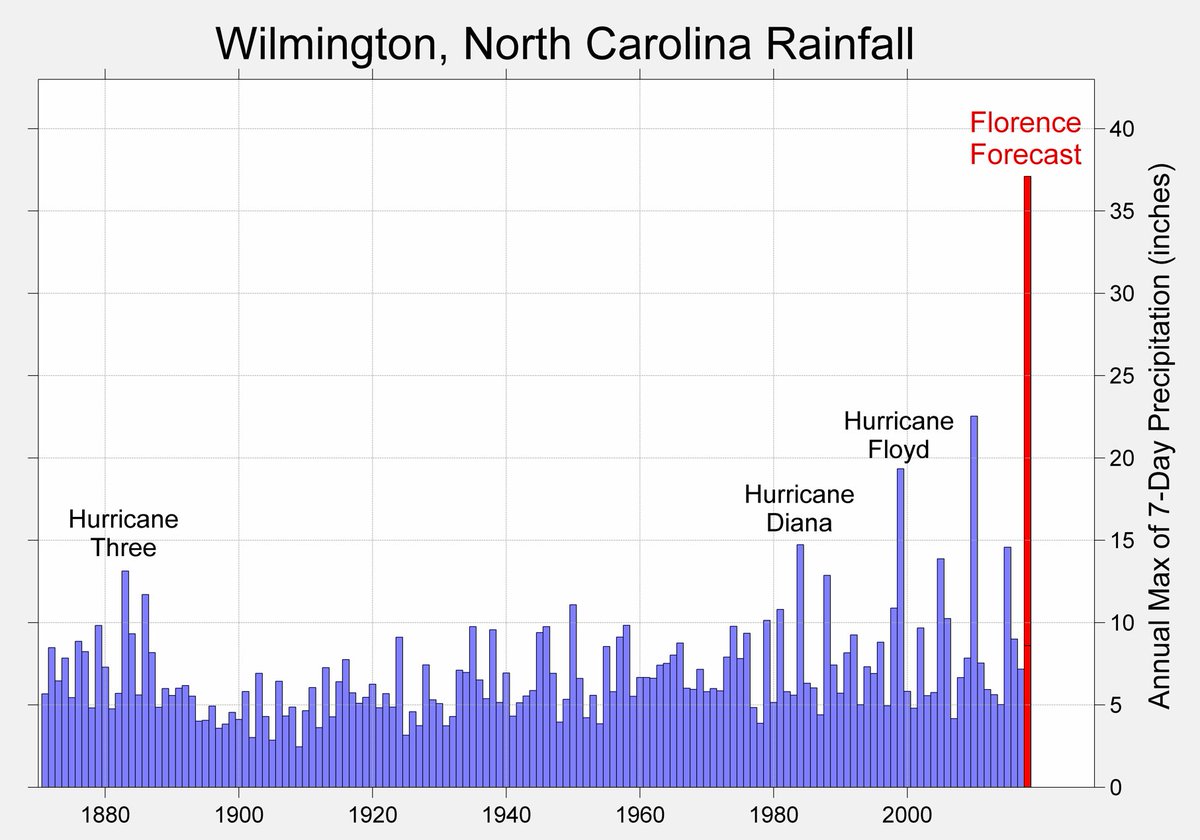 On air meteorologists in New Bern casually explaining the building has been evacuated due to Florence’s storm surge but they’re sticking around to stay on air and inform the public pic.twitter.com/bOaaM8eP8n

112 mph wind gust just recorded only 20 miles off the NC SE Coast.  That type of wind will be over Wrightsville Beach and Carolina beach overnight!!! 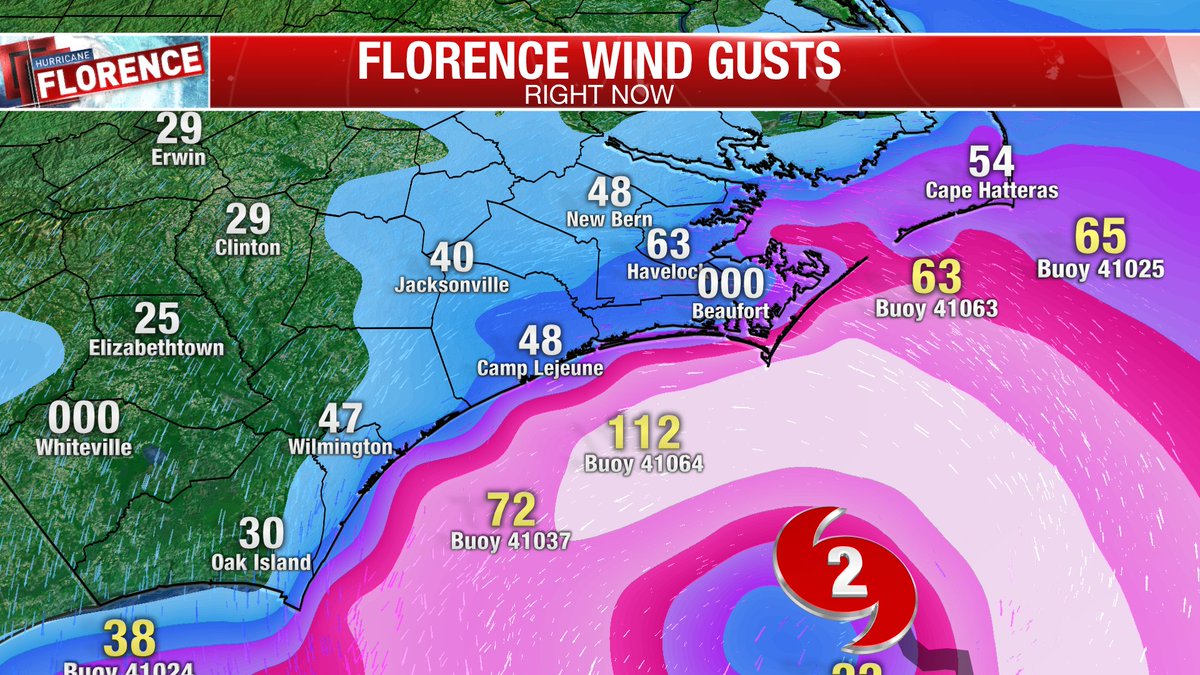 The 18Z THU Op. GFS unfortunately is trending towards the 12Z THU EURO being much slower and more southwest with the track of #HurricaneFlorence. I woudn’t want to be located anywhere near the coast from Myrtle Beach to Morehead City through Saturday morning. 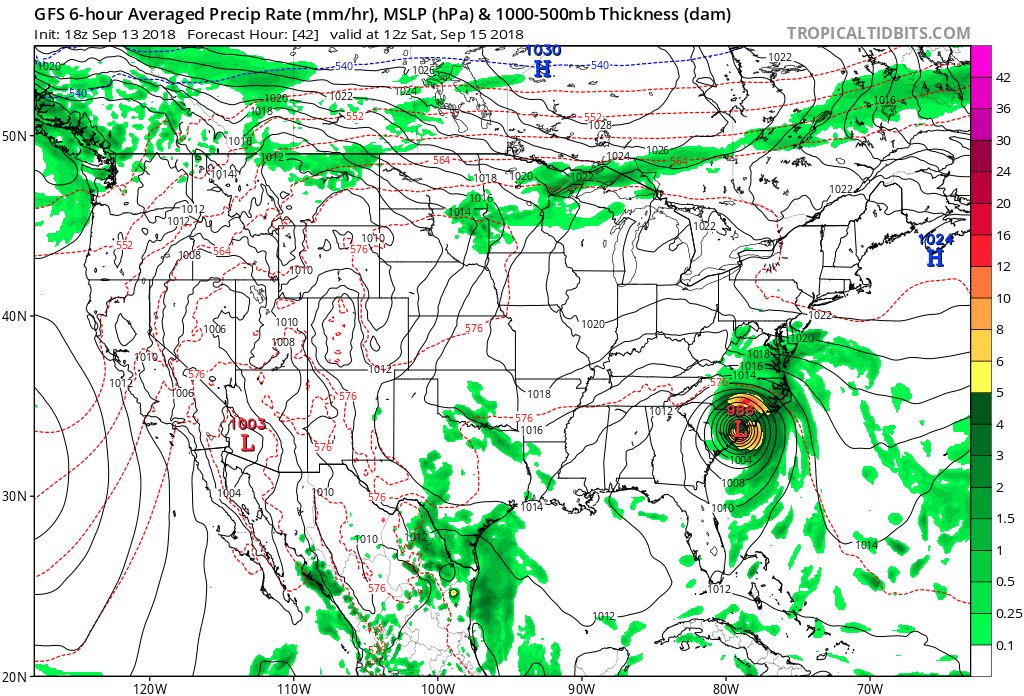 Information coming in after the 12Z Thursday models from 9/13/2018 were processed:

#Florence is forecast to drop 12-24 inches of rain, with isolated areas of 30 inches by this weekend! Take care and know the impacts. #WRN #NCwx 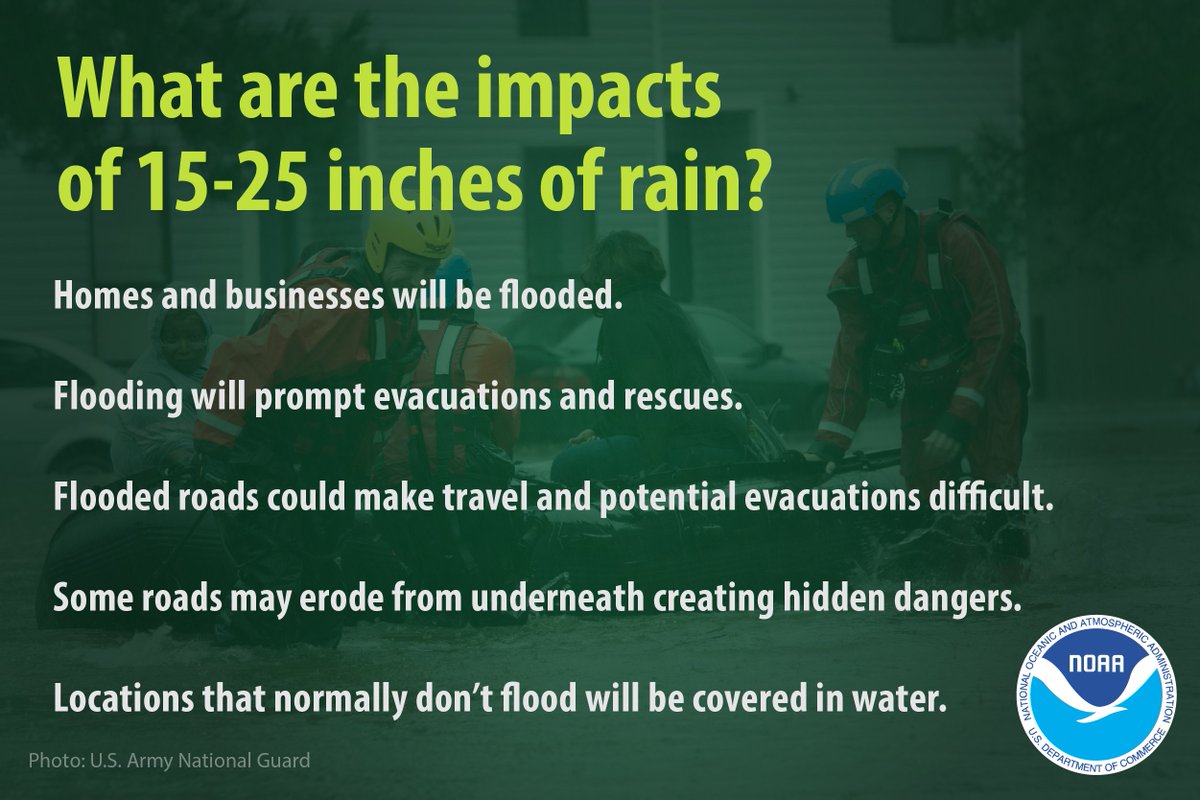 How much kinetic energy is #Florence packing in its wind field right now? About 60% as much as Irma, Ike, and Katrina did at landfall, per Mark Powell (http://RMS.com ). That’s still an enormous, dangerous amount. https://bit.ly/2Qph2qK 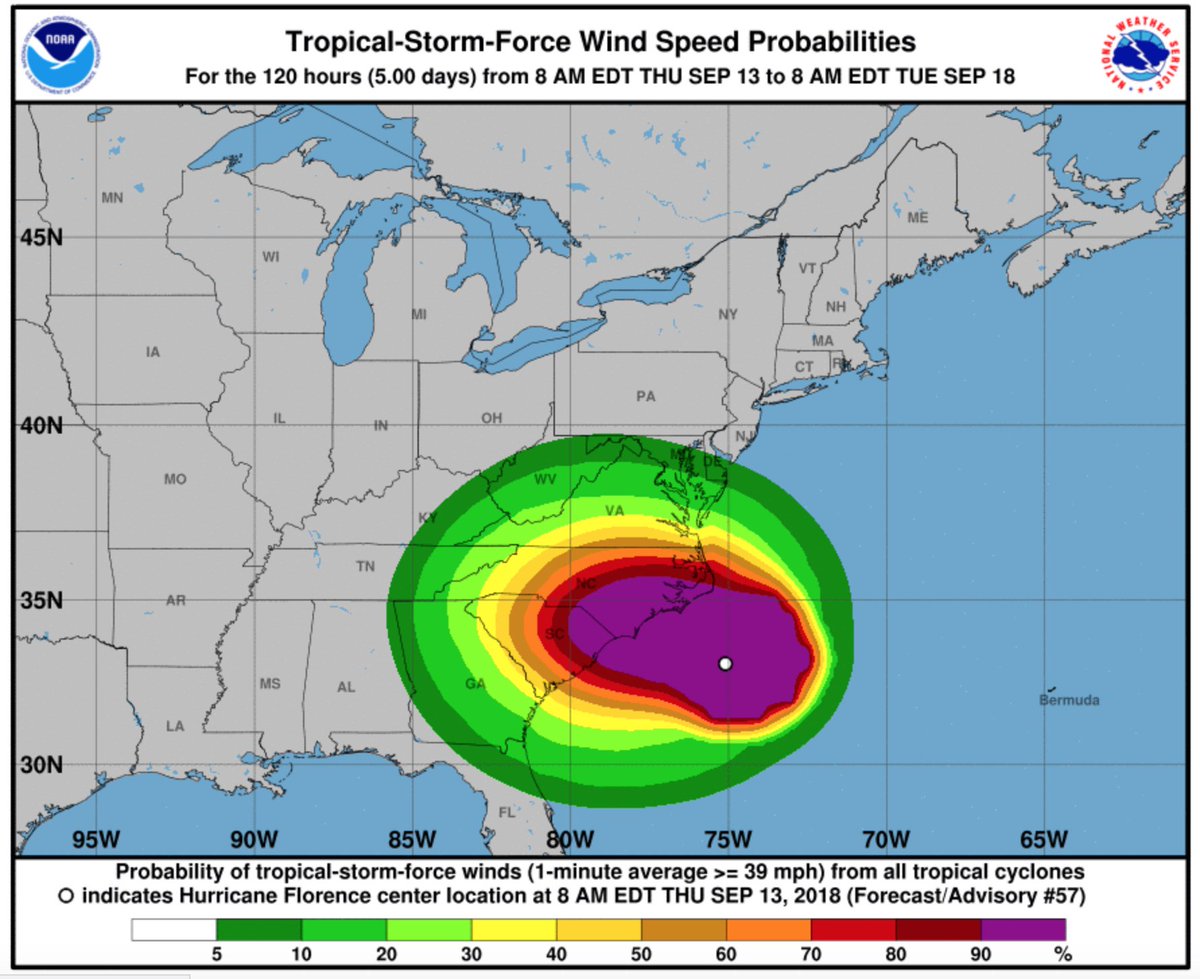 Regardless of *peak* winds at landfall, Florence’s broad wind field will be enough to topple trees in wet soil & bring down power lines over a large area.

For those still following weather model forecasts, latest ECMWF is consistent w/the going forecast. #Florence slowing down, gradually decreasing in intensity, & turning W then WSW parallel to the coast. If #NCwx landfall occurs, it would be near/S of #Wilmington #SCwx‘s turn Sat 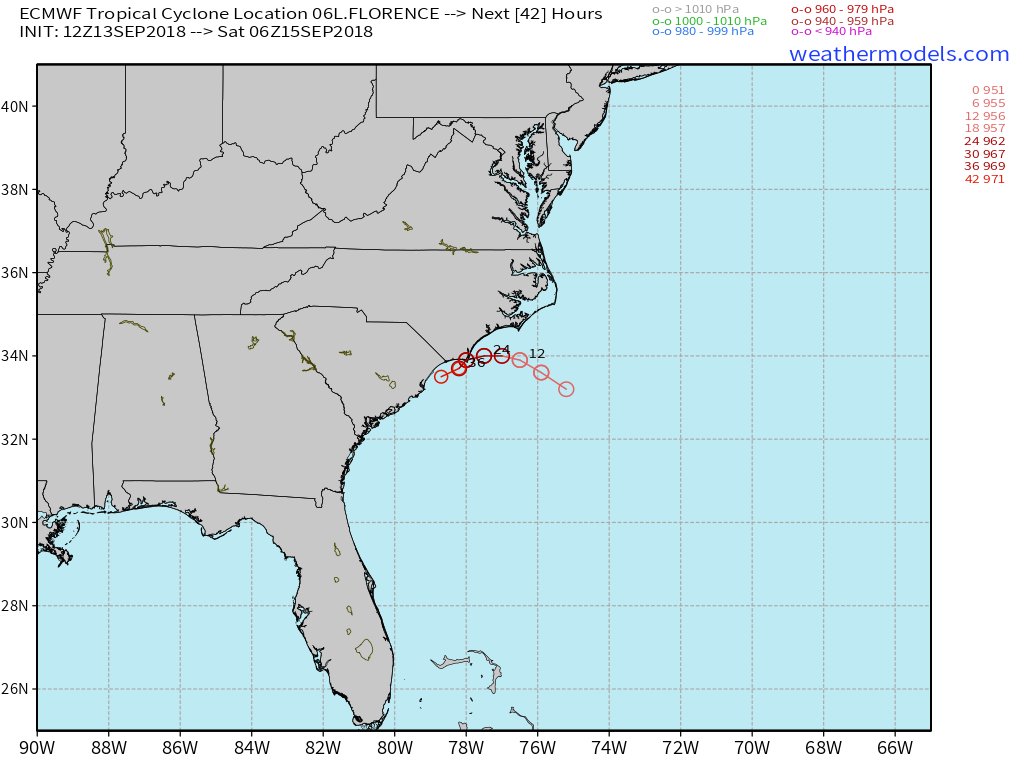 Now, the #tornado threat will also increase throughout the course of today and likely tomorrow as well from #Hurricane #Florence effectively due to the spiral bands encountering surface friction as they move ashore. Thanks for sharing, @TropicalTidbits! #ncwx #scwx #vawx 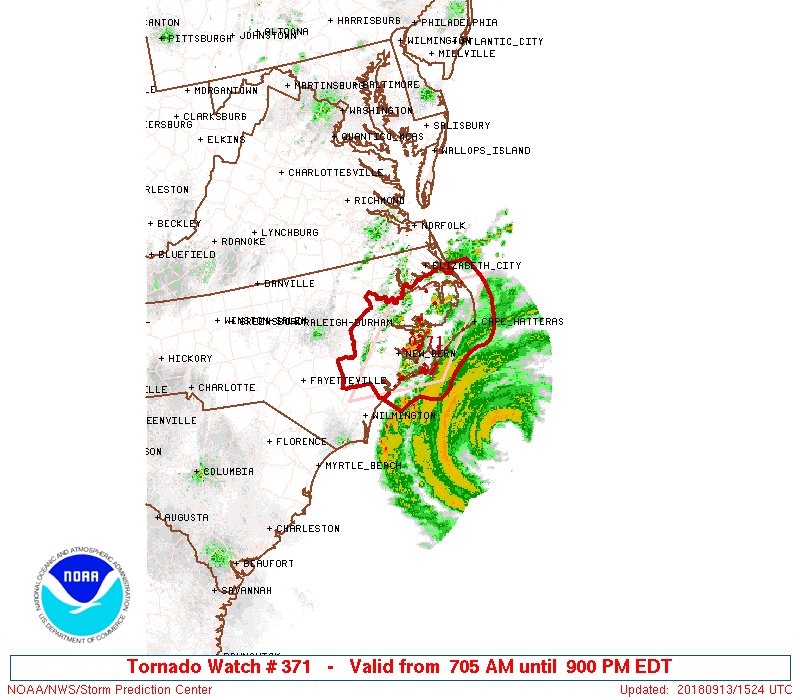 Levi Cowan @TropicalTidbits
Remember, tornadoes can occur within the outer bands of #Florence as they move ashore. A tornado watch (potential for tornadoes) has been issued by the Storm Prediction Center, and some tornado warnings (existing tornadoes) have already been issued for some of these cells.…
9:06 AM – 13 Sep 2018

The #GOESEast Geostationary Lightning Mapper captured this 3-day time lapse of all the lightning strikes in #HurricaneFlorence on its path toward the U.S. (Sept. 10-13, 2018). See more: https://t.co/zU4z4oQcYs #lightningfromspace pic.twitter.com/cSuVWhN4xE

12Z THU Op. GFS mirrors the official NHC track much like that of prior 06Z run. Model worrisomely strengthens #HurricaneFlorence back to a CAT 3 before making landfall near Wilmington tonight. This will be a long duration event over this coming weekend. 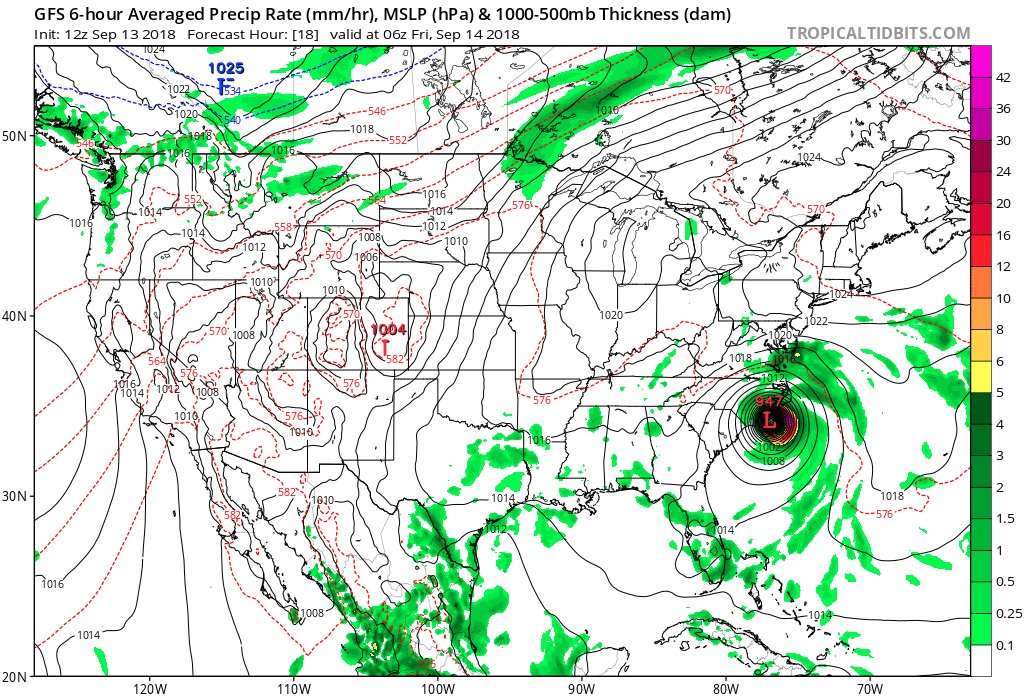 Information coming in after the 06Z Thursday models from 9/13/2018 were processed:

06Z THU Op. GFS mirrors the official NHC track. Still, this will be a long duration event over this coming weekend. #HurricaneFlorence will probably hit Wilmington as a CAT 2 system tonight. 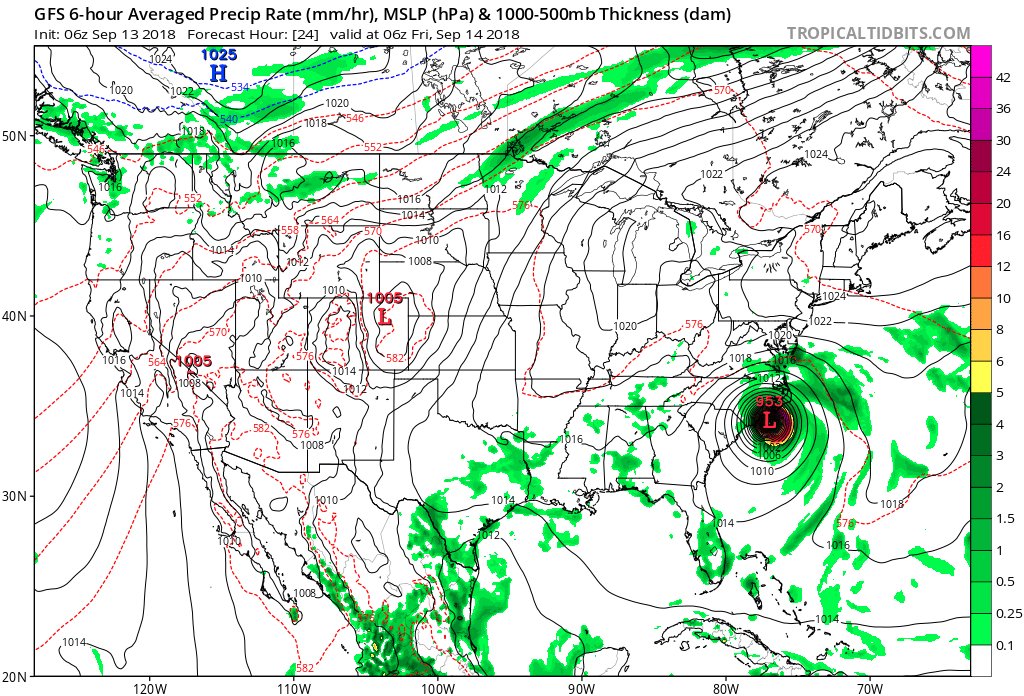