In October many of us are thinking about what to don for many a Halloween party or Trick or Treat outing with kids. A few kids may want to wear Batman or Robin costumes. Well, for a good chunk of the month one would think that the Joker from Batman or some other fictitious fiend will be playing many tricks on the weather from coast to coast across the country. Mr. Freeze will be paying an early visit on the West producing an instant winter while some sort of heat monster will take up residence in the East extending a seemingly endless summer. The battle ground area of the Plains will see all measure of super moist conditions where the Penguin would be right at home. Seriously, though, climate change signatures are starting to appear all over the U.S. map.

I first alluded to this coming weather pattern here:

Since posting this Rosa has left its unusual wet mark on the Southwest the first few days of this month, dumping several inches of rain on the deserts. For specifics see this new Bob Henson post:

The rain wasn’t all bad falling in drought parched areas in the Colorado River Basin. Rosa left a treat over Phoenix. I wish that I could find a pot of gold at the end of this rainbow.😉:

Check out one of the most intense rainbows we’ve ever seen above Phoenix, AZ #azwx Photo: @geraldferguson 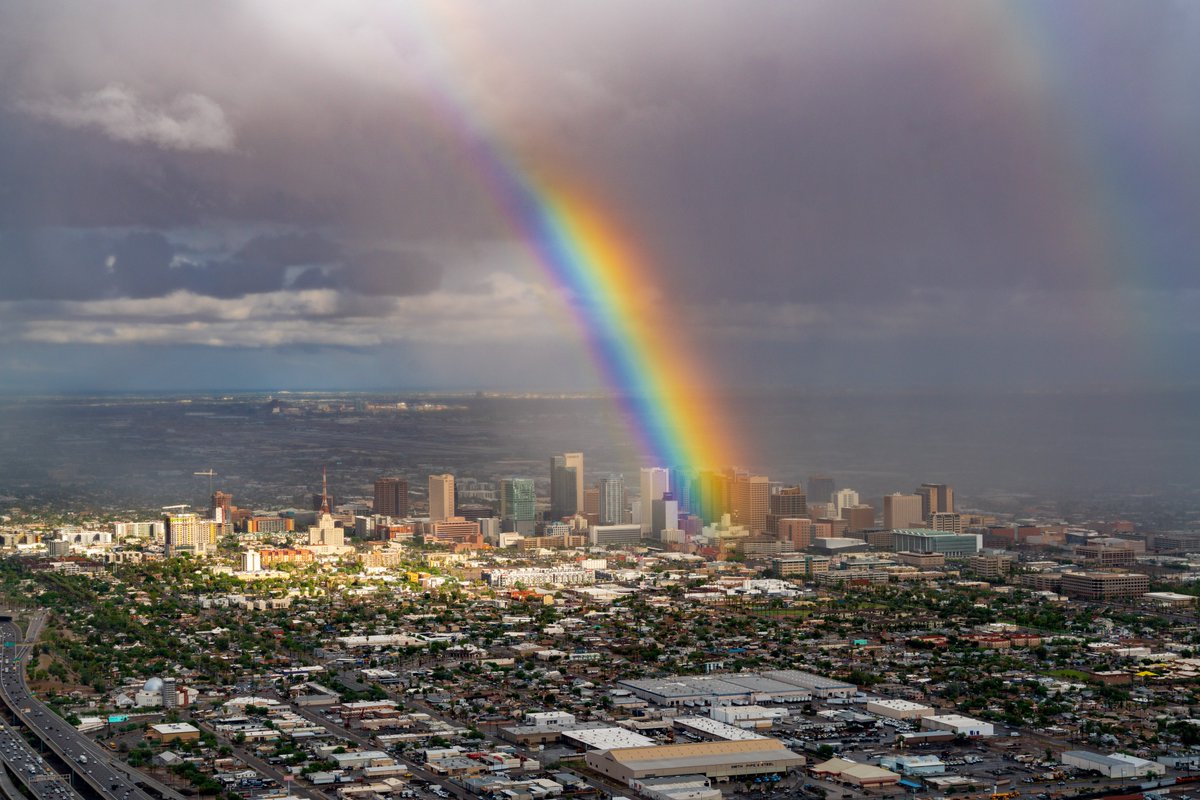 6:52 PM – 2 Oct 2018 from Phoenix, AZ
Others have taken notice of how amplified the jet stream will become:

Impressive. The jetstream dip over the West is predicted to make it all the way into Baja California. This is not common. 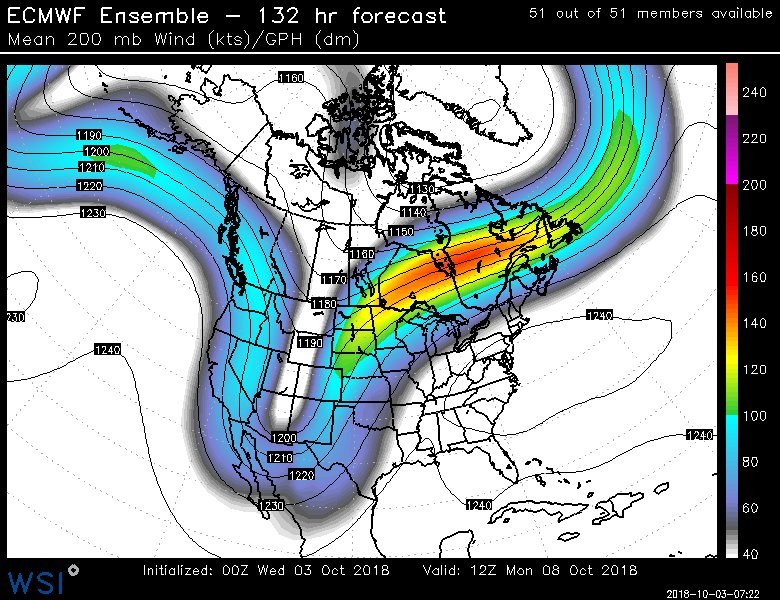 6:13 AM – 3 Oct 2018
Not common indeed Mr. Ventrice. On the latest model runs I can’t recall a jet this amplified digging through the West while heights getting near 597 decameters pop up in the Middle Atlantic:

I contend that such a forecast pattern as depicted on the above Pivotal chart is highly indicative of climate change. Not only are 500 millibar heights at record warm levels in the East, but the cold pocket in the West is one giant, cold closed low. As long as the polar vortex remains over the Northern Hemisphere we will continue to occasionally see cold pockets getting squeezed southward producing all sorts of anomalous and sometimes unwanted severe weather. In this case there will be snow in the Rockies, which for most will be welcome and a skiers delight. In the Plains, though, we probably will see some severe weather with flooding, as well.

All ready, and partially due to Rosa, we have a super moist air mass over the Midwest: 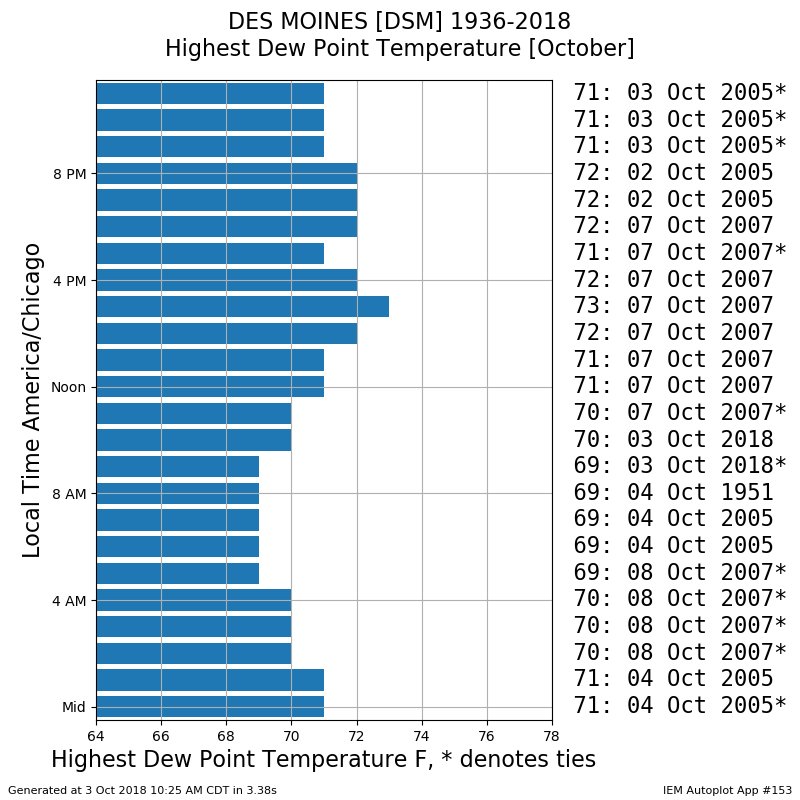 After Phoenix’s wettest October day on record, torrential rains will head for the Plains this weekend. Some places could rack up storm totals of 10″ or more. https://bit.ly/2DV5s4w 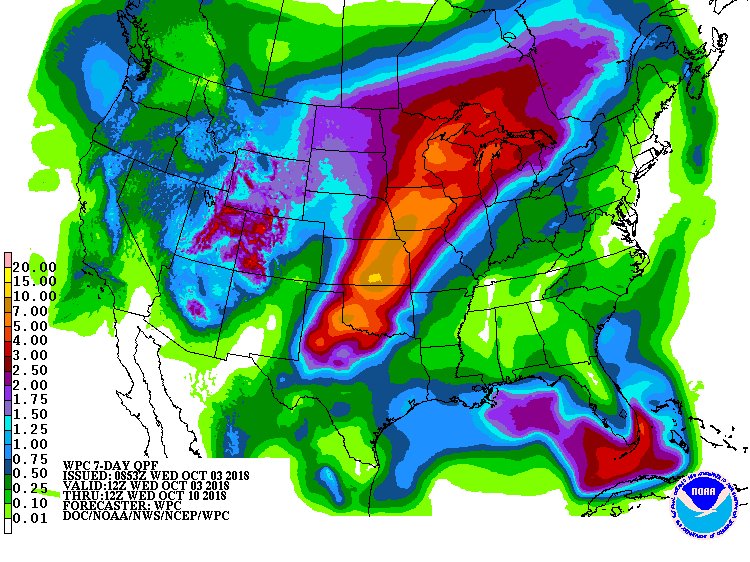 9:31 AM – 3 Oct 2018
As far as that western snow goes it looks like there will be several inches if not more than a foot at higher elevations from the northern Rockies south to Colorado by sometime early next week. To me this is an incredible looking weather chart from coast to coast valid by the time we see that near 597 decameter ridge in the East:

The East should experience more record heat through the middle of the month. We will see if October 2018 has as many warm locations as that of September 2018: 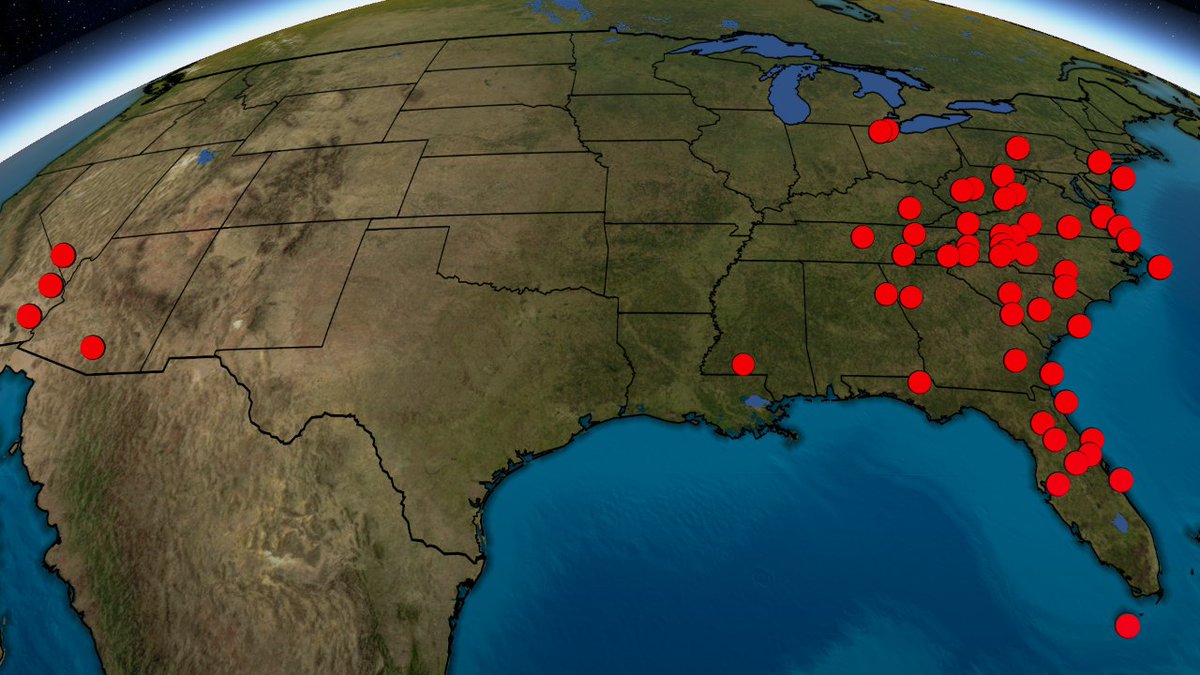 The 90 degree high temperature in #Atlanta this afternoon was the first time a high in the 90s was observed in Atlanta in October since 1954! Highs are expected to reach into the 90s again throughout much of our area on Thursday afternoon, as well. #gawx 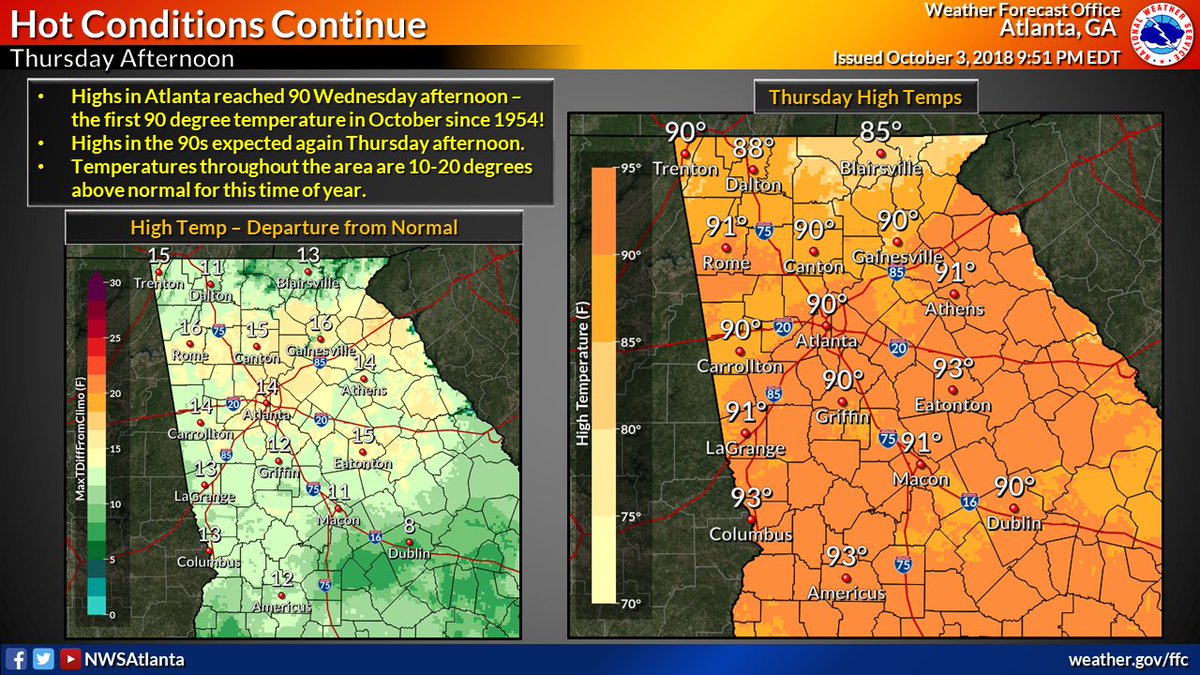 7:15 PM – 3 Oct 2018
We saw another sign of global warming in the East in September, which I have no doubt will be continuing under the ridge in October:

This ugly map encapsulates the weather on the East Coast during the month of September.

“It was hot, steamy, oppressive and smelly. The mud was never-ending. The most generous thing I can say for the month is that it’s finally over.” — @angelafritz https://www.washingtonpost.com/weather/2018/10/02/this-swampy-brown-map-sums-up-september-eastern-us/?utm_term=.c8656be907dd&wpisrc=nl_energy202&wpmm=1… 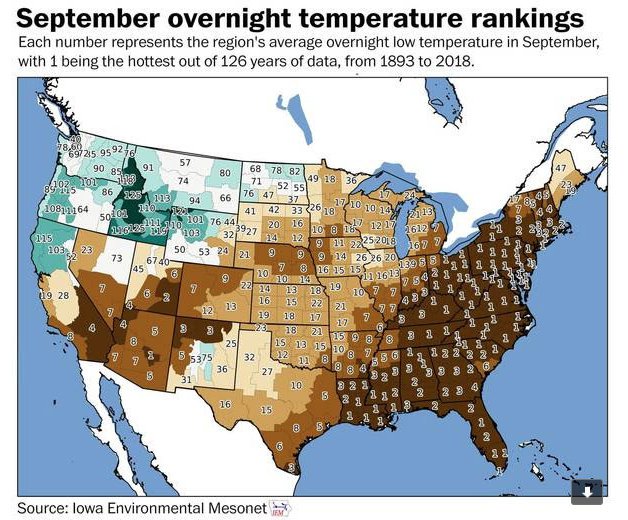 6:52 AM – 3 Oct 2018
Let’s not forget about Alaska. More warm ridging aloft will continue to occur causing this record to be extending in Fairbanks:

Where is our snow? #Fairbanks is on track to have one of the latest “first autumn snows” of record. Over the past century, the first snow (any amount, even just a flurry) typically occurs in the second half of Sept. Not this year though. #akwx #snow @Climatologist49 @newsminer 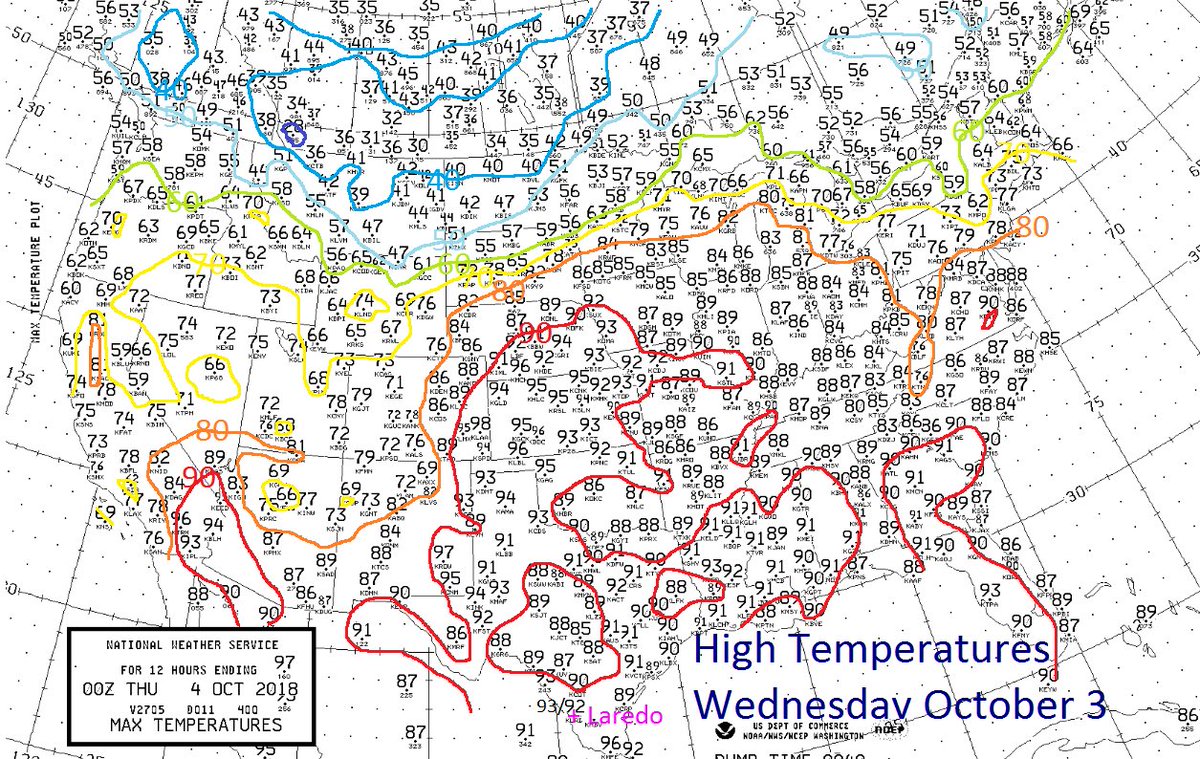 7:31 PM – 3 Oct 2018
Oh, and there is a slight chance that this weather pattern might produce a tropical system in the Gulf of Mexico:

CMC model 10 day Forecast for the Western Atlantic 10/3 12 am While T.S. Leslie meanders about the Atlantic. A low forms off the Coast of Honduras, moves North & strengthens to a T.S. continues through the Gulf & makes landfall on the MS & FL border, then moves NE into the U.S. pic.twitter.com/IR0wvISb8g

As of this writing most models have backed off on a storm in the Gulf, but the situation there needs to be watched….and I will.

Like taking a trip in the Batmobile most folks will have a wild ride from the weather this month across the U.S. Stay tuned to this site for much more bat crazy weather reports.