Thursday October 4th… Dear Diary. The main purpose of this ongoing post will be to track United States extreme or record temperatures related to climate change. Any reports I see of ETs will be listed below the main topic of the day. I’ll refer to extreme or record temperatures as ETs (not extraterrestrials)😊.  Here is today’s main climate change related topic:

Wild And Wet In The Eastern U.S. — Another Sign Of Climate Change

My topic for the day posts have been getting a little lengthy lately, so this one will be short and to the point. What we have seen in the United States this summer going into the fall, particularly in the East, is not normal.

This would be an impressive tornado outbreak in the East for any time of year, but in October it’s unheard of 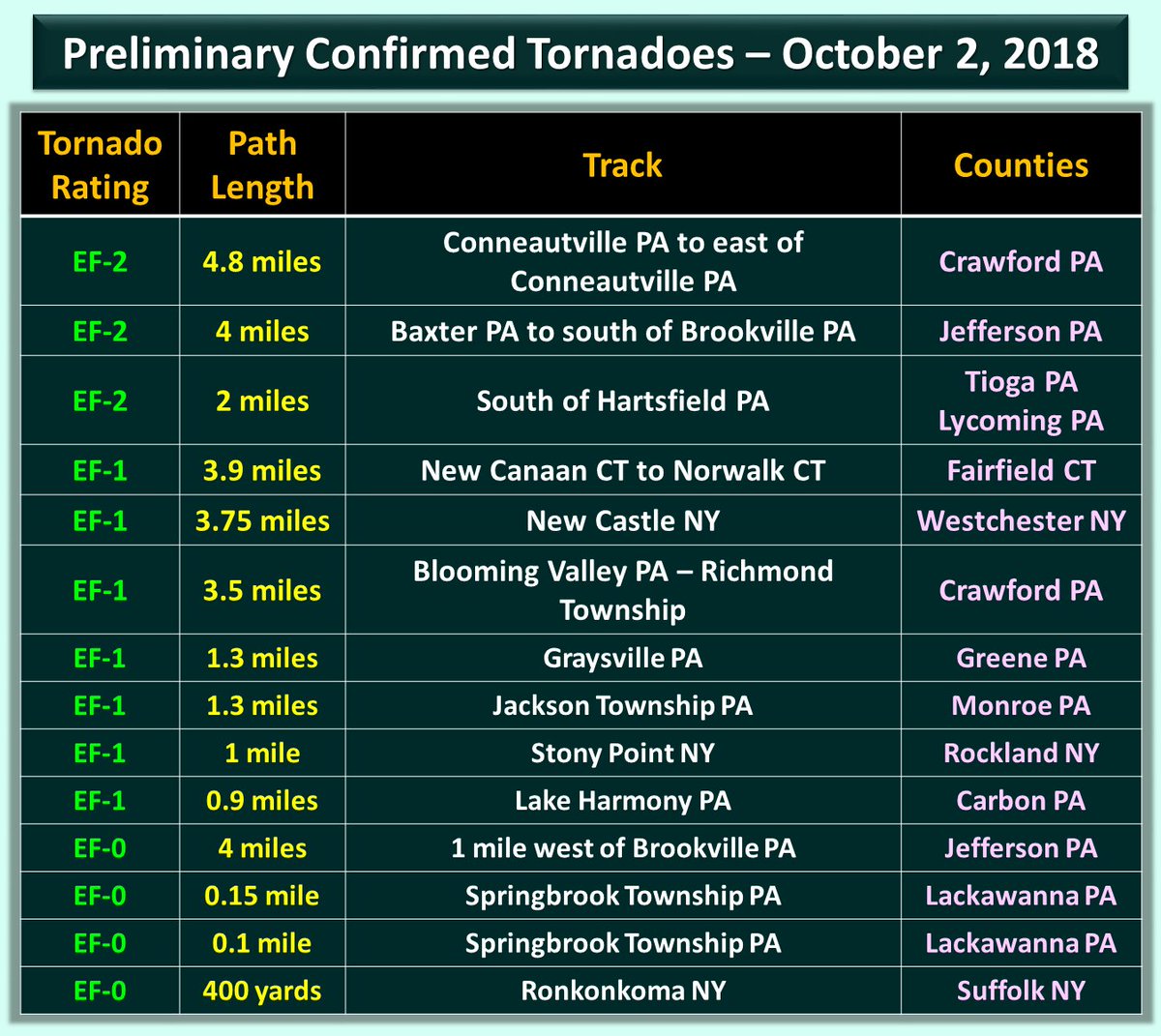 NWS Eastern RegionVerified account @NWSEastern
Preliminary storm surveys have confirmed 14 tornadoes from Tuesday’s storms across PA, NY and CT.  Three of the tornadoes were EF-2s, 7 were EF-1s, and 4 were EF-0s.  Additional storm surveys are planned for Thursday.
5:14 AM – 4 Oct 2018

Map of confirmed tornadoes from Tuesday’s event in the Northeast. 14 confirmed so far with surveys still ongoing 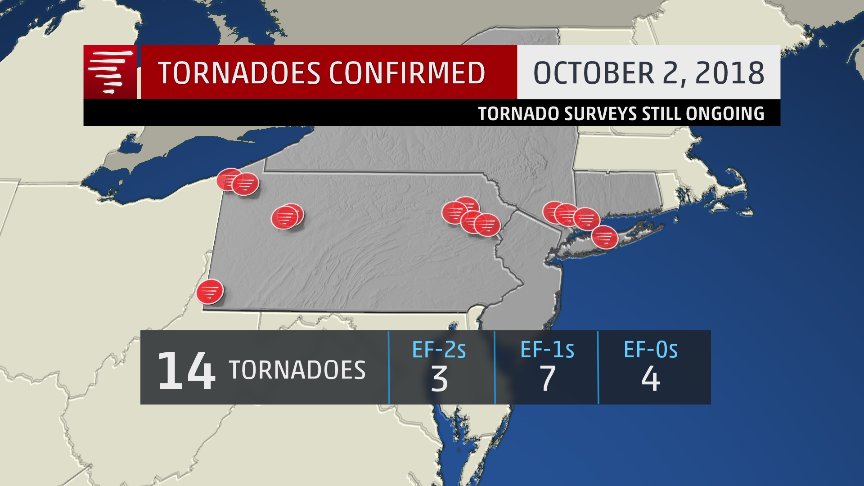 8:09 AM – 4 Oct 2018 from Marietta, GA
Let’s briefly look at the 500 millibar pattern during the middle of the day on Tuesday when the severe weather outbreak occurred:

On the above Pivotal chart we see a subtle dip in the jet (or in met speak a short wave)  in Pennsylvania and New York, which was responsible for the outbreak. Notice that there was a huge summer-like ridge bisecting the southern part of the country responsible for both anomalous heat and moisture that interacted with the short wave. The heat was converted to energy for storms to work with in Pennsylvania, which would normally have chilly and more stable conditions in early October.  Again, we can chalk up another climate change related weather incident.
Now let’s look at some new tallies for rainfall from a very wet year in the East:

With roughly a quarter of 2018 still to come, a large percentage of Eastern US locations have already exceeded their average annual rainfall total. Two locations (Wilmington NC and Lumberton NC) have already broken their all time yearly rainfall record. 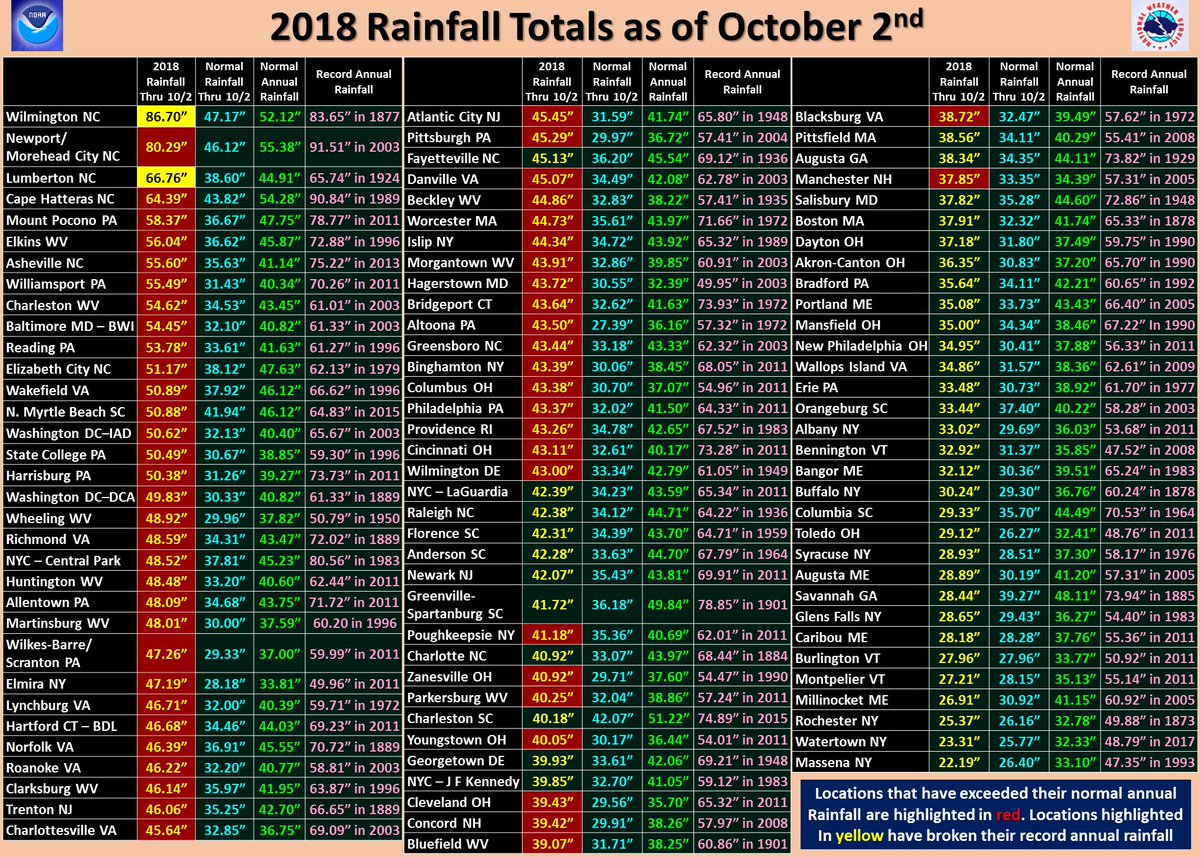 Fall will be in firm control across the northern Plains.
Here is some of today’s weather and climate news:

How much will sea levels rise by the end of the 21st Century? Here the most current broad-based, peer-reviewed scientific assessment, the 4th US National Assessment 2017. Worst case is 8 feet or 2.5 meters. Science has moved on since the last IPCC report! https://science2017.globalchange.gov/ 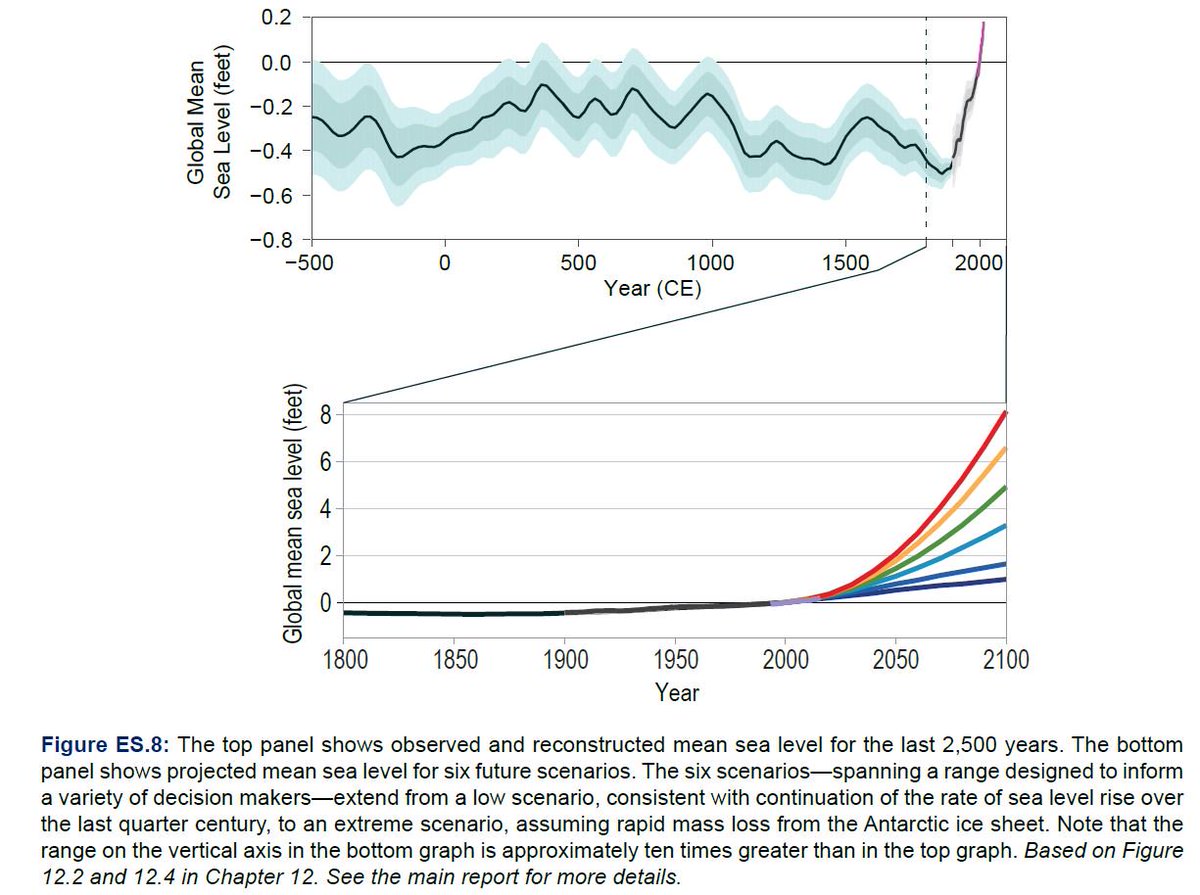 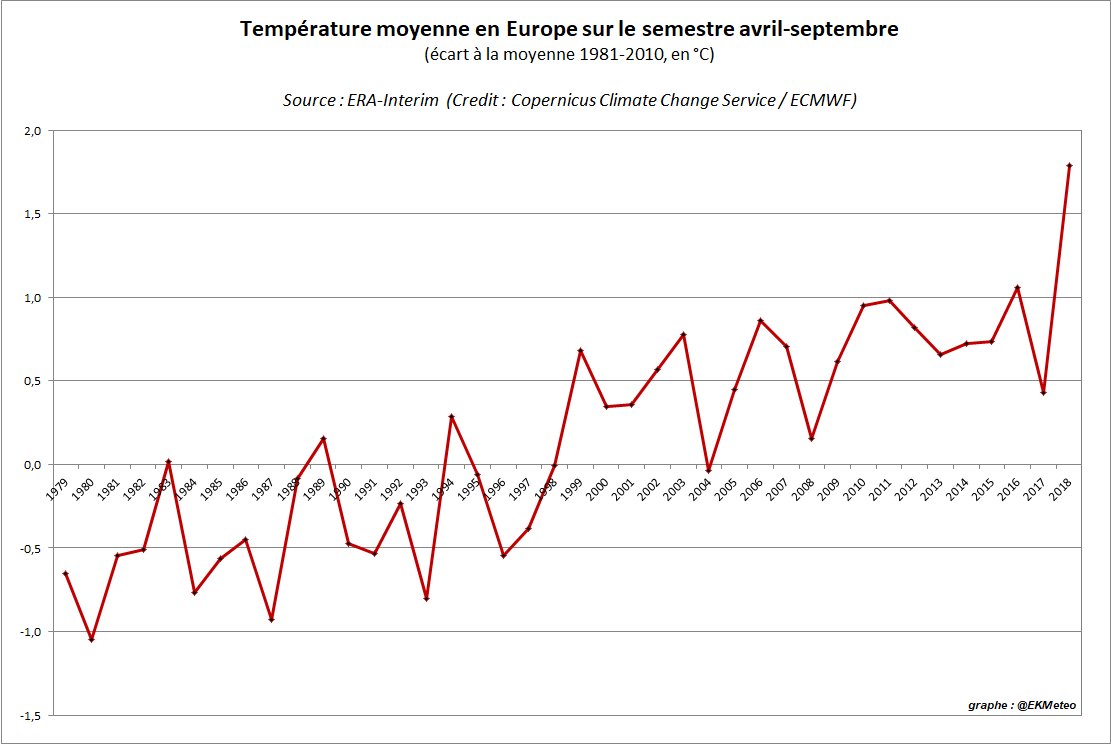 Today’s high temperature of 91 in #Atlanta ties the daily record for October 4th, which was set in 1954. Today and yesterday have been the first two days to reach 90 in Atlanta in October since 1954. #gawx

1:48 PM – 4 Oct 2018
We are still watching this too see what effects it will eventually have for the Gulf of Mexico:

A Central American Gyre (#CAG) has continued to sit and spin over Central America. Embedded within are multiple mesovorticies forming in response to active convection stretching incipient vorticity.

The system remains primarily a heavy rainfall producer in the short term. pic.twitter.com/L022X1R9oc