Friday October 5th… Dear Diary. The main purpose of this ongoing post will be to track United States extreme or record temperatures related to climate change. Any reports I see of ETs will be listed below the main topic of the day. I’ll refer to extreme or record temperatures as ETs (not extraterrestrials)😊.  Here is today’s main climate change related topic:

All Talk And No Walk From Kyoto To Paris…An Editorial

What has me fuming today is seeing many an article this week stating that it will take “a great effort” to keep global averages below +1.5C or +2.0C above preindustrial conditions. Ever since 1992 I have witnessed countless global “agreements” to limit CO2 pollution from Kyoto to Copenhagen to Paris in 2015 without many results. True, beginning this decade there have been great strides in green technology and infrastructure, but the planet keeps getting more hungry for energy negating most progress to reign in higher CO2 levels. Just take a gander at this site to see: https://www.co2.earth/

I keep seeing messages and dire warning such as this:

Over the last 150 years, humanity has emitted enough greenhouse gases into Earth’s atmosphere to bring carbon dioxide levels up to the highest they’ve been in 800,000 years. The planet is already warmer than it’s been in 120,000 years.

From October 2017 to October 2018 CO2 levels went from 402.96 ppm to 405.44 ppm, a net gain of  2.48 parts per million. From year to year since the turn of the century I am seeing about a 2.5 parts per million annual rise in CO2 levels in the atmosphere with very little deviation of the upward trend. Are we all fooling ourselves that any “weak”global treaties will make much of a difference?

In my life what I can’t stand from another soul is when they say they will commit to something and then not follow through. Starting with the Kyoto agreement for nearly thirty subsequent years I have heard promises that indeed emissions will be curtailed, and that individual countries will fall in line, policing industry such that concentrations of CO2 will level off and perhaps even fall. Beware of empty promises, especially when it comes to the world’s climate. Let’s see if this example of commitments is really serious and pans out: 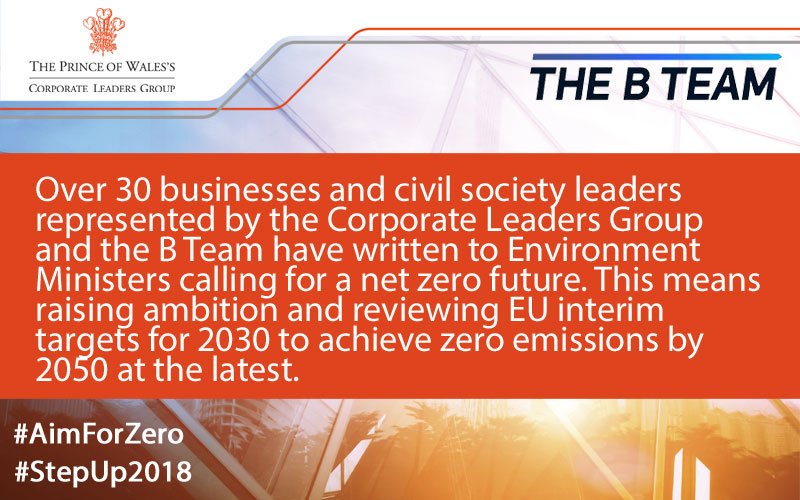 6:56 AM – 5 Oct 2018
Also, please read this thorough Washington Post piece on this subject:
https://www.washingtonpost.com/energy-environment/2018/10/03/climate-scientists-are-struggling-find-right-words-very-bad-news/?utm_term=.1b2936dda271
I’m going to quote one important point from the article:
“The pledges countries made during the Paris climate accord don’t get us anywhere close to what we have to do,” said Drew Shindell, a climate expert at Duke University and one of the authors of the IPCC report. “They haven’t really followed through with actions to reduce their emissions in any way commensurate with what they profess to be aiming for.”
Let me be trite here and state Yada, Yada, Yada. What I think is needed is some sort of harsh penalty for companies not coming in line with agreed upon goals from countries that do commit to Paris. For example, British Petroleum should get a stiff fine if they don’t transition to green energy per British government stipulations. That one big country, uhem, the United States, that doesn’t join Paris should see trade sanctions or other penalties. In other words, there should be compulsory discipline for bad behavior.
.    I hate to admit it about my species, but in most cases I see a lot of childish behavior from adults. Trust me, I have seen this in the workplace. This bad behavior collectively worms its way into all large organizations, such as energy companies. Greed and selfishness prevail in both the political world and in the private sector with not much thought for the future of children or grandchildren. As an aside, just look at the number of companies that want to profit from the use and distribution of poisonous chemicals causing sickness in children and birth defects. A child that is not behaving well needs to be corrected via some sort of punishment, or at least a carrot on a stick approach. This goes for adults, as well.
.    Greedy organizations may change their ways per the offer of more capital…the carrot and stick approach for corrective behavior. What if the United Nations or individual countries were to collect taxes or funds to be distributed to well behaving green energy corporations? This is just a thought, and don’t think for a second that I don’t know that corruption can come into play with such schemes. A world body, though, I’m afraid will need to become a world policeman as far as making sure that individual countries will adhere to their climate commitments. The human race is too childish to change otherwise.
.    Talk is cheap. Action via some sacrifice and sweat is hard. For those who are able, work hard within your own organization to both change any greedy culture for the good of us all.
……………………………………………………………………………………………
Tomorrow we will see one more day of near record heat across the Southeast:

Maxes were very close to daily records across the South. Fall is here to stay from the Northwest eastward through the Upper Midwest.

I’m getting more concerned that near record warmth across the South and East will lead to at least a tropical depression or storm moving into the Gulf of Mexico next week:

Odds are rising that a tropical cyclone will move across the Gulf of Mexico toward the central Gulf Coast next week https://bit.ly/2PlFA2M 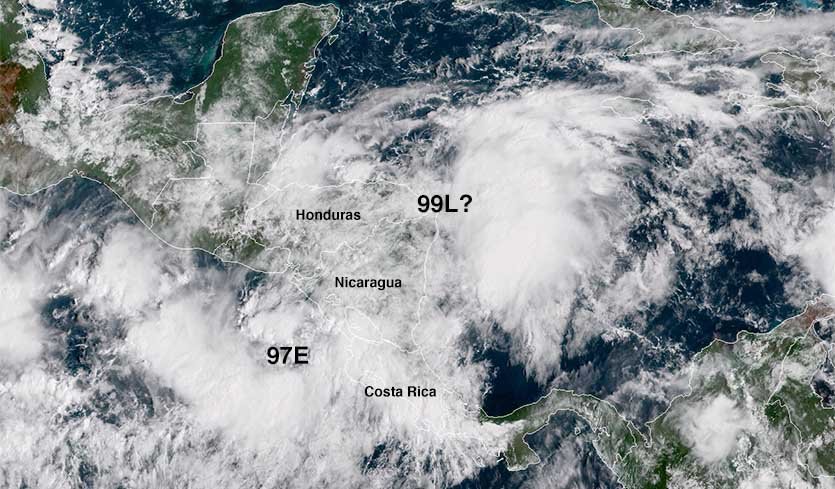 Am now greatly concerned that by early next week a tropical system will be moving into the Gulf. Yep, my 30+ years of experience are paying off, so all of my Twitter followers were informed first. Thanks for your support! @scook2214 @MichaelEMann @TheBradBlog @BernadetteWoods 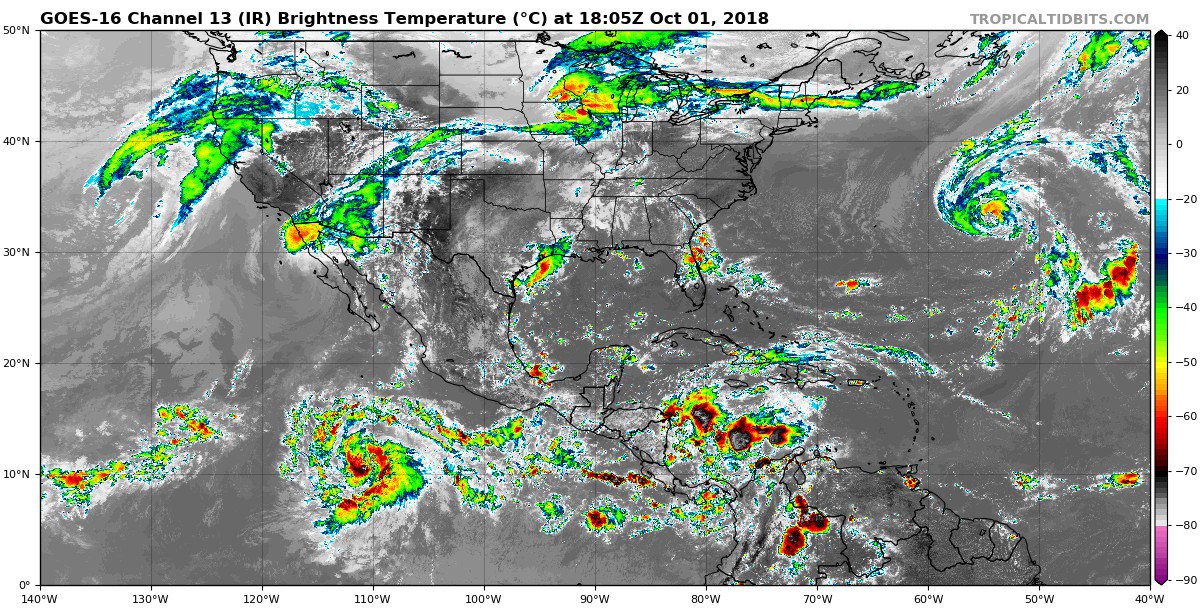 Guy Walton @climateguyw
Am a little concerned about the area of disturbed weather geographically about equal distant from #Leslie and #Sergio in the eastern Caribbean. Climatologically in October the Caribbean needs to be watched carefully.
9:19 AM – 5 Oct 2018

Models are starting to sniff out a potential developing tropical cyclone over the Gulf of Mexico next week. If a storm develops, there’s a high chance it would impact somewhere along the Gulf States. Follow the @NHC_Atlantic for daily updates on this potential storm. 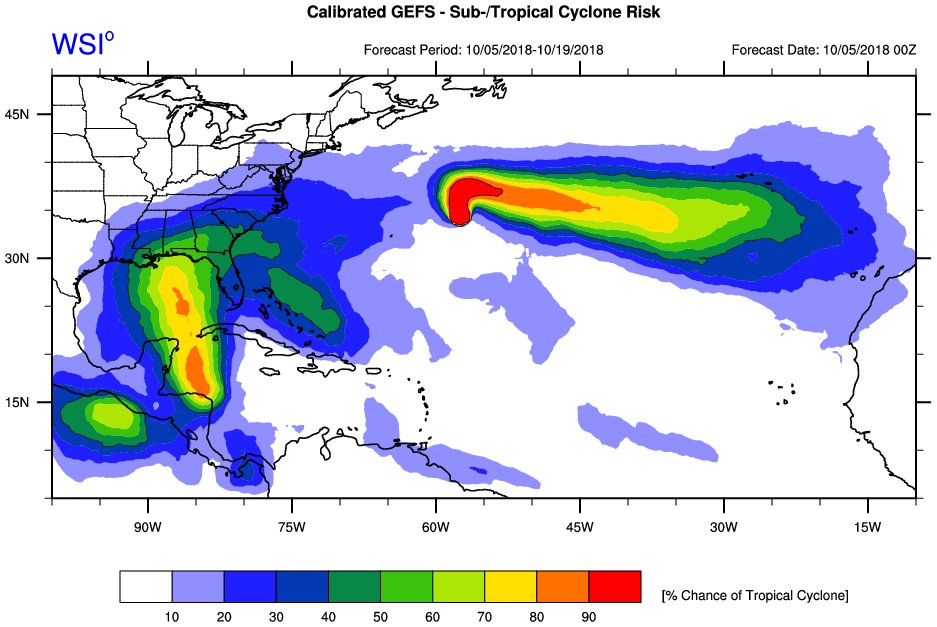 FV3-GFS model 10 day forecast W. Atlantic 10/5 12 pm
A T.D. forms SE of the Yucatan, becomes a T.S and moves North over the Gulf making landfall on Mississippi coast as a strong T.S.. It then moves NE over the SE U.S. as a subtropical storm and dissipates. pic.twitter.com/D6HFSwfOOa

The #Hurricane #Sergio forecast is most interesting for what its remnants may do late next week. https://wxch.nl/2NqlbI4 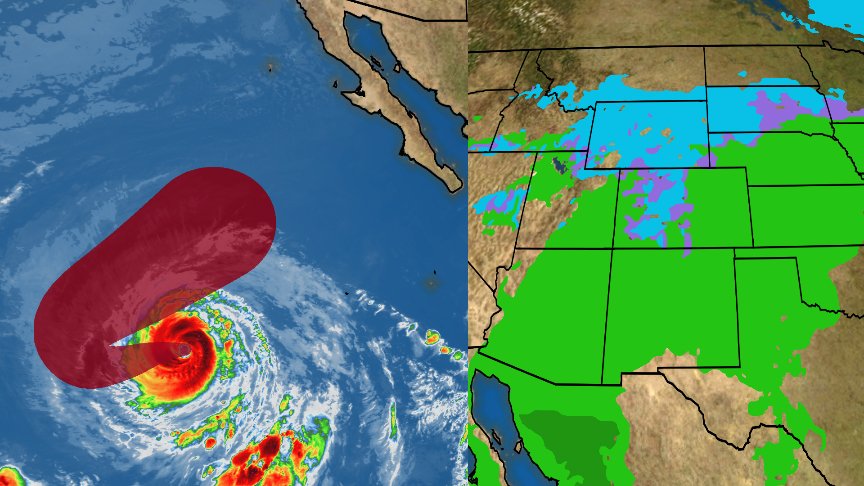 Possible double tropical trouble. #Sergio hits the Soutwest while what forms in the Gulf moves through the Southeast next week. 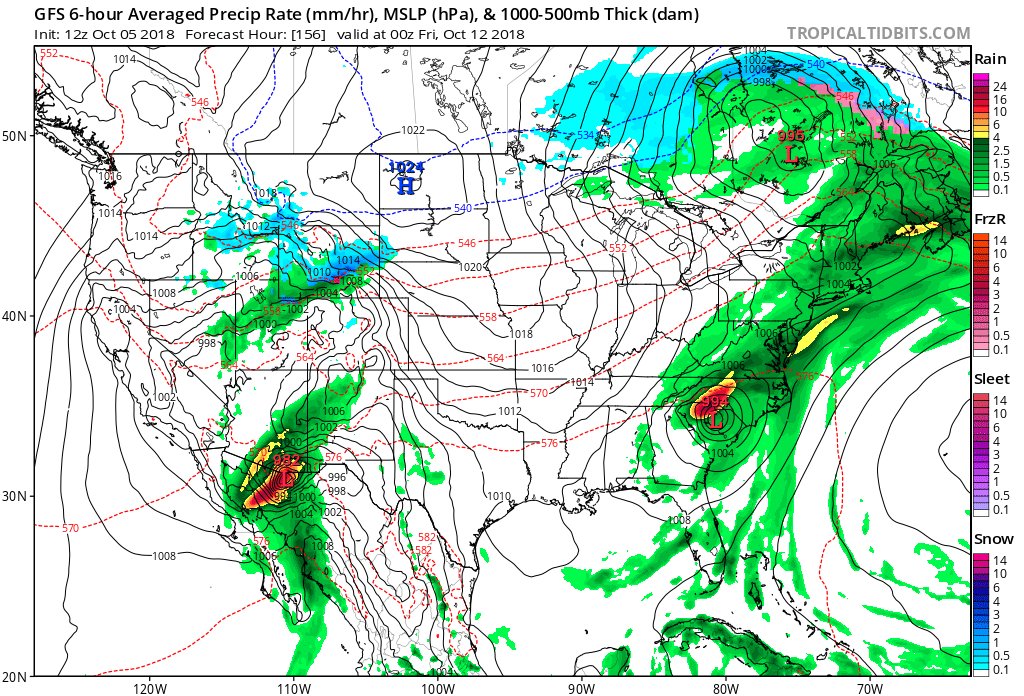 Here is some of today’s other weather and climate news:

We ought to be seeing more fall color by now, but many of us are still waiting for autumn to appear. Who’s going to see summer continue and who else is getting a taste of winter? Some answers: 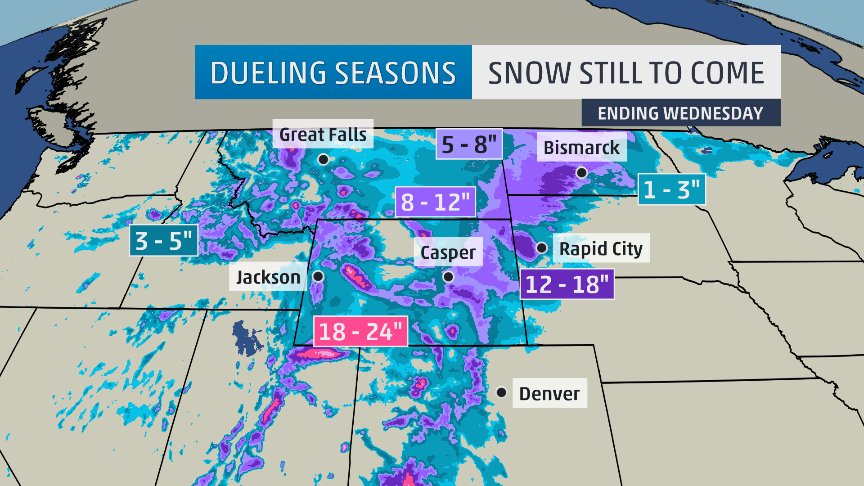 From the office. With NOAA data, we looked at the frequency of coastal flooding during king tide season at 30 U.S. sites – past and present. And the frequency of future flooding just from regular tidal cycles and sea level rise. See all 30 sites at: http://www.climatecentral.org/outreach/alert-archive/2018/2018KingTides-English-Dropdown-WEB.html … 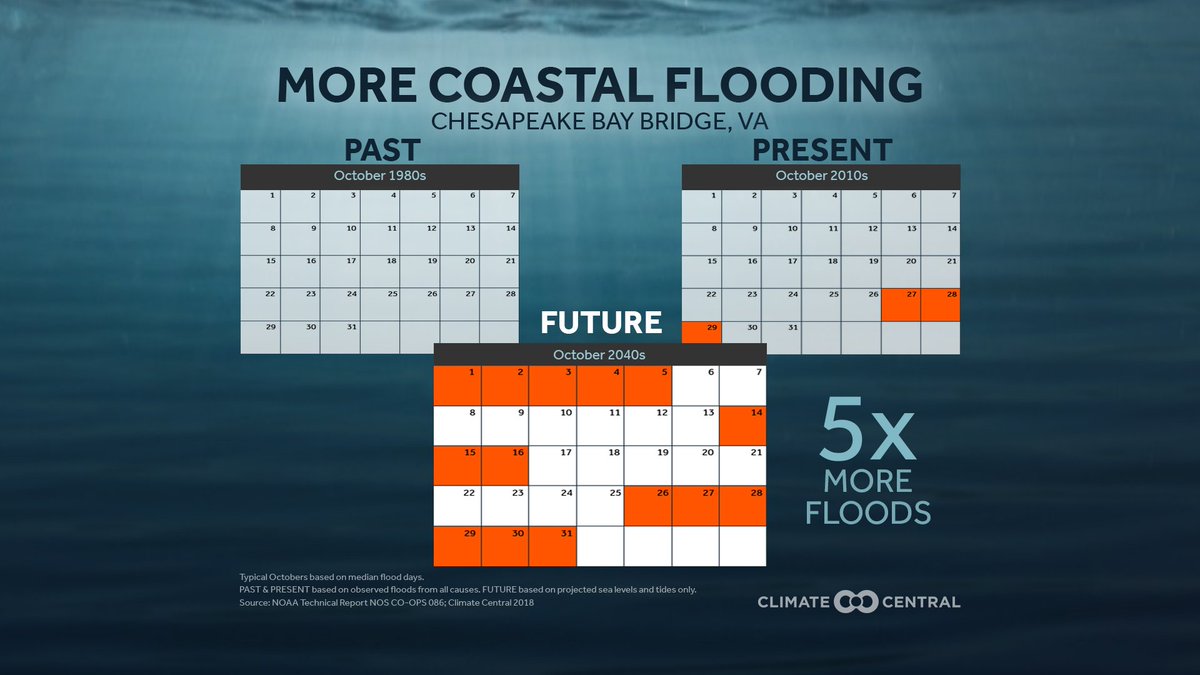 #Nome high temperature thru 2pm AKDT Friday is 50F (10C), making this the fifth day this month with a high of 50F or higher. In 110 years of climate obs, Nome has never had an October with this many days so warm. #akwx #Arctic @KNOMnews @lisashefguy @mdiaak54 @Climatologist49

Why is climate changing faster than feared?

Conservative models “failed to capture the full impacts of a warming planet on extreme weather events such as those that broke out across North America, Europe and Asia this summer,” @MichaelEMann  tells @AFP  http://ow.ly/Tlx430m7b43 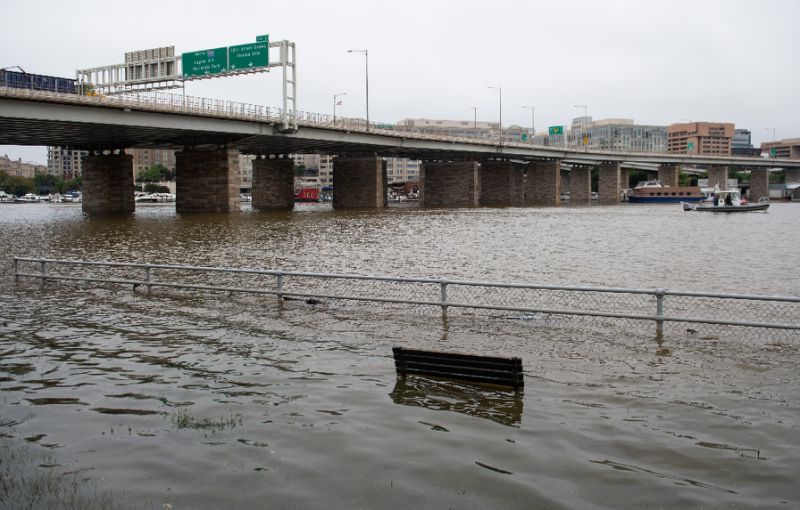