Admittedly, the subject of this post is the easiest to write about in quite some time but perhaps necessary given what we looked at yesterday:

Let’s pretend that we live in a different universe in which carbon was not a greenhouse gas, and that global warming was not a reason to go towards renewables. In fact, global warming was totally off the table, and the climate was very stable. (Wow! or so I wish.😃) It’s the year 2018, and in this pretend universe all other chemicals acted the same as in this one, and the level of tech is the same by us humanoids. Then what would be the reason or reasons for making at least a slow switch to solar and wind power? Plenty.

Let’s say that we have the same problems drilling and mining for brown energy in the pretend universe such as this, which I spied today:

NEW ORLEANS — An oil spill that has been quietly leaking millions of barrels into the Gulf of Mexico has gone unplugged for so long that it now verges on becoming one of the worst offshore disasters in U.S. history.

Between 300 and 700 barrels of oil per day have been spewing from a site 12 miles off the Louisiana coast since 2004, when an oil-production platform owned by Taylor Energy sank in a mudslide triggered by Hurricane Ivan. Many of the wells have not been capped, and federal officials estimate that the spill could continue through this century. With no fix in sight, the Taylor offshore spill is threatening to overtake BP’s Deepwater Horizon disaster as the largest ever.

My main point today is that both oil and coal are full of caustic chemicals that are not only unhealthy for humans but terrible for nature. Why else would oil companies get sued for not getting oil spills cleaned up fast enough? Why would Native Americans be protesting oil pipelines in North Dakota thinking that any spills would decimate their groundwater? All I have to do to answer these questions specifically and in detail is to refer to a scientific organization, such as NOAA. Let me do that: https://response.restoration.noaa.gov/about/media/toxicity-oil-whats-big-deal.html

We call something toxic if it harms living things. The amount of harm caused depends on how an organism is exposed and to how much oil. For example, crude oil is considered toxic and causes two main kinds of injury: physical and biochemical. The physical effects of freshly spilled crude oil are all too obvious. You’ve likely seen the disturbing images of birds and other animals coated in crude oil, struggling to survive. When oil washes ashore, it can completely cover and smother the plants and animals living there. Crude oil not only destroys the insulating properties of animal fur and bird feathers, which can lead to hypothermia, but it also impairs animals’ abilities to fly and swim, sometimes causing oiled animals to drown. During the months after the 1989 Exxon Valdez oil spill, researchers collected about 30,000 dead birds—ranging over 90 different species—from the oiled areas, and they estimated that perhaps ten times as many birds died. Spilled oil also can harm life because its chemical constituents are poisonous. As we previously learned, petroleum-derived oil is a complex mixture of thousands of chemical compounds. Given oil’s chemical complexity, we need to consider how these different components—and their very different effects on living things—cause harm.

Let’s look at two important components of crude oil: volatile organic compounds (VOCs) and polycyclic aromatic hydrocarbons (PAHs). In terms of how long they remain in the environment, they represent two ends of a spectrum.

All crude oil contains VOCs, which readily evaporate into the air, giving crude oil a distinctive odor. Some VOCs are acutely toxic when inhaled, in addition to being potentially cancer-causing. At the site of a fresh oil spill, these VOCs can threaten nearby residents, responders working on the spill, air-breathing marine mammals, and sea turtles at the water surface. However, VOCs are generally a response concern only right after oil is spilled, because oil floating on the sea surface quickly loses its VOCs.

In contrast, PAHs can persist in the environment for many years, in some cases continuing to harm organisms long after the oil first spills. How PAHs in oil do that is an active area of research.

For example, our colleagues at NOAA’s Auke Bay Laboratory near Juneau, Alaska, investigated the possible biological effects of oil that spilled from the Exxon Valdez in 1989 but still remains at very low concentrations in weathered oil in beach sediments at locations scattered around Prince William Sound.

The Auke Bay Lab researchers conducted a series of studies that continued for more than a decade. They found that even though the levels of PAHs leaching from weathered oil buried in beach sediments were very low, the PAHs still caused negative effects to incubating herring and salmon eggs. The good news from these studies is that over the years, the concentration of PAHs has declined in the Sound’s beach sediments, to the point that those particular toxic effects on fish eggs have diminished as well. However, at a few sites in the Sound, sea otters are eating clams that may continue to be contaminated by leaching PAHs in buried oil.

The Northwest Fisheries Science Center, another NOAA research laboratory in Seattle, Wash., has studied the chemical physiology of how PAHs harm developing fish. The researchers found that some PAHs in oil inhibit proper heart development in fish embryos, which can either kill the fish outright or make them more susceptible to predation and disease.

With so many varying factors coming into play, predicting the impacts of an oil spill can be quite challenging. It’s important to know the specific chemical makeup of an oil (and how that makeup changes over time as the oil weathers). This information will give us clues about how that oil will interact with organisms and the environment and, hopefully, will help us figure out how to keep those impacts low.

Now let’s look at good old clean coal going into the brown energy mix. Eek, there are so many toxic chemicals that I stumbled upon one top ten list alone:

Read this article to see what this nice little list of chemicals may do for your health. I guess you have heard of black lung by now:

Now, take a long look at this list. Would you want to be anywhere near this stuff, even breathing in some fumes while filing up at a gas station, if given alternatives? Of course not. It’s beyond me why oil and gas companies have gotten away with peddling their chemical wares since about 1980 given what we know about the toxicity of fossil fuels. Is the general public just dumb? No, just limited with inexpensive alternatives to transportation and powering homes just now coming onto market. Will the idea of burning fossil fuels for fuel itself become a fossil extinct or on the endangered list during the 21st century? I think so.

Well, it’s time to look at the toxicity of solar and wind power. Other than encountering perhaps some toxic materials for the manufacture and then disposal of old solar panels there aren’t that many problems with solar. Here are a few, though:

“In examining the challenges facing the solar industry it is important to keep in perspective the relative human and environmental impacts of different types of electricity generation. Even though there are toxic compounds used in the manufacturing of most solar panels, the generation of electricity from solar energy is significantly safer to the environment and workers than production of electricity from coal, natural gas, and nuclear fission. For example, once a solar panel is installed, it generates electricity with zero emissions whereas in 2010, coal-fired power plants in the United States emitted 1,999.6 million tons of carbon dioxide and there were 13,200 deaths in the U.S. directly attributable to particulates from coal-fired power plants.”

What about wind? The Union of Concerned Scientists, in which I am proud member, states the following:

“Harnessing the wind is one of the cleanest, most sustainable ways to generate electricity. Wind power produces no toxic emissions and none of the heat-trapping emissions that contribute to global warming. This, and the fact that wind power is one of the most abundant and increasingly cost-competitive energy resources, makes it a viable alternative to the fossil fuels that harm our health and threaten the environment.”

I am going to play devil’s advocate here, though, by stating that the manufacturing the components for both wind and solar do put some strain on the environment. Any major thing made by man to a certain extent does:

“Manufacturing wind turbines is a resource-intensive process. A typical wind turbine contains more than 8,000 different components, many of which are made from steel, cast iron, and concrete. One such component are magnets made from neodymium and dysprosium, rare earth minerals mined almost exclusively in China, which controls 95 percent of the world’s supply of rare earth minerals.”

O.K. I know I might get some flack for posting this last article, which some might say is “fake news,” but it does make sense that giant wind structures do take resources and energy itself to make. Still, to my knowledge people aren’t exposed to toxins in the manufacturing process. So, in conclusion, even in our alternative universe it would make sense to switch to renewables. Let’s do so in the real world.

Here is some weather and climate news from Monday:

From @Salon: “What will the world look like if we don’t stop #globalwarming?” @psumeteo @MichaelEMann weighs in. http://ow.ly/sJDv30mkESa

Guy have you seen this for damage in Georgia from Hurricane Michael: 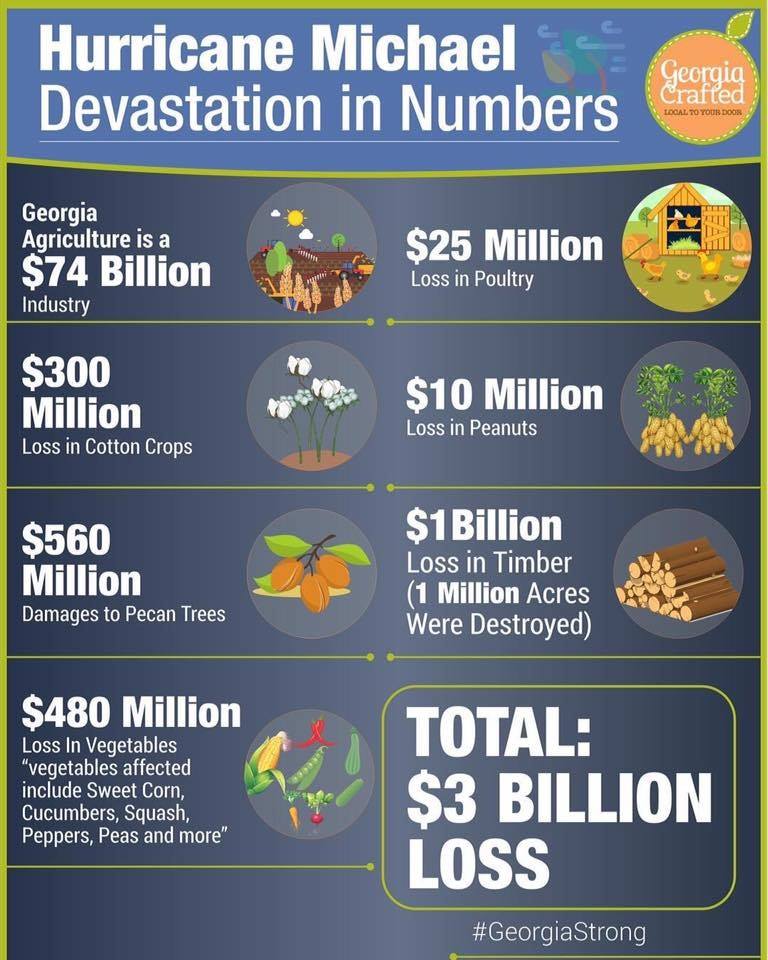