Today is Black Friday so most of us will be out and about becoming part of a relatively new part of American consumerism. Unfortunately this tradition just adds to carbon footprints, deepening the climate crisis a bit more with each passing Thanksgiving weekend. After shopping and family time I invite all to take a little time over this long weekend to read some of this new report, which I hope will not get buried under an avalanche of items vying for attention, but probably will. Basically Part l, which was released in 2017, is the underlying science whereas Part ll, which was released today, are projections for the future. Did the climate change unfriendly government purposely release this report on Black Friday to better bury the thing? I think so. In any case, here is what is catching the eye of climate scientists today:

Want the science behind how #climatechange is affecting the U.S.? Read Volume I of #NCA4, the Climate Science Special Report. It's also free to download: https://t.co/KwSP5wjDG6 pic.twitter.com/lH43OxPIPx

Here is the introduction and key quoted condensed highlights for Volume 1:

Global annually averaged surface air temperature has increased by about 1.8°F (1.0°C) over the last 115 years (1901–2016). This period is now the warmest in the history of modern civilization. The last few years have also seen record-breaking, climate-related weather extremes, and the last three years have been the warmest years on record for the globe. These trends are expected to continue over climate timescales.

This assessment concludes, based on extensive evidence, that it is extremely likely that human activities, especially emissions of greenhouse gases, are the dominant cause of the observed warming since the mid-20th century. For the warming over the last century, there is no convincing alternative explanation supported by the extent of the observational evidence.

For example, global average sea level has risen by about 7–8 inches since 1900, with almost half (about 3 inches) of that rise occurring since 1993. Human-caused climate change has made a substantial contribution to this rise since 1900, contributing to a rate of rise that is greater than during any preceding century in at least 2,800 years. Global sea level rise has already affected the United States; the incidence of daily tidal flooding is accelerating in more than 25 Atlantic and Gulf Coast cities.

Global average sea levels are expected to continue to rise—by at least several inches in the next 15 years and by 1–4 feet by 2100. A rise of as much as 8 feet by 2100 cannot be ruled out. Sea level rise will be higher than the global average on the East and Gulf Coasts of the United States.

Changes in the characteristics of extreme events are particularly important for human safety, infrastructure, agriculture, water quality and quantity, and natural ecosystems. Heavy rainfall is increasing in intensity and frequency across the United States and globally and is expected to continue to increase. The largest observed changes in the United States have occurred in the Northeast.

The incidence of large forest fires in the western United States and Alaska has increased since the early 1980s and is projected to further increase in those regions as the climate changes, with profound changes to regional ecosystems.

Annual trends toward earlier spring melt and reduced snowpack are already affecting water resources in the western United States and these trends are expected to continue. Under higher scenarios, and assuming no change to current water resources management, chronic, long-duration hydrological drought is increasingly possible before the end of this century.

The observed increase in carbon emissions over the past 15–20 years has been consistent with higher emissions pathways. In 2014 and 2015, emission growth rates slowed as economic growth became less carbon-intensive. Even if this slowing trend continues, however, it is not yet at a rate that would limit global average temperature change to well below 3.6°F (2°C) above preindustrial levels.

The last paragraph I posted is most alarming. Even though emission rates have slowed we as a species are on the path to commit to global warming of more than +2C above preindustrial conditions, our new “line in the sand” via recommendations from the Paris Accords.

Climate Central has made three new graphics encapsulating some of the information contained in the reports:

Of immediate relevance, the report quantifies the extent to which climate change has increased the area burned by wildfires in the last few decades. Questions? Ask fire expert @LeroyWesterling right here on twitter. #NationalClimateAssessment pic.twitter.com/X9j2ORSj5q

Volume 2 of the Fourth US National Climate Assessment was released this afternoon. Here’s why it’s so important (thread) – https://t.co/RqshR4JLf8

Unequivocal language in today's 4th Nat'l Climate Assessment. "Earth's climate is now changing faster than at any point in modern civilization" My 10 min. contribution to @CBSNews Ty for giving this story the time is deserves! https://t.co/hVS7BSPrDr @ClimateCentral @ColumbiaCS

#ClimateFriday glad to see media covering #NCA4 even though it was released on Black Friday…https://t.co/O3AJQIa8aX

The Trump administration tried to bury a new report about the devastating consequences of climate change.

Why? Because Trump's actions are actively making it worse.

Our task is clear. We must immediately and dramatically reduce carbon pollution emissions. https://t.co/4dhk4qUdzn

“It’s not that we care about a 1-degree increase in global temperature in the abstract,” she said. “We care about water, we care about food, we care about the economy—and every single one of those things is being affected by climate change today.” Katharine Hayhoe https://t.co/cWuYKqJteu

Please read the report in its entirety for details, but at around 1600 pages this will take some time. Remember, The Climate Guy is just the messenger for all climate scientists cited on this post. It’s up to all of us to heed the message.😉

Here is some of Friday’s other weather and climate news:

Yep. Everyone from Donald Trump to many in the general public get confused when record cold weather sets in across parts of the country about climate change. More chilly “ET” reports from this morning and Thanksgiving morning: 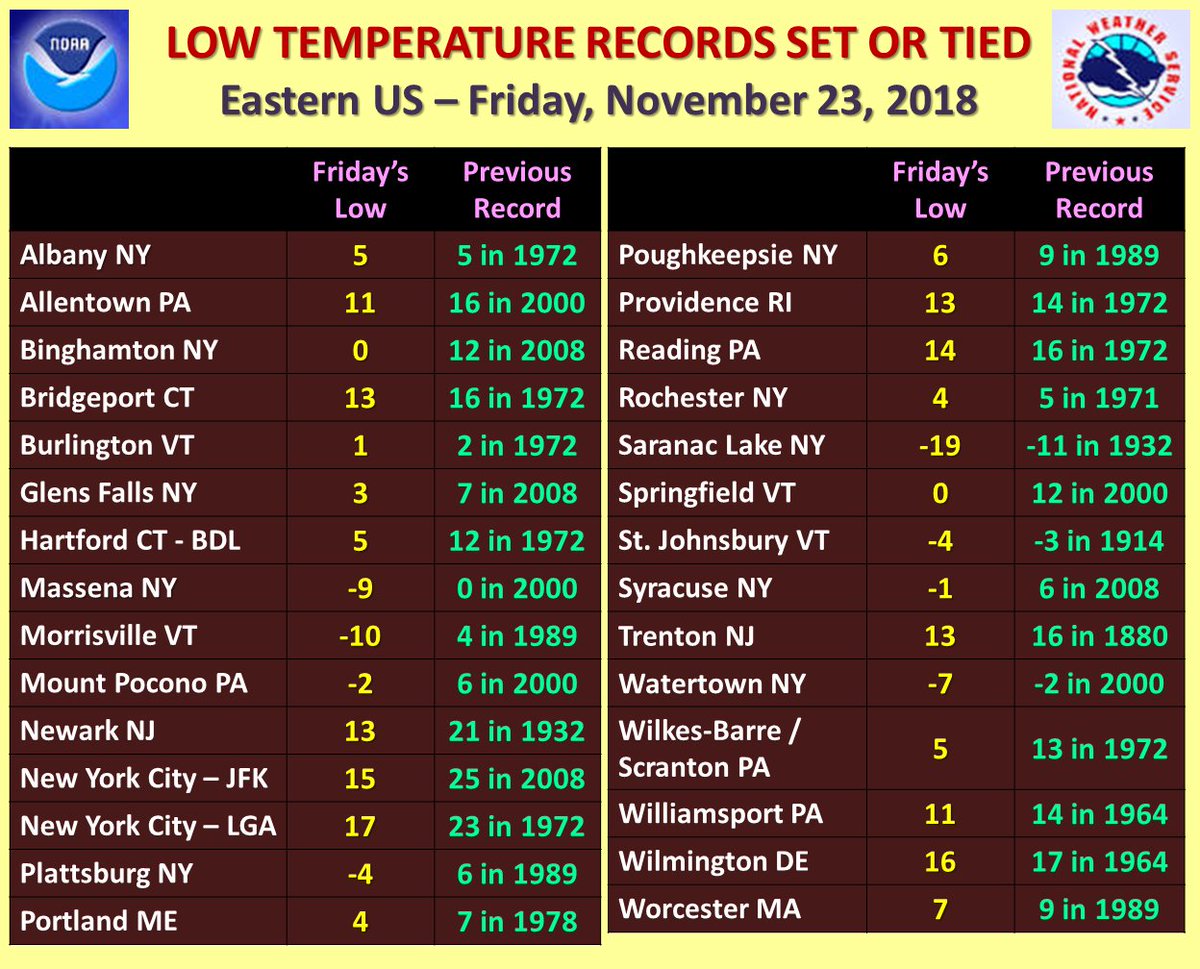 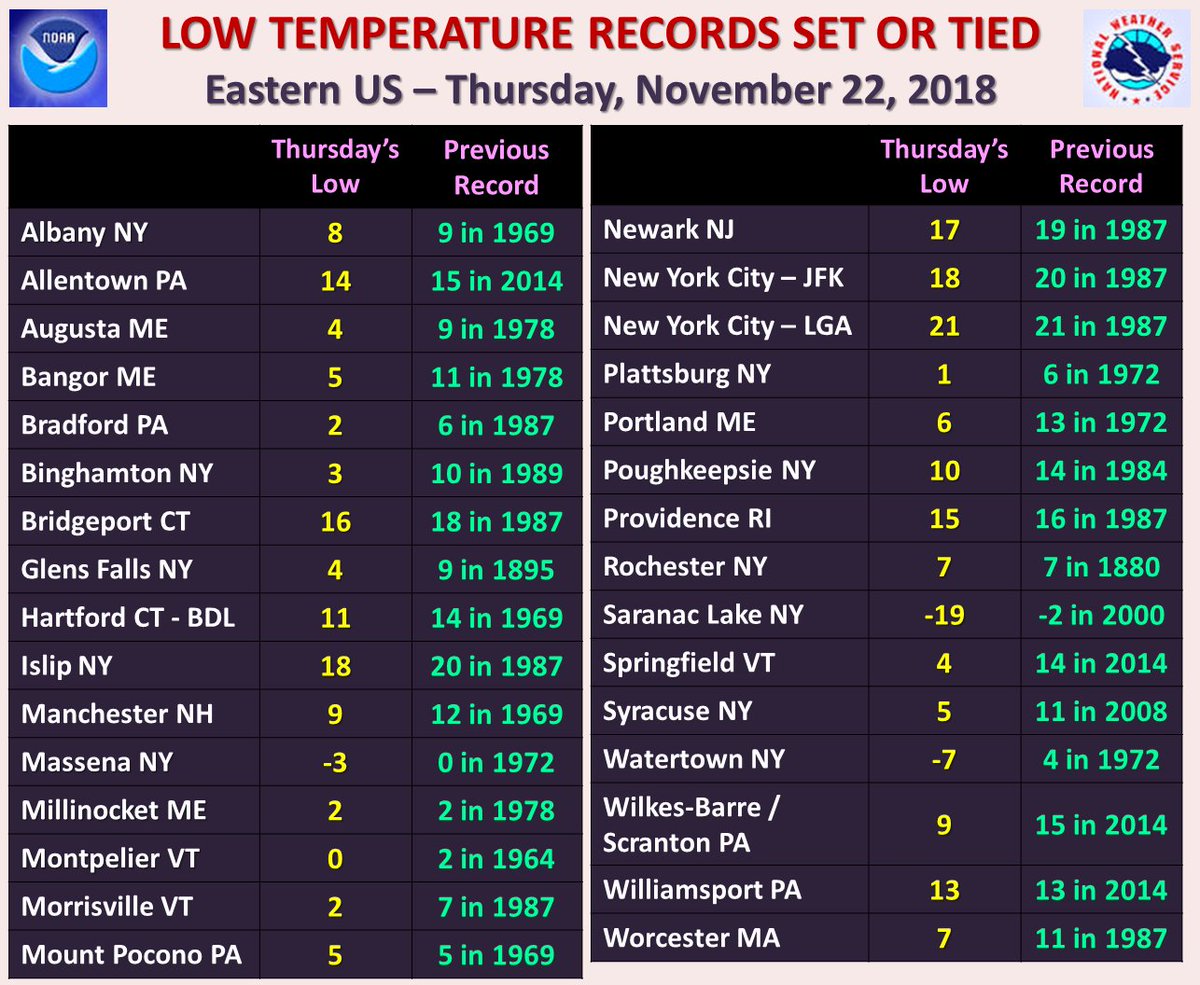