Main Topic: The Future Is Now…Tragic Displacement From Climate Change In Southern Asia

Dear Diary. About fifteen years ago I began to read articles forecasting big climate change related upheavals in southern Asia. Most were referring to sea level rise across a very low lying Bangladesh. Others pointed out water woes due to the melting of glaciers in the Himalayas. Some forecast deadly heat waves and flooding affecting India and from time to time the rest of the region. I also noticed an article or two forecasting more and stronger tropical activity across coastal areas. Looking at recent weather in southern Asia, unfortunately we must admit that the future is now.

Today we have a cyclone bearing down on coastal areas of northwest India, for example:

The following article goes into greater detail about what the people of southern Asia are contending with now. Notice that this recent article is not a forecast, which is a big change from most written during the 2010s:

In Asia, Millions Are Fleeing Climate Disasters With Little Promise of Relief

“For us, climate change is inescapable.”

This story is part of Covering Climate Now, a global journalism collaboration strengthening coverage of the climate story.

Growing up in Bangladesh’s sprawling capital of Dhaka, Farzana Faruk Jhumulearned about the country’s six distinct seasons, which bring varying levels of rain. Now 22, Jhumu said it is harder to feel the borders between seasons, which have been blurred by increasingly erratic rainstorms that regularly flood one of the world’s most crowded cities.

“Sometimes we make fun that Dhaka is not a city — it is a river,” said Jhumu, an activist with Fridays for Future Bangladesh, a climate advocacy group. “But it’s very tough for some people. Sudden and unpredictable rain is very painful.”

For the four million people living in Dhaka’s slums, heavy rains can mean flooded homes, contaminated water, and mosquito-borne diseases like malaria and dengue fever. And many of those people came to Dhaka precisely to escape floods, migrating from villages in the Ganges Delta that were swamped by heavy rains and swollen rivers. Dhaka’s Bhola slum is so named because many of its residents come from Bhola Island, which was dubbed “ground zero” for climate migrants more than a decade ago, after floods displaced so many people.

Since September, more than 10 million people, mostly across Asia and the Pacific, have been displaced by natural disasters, largely climate disasters, according to recently released data from the Internal Displacement Monitoring Center. From tropical cyclones in the South Pacific to mass floods in South Asia, climate disasters have become what aid organizations call a “push factor,” driving many of Asia’s poorest to migrate from rural areas to cities and towns in search of safety, which is never guaranteed.

“Often, the only option for people here is to migrate to places that are no better than before,” Jhumu said. “For us, climate change is inescapable.”

In September 2018, heavy rains caused the banks of Bangladesh’s Padma River to collapse. The resulting floods swallowed as many as 100 homes a day in the Shariatpur District, an area south of Dhaka. The event was outlined in a recent report from the International Federation of Red Cross and Red Crescent Societies that looks at instances of climate-related displacement in Asia.

Over the past half-century, an area roughly five times the size of Dhaka has been lost to riverbank erosion along to the Padma and Jamuna rivers, according to a 2018 report. Floods have created a migration pipeline from rural areas to the capital’s poorest neighborhoods, where displaced people continue to face floods. The report said that residents of urban slums have been hit especially hard by riverbank erosion.

“People might imagine that if your income goes up [and allows you to move] from a rural area to a city, that life will be better, yet that’s hardly the situation,” said Harjeet Singh, global climate lead for the international nonprofit ActionAid. “Most migrants end up living in areas prone to floods, or that don’t have basic services, and will once again have a very low quality of life.”

Across Asia, people displaced by climate disasters continue to be vulnerable to climate-related threats. In April 2020, Tropical Cyclone Harold, a category 5 storm fueled by unusually warm waters in the South Pacific, swept through Tonga, Fiji and Vanuatu. Harold displaced more than one in four people in Vanuatu, many of whom fled to more populated areas in search of shelter, according to the Red Cross and Red Crescent report. Because of widespread damage to evaluation centers, people took to sleeping outdoors on concrete slabs, where they were exposed to the elements. In the days and weeks after the storm, hot, wet conditions fueled a malaria outbreak.

In the spring of 2018, much of Afghanistan saw its worst drought in a decade. Communities in the north and west that are reliant on farming lost crops and livestock amid the dry spell, depriving growers of needed income while leading to severe food shortages across the country. The drought displaced more than 370,000 people, forcing many to flee to refugee camps on the outskirts of nearby cities in search of safety and work.

“These are very, very poor communities,” said Nasratullah Elham, an Afghan climate activist who recently moved to the United States. “When a family loses their livestock, they’ve pretty much lost everything.”

Roughly a year after the drought hit, heavy rains fell on Afghanistan, leading to flash flooding that damaged or destroyed homes in rural areas, as well as refugee camps, displacing some 42,000 people, according to the Red Cross and Red Crescent report. Both drought and floods are becoming more frequent and intense in Afghanistan.

“When people move to the cities, they usually don’t go back,” Elham said. “But most really can’t afford it and fall into poverty again, so it can be very, very tough.”

Elham grew up in a village in eastern Afghanistan, near the city of Jalalabad. He said that flash floods were common in the spring in his riverside village, but that floods have become more destructive over time, and that today they wash away entire homes and wheat fields, driving displacement.

“We might not be the main driver of climate change, but we are kind of the most affected,” Elham said. “We’re in an emergency state.”

Climate disasters are displacing some 20 million people each year, and more than 80 percent of those displaced come from the Asia Pacific Region, according to the Red Cross and Red Crescent report. That number is expected to grow as temperatures rise.

Even if countries limit warming to 2 degrees C, slow-onset climate disasters like sea level rise and drought will displace close to 34 million people in South Asian alone by 2050, according to a 2020 report from ActionAid. If countries only do what’s needed to keep warming to a little more than 3 degrees C, some 63 million South Asians could be displaced by mid-century.

“It’s a critical situation,” Singh said. “Unless we act, these numbers will go up dramatically.” 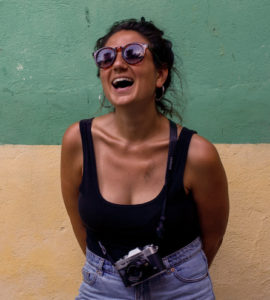 Alessandra Bergamin is an Australian freelance journalist based in Los Angeles. She has written for National Geographic, The New Yorker, The Lily and Harper’s Magazine, among others. She also produces Defender, a newsletter about environmental justice. Follow her on Instagram @allybergamin.

Here is more climate and weather news from Sunday: