Main Topic: After EPA vs. West VA…It’s Not Game Over for Our Climate Yet

Dear Diary. The climate world is still reeling from the Dobbs Supreme Court decision in which conservative justices ruled that the Environmental Protection Agency could not have total control regulating carbon pollution, essentially kicking the legs out of the organization. Many, including yours truly, seriously doubt that without central government control we can reign in carbon before our global carbon budget rubs out sometime by about 2030. So, as Dr. Michael Mann chastises us, should we throw up our hands, becoming doomists?

At least not yet. Not according to this new Los Angeles Times article, which is today’s main topic and focus of our attention:

This is the July 7, 2022, edition of Boiling Point, a weekly newsletter about climate change and the environment in California and the American West. Sign up here to get it in your inbox.

The Supreme Court’s conservative majority is pulling no punches. After eliminating the constitutional right to an abortion, limiting the separation of church and state and striking down concealed-carry gun laws in several states, the court’s Republican-appointed justices ended their term last week by chipping away at the federal government’s ability to fight the climate crisis.

You’ve almost certainly already heard the news; if not, my colleague David G. Savage wrote about the case. In a 6-3 decision, the court ruled the Environmental Protection Agency lacked authority for a broad Obama-era plan to slash planet-warming pollution, handing a victory to West Virginia and 17 other fossil-fuel-friendly states that sued to block the regulation.

Chief Justice John G. Roberts Jr. acknowledged in his majority opinion that EPA’s proposal may have been “a sensible solution to the crisis of the day.’” But a decision of “such magnitude and consequence,” he wrote, “rests with Congress itself.”

The odds of Congress passing sweeping climate legislation are not high. But even as global warming worsens wildfires, water shortages and heat storms, the Supreme Court ruling is far from “game over” for climate.

First and foremost, the Obama-era regulation that the high court struck down — known as the Clean Power Plan — was actually pretty weak. It would have required power companies to reduce emissions from electricity generation 32% below 2005 levels by 2030 — a goal the power industry met on its own a decade ahead of schedule, even though the Obama rule never took effect, as Benjamin Storrow notes in his coverage of the Supreme Court decision for E&E News.

That progress was driven by several factors: coal plants shutting down as increasingly low-cost solar and wind power put them out of business; activists campaigning to shut down polluting facilities in front-line communities; investors putting pressure on publicly traded companies to clean up their act; and state and local governments taking action to slash emissions. Those trends will continue, with state and city actions increasingly important in the wake of the Supreme Court ruling. As Cara Horowitz, co-executive director of UCLA’s Emmett Institute on Climate Change and the Environment, told my colleague Tony Briscoe, “Any time federal power to regulate climate change is constrained, state power gets more important.”

“California has always been a leader in the fight against climate change, and I expect that will continue and become even more crucial. States have a lot of regulatory power that this Supreme Court’s ruling does not touch,” Horowitz said.

As I wrote last week, the Golden State’s new plan for reducing fossil fuel use while keeping the lights on has drawn intense criticism from many environmentalists because it could keep gas-fired power plants in business, at least for a few more years. Newsom issued a “signing statement” clarifying his intent to prioritize clean energy, but that doesn’t have the force of law.

Then there’s the state’s oil and gas regulator, which continues to face questions over its ability — and willingness— to protect low-income communities of color from the health harms of fossil fuel extraction. The Desert Sun’s Janet Wilson reports that state inspectors in Kern County have been pressured to conduct many oil and gas safety checks from their desks rather than in the field, and to focus on wells clustered far from homes and schools to boost their numbers.

There are plenty of other places where clean energy advocates say the state is falling short. And it’s not just California. A new analysis from think tank RMI concludes that five other states seen as climate leaders — Colorado, Illinois, New Jersey, New York and Washington — don’t have policies in place that would cut carbon emissions in half by 2030, seen as a crucial midway point on the path to net-zero emissions by 2050, which scientists say is needed to avoid the worst consequences of global warming.

So states have an opportunity to step up on climate — if they choose to take it. 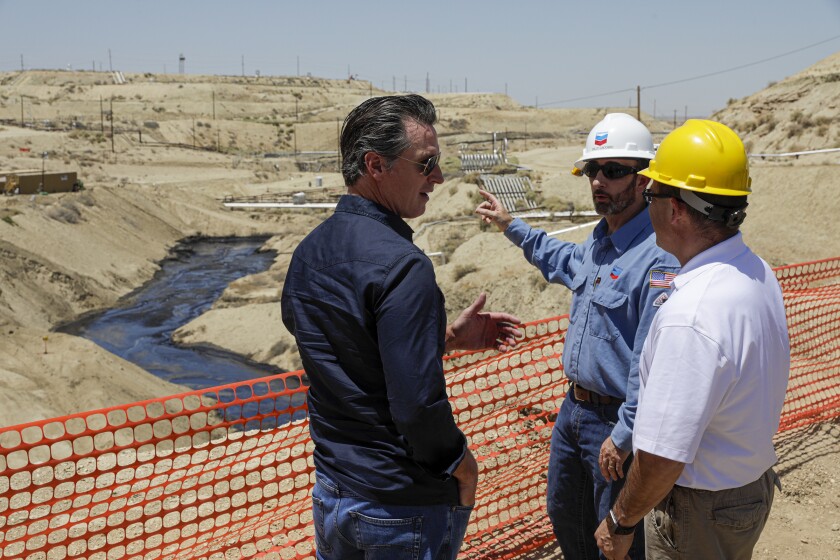 Meanwhile, it’s not like the federal government is completely out of commission. The infrastructure bill signed by President Biden last year committed tens of billions of dollars to support clean energy technologies, from electric cars to green hydrogen. And while a truly comprehensive climate bill isn’t currently in the cards, negotiations continue on a budget bill that could include significant incentives for solar and wind power (although its fate likely rests with coal-loving West Virginia Sen. Joe Manchin III).

There’s also all sorts of speculation about what the Supreme Court decision might mean for future climate regulations, and their ability to withstand judicial scrutiny. For a good rundown, see this piece from Marianne Lavelle at Inside Climate News.

But there’s no question the Biden administration has options. The Supreme Court didn’t entirely revoke EPA’s authority to regulate greenhouse gases, meaning the agency could try to limit emissions from coal and gas plants by requiring carbon capture systems, as David Iaconangelo, Niina H. Farah and Carlos Anchondo write for E&E News. The agency could also tighten restrictions on pollutants such as mercury and nitrogen oxides, which would have the side effect of reducing carbon dioxide.

Then there are public lands — a major source of U.S. oil, gas and coal. Biden campaigned on a pledge to end fossil fuel leasing on federal lands and waters. Although he hasn’t honored that pledge — partly due to a federal judge in Louisiana striking down Biden’s leasing pause last year — there are signs his administration is beginning to take it seriously.

The Interior Department’s new offshore drilling plan, for instance, could allow up to 11 oil and gas lease sales in the Gulf of Mexico and off Alaska — but it also preserves the option of zero lease sales, the Guardian’s Edward Helmore reports.

The Biden administration also downsized its first onshore oil and gas lease sale last week. The sale didn’t generate much industry interest, with a single parcel in Wyoming receiving $8.9 million of the $12.5 million in high bids, per Reuters’ Nichola Groom.

How far is the Biden administration willing to go to test the limits of climate regulation? Nobody knows. It’s possible the Supreme Court decision will spur Biden to more aggressive action. Or maybe he’ll keep holding back, especially if he thinks too much regulation would anger Manchin and stop him from supporting a budget with clean energy incentives. Many see that as a dangerous game, considering Manchin’s track record of blocking climate provisions in the failed “Build Back Better” bill.

One way or another, Congress will need to act eventually. Even before the Supreme Court ruling, limiting global warming to 2 degrees Celsius was going to be tough without coordinated action by the world’s biggest historic polluter, the United States.

Which brings us to the final point: The odds of significantly slowing climate change were already low before the Supreme Court threw another wrench in the works, and they’re still low now. That may sound like reason to despair, but to my mind, it’s a reminder not to give up hope. Accelerating the transition from fossil fuels to clean energy was always going to be hard, and it’s still going to be hard. Nothing fundamental about the climate fight changed last week. The uphill climb continues. A power boat is among the accumulated detritus that has been exposed as water levels drop at Lake Mead. (Luis Sinco / Los Angeles Times)

“It’s hard to stand in the heat. It’s hard to breathe. It’s hard to think.” So writes L.A. Times photographer Luis Sinco, who captured a dramatic series of images of Lake Mead, the West’s largest reservoir, where falling water levels have revealed sunken boats, dead bodies and other detritus. In California, extreme heat and aridification are permanently scarring the state and its social fabric, my colleague Hayley Smith writes, with many unknowns to come. For now, we’ve got the spectacle of more than 1 billion pounds of unsold almonds sitting in storage piles because there are no ships to take them overseas, as chronicled by The Times’ Louis Sahagún. We’ve also got entrepreneurs thriving — legally and illegally — in what Andrea Chang calls “the drought microeconomy.” Here’s her story on the Southern California businesses obtaining, conserving and in some cases stealing water.

Here are some “ET’s” reported from around the planet the last couple of days, their consequences, and some extreme temperature outlooks:

Here is some more June 2022 climatology:

(If you like these posts and my work please contribute via this site’s PayPal widget. Thanks in advance for any support.)