Sunday April 1st… Dear Diary. The main purpose of this ongoing post will be to track United States extreme or record temperatures related to climate change. Any reports I see of ETs will be listed below the main topic of the day. I’ll refer to extreme or record temperatures as ETs (not extraterrestrials)😊. Here is today’s main climate change related topic:

O.K. folks. I’m throwing up my hands surrendering to climate change contrarians today because it’s just not getting that much hotter this spring in the U.S. It’s as simple as this: It’s 2018, so by this time of the year, if some 1990s climate models were correct, we should be seeing maxes in my hometown of Atlanta near 90F, 100F in Dallas and 110F in Phoenix. Natural variations like sunspot cycles are melting polar ice and causing sea level rise. Systems are continuing to produce bands of snow fairly far south in the Midwest in late March:

April fools! Of course global climate change is occurring looking the totality of all  data coming from NCEI and NASA, and for that matter all  the information I’ve put on this site. The satellite photo is not fake, but my arguments in the first few sentences of this post are cherry picked garbage. We may not be seeing extreme temperatures as high as 100 in Dallas on April 1st, but we definitely see a warming trend since 1980. Speaking of cherry picking data, that is indeed what the 3% of remaining contrarian scientists have been doing according to this recent article:

I am breaking my own rules in this site since I stated on the debut post that the case for climate change is closed and I won’t rehash old arguments, but since it is April 1st, I need to present a couple of scientific arguments countering my initial little diatribe.☺ Quoting from the Quartz article:

It’s often said that of all the published scientific research on climate change, 97% of the papers conclude that global warming is real, problematic for the planet, and has been exacerbated by human activity.

But what about those 3% of papers that reach contrary conclusions? Some skeptics have suggested that the authors of studies indicating that climate change is not real, not harmful, or not man-made are bravely standing up for the truth, like maverick thinkers of the past. (Galileo is often invoked, though his fellow scientists mostly agreed with his conclusions—it was church leaders who tried to suppress them.)

Not so, according to a review published in the journal of Theoretical and Applied Climatology. The researchers tried to replicate the results of those 3% of papers—a common way to test scientific studies—and found biased, faulty results.

Katharine Hayhoe, an atmospheric scientist at Texas Tech University, worked with a team of researchers to look at the 38 papers published in peer-reviewed journals in the last decade that denied anthropogenic global warming.

“Every single one of those analyses had an error—in their assumptions, methodology, or analysis—that, when corrected, brought their results into line with the scientific consensus,” Hayhoe wrote in a Facebook post.

Broadly, there were three main errors in the papers denying climate change. Many had cherry-picked the results that conveniently supported their conclusion, while ignoring other context or records. Then there were some that applied inappropriate “curve-fitting”—in which they would step farther and farther away from data until the points matched the curve of their choosing.

And of course, sometimes the papers just ignored physics altogether. “In many cases, shortcomings are due to insufficient model evaluation, leading to results that are not universally valid but rather are an artifact of a particular experimental setup,” the authors write.

Those who assert that these papers are correct while the other 97% are wrong are holding up science where the researchers had already decided what results they sought, the authors of the review say. Good science is objective—it doesn’t care what anyone wants the answers to be.

I’ll add this statement from the linked Guardian article: You may have noticed another characteristic of contrarian climate research – there is no cohesive, consistent alternative theory to human-caused global warming. Some blame global warming on the sun, others on orbital cycles of other planets, others on ocean cycles, and so on. There is a 97% expert consensus on a cohesive theory that’s overwhelmingly supported by the scientific evidence, but the 2–3% of papers that reject that consensus are all over the map, even contradicting each other. The one thing they seem to have in common is methodological flaws like cherry picking, curve fitting, ignoring inconvenient data, and disregarding known physics. https://www.theguardian.com/environment/climate-consensus-97-per-cent/2015/aug/25/heres-what-happens-when-you-try-to-replicate-climate-contrarian-papers

Enough said or written. The 97% are correct, and the 3% are…..well you get the picture. In the next year I will endeavor to present material narrowing down both sea level rise projections and global warming land forecasts, since this is where any debate is left going forward through the 21st century.

Wow is it hot on the other side of the planet! 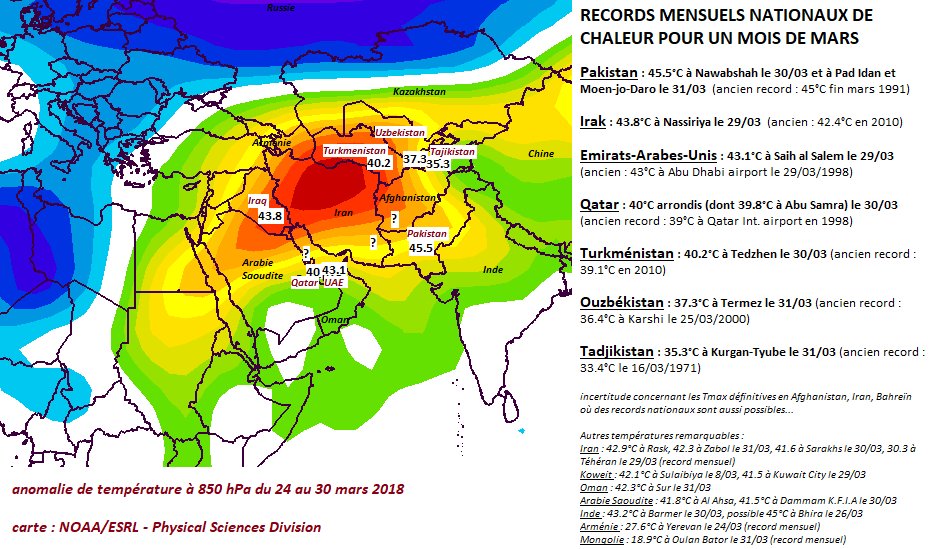 Have an excellent Easter weekend, everyone!