It was definitely the top climate news of the week with everybody and their mother writing articles or blogging  about NASA’s new findings about the rate of Antarctic ice loss. I don’t want this site to parrot others, but I would be remiss if I didn’t mention new Antarctic assessments, which we will put in the old “how soon how bad” file. After reading some of the myriad pieces on the subject, which one can easily Google, I’ll just refer to this one article:

“Antarctica’s ice sheet is melting at a rapidly increasing rate, now pouring more than 200 billion tons of ice into the ocean annually and raising sea levels a half-millimeter every year, a team of 80 scientists reported Wednesday.”

“The melt rate has tripled in the past decade, the study concluded. If the acceleration continues, some of scientists’ worst fears about rising oceans could be realized, leaving low-lying cities and communities with less time to prepare than they had hoped.”

Ever since I started following the climate issue the hot summer in which Dr. James Hansen gave his testimony before Congress in 1988 each progressive study thereafter has shortened the time which the planet’s populace must act to stabilize our biosphere. Back around 1990 I thought that Arctic and Antarctic ice decimation leading to civilization threatening sea level rise was centuries away. Maybe I too am in denial along with a few other climate gurus thinking that wholescale mitigation the next couple of decades will prevent catastrophic sea level rise. Maybe all efforts are too late, and most tipping points have already been tripped. Certainly when I read reports like the big one from this week I’m thinking more and more that all hope is lost.

What I do know is that the more additional carbon is dumped into the atmosphere the hotter the planet will get, and thus the worse future environmental problems will be for subsequent generations. What if all major coastal cities are eventually swamped in the next hundred years? Certainly there is room to adapt, pulling away from the coast. What may not be too adaptable is if the planet’s average temperature gets up to say +3, 4, 5C or higher such that some typically torrid areas today are eventually too hot for human life to exist.

So, even if the consensus among climate scientists the next few years determines that the environmental Titanic will sink, keep up the good fight against carbon pollution. Your progeny will thank you.

In first 1/2 of June, the U.S. has been generally drier than average, with the exception of a swath from North Dakota across to the DelMarVa region. The desert southwest is living up to its name, and after a drenching May, Florida has been fairly dry. Latest #drought map inset. 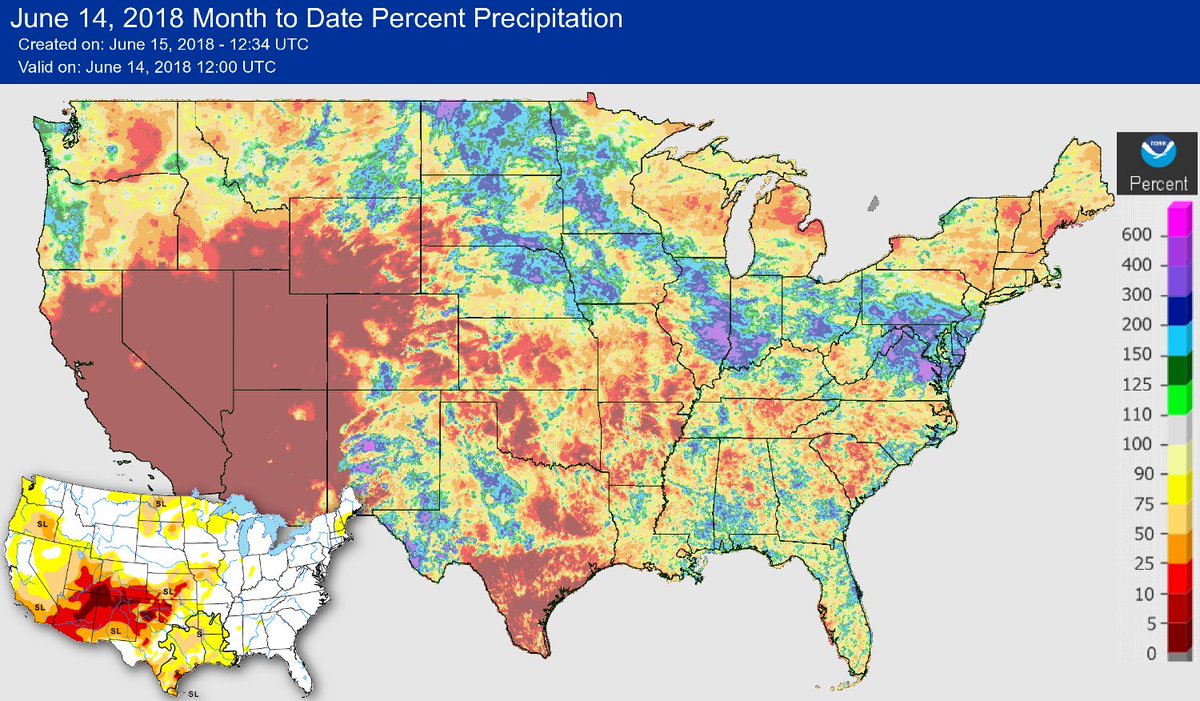 5:52 AM – 15 Jun 2018
Advisories for the current heatwave have expanded in the Midwest. We are also seeing the wild combo of fire and flood scenarios simultaneously taking place in the Southwest:

Saturday marginally dangerous heat will be prevalent across much of the nation with the core of the worst conditions remaining over the mid Mississippi Valley:

Moisture streaming northward from what was Bud will cool the four corners states. Phoenix may fail to reach 90F.

For many people, over 100 million in fact, tomorrow is going to be downright sultry outside. 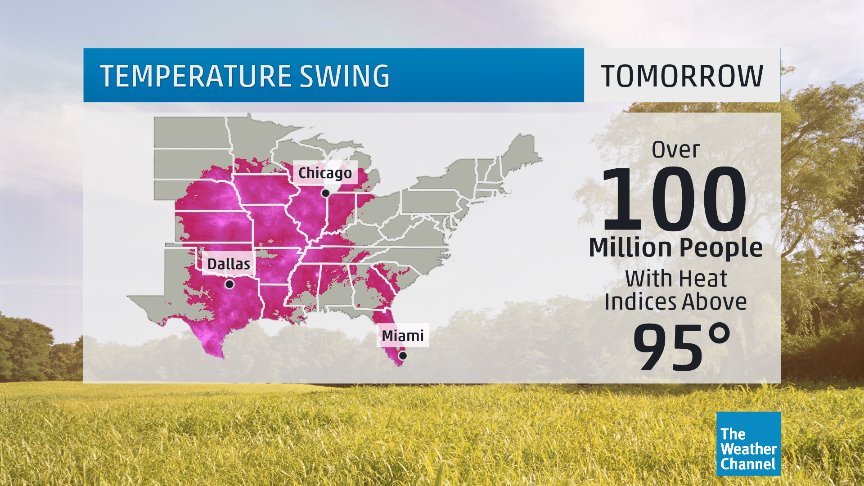 Temperatures made it into the low 100s across a large part of the central Plains today.