Just like last year I obviously am doing a blow by blow, play by play of a very significant heat even for the United States. To recap day one I’ll repost yesterday’s maxes:

The most impressive reading from major cities on Thursday was Denver at 105F tying their all-time record maximum.

Heat advisories are starting to appear in New York State and Vermont, and the area of excessive heat warnings is growing in the Midwest:

Today and tomorrow near record heat will be pulled north and then east such that just about all major large cities from the Midwest into the Northeast will see temperatures at dangerously high levels:

The front pulling heat north and east will cool off Minneapolis. Denver will be some twenty five degrees cooler than Thursday by Saturday.

People are starting to note that this heat wave will be very long lived:

The upcoming heat wave across the Northeast won’t be especially noteworthy for it’s temperature (it’s been hotter), but for it’s duration.

Over a week of 90°+ days could be in the cards. Some spots will approach their record for consecutive 90° days.

Heat indices forecast to push 110F in #Chicago tomorrow (Saturday) and nearing 100F into northern Michigan & Wisconsin. Not ideal heading into July 4 and lots of people outside.

This isn’t an unprecedented event by any means, but it doesn’t mean the risk is low. Stay hydrated! 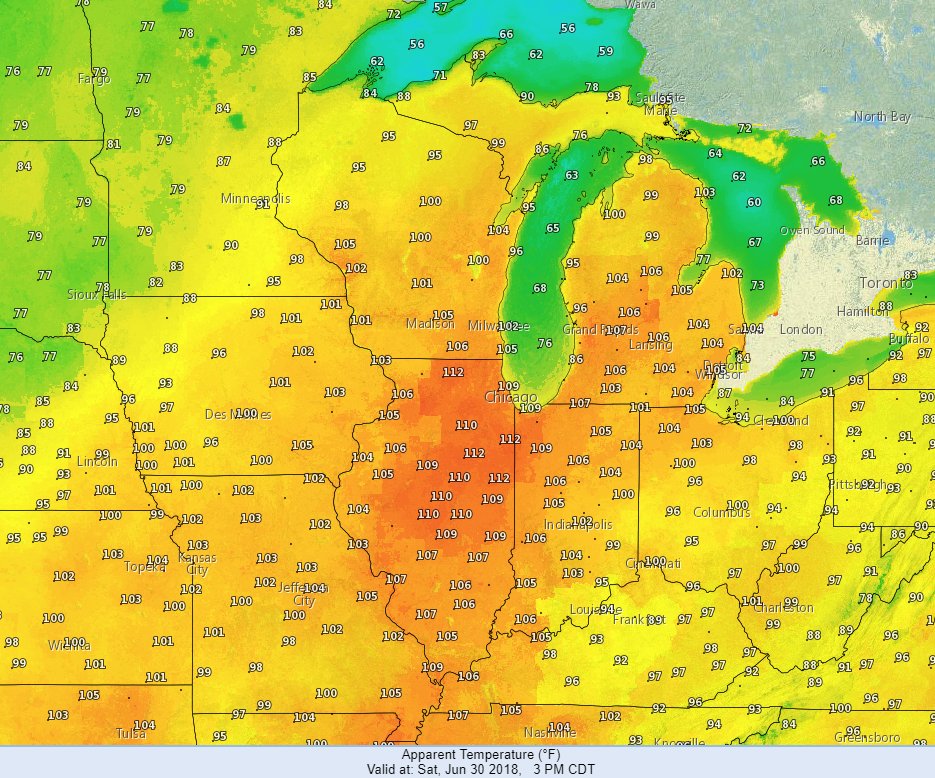 Scorching, long-duration heat wave to roast much of U.S. At least 50% of the lower 48 to see temperatures above 90F during this event. Not worst ever by any means, but it’s gonna feel nasty, and no relief anytime soon for millions. https://www.axios.com/scorching-heat-wave-hits-us-millions-affected-20cda585-2f74-4bd4-8aed-d3826d2c4126.html… 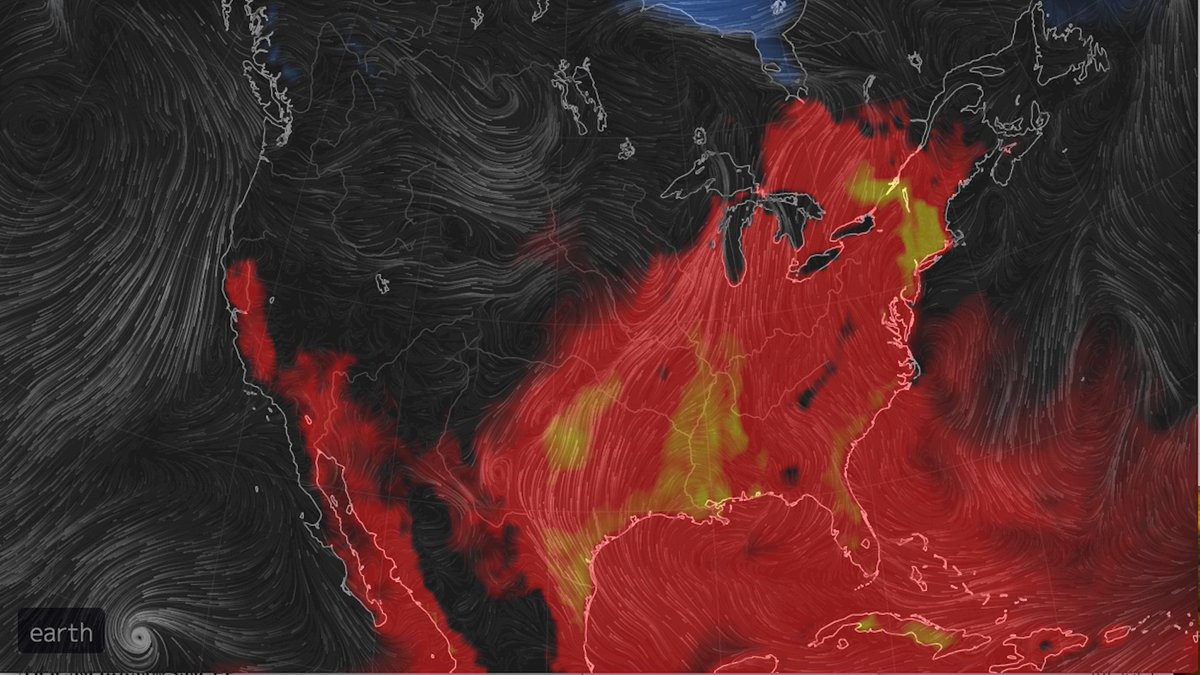 Saturday is forecast to be the warmest June day on record in #Toronto: 37°C. #TOWx 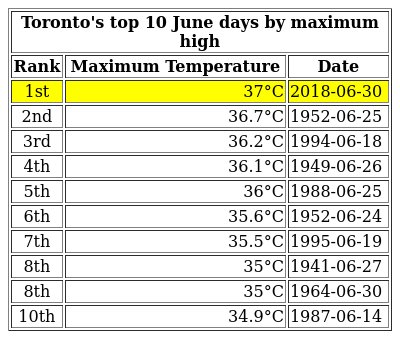 9:09 AM – 28 Jun 2018
Models are trending lower on the forecast maximum 500 millibar height in association with this heat episode, but not on the extent of geography covered by the ridge by July 6th (the day that the operational GFS had a 603 decameter ridge over Colorado from the 00Z WED model run):

………………………………………………………………….
Dear Diary. This evening I noticed that Bob Henson had a great write up on the beginning of this historic heat wave on Category 6:
https://www.wunderground.com/cat6/Denver-Matches-All-Time-High-105F-Heat-Spreads-East-Weekend
Quoting here is the big “ET” report from this post:
“The dome of heat building into the Northeast U.S. gripped the Rockies on Thursday. Denver’s high of 105°F on Thursday matched its all-time high in data going back to 1872. The other dates that saw 105°F in Denver were June 25 and 26, 2012; July 20, 2005; and Aug. 8, 1878. Two other nearby cities set daily records that came within 1°F of their all-time highs: Colorado Springs, CO (100°F) and Cheyenne, WY (99°F). Amid the intense heat, a wildfire in the Sangre de Cristo range of southern Colorado surged to envelop more than 14,000 acres by Friday morning, closing a major travel route (U.S. Highway 160).”
“All-time heat records will be a bit less likely across the central and eastern U.S., but many daily record highs and record-warm minimums can be expected. Triple-digit highs aren’t out of the question by Sunday in upstate New York, where such readings are very uncommon. The last time Albany, NY, got up to 100°F was on Sept. 3, 1953.”
This evening the area of NWS heat advisories has expanded in the Northeast. This is the first time I have ever seen all of Lower Michigan in a excessive heat warning:

Little reprieve in the heat will be seen tonight and Sat Night. This is especially true for the #Chicago urban heat island. For city of Chicago residents, call 311 or visit this link for heat and cooling center information: http://cityofchicago.org/city/en/depts/ … 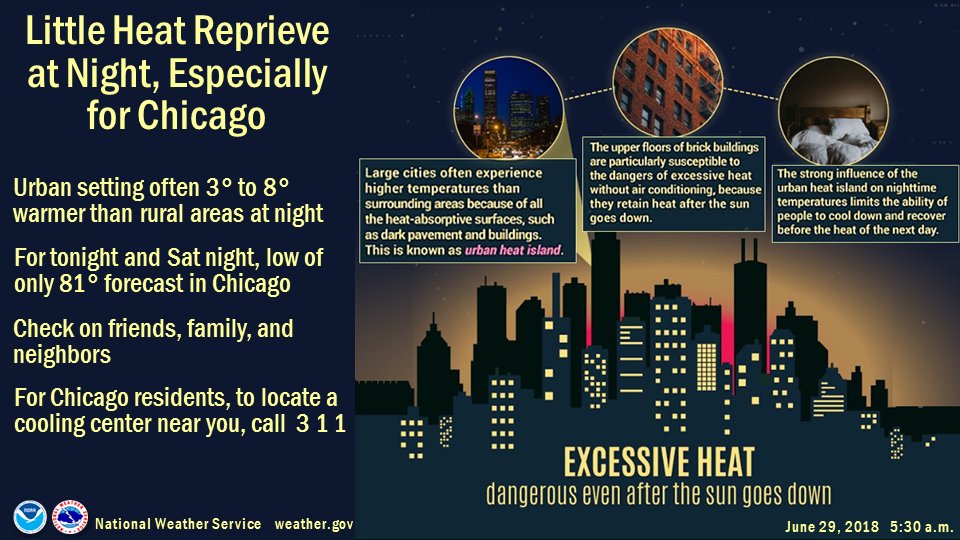 The heat was really in today in the Plains. Minneapolis nearly made the century mark. Denver “cooled” to a high of 97F. Nineties from this heat wave made their first appearance in the Megalopolis area.

The temperature in Chicago is still near 90 degrees at 9 pm this evening with heat indices between 100 and 105. Heat indices in the heart of the city of Chicago may not drop below 100 degrees until midnight. It’s this extreme nighttime heat that poses the biggest health dangers. 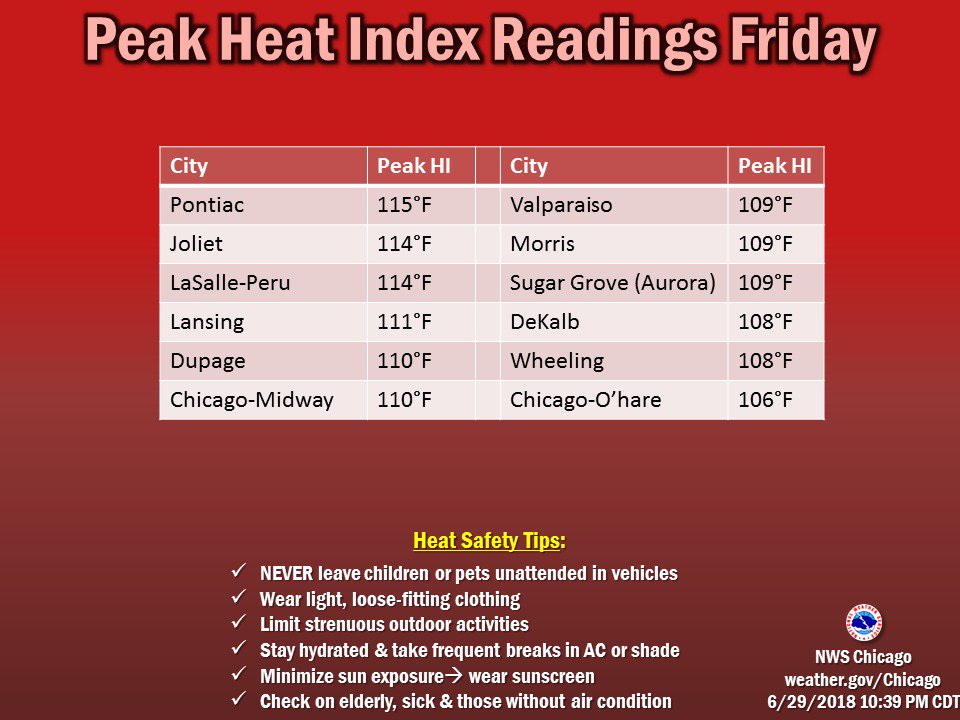