Sunday September 9th… Dear Diary. The main purpose of this ongoing post will be to track United States extreme or record temperatures related to climate change. Any reports I see of ETs will be listed below the main topic of the day. I’ll refer to extreme or record temperatures as ETs (not extraterrestrials)😊.  Here is today’s main climate change related topic:

Florence will dominate the news for the foreseeable future, so until this system plays out I will cover the thing. What I will do on this site is emphasize any attributable factors to climate change with Florence as we continue to log the system’s development and impacts. I’m not going  to second guess the National Hurricane Center, the best and most trusted source, unless guidance greatly deviates from their forecasts. Usually if models go in a different direction NHC will make adjustments. I will snapshot model scenarios, but all reading this post should follow NHC as presented by The Weather Channel to get the best forecast. Also, starting today I will group information in this fluid post under each six hour period in which model guidance is processed. The latest guidance will be at the beginning of the article with archived prior messages kept towards the end of Sunday’s Diary. I’ll label each group with the time models are processed. So here we go:

Information coming in after the 00Z Monday models from 9/10/2018 were processed:

Tonight’s operational EURO model is trending further south and west with #HurricaneFlorence putting South Carolina into play. This storm oh so reminds me of #HurricaneHugo that I chased and manage to get into its eye in 1989 at Charleston. What a ride! 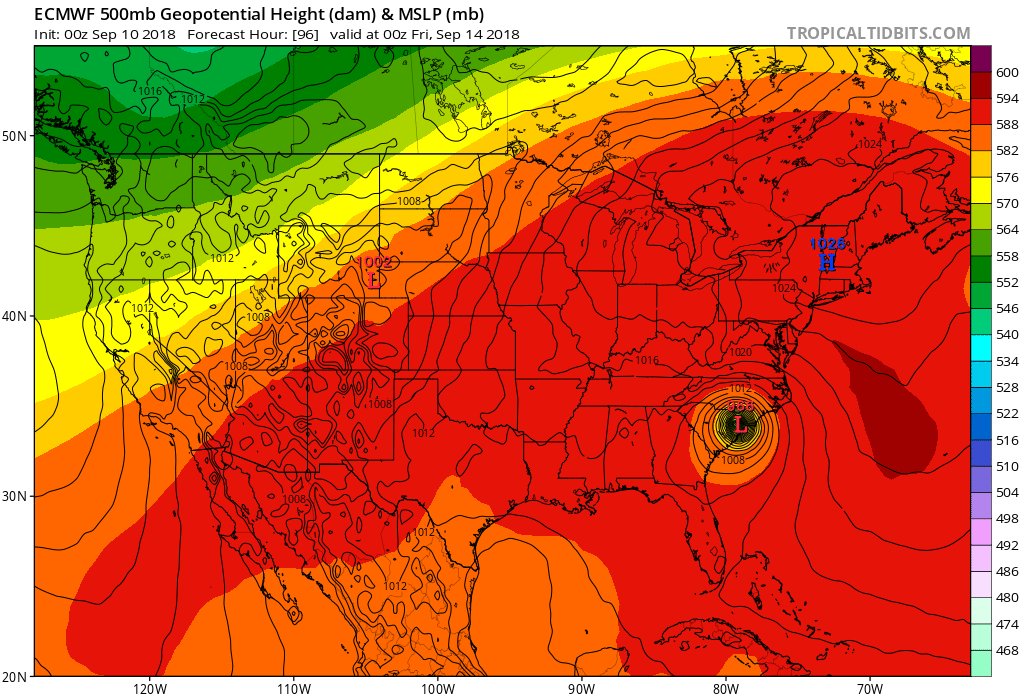 Models are coming into better agreement. 00Z MON GFS tracks cat 4 #Florence further south & inland than that of the 18Z GFS devastating  eastern North Carolina and SE Virginia, then stalling inland. This run we have the #Harvey scenario of extreme #flooding at RDU up through ORF. 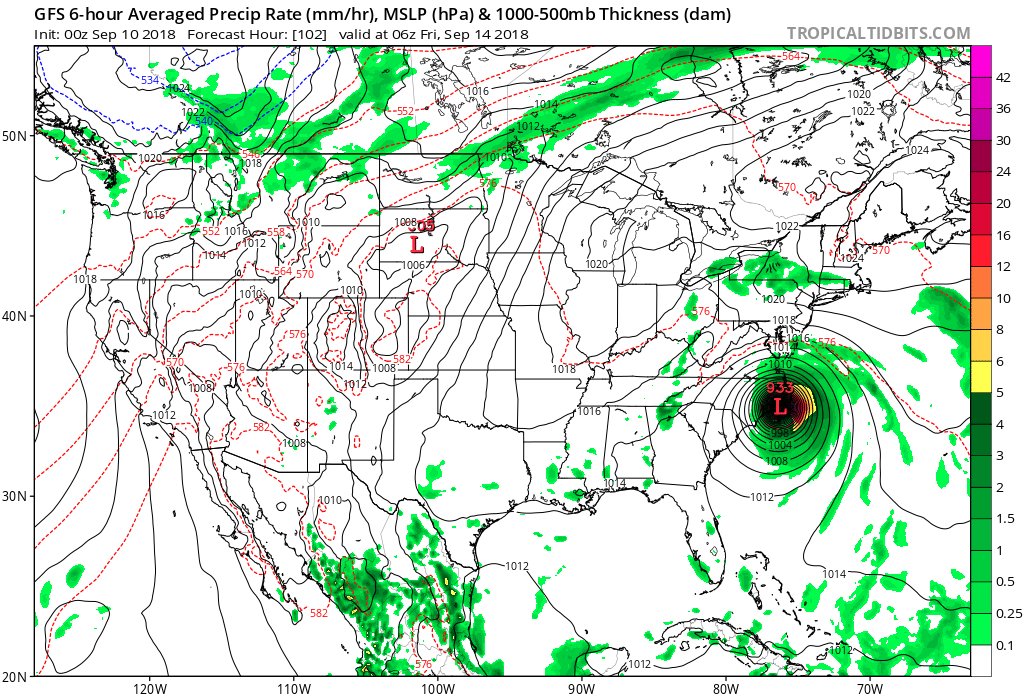 Hurricane Florence GFS model 10 day forecast 12 am EST. High pressure building off Africa initial steers Florence to the WNW. A strong high pressure ridge coming off the N East coast dips down behind Florence from a low pressure trough in the E Central Atlantic and👇👇 pic.twitter.com/LqGZ5zNsfr

Information coming in after the 18Z Sunday models from 9/9/2018 were processed:

If the latest NHC forecast comes to pass, #Florence will be the only hurricane on record to make a Cat 4 U.S. landfall so far north. The dramatic slowing on Friday, and the implied risk of extreme rainfall, is the other very concerning detail on this map. http://www.nhc.noaa.gov 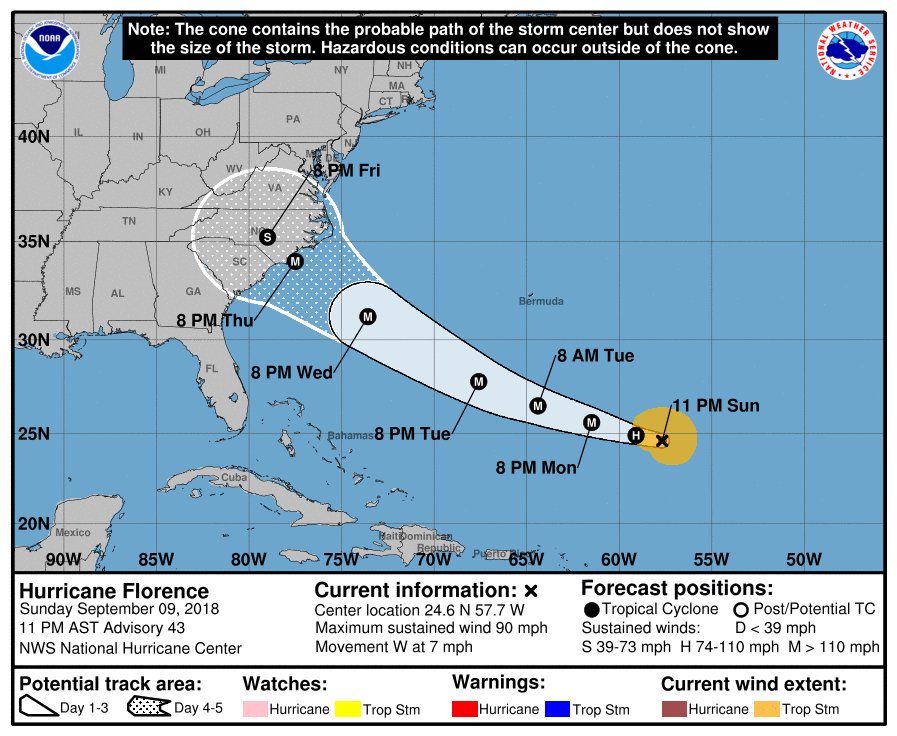 The last time we had three simultaneous hurricanes? 366 days ago (8 September 2017).
Once again weather loves #DejaVu. 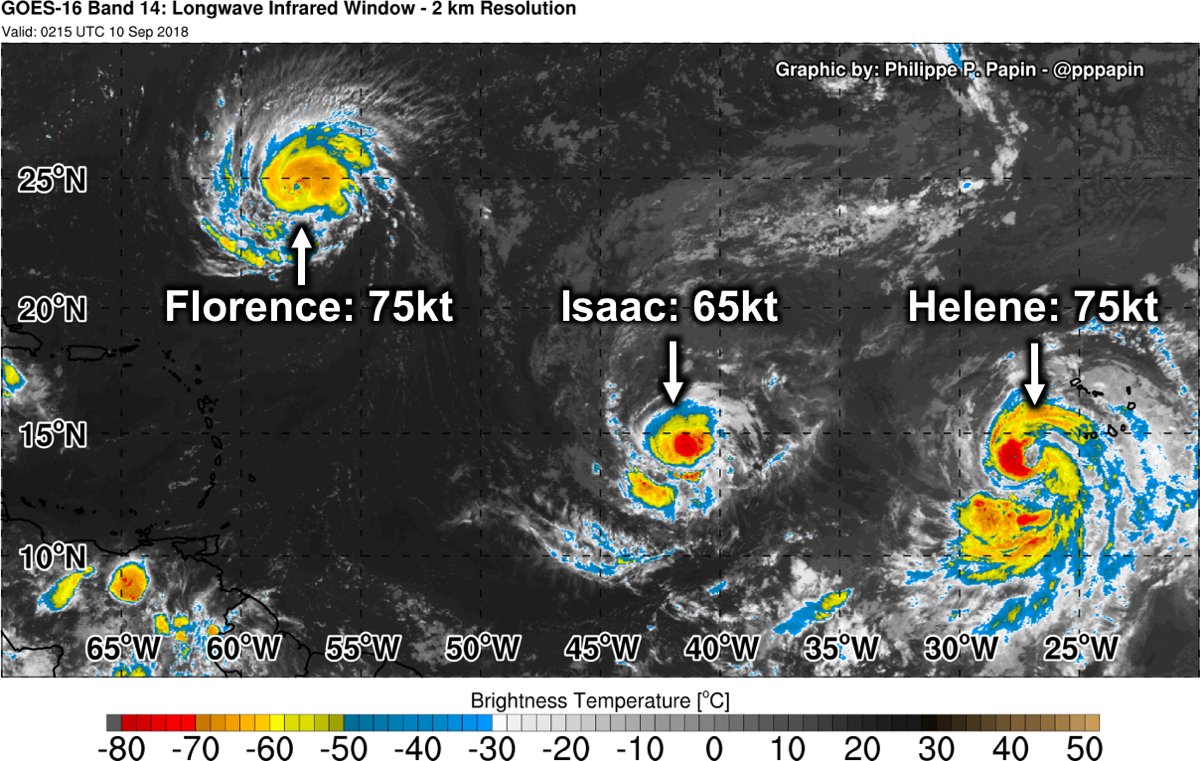 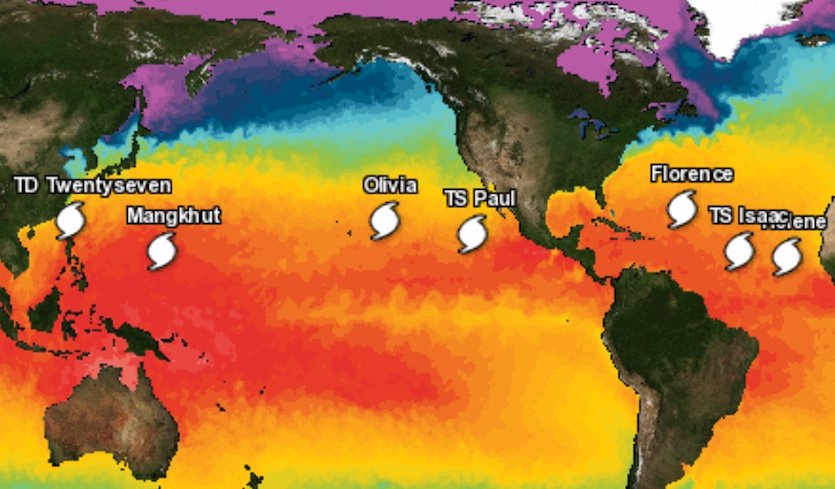 Hurricane Florence intensifying. The eye wall is reconstructing and the NE quadrant of the storm is building. Very soon we will see the classic eye wall of this dangerous hurricane. pic.twitter.com/3HVQsuZViF

Remarkably solid agreement on the general path of #Florence.

Not a good thing for the East Coast unfortunately… 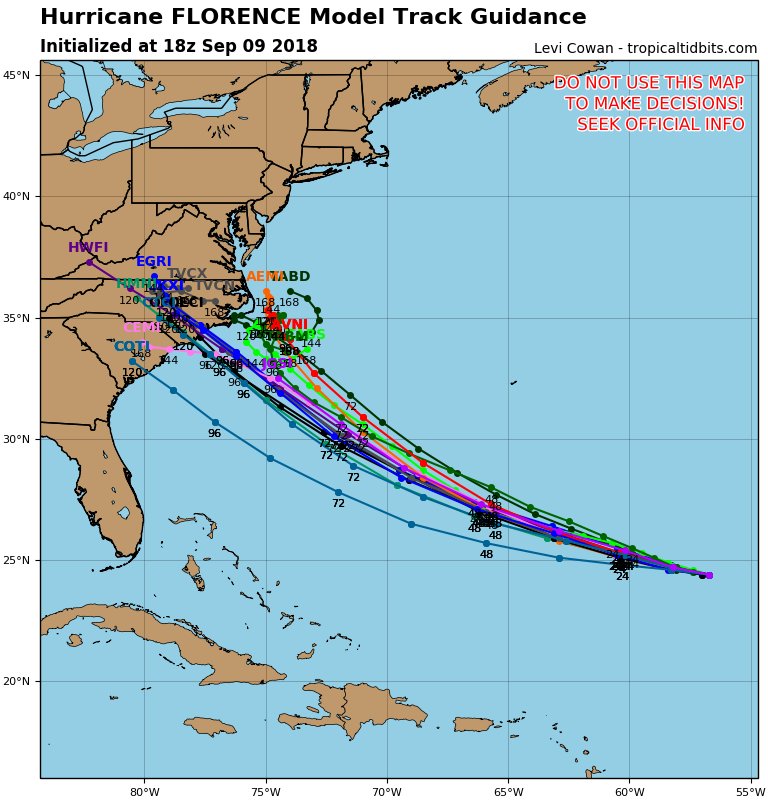 Models are coming into better agreement. 18Z SUN GFS tracks what looks like cat 4 #Florence further south and inland than that of 12Z GFS devastating the outer banks of eastern North Carolina before moving the system out to sea. Model scenarios will vary some through Monday. 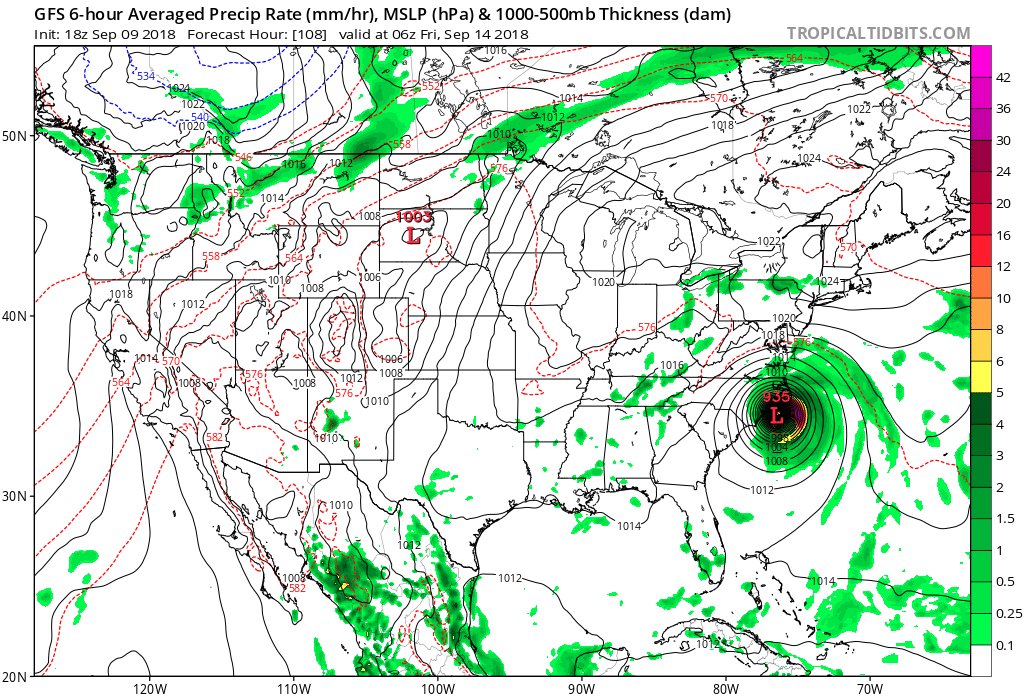 For analogs on Hurricane Florence, there isn’t one. This is in many ways a potential combination of Hurricane Hugo of 1989 for coastal impacts, with Harvey of 2017 for inland flooding. Seriously.

A tropical system hitting the Carolinas typically brings New England some rain. #Florence may not. Instead, it may slow and stall, creating a major problem for the Mid-Atlantic. 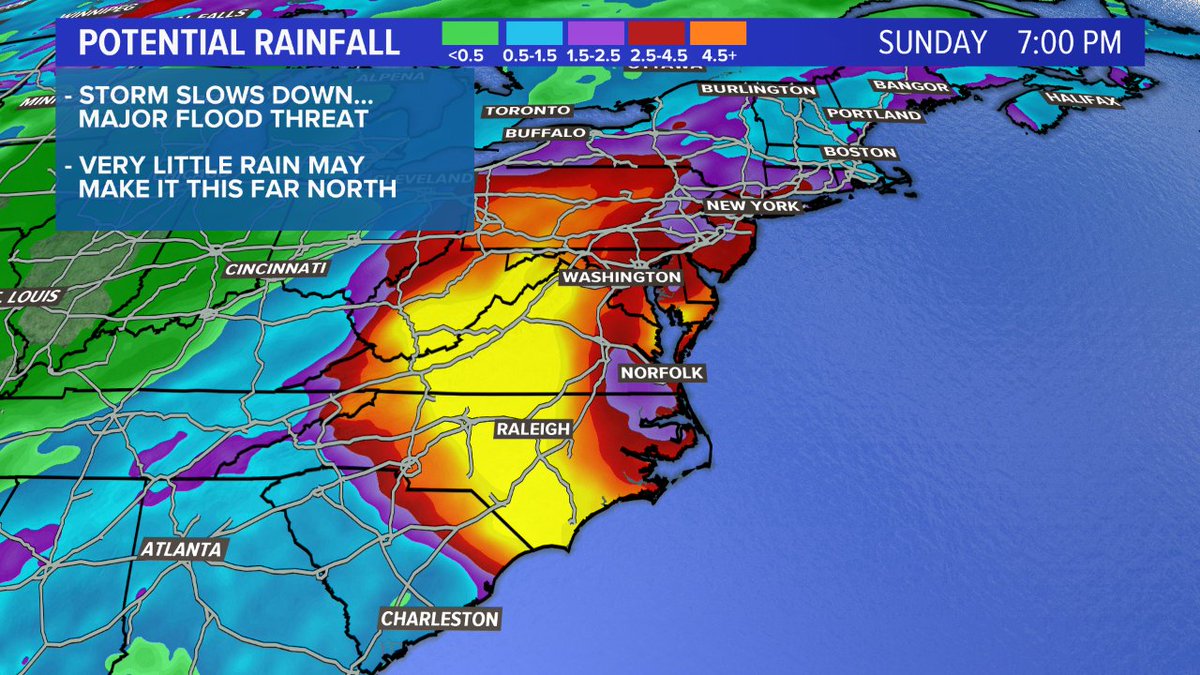 5 pm Sun Update…Hurricane Florence is a little stronger with max winds of 85 mph with rapid strengthening expected Monday. Remember the cone depicts the possible track of the storm center – not the area of impact. Hazardous conditions can occur outside of the cone. 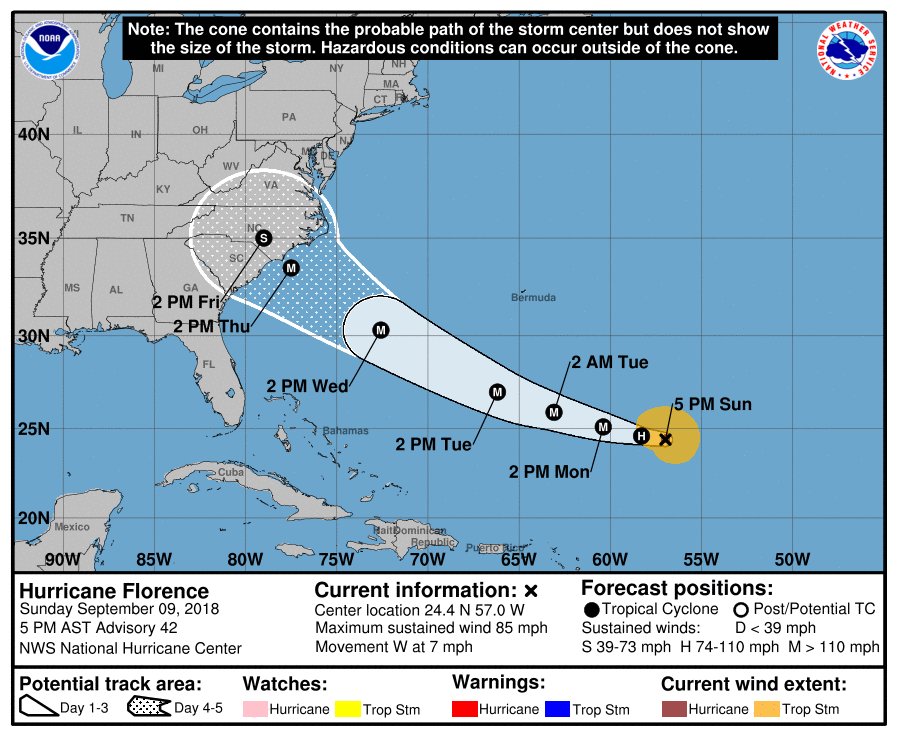 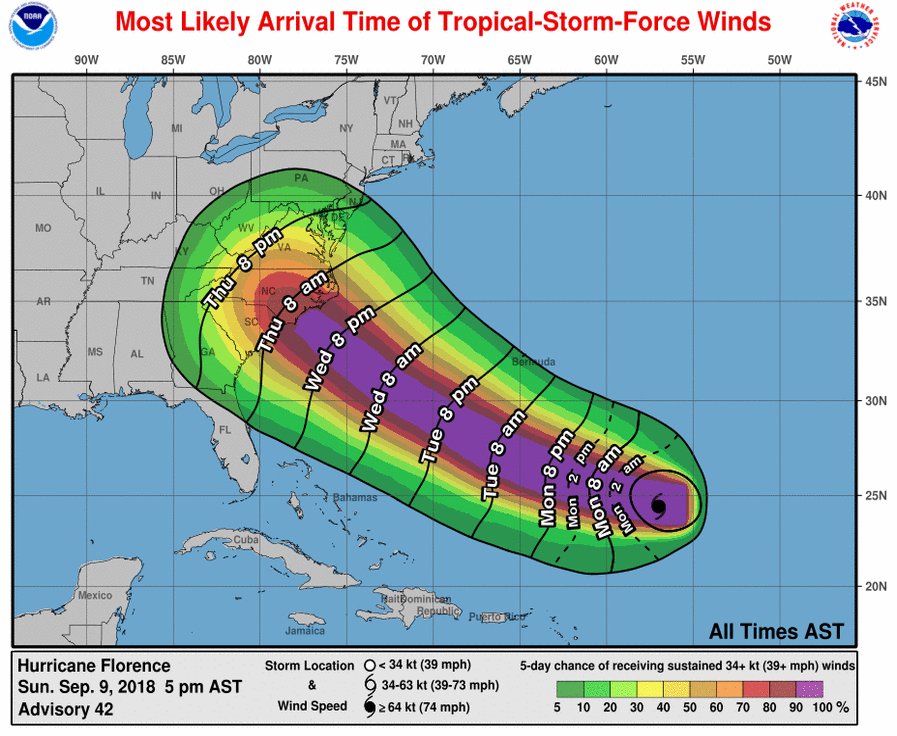 Current sea surface temperatures out ahead of #Florence are plenty warm to support an intense category 4 or even 5 hurricane at the storms peak. Very dangerous conditions in place for an approaching major hurricane. 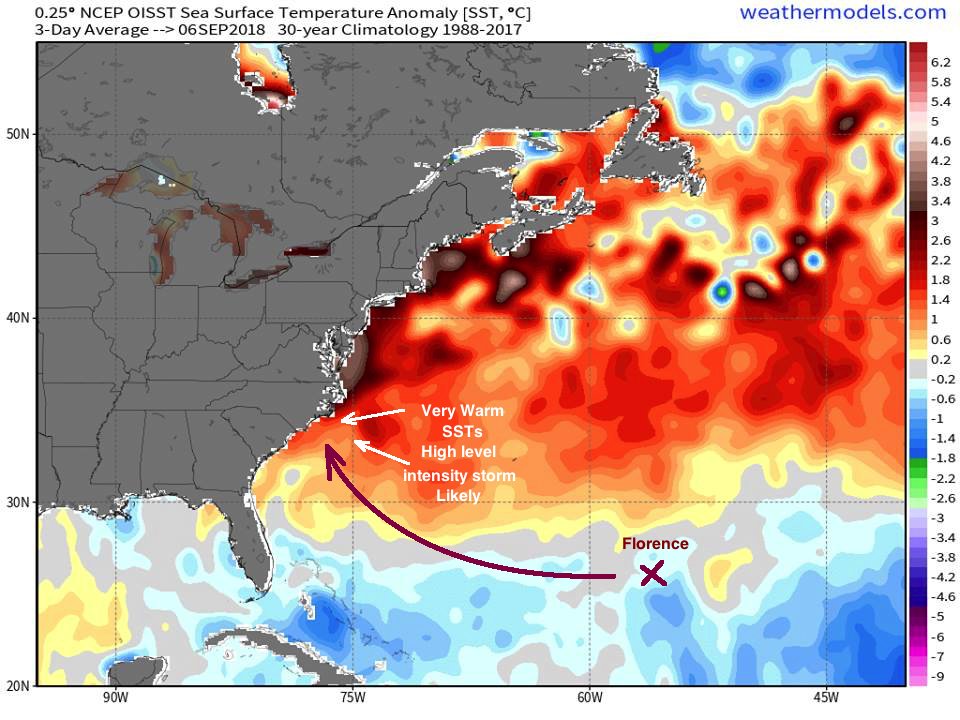 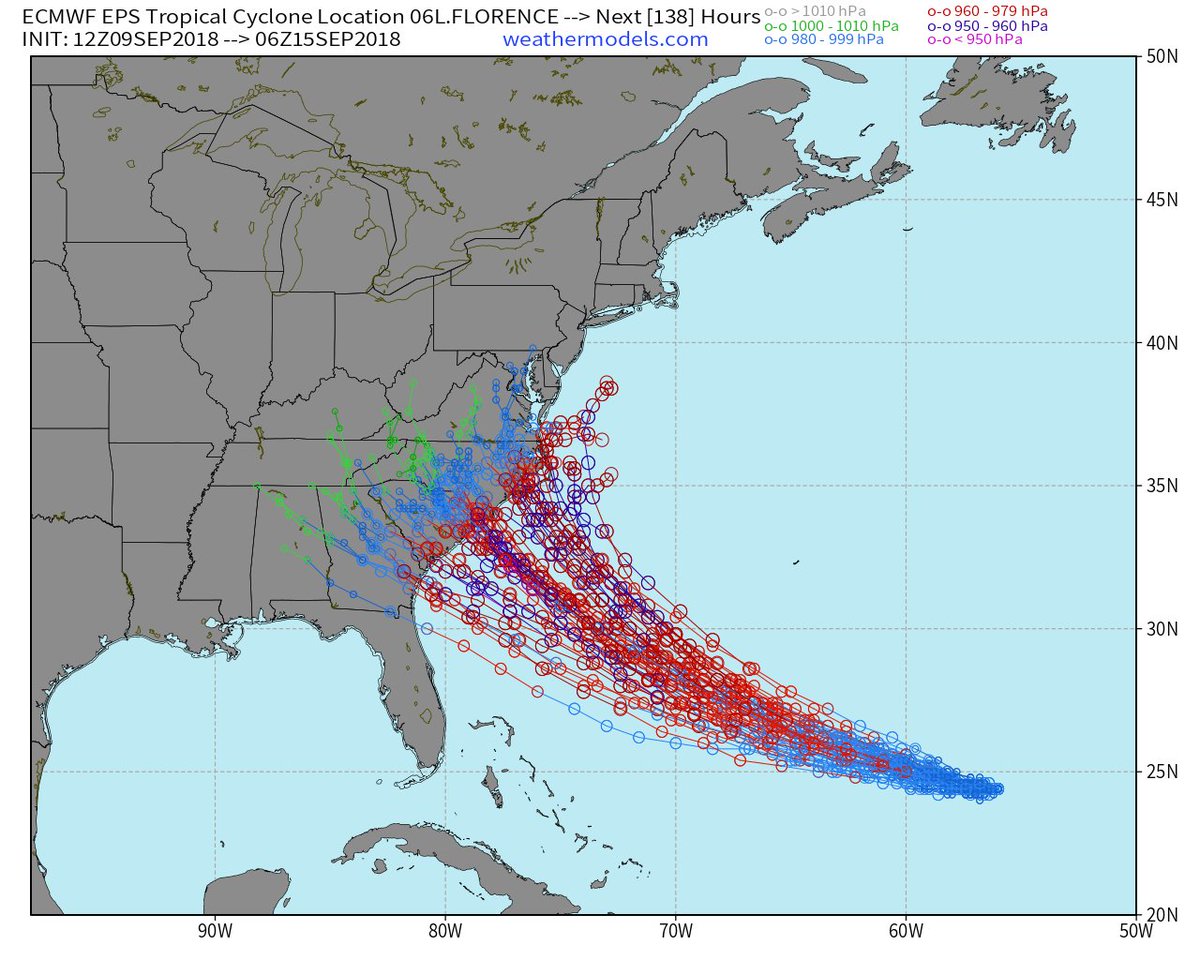 Very consistent with itself EURO model over the last few days continues to forecast a North Carolina landfall. The further south along the coast for a landfall the worse flooding and coastal destruction implications will be. The 12Z SUN EURO has a landfall near Wilmington. 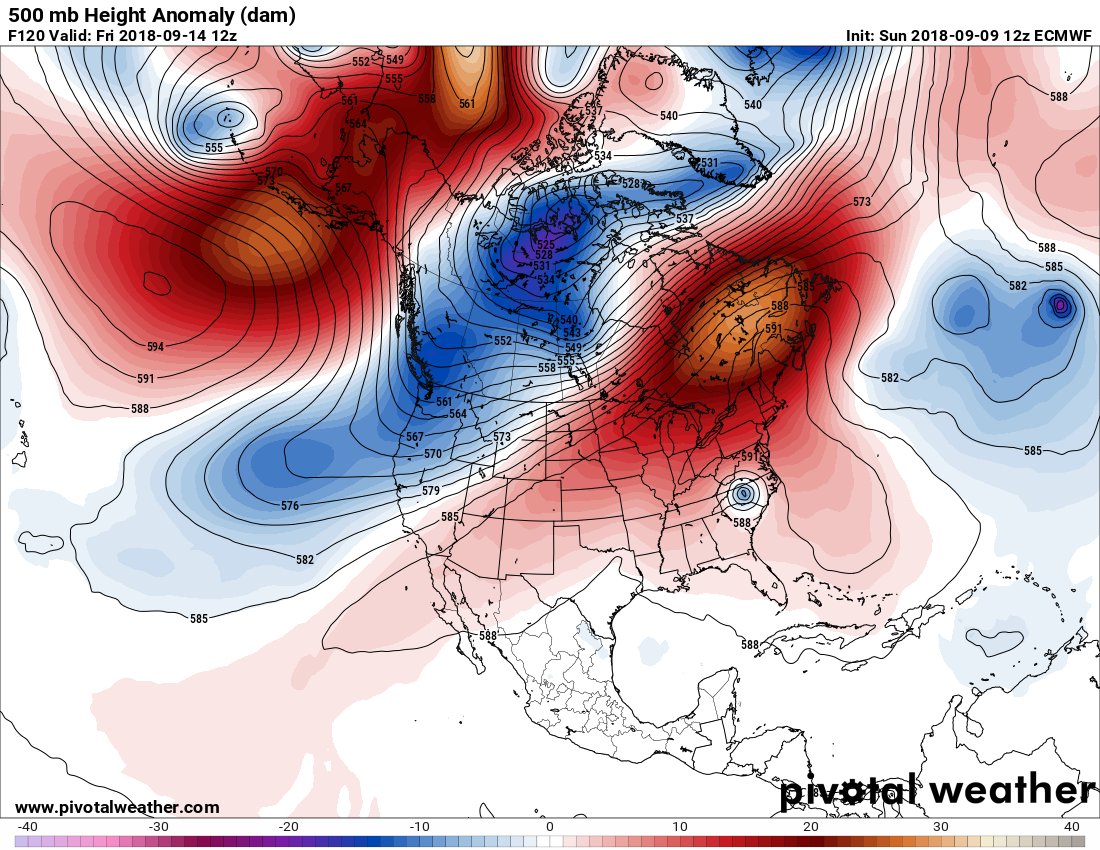 Here’s the full Euro track….much deeper inland and a stall that would deliver epic amounts of rain. I mean widespread catastrophic flooding. This is awful if right. And that rain map is only though 180 hours – it’s still pouring out!! 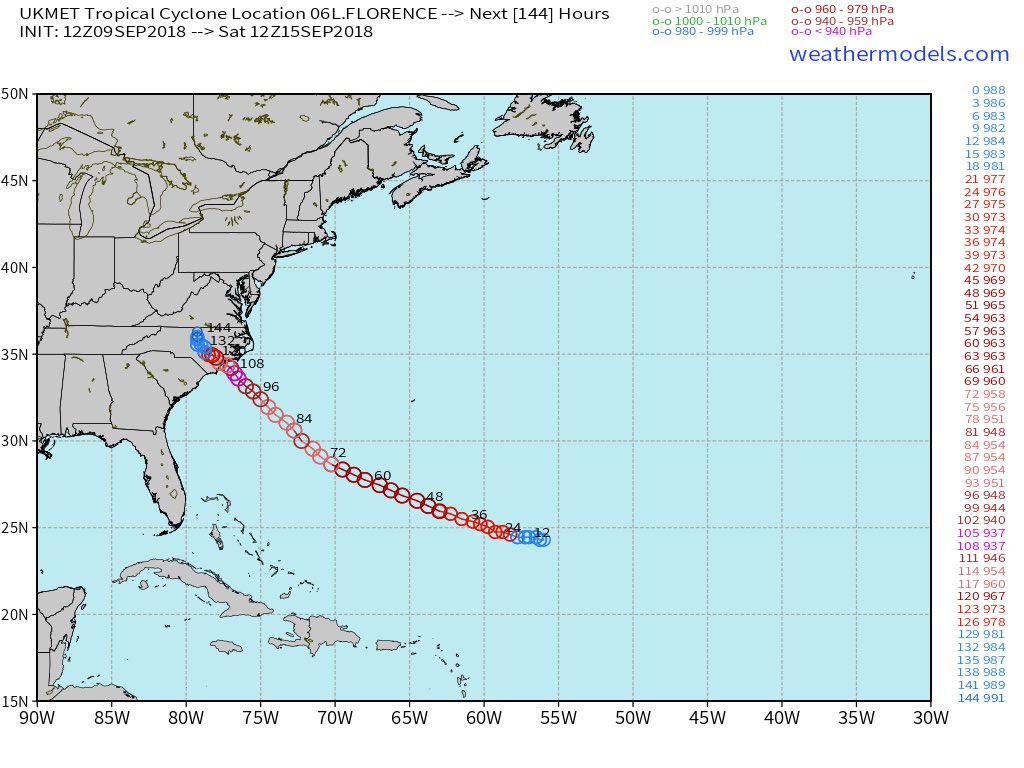 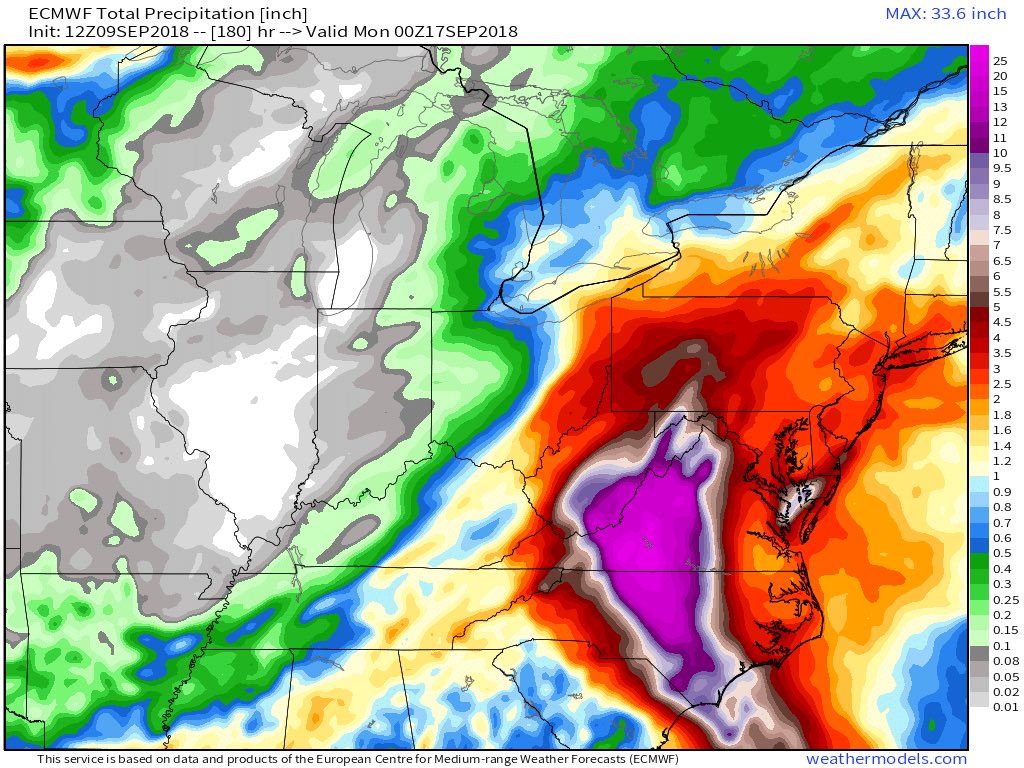 A word of warning: do *not* assume a spaghetti map properly depicts the uncertainty in #Florence‘s track.

ATCF plots make it appear NC is the only state threatened. This is misleading if you don’t know the technical details. 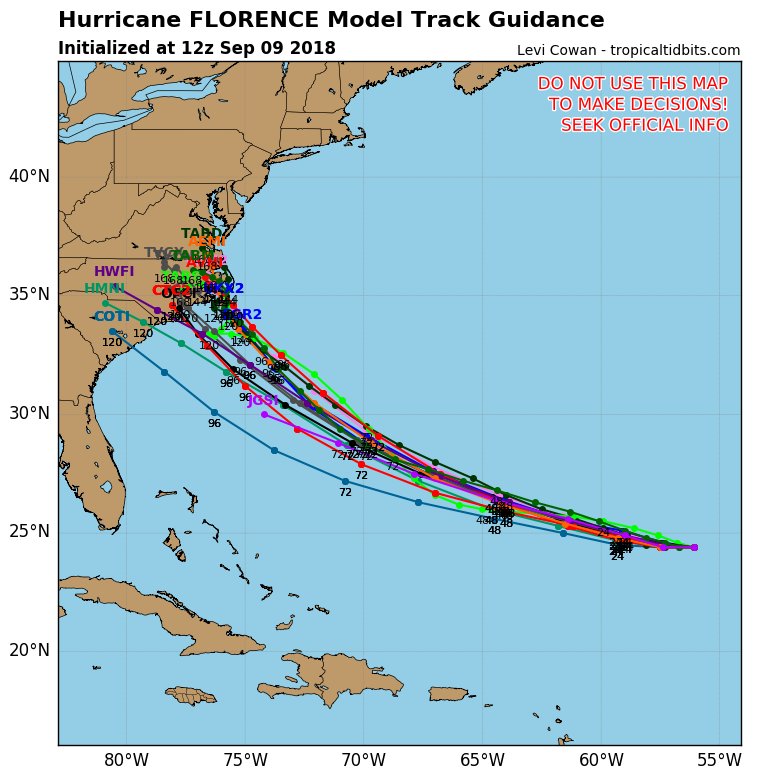 Midday GFS is brutal for the Outer Banks of NC. Canadian is similar too. 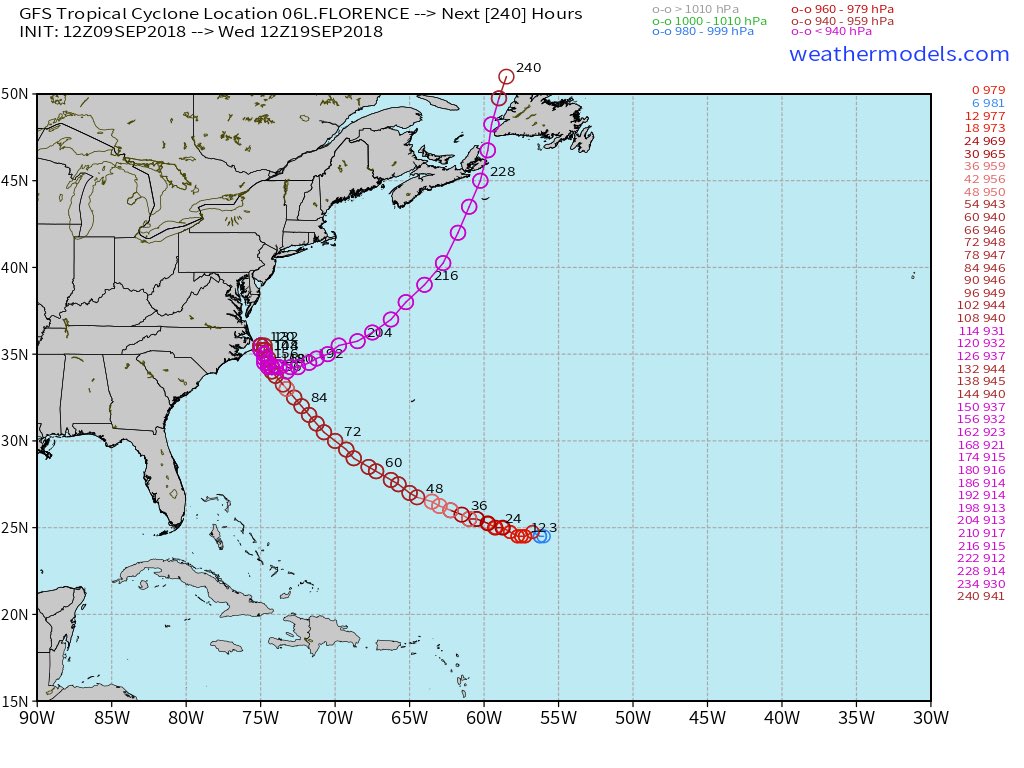 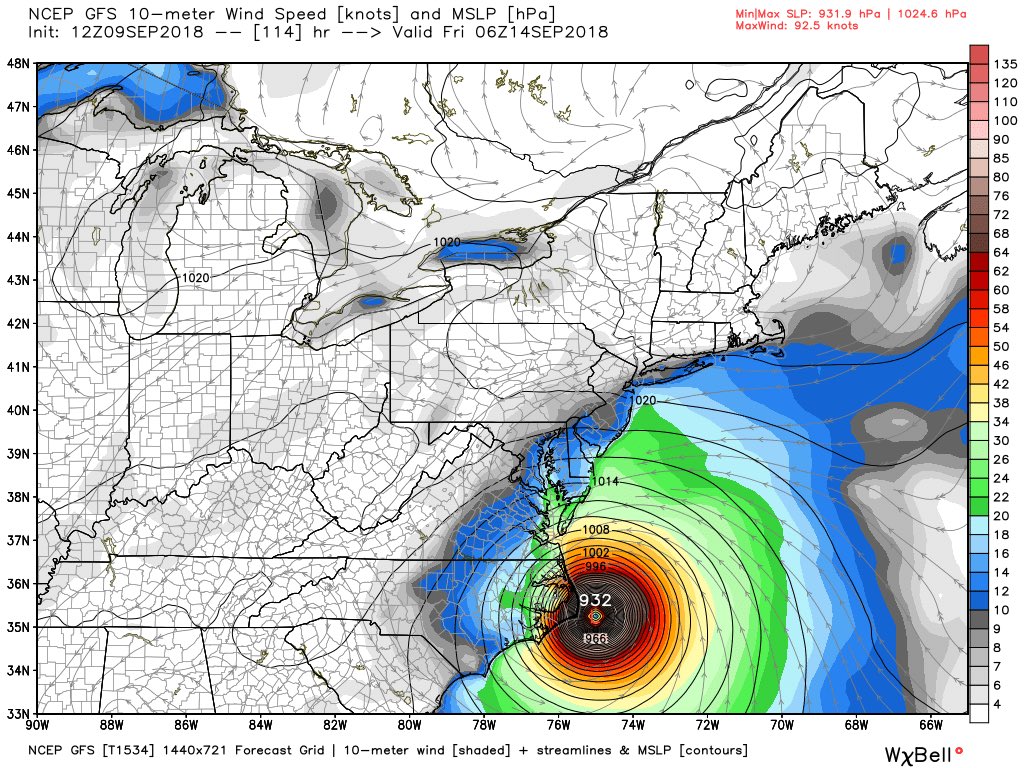 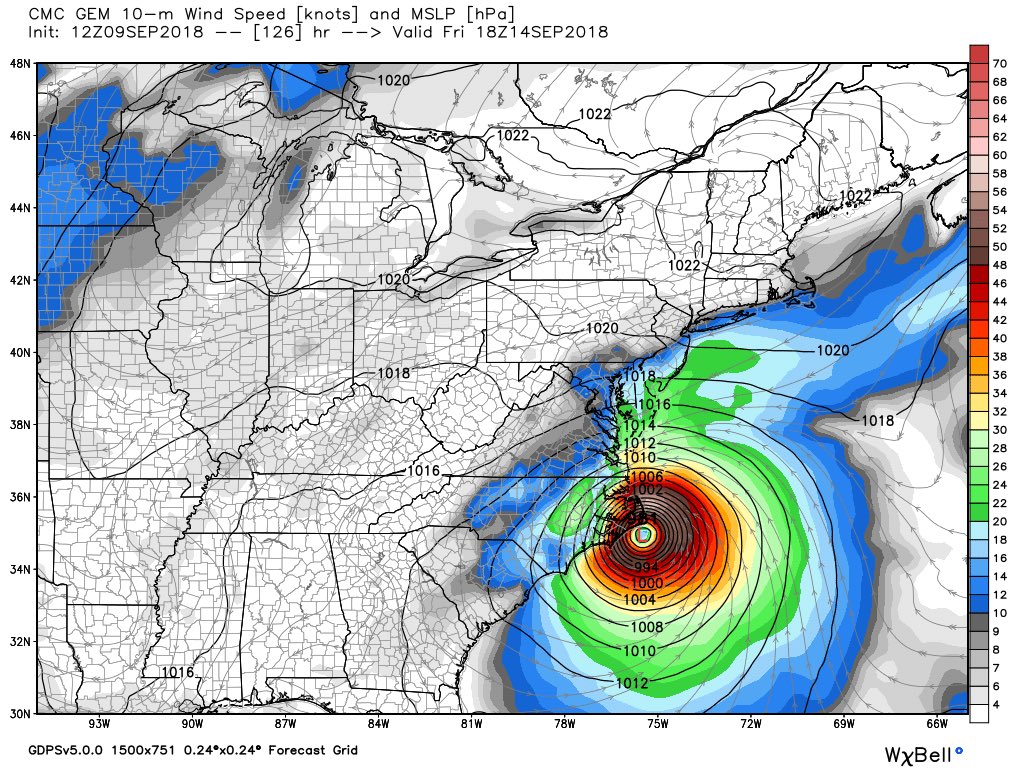 The 12Z SUN GFS tracks what looks like cat 4/5 #Florence further east than that of 06Z devastating the outer banks of eastern North Carolina before moving the system out to sea. Model scenarios will vary some through Monday, but the trend should be for better consensus. 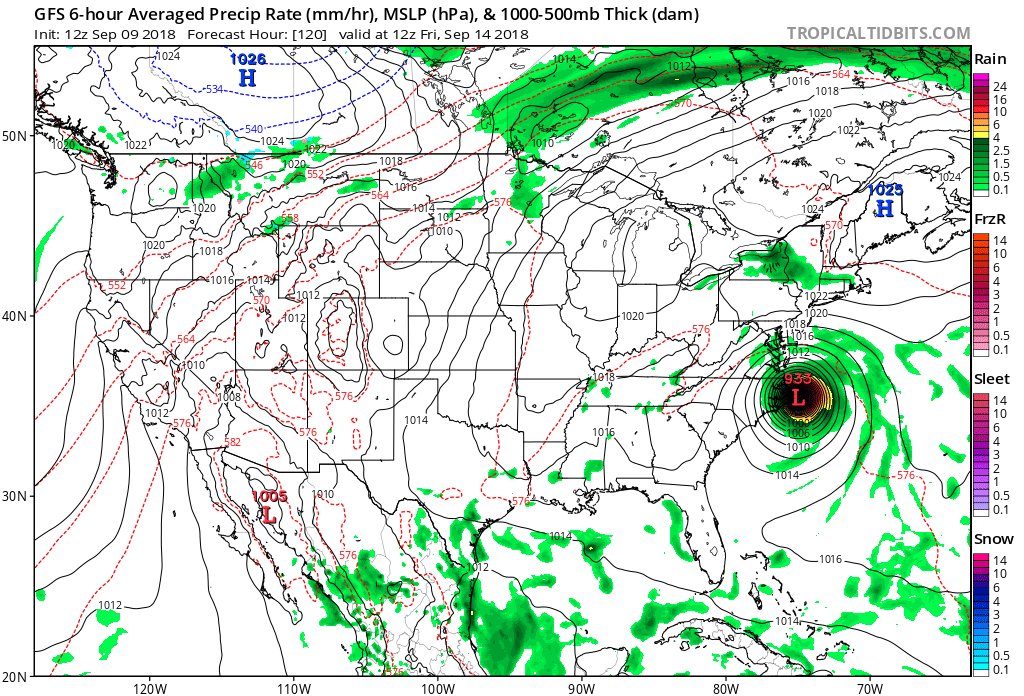 Hurricane #Florence could become the “#Harvey of the East Coast” if it stalls near the mid-Atlantic coast for days, as predicted by some top models. https://bit.ly/2wZBvdy 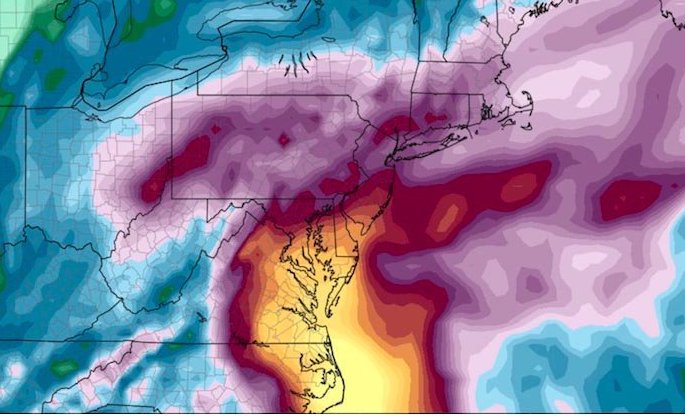 “There is real concern that #Florence will slow or stall over the Mid-Atlantic Friday through next weekend & produce disastrous amounts of rain, although it is too soon to pinpoint where.” More info: https://wapo.st/2wYhRxV  (Pictured NWS 7-day rain forecast, likely conservative) 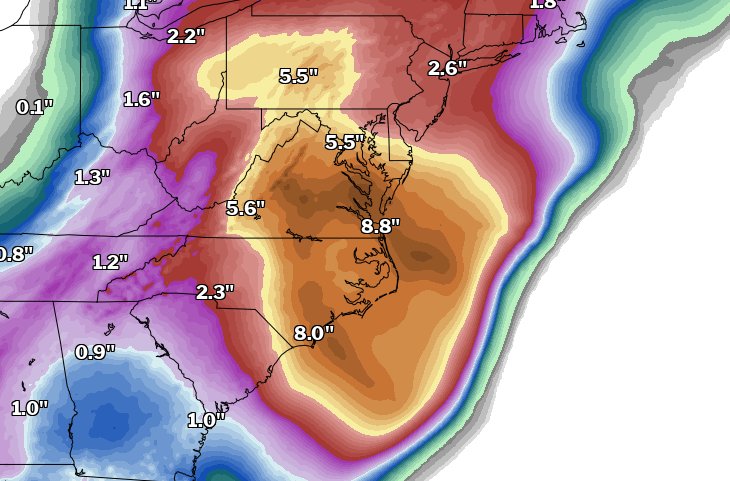 How much did long-term #GlobalWarming contribute to the hot sea surface temperatures that boost hurricanes? Here an analysis of the Atlantic temperature trends, from Caesar et al., Nature 2018. https://www.nature.com/articles/s41586-018-0006-5 … #Florence 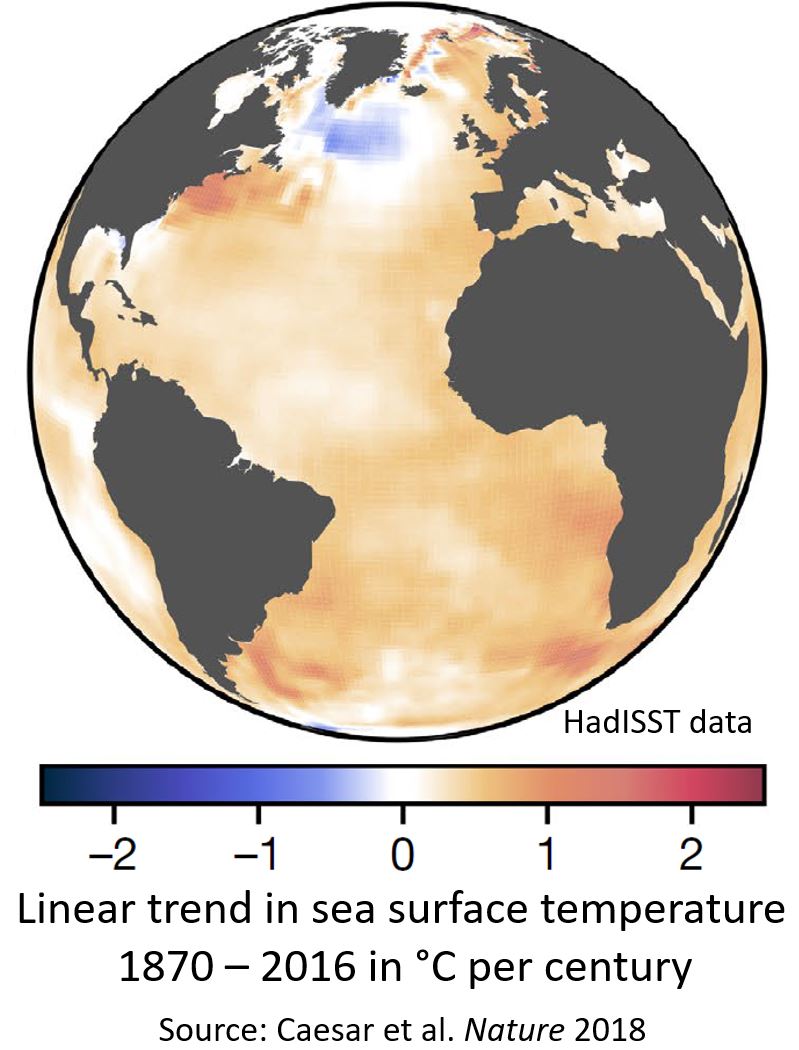 The first climate change shoe to drop is the unusual westward track for Florence in association with a system located where the system is in the Atlantic. We are still waiting for the other shoe…rapid intensification.

The 06Z SUN GFS tracks what looks like cat 4/5 #Florence further west than that of 00Z devastating eastern North Carolina and the Mid-Atlantic states before moving the system out to sea. Model scenarios will vary some through Monday, but the trend now is for better consensus. 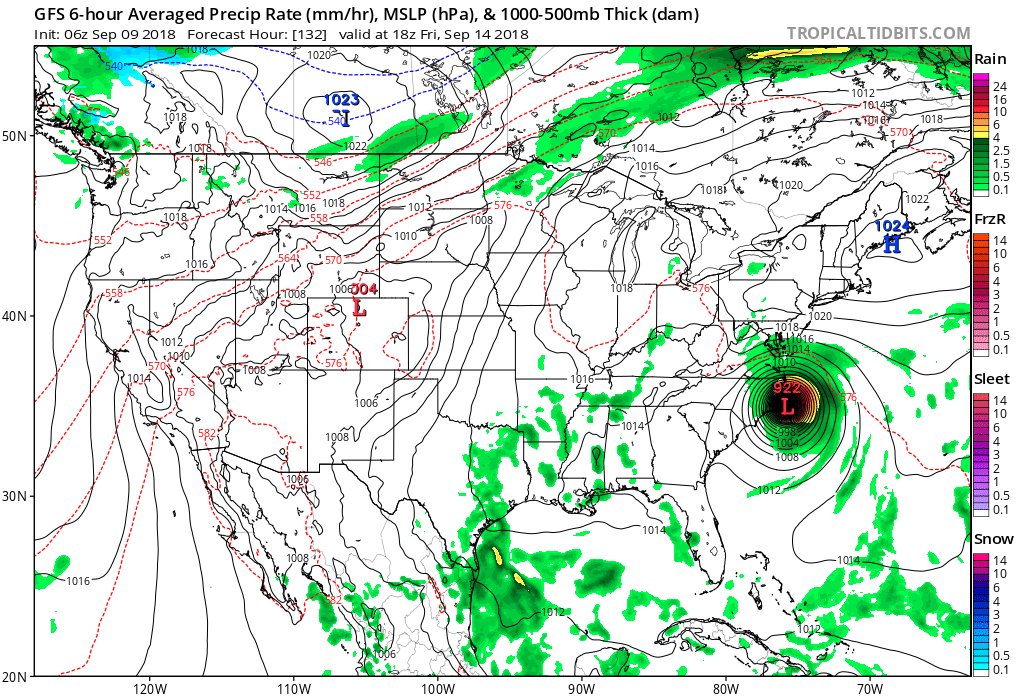 Hurricane Florence GFS model 10 day forecast 6 am EST. High pressure building off Africa initial steers Florence to the WNW. A strong high pressure ridge coming off the N East coast dips down behind Florence from a low pressure trough in the E Central Atlantic and 👇👇 pic.twitter.com/jsGeKJiTXa

#Florence is now a #hurricane again, on its way to becoming a much stronger one pic.twitter.com/Ht7uztfJBh

Increasing risk of 2 life-threatening impacts from Florence: storm surge at the coast & freshwater flooding from prolonged heavy rainfall inland. Those at the coast & inland from SC into the mid-Atlantic should closely monitor Florence, & ensure you have a hurricane plan in place 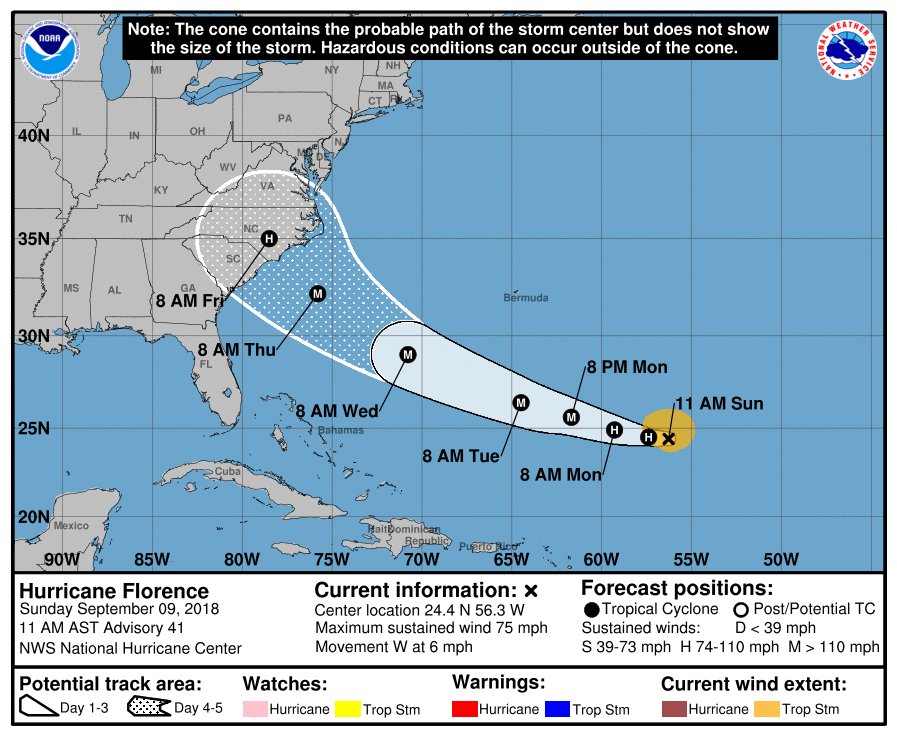 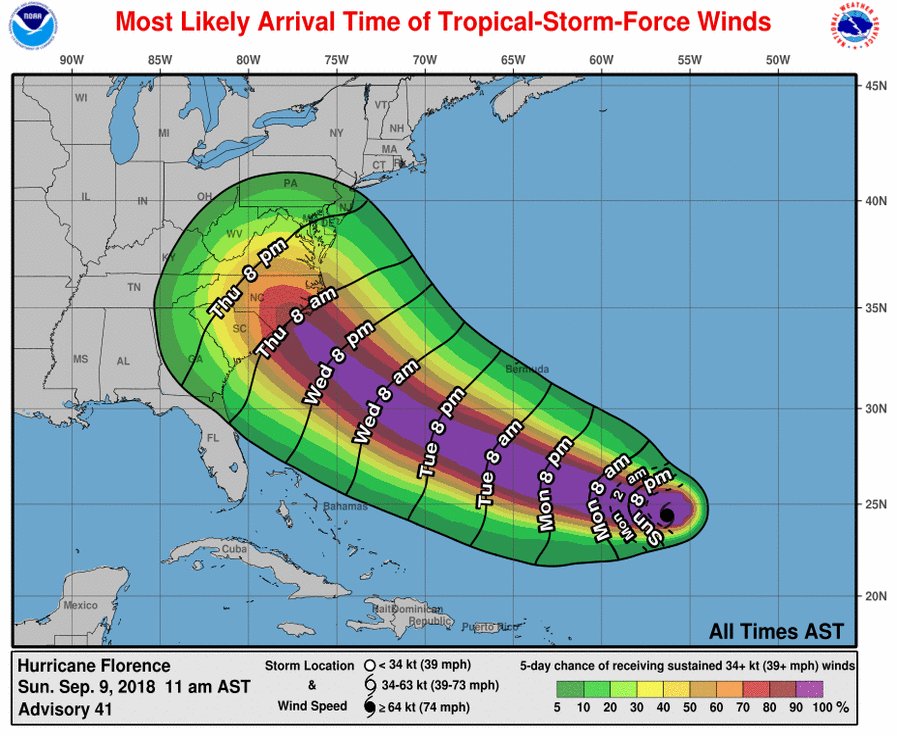 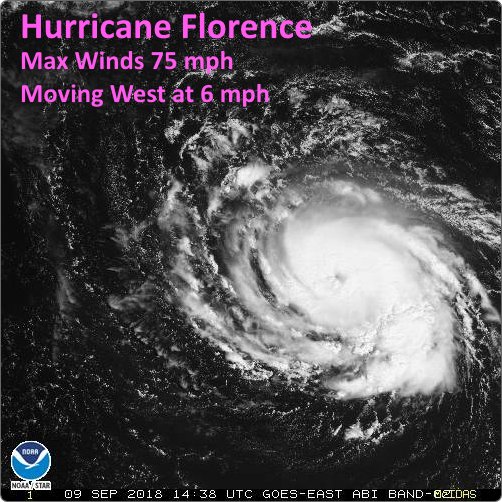 A lot have focused on the #Florence model battle b/w the ECMWF & GFS, but maybe the more important battle is to see how the new #FV3 performs vs. the #GFS.

06z runs were interesting because the #FV3 is weaker & further west compared to the op #GFS.

FV3 is similar to the ECMWF. 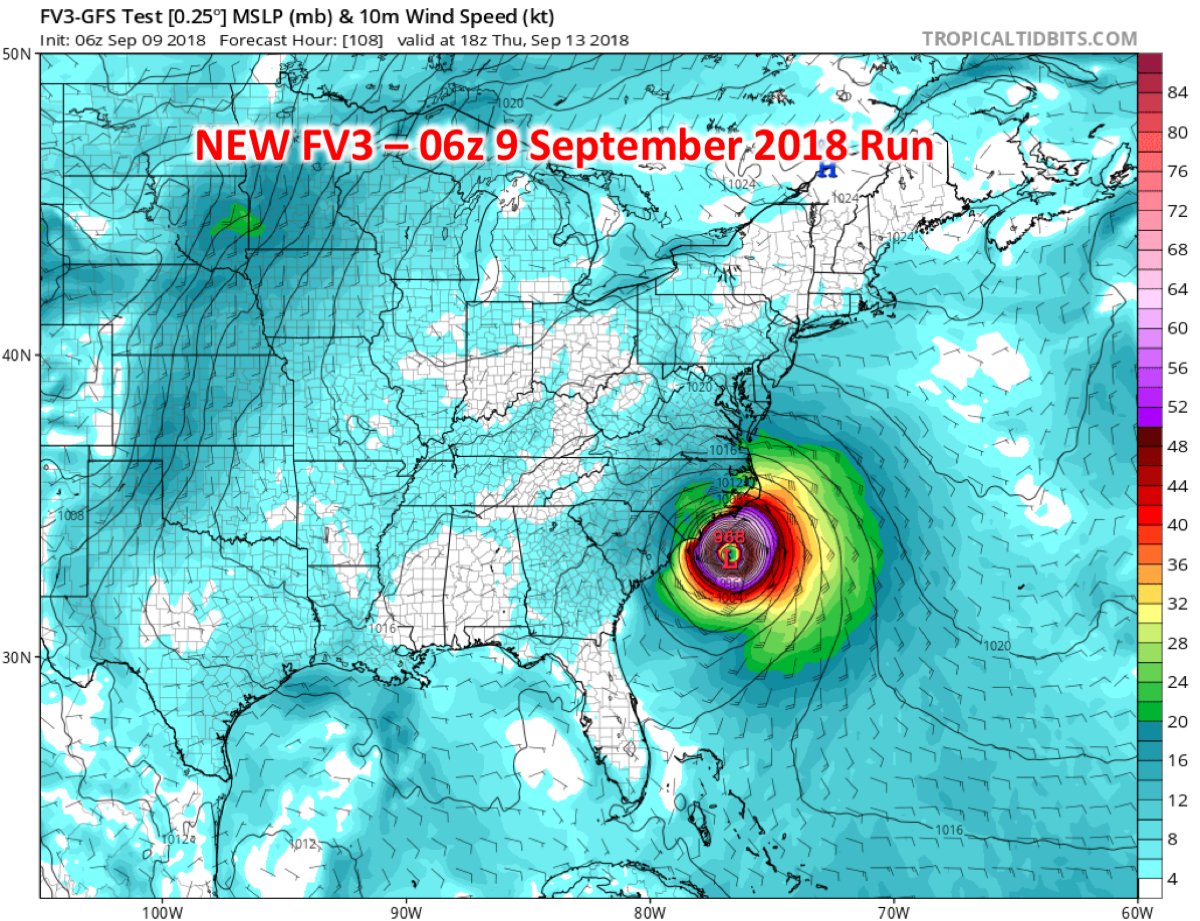 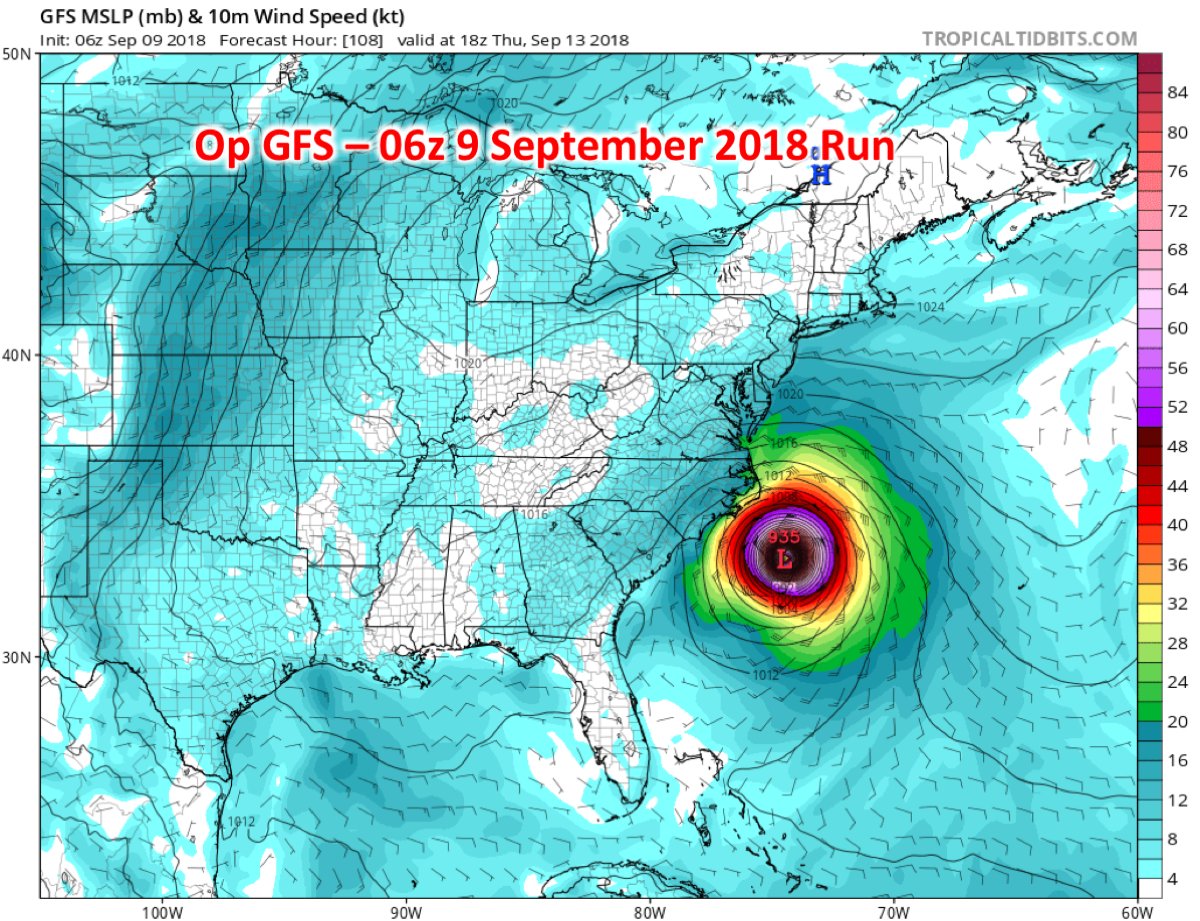 We're under 5 days from #Florence likely making landfall somewhere along the SE US coast.

This will be a big success for the long-range ECMWF, which aside from one day, took the southwestern branch of the bifurcation under the ridge from the beginning. pic.twitter.com/QylZDVkISr

Elsewhere in the tropics:

Amazingly, #Isaac is on a similar time frame as #Florence for when winds of tropical storm force could first arrive on land.  About four days of prep time left in the Windward and Leeward Islands. 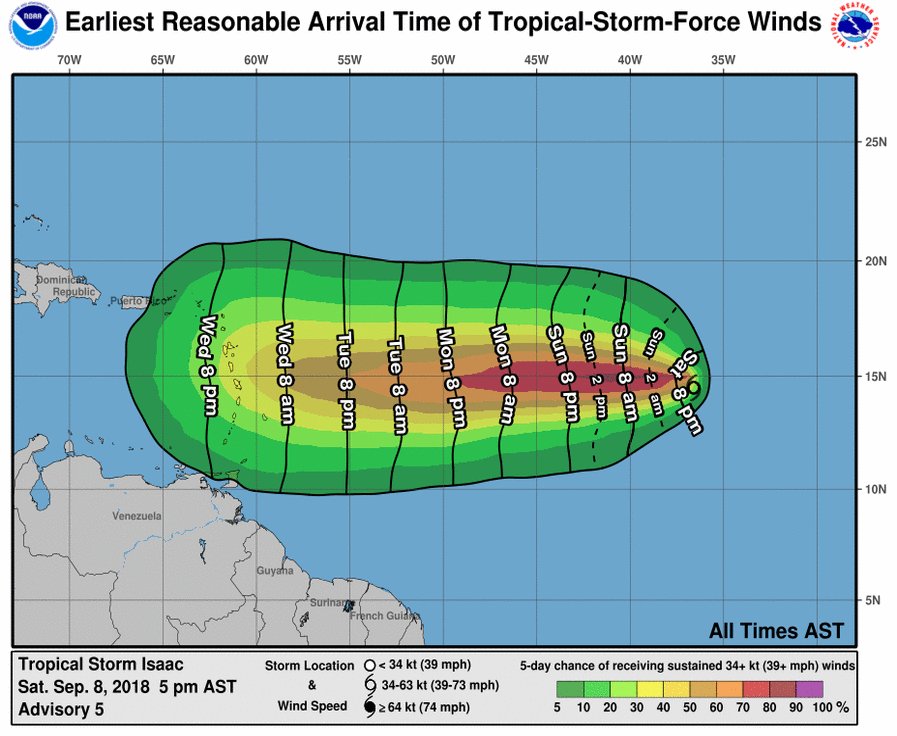