Shortly after the dawn of the atomic age scientists wanted to use a gimic to advise and warn the public about how perilously close civilization was coming to an end due to the existential threat of nuclear war. They came up with the idea of an atomic clock. Ever since 1947 the minute hand on the clock has either been pushed forward toward midnight when treats to humanity have grown more dire or away from midnight when international cooperation appears to lessen threats. From Wikipedia here is a definition and a little history behind the Doomsday Clock:

The Doomsday Clock’s origin can be traced to the international group of researchers called the Chicago Atomic Scientists, who had participated in the Manhattan Project.[7] After the atomic bombings of Hiroshima and Nagasaki, they began publishing a mimeographed newsletter and then the magazine, Bulletin of the Atomic Scientists, which, since its inception, has depicted the Clock on every cover. The Clock was first represented in 1947, when The Bulletin co-founder Hyman Goldsmith asked artist Martyl Langsdorf (wife of Manhattan Project research associate and Szilárd petition signatory Alexander Langsdorf, Jr.) to design a cover for the magazine’s June 1947 issue. As Eugene Rabinowitch, another co-founder of The Bulletin, explained later,

The Bulletin’s clock is not a gauge to register the ups and downs of the international power struggle; it is intended to reflect basic changes in the level of continuous danger in which mankind lives in the nuclear age…[8

For 2018 the authors of the Doomsday Clock pushed the minute hand forward to two minutes until midnight indicating that they frowned upon the progress the world made in 2017: https://thebulletin.org/2018-doomsday-clock-statement

While primarily trying to focus attention on nuclear war threat the authors do bring up other threats to civilization as we know it like climate change. Quoting from the statement:

“On the climate change front, the danger may seem less immediate, but avoiding catastrophic temperature increases in the long run requires urgent attention now. Global carbon dioxide emissions have not yet shown the beginnings of the sustained decline towards zero that must occur if ever-greater warming is to be avoided. The nations of the world will have to significantly decrease their greenhouse gas emissions to keep climate risks manageable, and so far, the global response has fallen far short of meeting this challenge.”

I would have to agree looking at CO2 concentration data. Here is a graphic from CO2.earth, for example:

Continuing on the climate front quoting from the statement:

An insufficient response to climate change. Last year, the US government pursued unwise and ineffectual policies on climate change, following through on a promise to derail past US climate policies. The Trump administration, which includes avowed climate denialists in top positions at the Environmental Protection Agency, the Interior Department, and other key agencies, has announced its plan to withdraw from the Paris Agreement. In its rush to dismantle rational climate and energy policy, the administration has ignored scientific fact and well-founded economic analyses.

These US government climate decisions transpired against a backdrop of worsening climate change and high-impact weather-related disasters. This year past, the Caribbean region and other parts of North America suffered a season of historic damage from exceedingly powerful hurricanes. Extreme heat waves occurred in Australia, South America, Asia, Europe, and California, with mounting evidence that heat-related illness and death are correspondingly increasing. The Arctic ice cap achieved its smallest-ever winter maximum in 2017, the third year in a row that this record has been broken. The United States has witnessed devastating wildfires, likely exacerbated by extreme drought and subsequent heavy rains that spurred underbrush growth. When the data are assessed, 2017 is almost certain to continue the trend of exceptional global warmth: All the warmest years in the instrumental record, which extends back to the 1800s, have—excepting one year in the late 1990s—occurred in the 21st century.

Despite the sophisticated disinformation campaign run by climate denialists, the unfolding consequences of an altered climate are a harrowing testament to an undeniable reality: The science linking climate change to human activity—mainly the burning of fossil fuels that produce carbon dioxide and other greenhouse gases—is sound. The world continues to warm as costly impacts mount, and there is evidence that overall rates of sea level rise are accelerating—regardless of protestations to the contrary.

Especially against these trends, it is heartening that the US government’s defection from the Paris Agreement did not prompt its unravelling or diminish its support within the United States at large. The “We Are Still In” movement signals a strong commitment within the United States—by some 1,700 businesses, 250 cities, 200 communities of faith, and nine states, representing more than 40 percent of the US population—to its international climate commitments and to the validity of scientific facts.

This reaffirmation is reassuring, and other countries have maintained their steadfast support for climate action, reconfirmed their commitments to global climate cooperation, and clearly acknowledged that more needs to be done. French President Emmanuel Macron’s sober message to global leaders assembled at December’s global climate summit in Paris was a reality check after the heady climate negotiations his country hosted two years earlier: “We’re losing the battle. We’re not moving quickly enough. We all need to act.” And indeed, after plateauing for a few years, greenhouse gas emissions resumed their stubborn rise in 2017.

As we have noted before, the true measure of the Paris Agreement is whether nations actually fulfill their pledges to cut emissions, strengthen those pledges, and see to it that global greenhouse gas emissions start declining in short order and head toward zero. As we drift yet farther from this goal, the urgency of shifting course becomes greater, and the existential threat posed by climate change looms larger.

I applaud the authors for there efforts to warn humanity against the large threats of its own making. Too bad that climate change is one of them exacerbated by one man and his administration, Trump.

I do have an ET alert today and from the most susceptible area of the country to record warmth the last couple of years:

Here’s a snapshot of high temperatures expected on Monday. Some record-breaking highs will be possible Sunday, and especially Monday. #CAwx #LAheat #SoCal 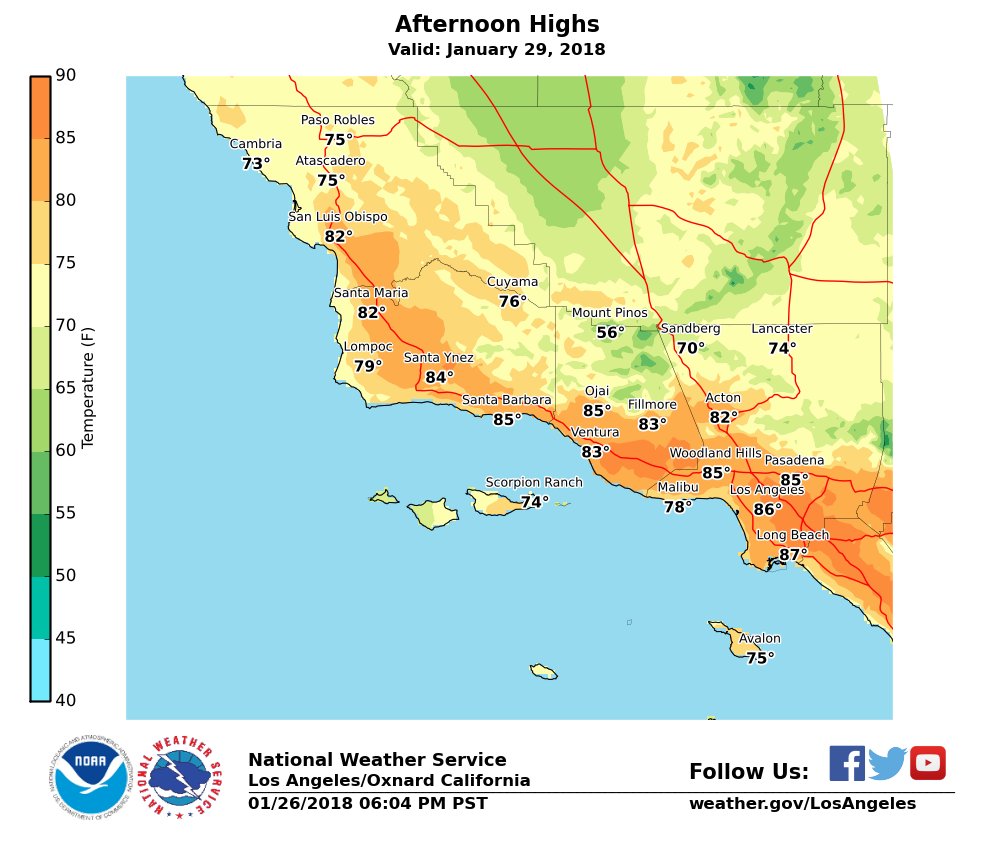 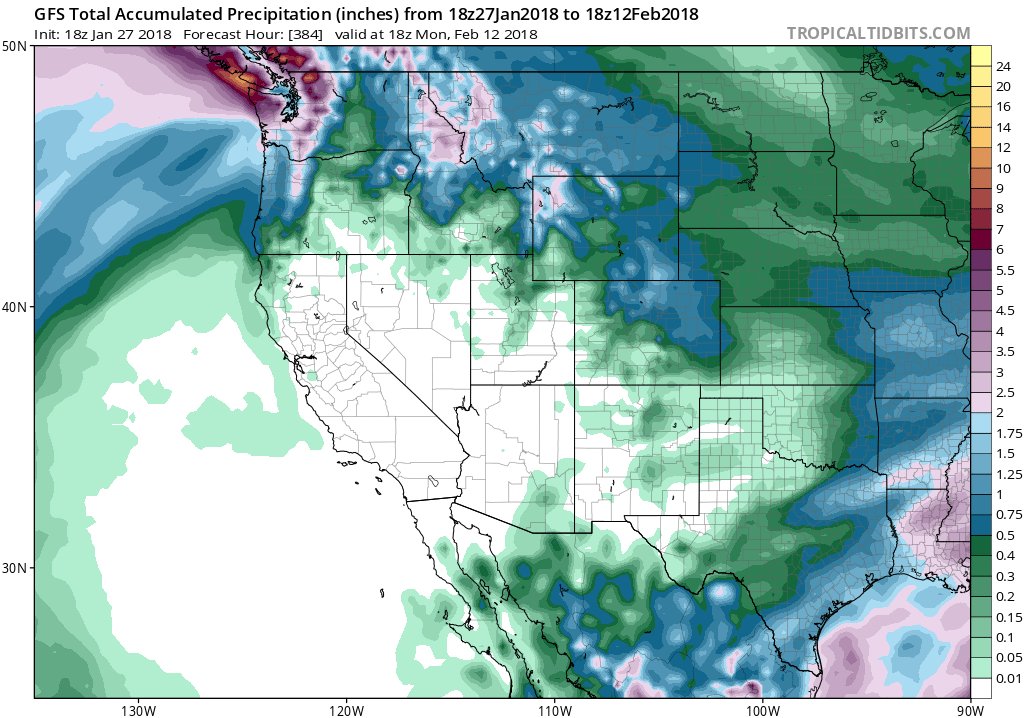 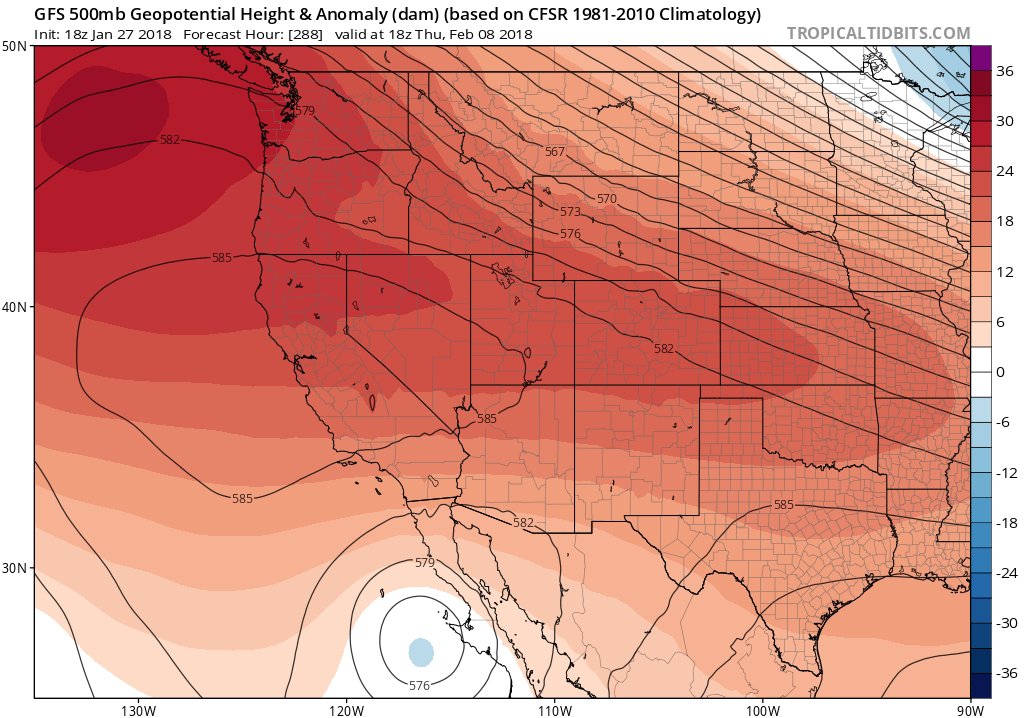