Sunday August 12th… Dear Diary. The main purpose of this ongoing post will be to track United States extreme or record temperatures related to climate change. Any reports I see of ETs will be listed below the main topic of the day. I’ll refer to extreme or record temperatures as ETs (not extraterrestrials)😊. Here is today’s main climate change related topic:

Perhaps of all the tipping points depicted on the below graphic I am most familiar with today’s subject since I was a meteorologist long before getting interested in climate change. I first began staring at 250 and 500 millibar charts, those at jet stream level, at Florida State in the meteorology chart room in 1981 trying to recognize and memorize different patterns for weather forecasting. Those of us coming out of school during the 1980s were just beginning to get trained in using automated, computer generated models, which weren’t that great at the time at forecasting jet stream pattern changes. Our bread and butter was manually “outguessing” these models. The best of the crop of forecasters coming out of met schools during that decade memorized 500 millibar patterns like true baseball fans memorized stats on individual player cards, becoming fanatics when it came to the game of outforecasting computer models.

(Global map by Will Stefen of potential tipping cascades. The individual tipping elements are color- coded according to estimated thresholds in global average surface temperature (tipping points) (12, 34). Arrows show the potential interactions among the tipping elements based on expert elicitation that could generate cascades. Note that, although the risk for tipping (loss of) the East Antarctic Ice Sheet is proposed at >5 °C, some marine-based sectors in East Antarctica may be vulnerable at lower temperatures.) From: http://www.pnas.org/content/early/2018/08/07/1810141115#ref-12

As an aside, computer models have gotten so good since about 2010 that automation has taken over the generation of day to day forecasts. Companies like The Weather Channel no longer want or require large complements of meteorologists to forecast, only employing mets to intervene with automated systems when, for example, micro to mesoscale outflow boundaries induce thunderstorm activity that sophisticated computer models don’t catch. Even so, with greater advanced computer power runs of models can be processed in as little time as fifteen minutes apart catching and correcting short term errors. Forecasting is truly becoming a dying art, per se, because of automation. Now we are reduced to creating graphics for on air purposes, or for those who have the gift of gab, presenting forecasts on T.V.

That stated I was fortunate to have my met career during a thirty year window where I became very acquainted with typical 500 millibar patterns, especially during the 1980s and 1990s. After the turn of the century, though, “odd” patterns began to unfold. I and others within my working group at TWC sent countless emails to each other and climate scientists outside of the company pointing out giant ridges, or heat domes, at fairly high latitudes. If it hadn’t been for the prior twenty years of looking at 500 millibar patterns, we would have not recognized just how odd these jet stream configurations had become at times. Stu Ostro of TWC continually pointed out how many closed lows across the Northern Hemisphere were forming south of large ridges between about 2000-2012. Perhaps some of those emails enticed Dr. Michael Mann to come up with the following study on what carbon pollution was beginning to do with the jet:

As Stu Ostro and others had seen since 2000, more warm air at 500 mb was encroaching upon polar areas forcing the jet to undulate more wildly than in the past, pinching off at times to form fairly strong storms. During winter snowstorms occasionally pummeled areas such as southern China from these closed lows forming south of strong ridges, which denialists often pointed to as evidence of no real climate change. All the while global surface average temperatures continued a persistent warming trend. Buckling of the jet, though, is another method for nature to cool the planet. Understand that the jet has buckled for thousands of years bringing cold air southward to cool mid latitudes, otherwise places like Dallas, Texas would be too hot to live in during the summer.

Here we see a pattern where two closed lows produced locally heavy precipitation in both the U.S. West and East. Jet maxes (or points where the wind is highest) are denoted by x’s:

Referring back to Will Steffen and company’s chart the jet stream is forecast to have its tipping point at +3.0 to + 5.0C above preindustrial conditions when it won’t be a cooling factor but will warm the planet. Their computers have used climate models to time when the polar vortex shrinks so much that it can’t undulate, redistributing cool air to mid latitudes. At above +3.0C there will be less not more closed lows or storms, which are symptomatic of change now. The jet will trap any residual cool polar air rather than redistribute the stuff southward, becoming a net warming factor for the planet. Or will it? Perhaps the jet keeps heat from accumulating in the tropics, but atmospheric mixing may do this anyway. Perhaps having a jet or core of high winds aloft is a neutral factor.

I can envision a small 576 decameter line on a 500 millibar chart encircling the Arctic where the jet is stuck in the future. Perhaps it may get so warm that this height line of relatively lower heights is much higher at say around 588 decameters with huge 600+ decameter ridges over continents to the south creating a hellish world. Exactly at what average surface temperature this occurs around +3.0C is unknown. If we as a species keep this temperature below +2.0C I hope we never find out.

On Monday now you see it and now you don’t. Our northern Plains heatwave will dissipate quickly after Sunday, which is good news for that part of the country:

Unfortunately heat will start increasing again from California into the Pacific Northwest.

Here is some of Sunday’s climate related news. Click pictures for links and embedded videos:

Glad to hear that there are Programms left in the US that people can watch that feed o  scientific facts actually! Watch the video interview of @MichaelEMann

Current dewpoint temps of near 70 are being felt along the #SoCal coast and into the valleys as well as parts of the lower deserts — considered tropical! This thanks (or not!) to record ocean temps off our coast as well as monsoonal moisture into the lower deserts. #cawx 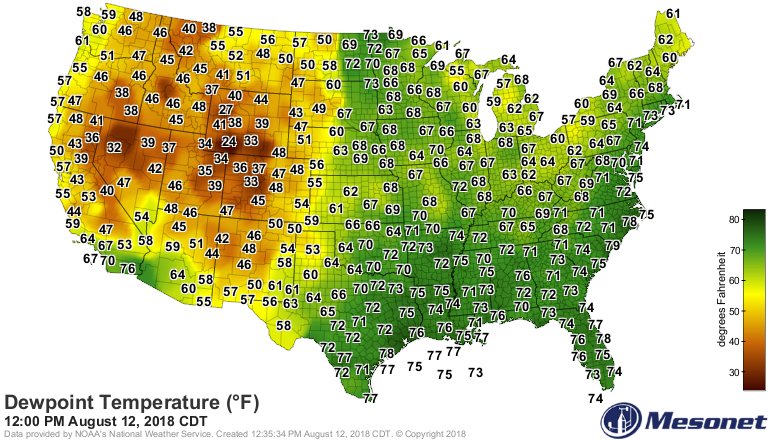 A few things to note on this alarming new paper:

No, we are not definitely (or even probably) headed toward a hothouse apocalypse.
It’s a literature review / opinion piece.
Many scientists I reached out to still found its ideas compelling.

Kemble Dawson Walker‏ @KembleWalker
A critical factor was the weakness of the Niger government, says Reij, which allowed farmers to reclaim trees that had previously been the property of the state, and restore them to health. He is…
9:56 PM – 7 Aug 2018 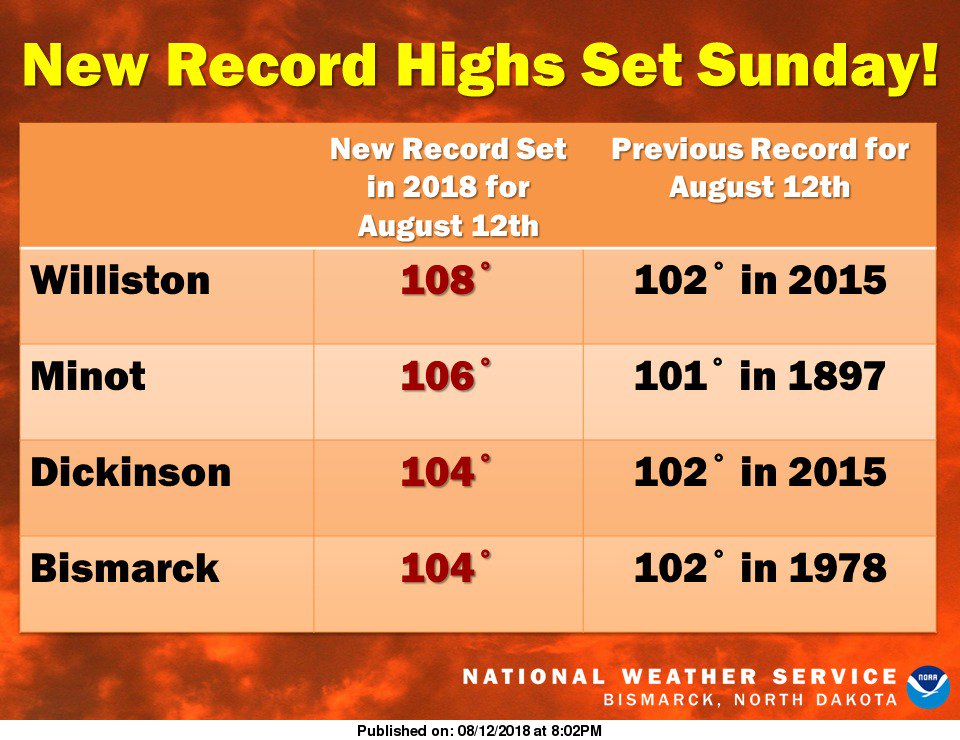 Record heat was confined to North Dakota. Most of the West had above average temperatures while the eastern half of the nation had typical readings for mid August.

Other than Death Valley’s 112F, Needles 111F, Williston, North Dakota was hotter than pretty much all other U.S. locations with 108F, tying their August highest on record. Winnipeg, Manitoba reached 100F. #MYKGNSNEWS 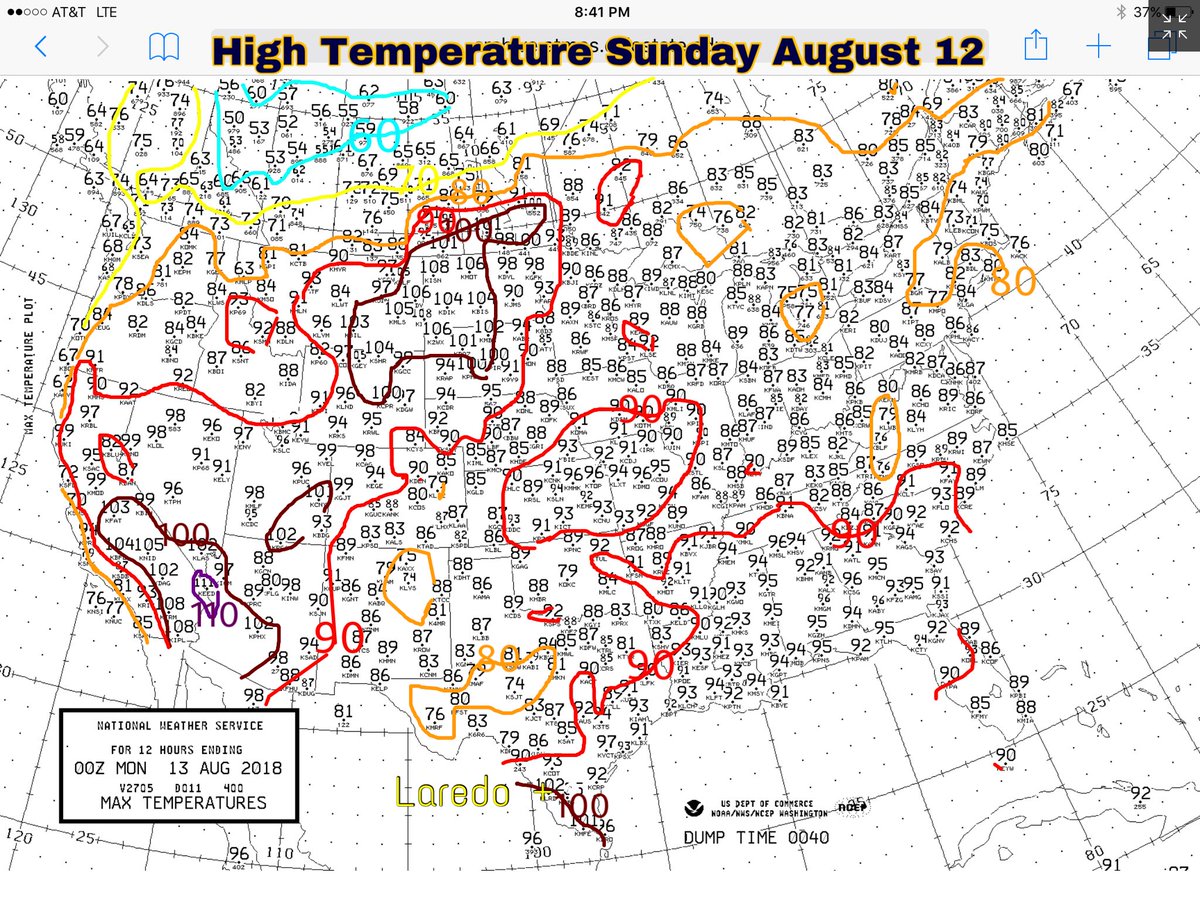