Main Topic: More Deadly Heat Stats From The Summer Of 2021

Dear Diary. As COP26 goes on, delegates and the public need to be reminded that we are fighting against a disease of our own making. Just like people can expire from high temperatures because of a bacterial or viral infection, folks can be killed from fever and associated fires because of a deadly heat wave. Admittedly, climate change heat waves are not as deadly worldwide as COVID19 comparing the number of fatalities in 2021, but they soon will be later this century if we don’t limit greenhouse gases.

New statistics have been compiled in association with the historic Pacific Northwest/Southwestern Canadian heatwave from late June and early July. This is what we all should be fighting to prevent from spreading across our planet during our summer seasons (A special thanks needs to go to Bob Henson for alerting us about this article.): 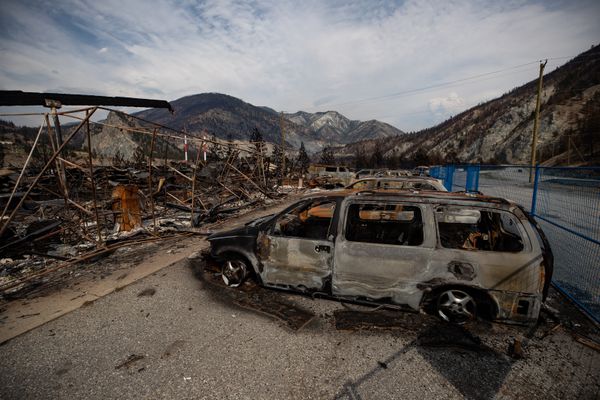 The remains of a large structure and vehicles destroyed by the Lytton Creek wildfire are seen on the side of the Trans-Canada Highway near Lytton, B.C., on Aug. 15, 2021. Lytton broke the record for hottest temperature recorded in Canada for three consecutive days, reaching 49.6 on June 29 before burning down the next day. DARRYL DYCK/THE CANADIAN PRESS

British Columbia’s unprecedented heat dome this summer killed 362 people in the span of 48 hours, according to new data from the BC Coroners Service.

People 70 and older accounted for 69 per cent of the deaths, the coroners service reports. Almost all – 96 per cent – died at home.

The update sheds more light on the demographics of who died during the period, when B.C. shattered dozens of temperature records daily. The coroners service continues to investigate these deaths and is expected to release a final report next spring.

B.C. Premier John Horgan said there was no way to prepare for such a “once-in-1,000-year” event, but the province’s emergency response system had been plagued by understaffing and slow response times long before the mercury began to rise.

Life under the heat dome: You might no longer know where you are

Extreme, deadly heat in Canada is going to come back, and worse. Will we be ready?

Internal correspondence from E-Comm, the 911 emergency dispatch service, obtained by the BC Liberals through an access-to-information request, reveals a months-long scramble to bring in more staff to respond to calls.

“The volume for May 2021 is already higher than peak summer (July and August) volumes in 2020,” Suzanne Halliday, the executive director of data, analytics and decision support for EComm911.ca, wrote in a June 3 e-mail to colleagues.

“The trend is consistent and is alarming in that we are not yet into peak summer 2021 … and we are already struggling with answer delays that threaten to overwhelm our service delivery.”

After pasting a chart of climbing ambulance call volumes and delays, Ms. Halliday wrote that the BC Ambulance Service “is compromising public safety overall by negatively impacting 911 answerability.”

BC Emergency Health Services (BCEHS), the agency responsible for out-of-hospital and interhospital health services across the province, said it received 1,975 ambulance dispatches on June 28 – a single-day record.

In a statement, BCEHS said it expects to fill hundreds of new paramedic positions by the end of the year, as well as 30 new dispatchers. It will also add 22 new ambulances.

‘Like a war zone’: B.C. village of Lytton destroyed by fire

B.C.’s heat wave and fires were driven by climate change, and they won’t be the last. What must we do next?

During the heat dome, temperatures soared past 40 in cities across B.C. The village of Lytton, in the Interior, broke the record for hottest temperature recorded in Canada for three consecutive days, reaching 49.6 on June 29. The following day, the village burned down.

Elsewhere, some people who phoned 911 got a busy signal. Others who did get through were told it could take as long as 10 hours for help to arrive. Schools and some restaurants closed because of the heat, and many hotels around Metro Vancouver were filled with locals in search of air conditioning.

Contacted by The Globe and Mail on June 29, a Vancouver police spokesman said it was difficult to provide the latest numbers on apparent heat deaths because the situation changed by the hour, as people checked on loved ones only to find they had died.

There were no heat-related deaths reported among people under 19, according to the new coroners service data.

Just more than half (52 per cent) occurred in the Fraser Health region, while 23 per cent were in the Vancouver Coastal Health region.

The three cities with the highest number of deaths were Vancouver (99), Surrey (67) and Burnaby (63).

Our Morning Update and Evening Update newsletters are written by Globe editors, giving you a concise summary of the day’s most important headlines. Sign up today.

Here are some more COP26 articles and news: