Friday March 2nd… Dear Diary. The main purpose of this ongoing post will be to track United States extreme or record temperatures related to climate change. Any reports I see of ETs will be listed below the main topic of the day. I’ll refer to extreme temperatures as ETs (not extraterrestrials)😊. Here is today’s main climate change related topic: Spring 2018 Forecast

I’m going to quote myself from summer, and fall and winter when I attempted to make seasonal forecasts: “Forecasting for a season is perhaps the most difficult, and as the public knows, most unreliable product put out by any group be it those, for example, from NOAA or people putting together The Old Farmers Almanac. If farmers, power companies, construction companies, those doing a lot of outdoor work, and even health professionals had a good heads up on weather and temperature trends over the course of  the next three months literally billions of dollars could be saved, and perhaps some lives as well. Unfortunately, model reliability and long range forecast skill sets are not up to par with public expectations when it comes to seasonal outlooks. Weather forecasts for the next week have gotten remarkably better over the last decade, and there has been improvement in long range outlooks, but current crystal ball methods we have for forecasting seasons leave much to be desired. (Admittedly though, the ones for the last year have been quite good.) Knowing the limitations of seasonal forecasting, in this post I will  attempt to make a broad forecast for the spring of 2018 in the United States keeping in mind  trends due to carbon pollution. By no means am I a skilled seasonal forecaster, but I will give this my best shot knowing that there is a need by the public craving to know what is in store this coming spring, at least temperature wise.”😊

My forecast and that of NOAA wasn’t too bad for the winter, but that recent prior season had a lot of interesting climate change twists and turns. Here is my prior forecast for winter:

Winter 2017/18 will get ranked near the top 20 list of mildest winters across the lower 48 states looking at the “record scoreboard” and ranking cart:

Note that JAN 2018 was the first month since NOV 2014 in which there were more daily record mins recorded than daily record maxes….a span of 37 months folks. Quoting my prediction, “I’m going to guess that the winter 2017/2018 ranking will fall around 115 +or – 5,  with higher than average confidence. This winter will probably be slightly cooler than the last two, though. Don’t forget, as mild as the winter is forecast, there should be winter storms from time to time at least across the nation’s northern tier of states for all you snow lovers. Given all of the warm factors shown in this post, though, it should be a mild winter for many sections of the country. Let’s see if this forecast will be a bust.”😅

Well, it’s wash, rise and repeat time. The above chart is a huge clue as to what to forecast for in the months ahead for a seasonal forecast showing a steady trend of warmth. Now we need to ask and answer a series of questions to make a decent seasonal forecast:

Question One. Is there any indication of a temporary planetary cool down? Answer: no, so we would expect the trend from the records scoreboard to continue.

Question Two. What are weather trends like going into the first month of spring 2018,  March?

Let’s kick off making a spring 2018 forecast by looking at the weather pattern going into mid-March using those Penn State ensembles:

Hmm. We have a chilly pattern developing for the East with a persistent warmer than average temperature regime redeveloping in the West. Note the red Greenland ridge or block., which is a signature for cold weather in the East.  Just looking at ensembles the ranking for March 2018 should be near the average mark of 62 (out of 124 years since and including 1895).

Question Three. Will there be a strong Hudson Bay low or vortex ushering in cold air masses into the U.S. particularly as we go into March? Looking at ensembles the thing will need to reform and be weak, initially, which would be a warm factor.

Next let’s look at the current snow cover:

Eyeballing this map snow cover is a tad below average just about everywhere in the north and west, but as opposed to some recent years around the 1st of March there is at least some where we would climatologically expect it. Here I don’t see snow cover as much of a factor going into this spring, except to reinforce near average conditions.

Question Four: What do sea surface temperature averages look like around North America? Here is the answer:

This SST chart doesn’t look much different from the one at the start of winter 2017/18. Above average SST’s surrounding North America probably would promote above average atmospheric warmth across the continent somewhere down the road. The La Nina appears to be in the process of  falling apart, which might be a warming factor.

Here is my updated chart for rankings of seasons and months since the start of this decade:

Notice that the past three springs had a top 110 ranking (or at least among the top 12 warmest springs), but those of 2013 and 2014 were close to average. Spring 2012 was the warmest across the lower 48 states in history. I think that this spring will be ranked somewhere in between the last six. We remain way overdue to see an average or below average season across the U.S. Carbon pollution is definitely making below average seasons more rare. I’m going to guess that spring 2018 ranking will fall around 90 + or – 10,  with average confidence. This spring will probably be slightly cooler than the last three. Given all of the warm factors shown in this post, though, it should be a warm spring for many sections of the country. I think that March will see the lowest monthly average ranking with a “warming trend” thereafter in April and May, which is going out on a limb a little more. Let’s see if this forecast will be a bust.😅

I can’t disagree with the NOAA 90 day outlook too much:

You can follow how the spring season is going by playing my Climate Lottery game here:

Have a great spring!

Wow! Due to that nor’easter March is coming in like a lion and more than living up to its windy reputation. I’ll post more on the mega wind storm tomorrow. For now here are some astonishing wind reports: 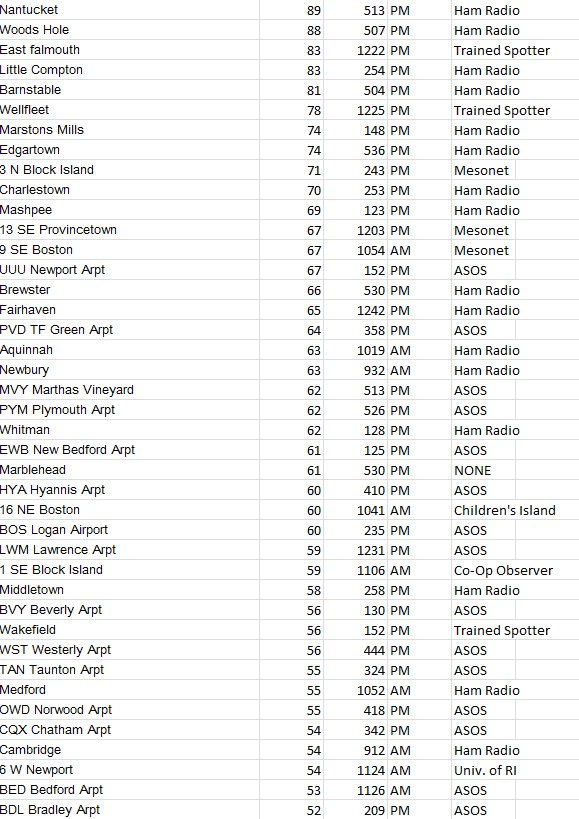 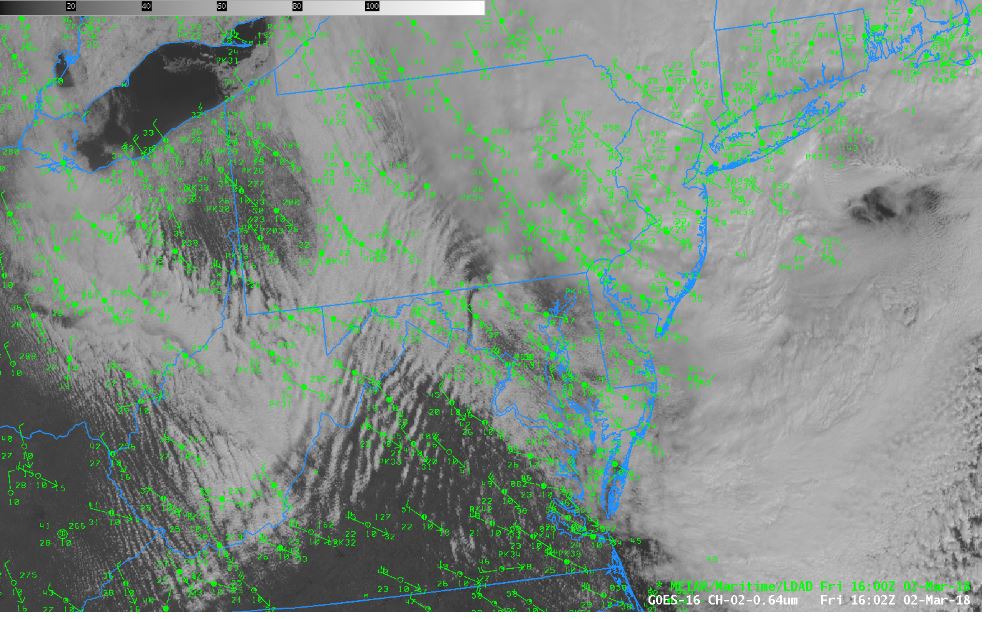 More February climatology is appearing on line. This graphic stands out today. No wonder that the outdoor dress by Atlantans during February looked similar to what I saw in Tallahassee when I was going to school at Florida State during the early 1980s. Now this is climate change: 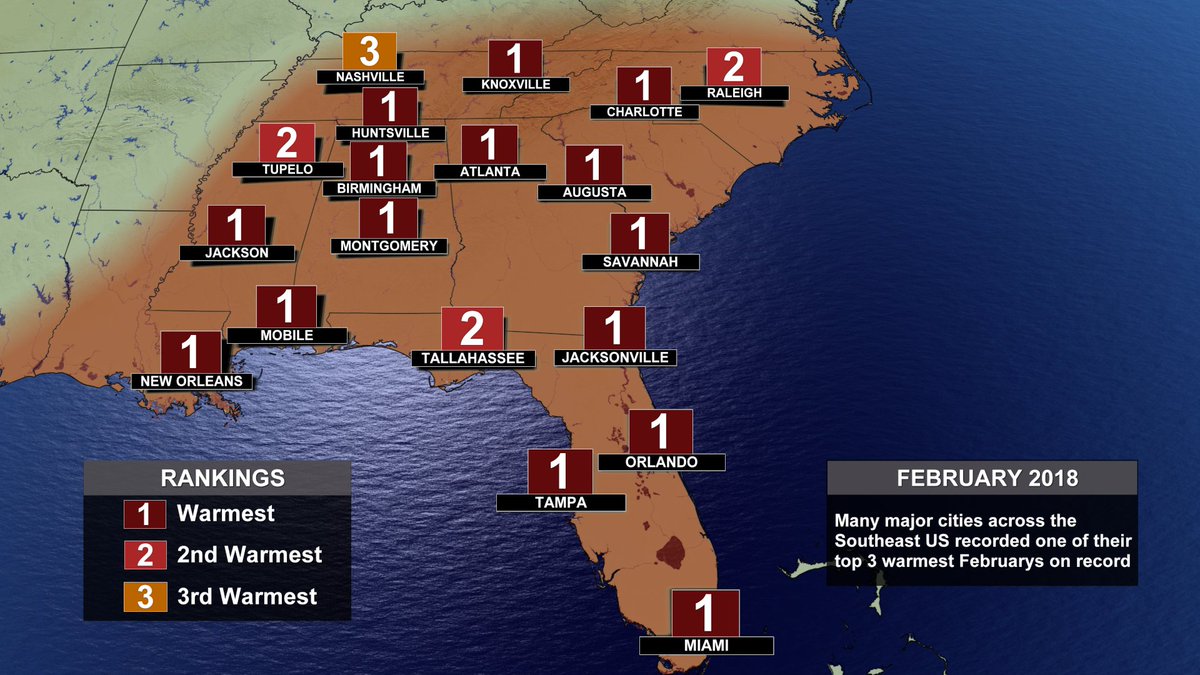 I may add more pertinent information to this post later today.