Today will be the last day in which Florence is the main topic. Don’t you think that a week of tracking old Flo is enough?😉 Actually I will continue to add major news items in association with what is currently Tropical Storm Florence as it begins to move north Sunday through the upstate Carolina region and into the Northeast early this week, but we’ll move onto other topics. Florence on Saturday has moved into a “Harvey” phase crawling forward at no more than 5 mph due to very weak steering currents, a sign of climate  change. The main problem through Sunday, like in Harvey when it reached this state inland, is one word…flooding, and like with Harvey over a wide area this will be catastrophic.

We have seen astounding amounts of rainfall , so far, from Florence, due to relentless rain bands:

Mesmerizing & horrifying — relentless intense rainbands NE of the center of slow-moving #Florence (just like with #Harvey https://t.co/330cAb8U32). 48-hour radar loop starting w/arrival of the rain on Thursday, and with many hours yet to come. #ncwx pic.twitter.com/KusrWMumTl

We have seen astounding amounts of rainfall , so far, from Florence, yet another sign that global warming  enhances rainfall from tropical systems (Added an update for this evening): 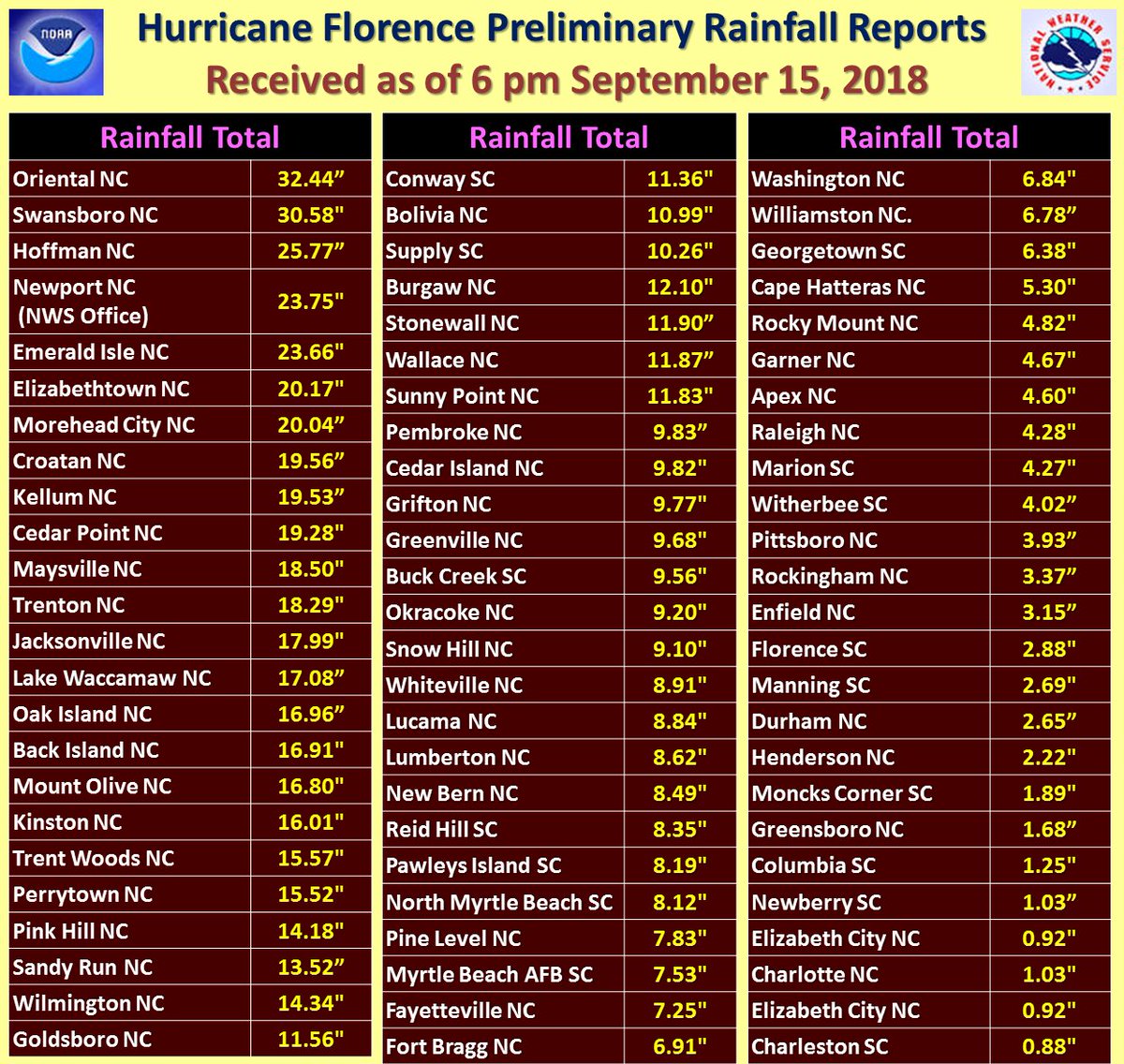 Updated preliminary rainfall reports from Florence received as of noon Saturday.  Heavy rain continues in many of these areas. 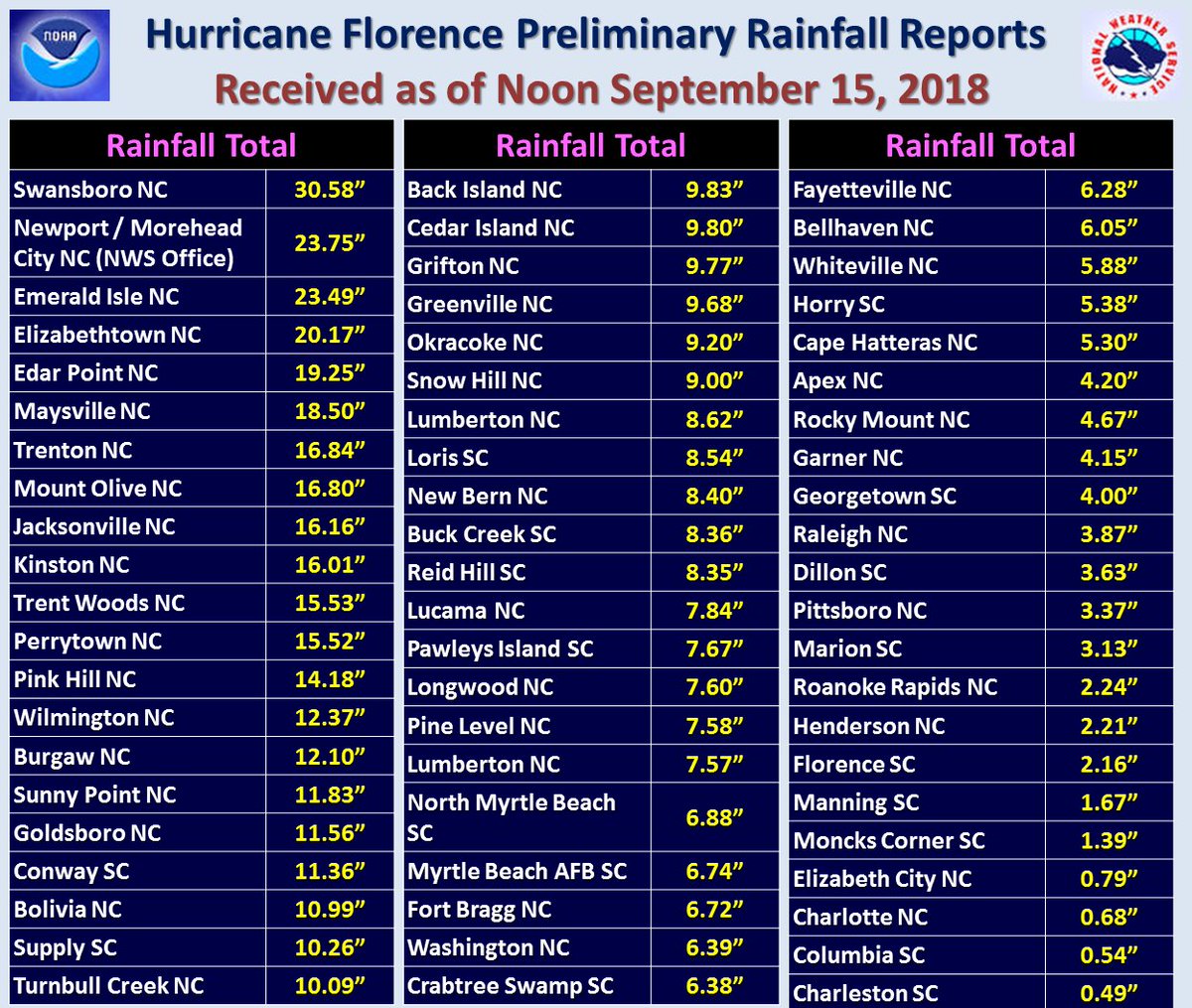 8:17 AM – 15 Sep 2018
Quoting from the Weather Underground Blog:
https://www.wunderground.com/cat6/Dire-Flood-Threat-Carolinas-Florences-Rains-Continue
“Incredibly, the high-resolution HRRR model predicts that 20” or more of additional rain will fall in the period from 8 am Saturday through 5 pm Sunday across a swath stretching north and west from Wilmington (see Figure 2 below). Wilmington received 0.02” on Tuesday, 0.60” on Wednesday, 1.50” on Thursday, and 9.58” on Friday, plus more than 3” through late morning Saturday, so it’s quite possible the city will top 30” for its storm total if the HRRR is correct. Wilmington also has a good chance on Saturday of breaking its all-time daily precipitation record of 13.38”, set on September 15, 1999, during Hurricane Floyd.” 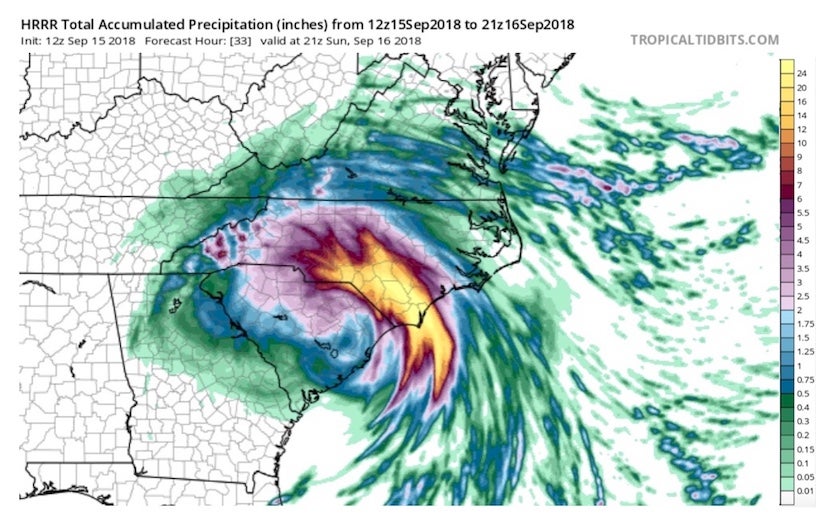 This storm will be a marathon vs. a sprint. In addition to the ongoing, dangerous storm surge and flash flooding, will be a long-term river flood threat WELL INLAND as very heavy rainfall continues to fall in the coming days. Consult http://weather.gov for the latest. 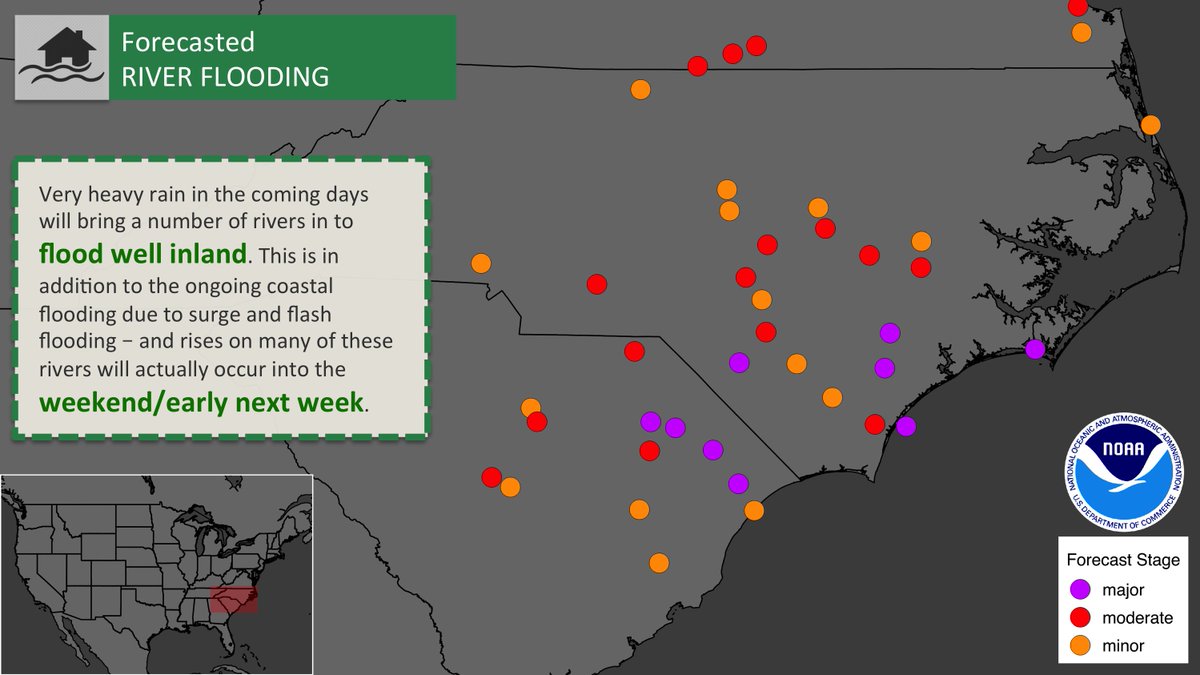 6:03 AM – 14 Sep 2018
Another subtle climate change aspect of Florence not mentioned in some articles is that subsidence from the western end of its circulation has produced some record and near record heat on Friday and will again today:

Little #climate nugget for tonight. Due to hot subsidence on west side of #Florence circulation #Atlanta reached 95F…the warmest reading here since 8/18/2016. We’ve had a couple of mild summers in #hotlanta. 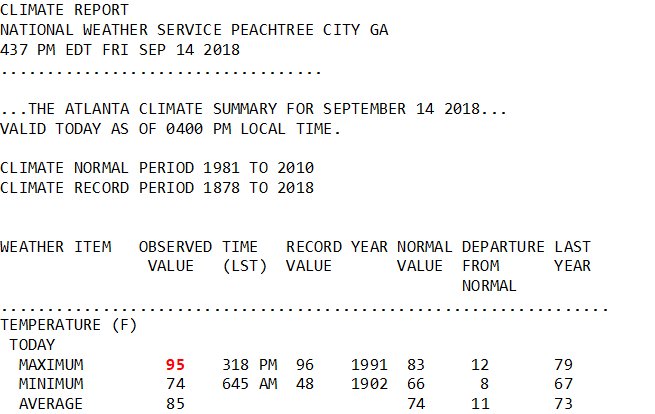 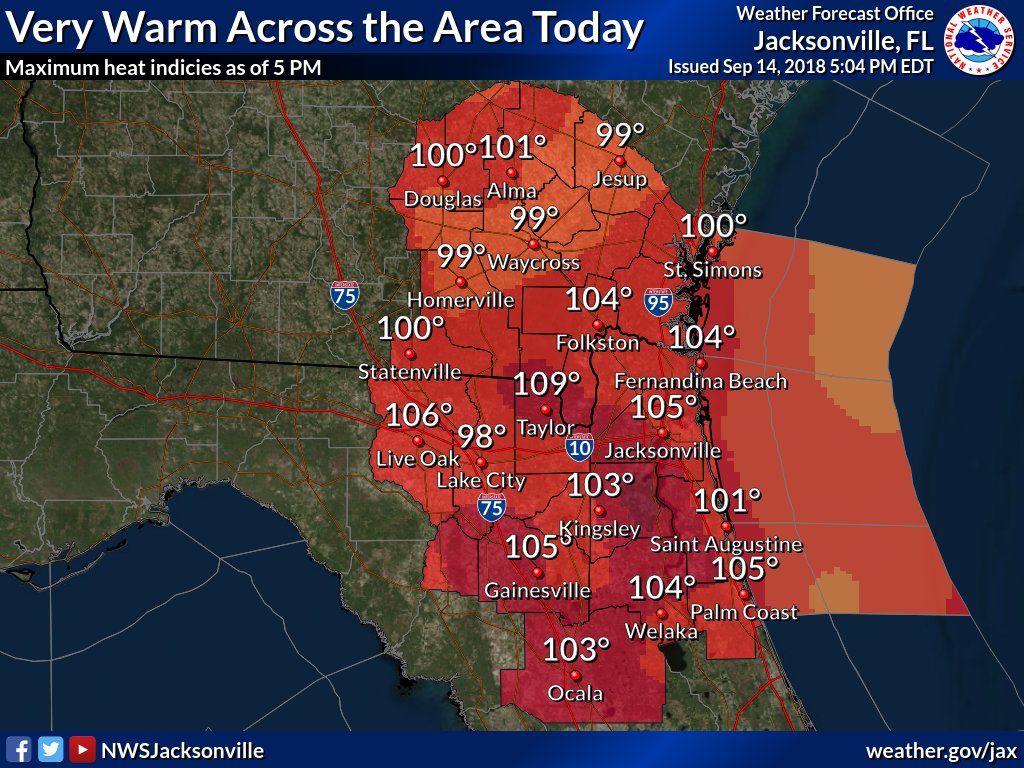 2:12 PM – 14 Sep 2018
The following is my usual list of news items. All will be saved for posterity in this site.
(As usual, this will be a fluid post in which more information gets added during the day as it crosses my radar, crediting all who have put it on-line. Older items are at the end of this list, which will be archived on this site for posterity.)

Quickly growing swath of North Carolina that has received at least 20″ of rain — per Doppler radar estimates. Very concerning since most inland counties have less than 5% of homes with NFIP flood insurance. #Florence 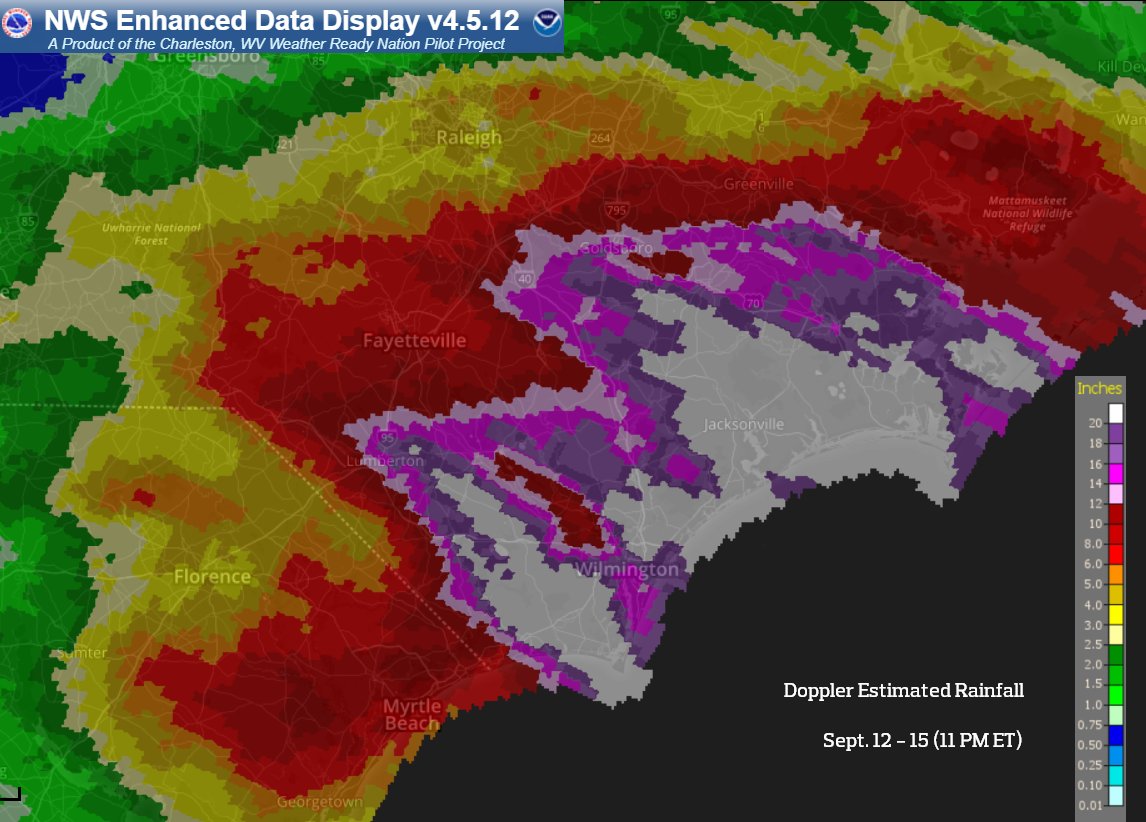 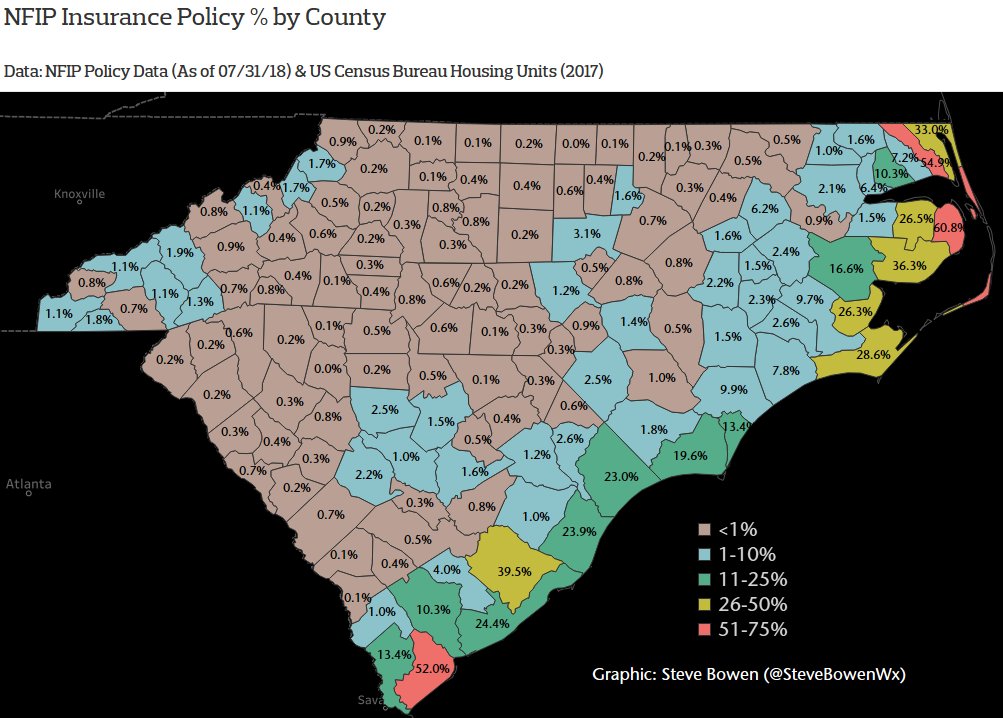 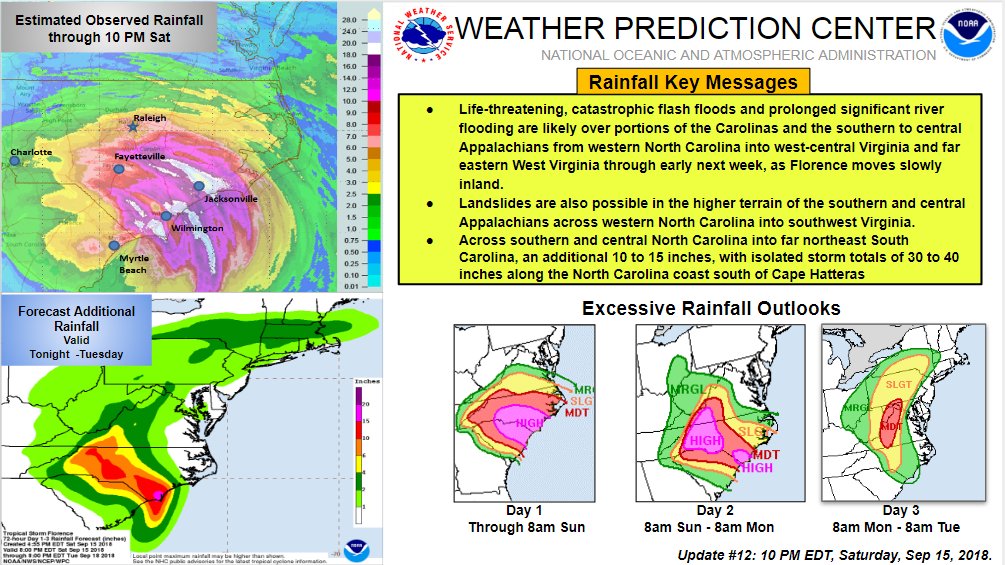 BREAKING: 14 Dead, Nearly A Million w/out Power: #Florence sweeps deeper into NC & DAYS of flooding lie ahead http://ow.ly/ZtaY30lPW64  via @newsobserver 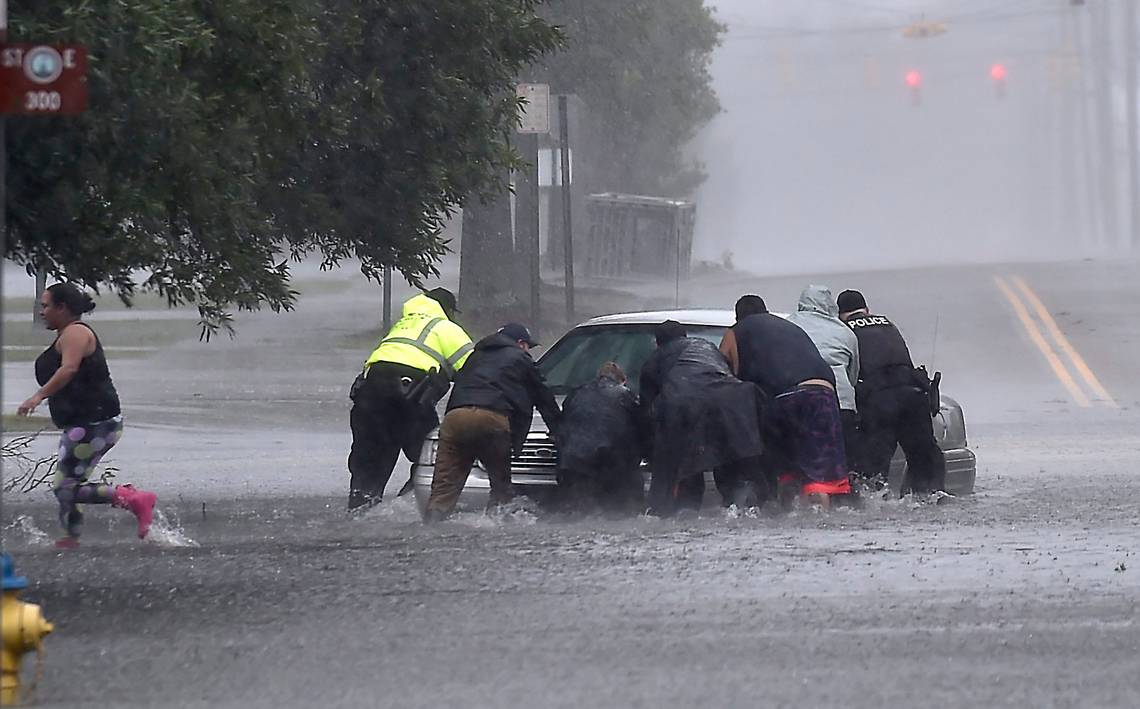 Note: Greg Carbin is chief of the Forecast Operations Branch of the NOAA/NWS Weather Prediction Center, so these strong words are backed up by serious expertise.

Greg Carbin @GCarbin
Over the next 36-hours or so, areas of the North Carolina Piedmont and the mountainous terrain of western NC will experience devastating flash flooding unlike anything in recent memory. Roads and bridges will wash away and damage will be severe. #PDS_Flash_Flood_Watch
7:43 PM – 15 Sep 2018

The jury’s in and sentence isn’t good: an additional foot of rain is en route to much of #NorthCarolina thanks to Tropical Rainstorm #Florence. This could be North Carolina’s Harvey. 30-45” total.These climate-enhanced rainstorms are and will continue to become the new normal. 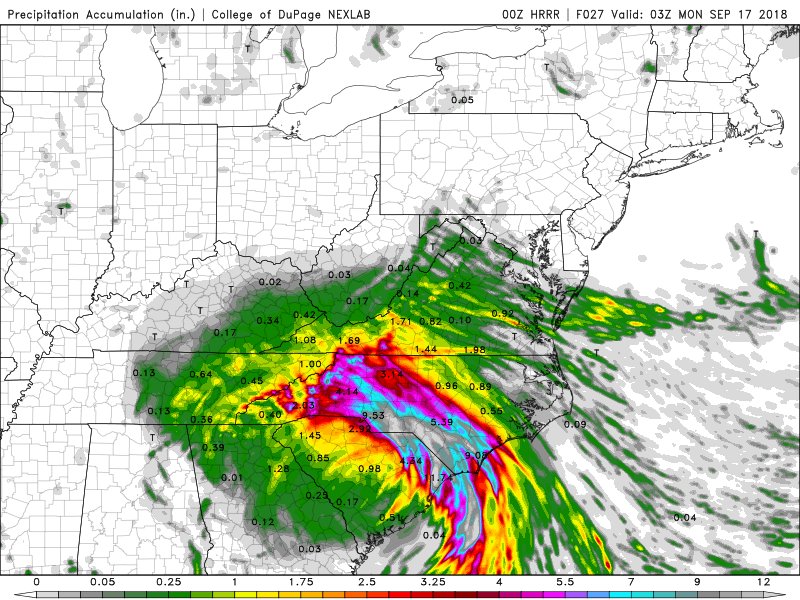 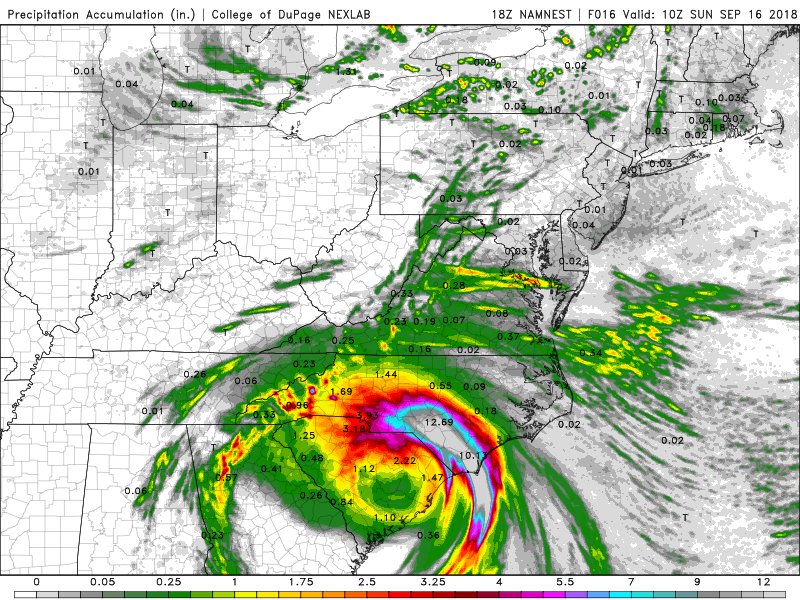 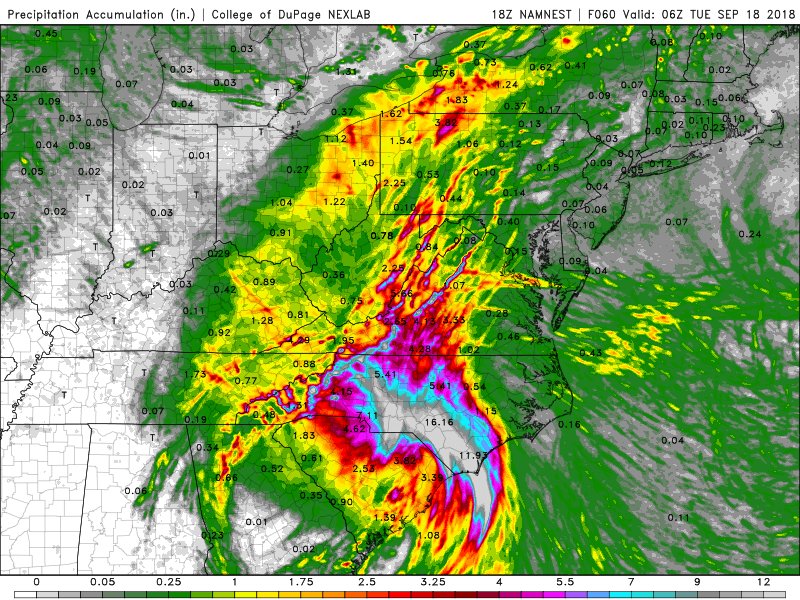 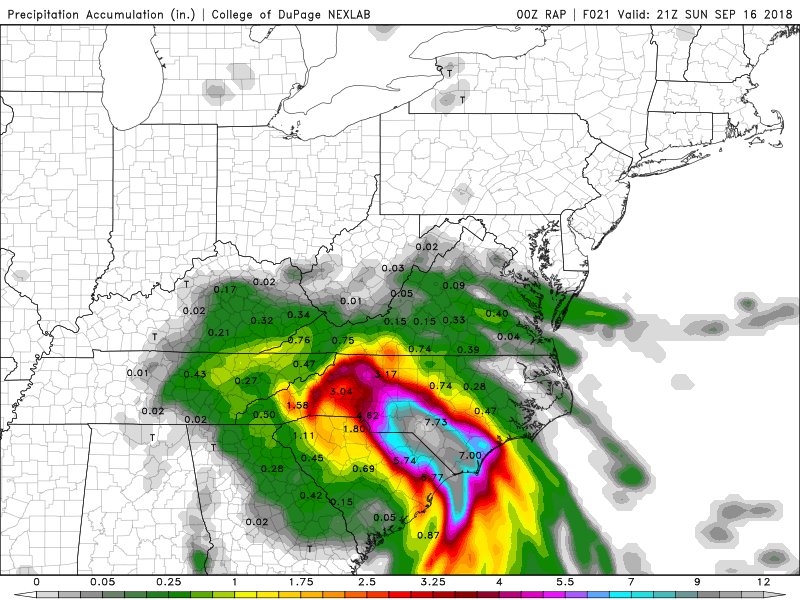 Tomorrow, the convergent zone moves on, aligns with the Appalachians.
We add more convergence, mountain focus, orographic lift, upslope enhancement… and this is going to become a nightmare in the mountains and also down stream of course, prior heavy rain, then more runoff.

Major networks now breaking in on Florence coverage. I think they are finally figuring out how big of a story this is. 30+ inches and more to come. 13 deaths and this sadly likely increases (praying it wont). Towns completely flooded. It is still in the beginning to middle stages 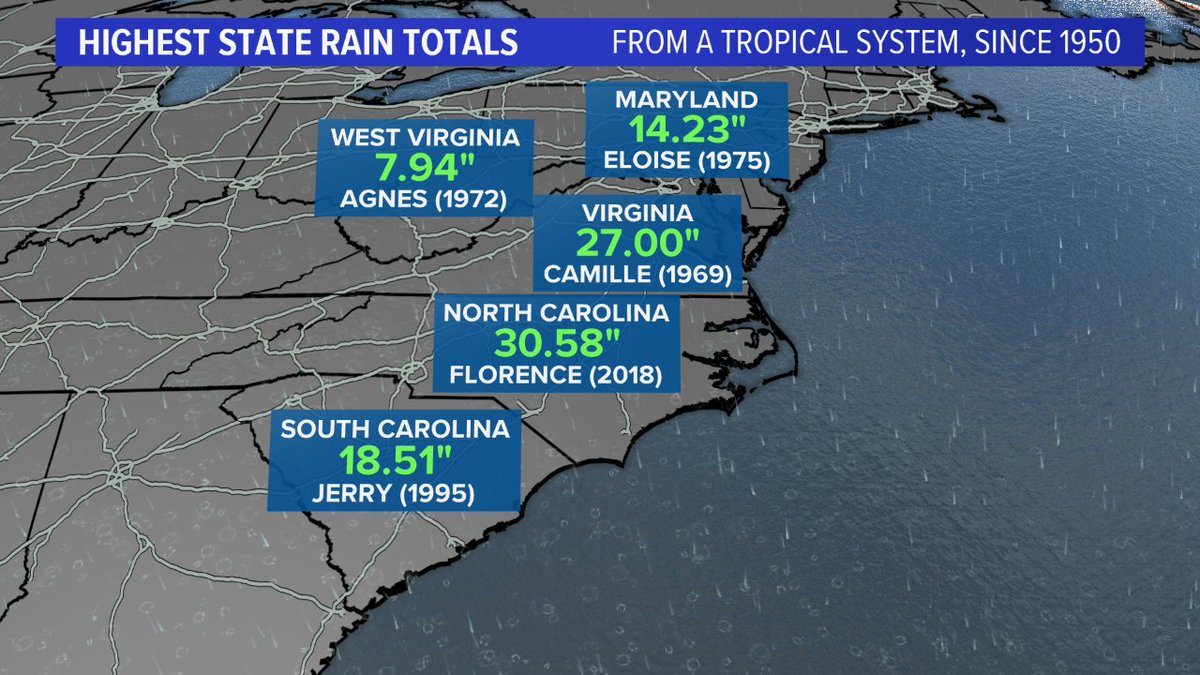 CRAWLING. Tropical Storm #Florence is moving at 2 mph. That’s SLOWER than the average walking pace of a person, which is 3.1 mph.
This near stall means no end anytime soon to the life-threatening flash flooding. #NCwx #SCwx 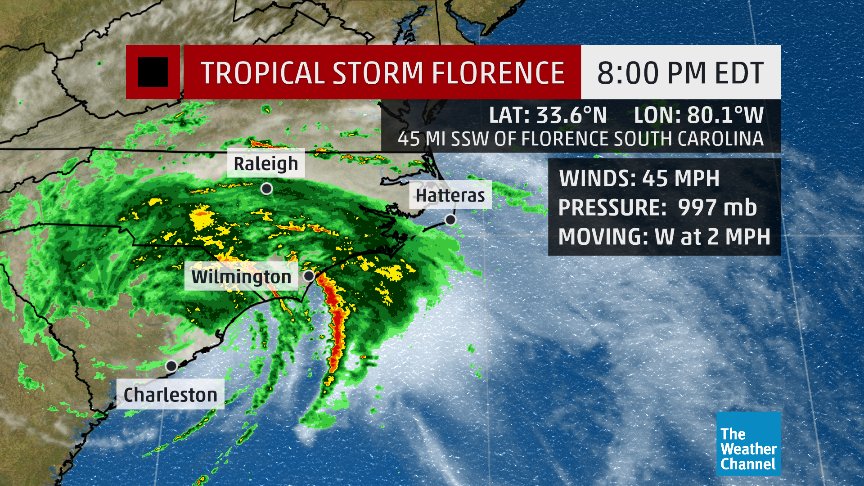 The wording in this Flash Flood Emergency issued earlier… #Florence 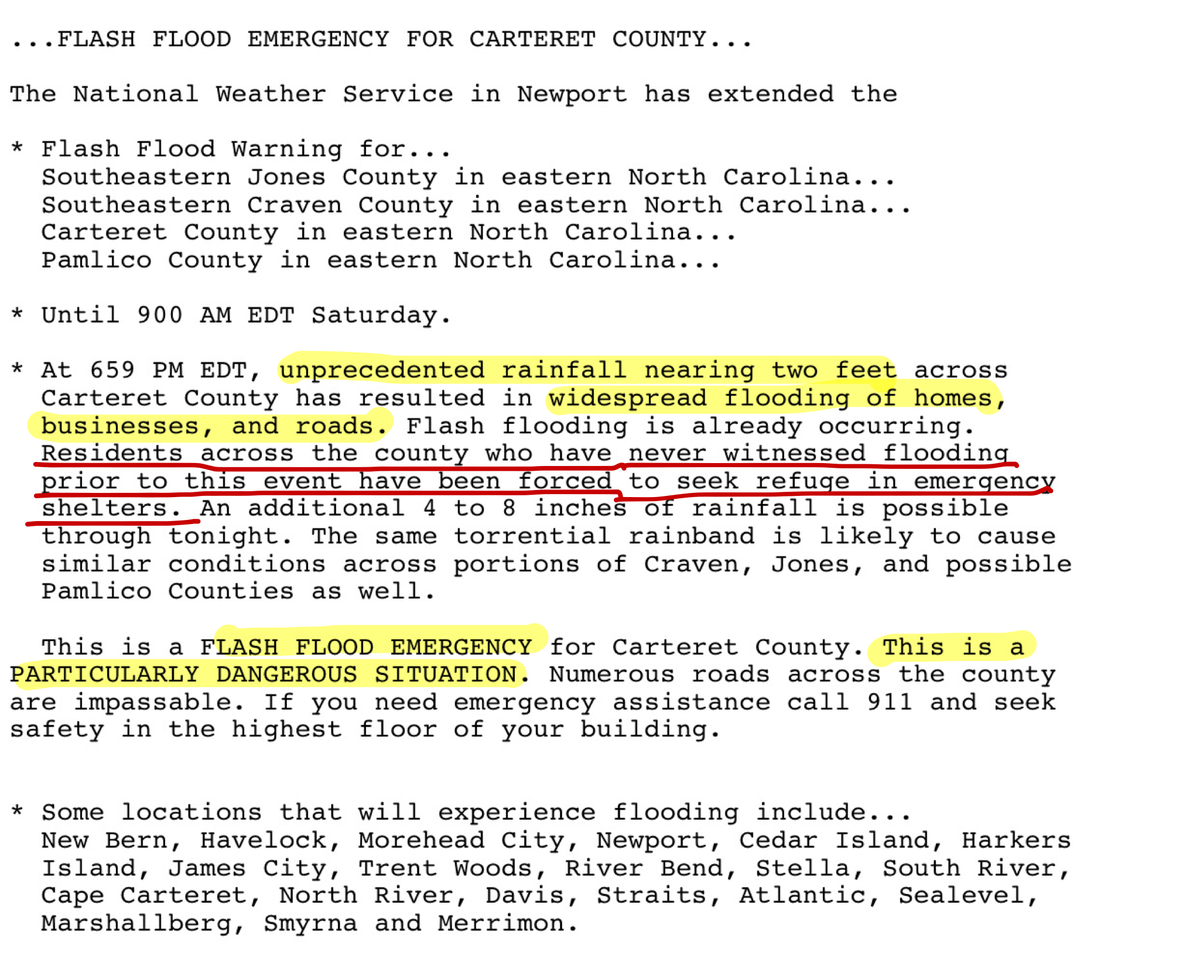 Took a little longer than expected as per last night’s tweeted observations but the process is now unfolding and here comes that next stage of prolific rainfall production. Going to be a VERY long night.
.
Latest Blog from this AM:
http://www.stormhamster.com/entry/e091518.htm…
.

Meet Robert Simmons. Was stuck in his house since last night, when floodwaters began to rise in New Bern. A boat came and rescued him just now. He was sad to leave his father but left with his kitten hugging his neck. Cat’s name: Survivor, Simmons said. #HurricaneFlorence2018 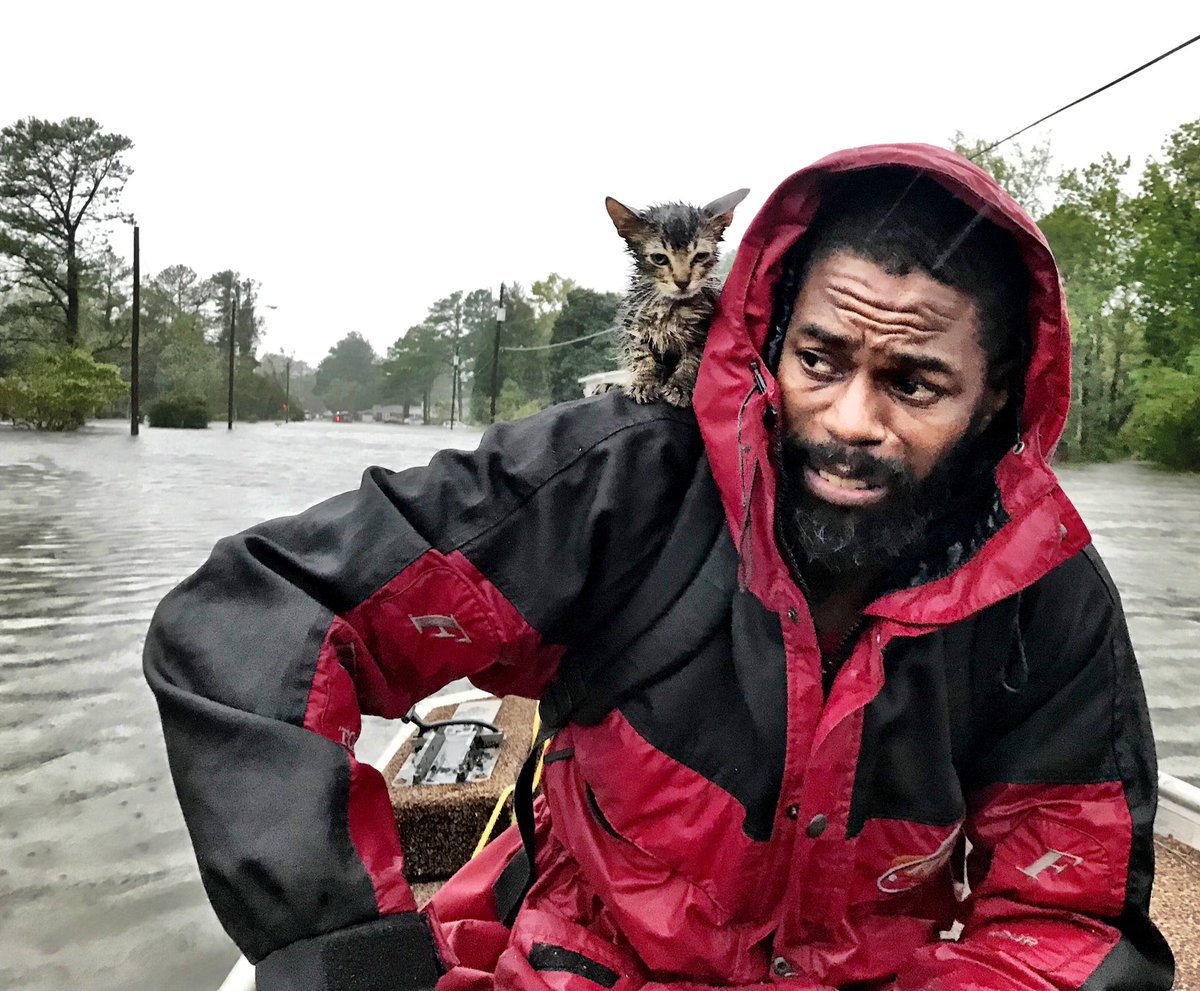 Heard of deer swimming in flood water in Jacksonville,NC!  This is real, we have video if it too on @weatherchannel !!!!! 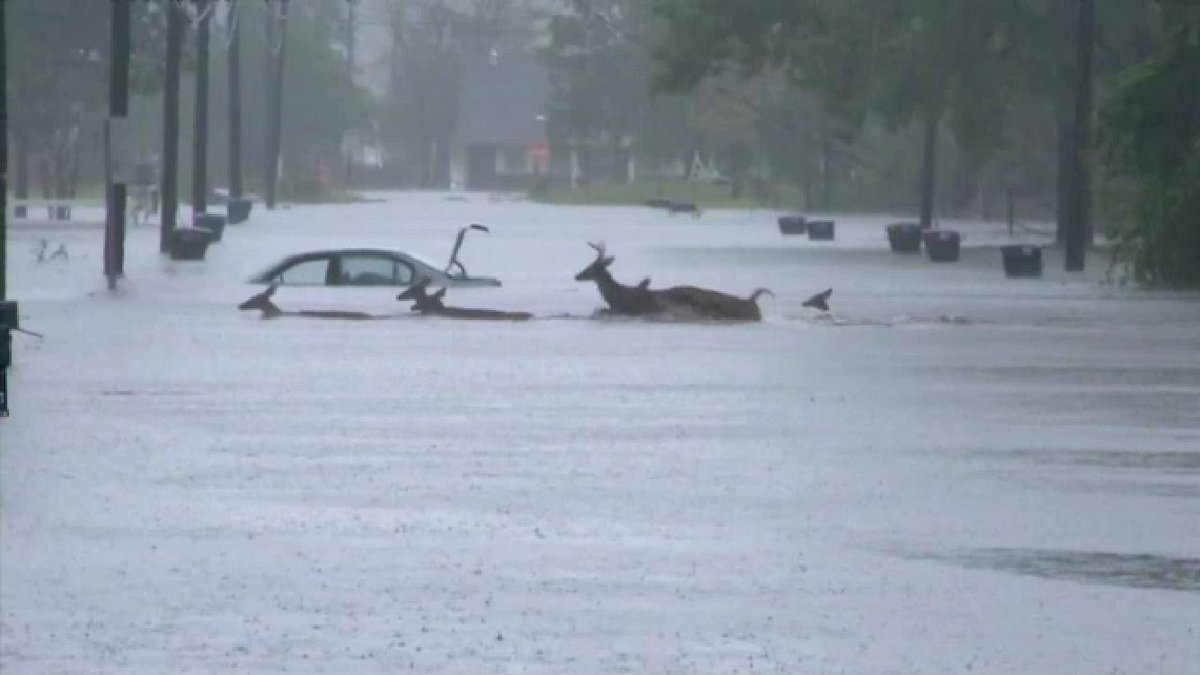 Florence has shattered all rainfall records for the Carolinas. It’s dumping 18 trillion gallons of water–as much water as there is in all of Chesapeake Bay

.@NC_Governor Cooper: The flood danger from storm is more immediate today than when it made landfall 24 hrs ago. We face walls of water. More ppl now face a threat than when the storm was offshore. Flood waters are rising, & if you aren’t watching for them, you are risking life.

.@NC_Governor Cooper: 5 deaths have been reported related to the storm and more are being investigated. Loss of life is heartbreaking. Every hour, first responders are preventing more deaths.

More than 30″ of rain has fallen from #Florence–and it’s still raining–as flood concerns expand west through the Carolinas. Perspective from @JamesBelanger: https://bit.ly/2MyMsYL 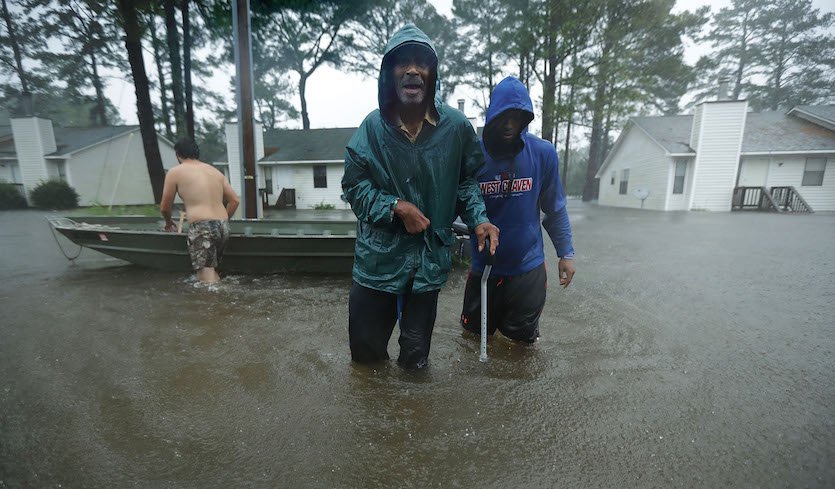